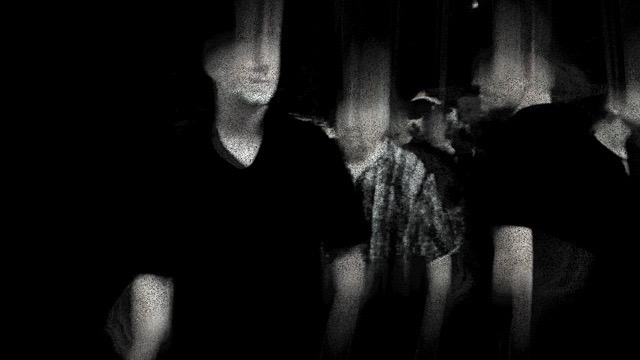 This ain’t no disco: The humans in the Kurokawa/Novi_sad video ‘Sirens’ appear to be at a club or party. Yet something entirely else—and strange—is going on.

Most people who want to see art in Pittsburgh go to the major museums, but fans who are in the know also know about the smaller places that have fascinating exhibits. One such place is Wood Street Galleries in the Cultural District.

Admission is free. And though you get a lot less art than you would at a big museum, a three-hour viewing binge is not necessary in order to achieve a good art high. A shorter trip will do the trick if the art is potent.

The current exhibit (through April 8) at Wood Street is, literally, sensational. The art that’s on display is designed to provoke strong sensations, which it does. It consists of three videos by the Japanese electro-media artist Ryoichi Kurokawa. Now based in Berlin, Kurokawa has a pretty impressive art-world resumé—a showing at the Venice Biennale, ­a prize from the Ars Electronica Center in Austria, etc.—and it’s good to have him electrifying our town.

Powerful as they are, the videos require you to be open to them. They’re not the kind that tell conventional stories about interesting characters doing cool things. For the most part they don’t have “characters” at all; they are the video equivalent of abstract art. So if you step into a gallery for a few moments, think “Oh, this is just a bunch of jumbly stuff with boop-boop noises,” and walk out … too bad, you’ll miss a wild ride.

The ride begins in a tiny elevator. Wood Street Galleries are on the second and third floors in the building above the Wood Street T Station, and I suggest starting on the second, where the two shorter videos are projected.

The viewing space is cavernous and bare. It may also be pitch-dark, where-the-hell-am-I dark if you enter during a quiet part of the video, as I did. Don’t worry. You have not walked into a trap; your eyes are adjusting and there’s plenty to see.

All along one wall is the massively wide and high projection surface. Upon this surface—accompanied by zooming, thudding, and crackling sounds—unfolds the piece that Kurokawa calls unfold.alt. According to his artist’s statement, it simulates galactic phenomena such as “Molecular cloud, Massive star impact … Protostar formation … Supernova, Gravitational collapse, and Neutronstar.”

But what do artists know about their own work? Let me tell you what unfold.alt looked and felt like to me. The following is deciphered directly from notes that I scribbled amid the flashes and thunder:

“Cubes, grids, pixellated forms. Volcanic 3-D surfaces. A bean shape turning into a cocoon, an embryo, a gem … Neural-network patterns. 3-D illusions that suck you in. Brief flashes of pure ecstasy [emphasis added] … A boiling eruption. The sensation of shifting from macroscopic to microscopic views … It’s really something.”

And whatever that “something” is, it got me tingling, on a primeval level. Maybe it’s a metaphor for the emergence of life and matter, or maybe you will think it’s something else. The video clip below is only a small-screen sampling of excerpts from a piece that lives extremely large, for about eight minutes. You have to experience unfold.alt in person to be truly initiated.

(This should be viewed in full-screen mode with sound up):

The Geometry of the Senses, the ‘Sirens’ of Doom

In a chamber behind the unfold.alt space is another short piece, constrained surface. Here, pure geometric forms—often in vivid colors—morph and mutate on a pair of canted screens, each about the size of a hall mirror. Again, there’s an electronic soundtrack.

Quoting from Kurokawa’s statement for constrained surface, the piece is meant to induce “synaesthesia … a condition where a sensation in one of the senses triggers a sensation in another … where [for instance] one may taste numbers or hear colors.” He says the piece also explores “the surprising possibilities of what can be experienced within the boundaries of a frame.”

I found constrained surface to be delightfully clever. It didn’t move me emotionally, the way unfold.alt did, but it moved me to elevator on up to the third floor in a mood of high receptivity to the final piece in the show.

The final piece, Sirens, is a collaboration: a Kurokawa video with sound by the Greek sound artist Novi­_sad, a.k.a. Thanasis Kaproulias. Like unfold.alt, it displays in epic proportions on a gigantic surface.

I would call Sirens a knockout, except it’s not that quick. The piece runs more than a half-hour, so the impact is more like a TKO accumulating over several rounds. Should you think “That’s a long time to watch morphing forms n’at,” take heart: This video has recognizable images—including people, a cityscape, and creatures such as a majestic elk, a bird of prey—even a giraffe.

Sirens is an apt title. Like the enchanting women of Greek myth, the Sirens who lured sailors to their death, the piece is tantalizing … and eventually, it gets you. The people, animals, and so on are continually distorting, dissolving, and transmuting into, well, something else.

The sensations are always strange and sometimes actually frightening. For instance, the humans are spectral: they have no eyes (that is, the images are fudged to wash away the eyes), and their heads keep flaring up into bizarre cone-heads or Ku Klux Klan hats. Novi_sad’s synth music sounds, at times, like an eerie blend of violins and mournful horns …

Oddly, the artists’ statement for Sirens says it explores or is inspired by “the aesthetics of data”—in particular, stock-market data, which “fluctuates as in relation to the unfolding of an economic downturn.” This is perplexing. I struggle to recall any financial or investment-related feelings that the piece might’ve given me, and cannot.

But I liked Sirens, whatever it may mean. And I’ll close with a rumination on the roots of Kurokawa’s work.

Where We Came From and Where We’re At

This sort of art has been evolving for a long time. Before the age of video, there were filmmakers like Maya Deren in the 1930s and ‘40s. She’d film scenes that were staged in the real world, but with the camera often focused on the interplay of shapes and patterns and movements. The idea that motion pictures could look like abstract art in motion was in the wind, and others took it further.

Kenneth Anger’s Eaux d’artifice is a classic experimental film from 1953. It was made at an old Italian villa that has vast “water gardens” with hundreds of fountains, manmade waterfalls, and cascades. Anger filmed there at night, using lights and filters to accent the dancing sprays and streams of water—and a lot of the effects are strikingly similar to those in Kurokawa’s present-day pieces.

Advances in video and computer technology made it possible to do much more tinkering with real-world images, or to generate your own imagery from who-knows-where. Somewhere in my files is a DVD copy of an astounding but virtually unknown piece, made by a renegade electrical engineer in the late 1960s. Nothing in it resembles anything you’d see in everyday life on Earth. Yet it’s profoundly moving, because it seems to be channeling the pulses of elemental thoughts and emotions straight through the optic nerve.

And here we are today. We have more artists using more powerful technologies than ever. If the old monkeys-at-keyboards analogy holds true, does this increase our odds of getting electronic-art Shakespeare?

Hard to tell. Much of the electro-art we see is ‘way better than just random smoke and mirrors, but not knock-your-socks-off, speaking-to-the-ultimate-truths-of-the-heart genius grade, either. As one would expect from the laws of probability, nearly all of it is distributed across the immense ranges in between.

But as Shakespeare himself wrote, comparisons are odorous. Let’s simply say that the pieces by Ryoichi Kurokawa and Novi_sad are really good. I recommend them heartily.

The untitled exhibition of videos by Ryoichi Kurokawa and Novi_sad can be seen through April 8 at Wood Street Galleries, 601 Wood St., Cultural District. Gallery hours are Wednesday and Thursday 11 a.m.- 6 p.m., Friday and Saturday 11 a.m. – 8 p.m., and Sunday 11 a.m. – 5 p.m. (Closed Monday and Tuesday.) The venue is operated by Pittsburgh Cultural Trust, and admission is free. For more information, visit the Galleries’ website or call 412-471-5605.

Still frame and video excerpts of Kurokawa’s work, courtesy of the artist.