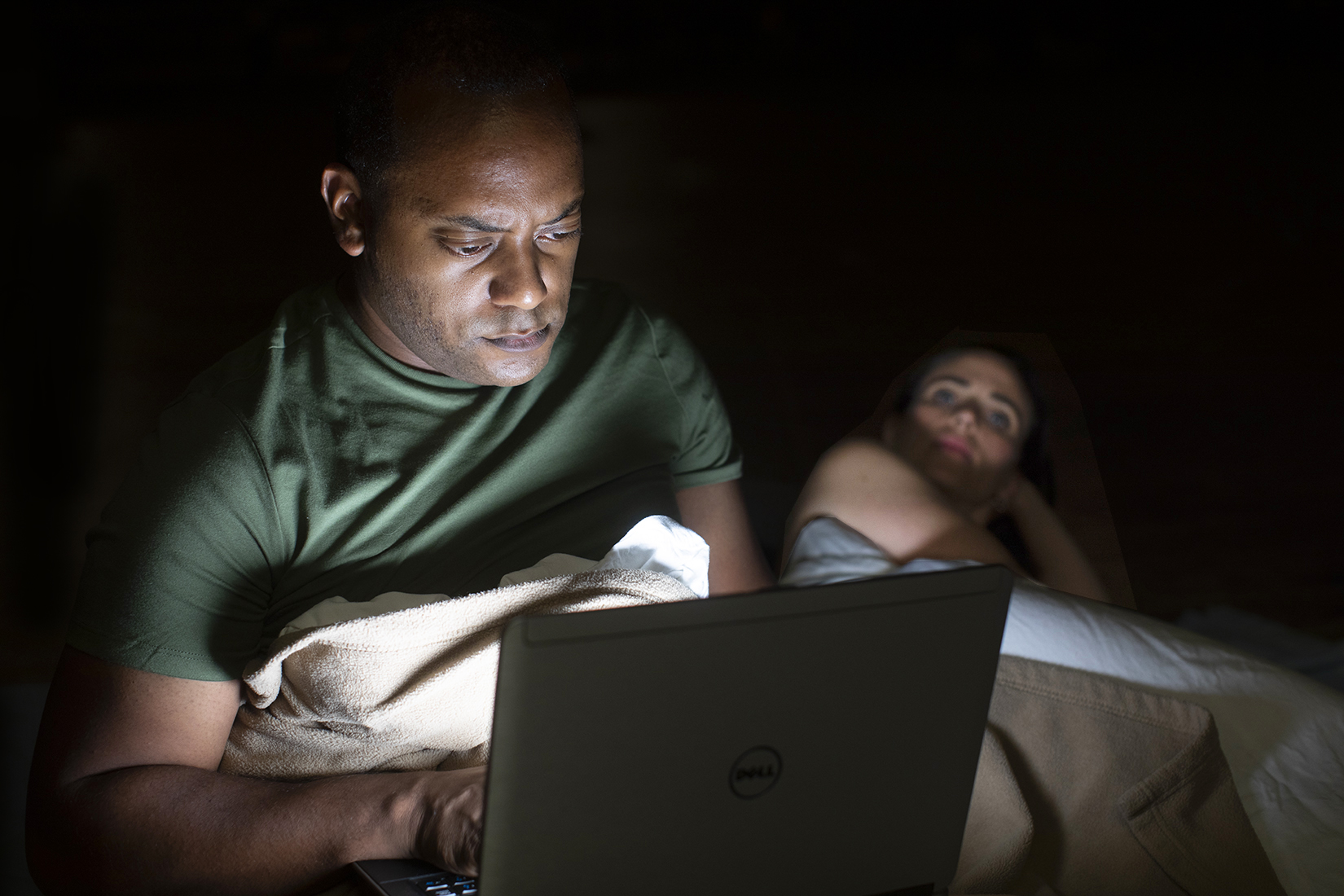 In Greek mythology, the Chimera was a multi-headed monster. Lucy Kirkwood’s play Chimerica depicts the world’s two current superpowers, China and America, as a multi-headed monster. Quantum Theatre is staging Chimerica in Pittsburgh through December 19. During the holiday shopping season, amid the mass-market madness that is one of the monster’s manifestations, this reviewer would urge you to step away and see Quantum’s production—for reasons that might need explaining.

The play will not give you a holiday high. No miracle will turn Scrooge into a saint or save Tiny Tim. Chimerica is more like an epic tragedy: a hard-edged saga in which people clash with each other, and with massive systems, sometimes risking fatal outcomes, to little avail. The central characters go looking for trouble, find plenty, and wind up creating more. Comical moments abound, but they tingle on the edge of tragicomedy.

And yet surprisingly, Chimerica feels inspirational. Perhaps this is because it isn’t a gloom-and-doom play, just realistic. It’s a story of imperfect people trying to do their best in a couple of imperfect societies. If you cannot relate to that, I would like to meet you and join your Utopia. Otherwise, try this play. In its majestically muddled scope, it somehow—through the magic of theater—manages to evoke the sense that each of us has the possibility of living heroically. In our own imperfect ways.

Who Was That Man?

Chimerica is an imaginary sequel to a true incident. At the end of the Tiananmen Square protests in Beijing in 1989, a man stood in front of a column of army tanks to block their progress. Photos of “Tank Man” by an American journalist became iconic images, seen worldwide as symbolizing heroic defiance to brutal authority. But here’s the rub. Tank Man was not a symbolic action figure. He was (is?) a person, with a personal life. Two facts about him remain unknown to the public: his identity and what became of him, after he’d vanished into the nearby crowd.

The play unfolds decades later, in 2012. The American photojournalist, a guy named Joe (played by Kyle Haden), returns to China on an assignment. When he visits a friend, a quirky fellow named Zhang Lin (actor Hansel Tan), their lively chat leads to tangled consequences. Joe resolves on a mission. He’s going to find Tank Man or learn his fate. Zhang—who was at Tiananmen Square in ‘89, among the protesters—suggests that Tank Man might be in America, where some of the organizers fled. And then we’re quickly plunged into a sea of conflicts, both interpersonal and intercontinental.

Joe’s motives are mixed. Locating Tank Man would be a big story, he believes. It would put a human face on the symbol while also rebooting Joe’s career, which has settled into run-of-the-mill mediocrity since he snapped the famous photos. But the mission requires digging into New York’s Chinese immigrant community, trying to wrangle clues out of people who may or may not have real IDs or legal status themselves, and are not eager to share info about a refugee who, understandably, doesn’t want to be found. Many lives are upset by Joe’s quest. 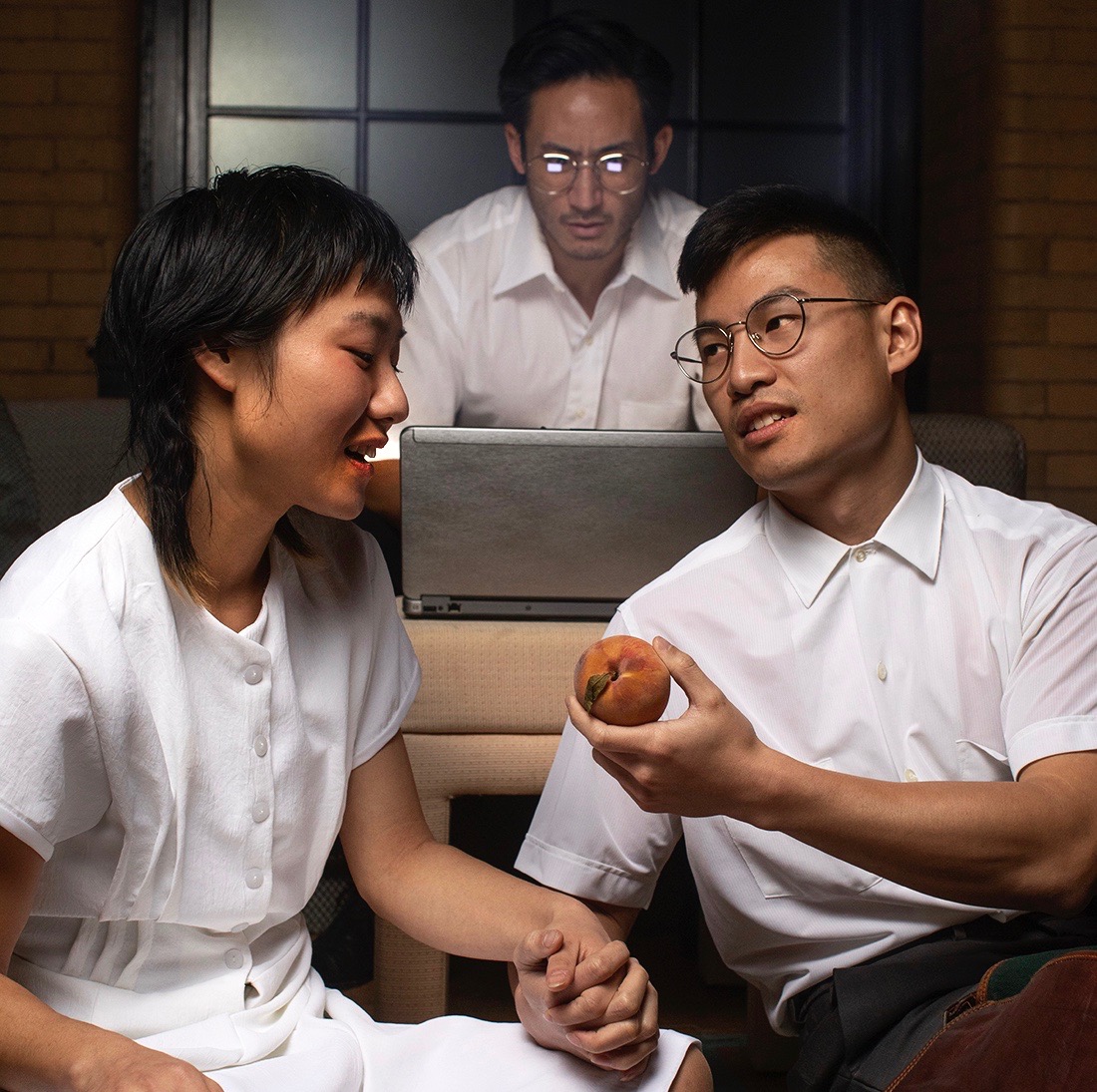 Meanwhile in China, the plot thickens. Behind the gregarious face he presents to others, Zhang Lin is a desperately lonesome man, grieving over the young wife he lost years ago. (Gradually, through flashback scenes, we learn what happened.) So Zhang decides to give his life new meaning by raising a stink about a public issue that the authorities have downplayed. Surely this will incur the government’s wrath. But somebody has to speak up, don’t they?

Dancing Elements, the Search for Significance

Back and forth we go. Complications and ironies multiply, mixed with stunning revelations. Joe, for instance, finds a man who shows him who the “real hero” of the ‘89 protest was. Not Tank Man. Just an obvious person no one had guessed. But Joe still doesn’t have the story he wants, nor can he gain much ground pitching the idea. In America, even the news is a market product, and Joe’s boss does not think the story will sell.

A striking element of Chimerica is how it dances between two cultures, the Chinese and American, as well as between two levels of life, the sociopolitical and the personal. On the first level, we’re shown societies built around moral compromises: China has traded democracy for economic progress, as one character observes, while in America we’re free but the corporate/market mentality runs amok.

The personal level is explored in fine shadings—admirably so, given how many characters are in the play. Everyone seems to have dueling inner agendas, and many struggle to see how their little lives fit into the big picture. Joe muses that his life’s work has become a commodity, as zillions of kids with smartphones can take photos equal to his: “Maybe photographs are like people. The more there are, the less any one means.”

In a play filled with meddlesome men, two women stand out. One is Tessa (played superbly by Alison Weisgall), a British market researcher who has been hired to study Chinese consumers and categorize them into purchasing demographics. En route she gets into a love affair with Joe. Sparks fly from that pairing, and mostly they fly from Tessa. Despite her commercial day job, her real gig is getting to the heart of the matter.

Tessa’s concise warning to Western CEOs who think their companies can make an easy killing in the Chinese market: “China is not the drunk girl at a frat party. She’s the business major with an A-plus average and really great hair.” But at the same time, she sees peril in China’s rapid economic growth: “This is a nation that’s gone from famine to SlimFast in one generation,” and “That’s not a safe speed to be moving at.”

The language of Chimerica is marvelous. Often it spills out in tight, colorful cadences that verge on being rap-like, as when Zhang chastises Joe for thinking he understood what Tiananmen Square was about. “You were up in your hotel room,” says Zhang. “Taking pictures. Behind your camera. Plane ticket in your pocket. I was there. Down there, in the Square. Bullets the size of your thumb. Dum-dum. They open up inside you …”

Along with the music of the words, actual music is provided by another strong woman in Quantum’s cast, performer Mimi Jong. For interludes between scenes she plays haunting melodies on the erhu, a Chinese stringed instrument that ought to be part of the American repertoire. Jong also stands in as an actor, playing a couple of no-nonsense female characters who remind the men that “Women hold up half the sky.” 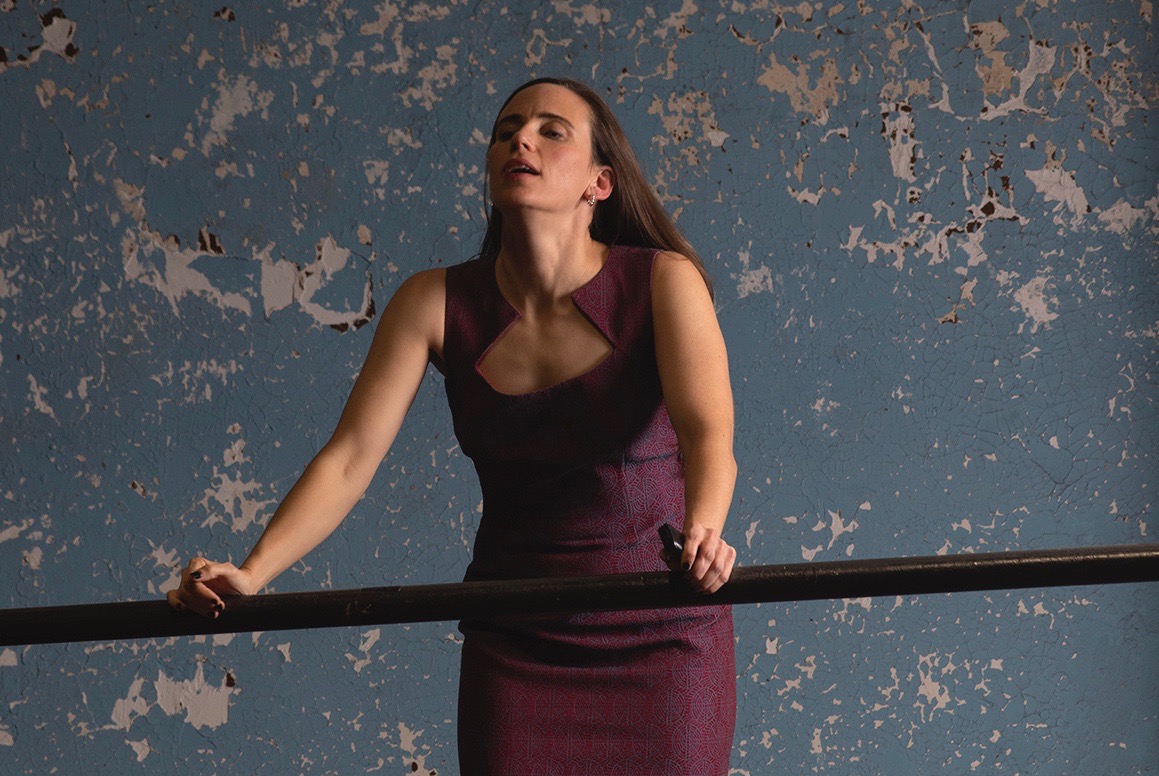 Do you want the truth and can you handle it? Tessa’s research findings fly out the window so her real voice can speak.

Out from that sky, the closing scenes of Chimerica come rolling like thunder. Tessa goes rogue in her business presentation on the Chinese consumer market, turning a dry speech into an off-the-rails masterpiece. Zhang and Joe shudder shockingly to the conclusions of their respective crusades. A number of loose ends don’t get tied up; they get splayed wider and looser, leaving room for interpretation. And room, just maybe, for hope.

Would it be stretch to call Chimerica a love song to an imperfect world? In my view, the label fits. The love of the playwright, Lucy Kirkwood, comes through in the care with which she wove layers of meaning and shades of nuance into the script. The love of Quantum’s cast and creative team sings out in their powerfully human performance of the play. It’s a gift. The gift of good theater. Allow yourself to receive it.

Kirkwood’s Chimerica premiered in London in 2013. Karla Boos, Quantum Theatre’s artistic director, assembled the large and diverse team needed for such a production. She directs the play here, with art direction by Susan Tsu. Visit Quantum’s website for tickets and Covid-precaution info. Through December 19 at The Maverick Hotel, 120 S. Whitfield St., East Liberty.