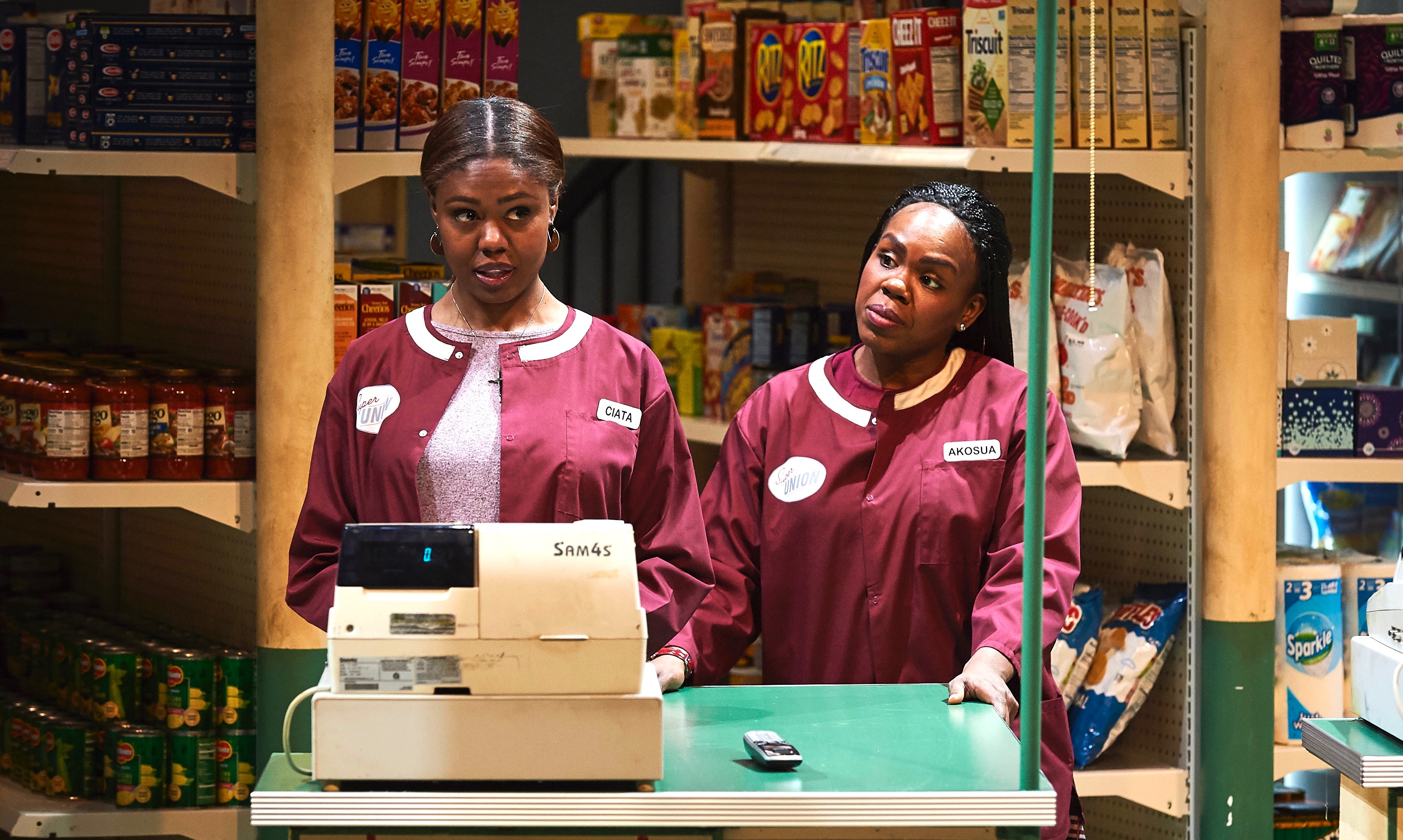 What’ll you have? A better future, maybe? Ciata (Shamika Cotton, L) and Akosua (Ngozi Anyanwu) check out the prospects in ‘Citizens Market.’

Citizens Market, by New York playwright Cori Thomas, is in its world premiere run through March 25 at City Theatre. The company’s niche in the Pittsburgh theater scene is staging notable new plays that haven’t yet been seen here. Many are recent award-winners or shows generating buzz elsewhere—but some are first-ever productions of work by writers outside our local area, and this one is the second by Thomas to get the nod. (Her When January Feels Like Summer was produced in 2010.)

City Theatre also strives to put on plays that deal with timely themes and reflect the diversity of our society. Citizens Market fits the bill on those counts. It’s a comedy/drama about people who’ve been in the national spotlight lately: immigrants.

Jesus and His Amazing Technicolor Supermarket

The setting is the Super Union, a fictional indie supermarket in a Manhattan melting-pot neighborhood. Running the place is one Jesus—pronounced the Spanish way, Hay-SOOS, please, though his non-Hispanic employees often slip and call him “Jesus.” The character’s name is probably no coincidence, because he’s indeed a savior, of sorts.

Jesus (played by Juan Francisco Villa) lifts his lamp beside the golden door of gainful employment. A Salvadoran immigrant himself, he hires new arrivals from all over. When the play opens he’s interviewing Akosua (Ah-KO-sua, acted by Ngozi Anyanwu), a young woman from Ghana.

Comical crossfire peppers the interview. While Akosua tries to sell herself despite not having retail experience, Jesus breaks in to say that she’ll get a shot—if she can channel her eagerness into efficiency. The boss man shows how the Super Union should run when the checkout lines are full of customers: “They have to keep flowing, like a river … Next! Register one! Next! Register three! … Quick quick quick!”

Jesus warns repeatedly that he’s a “tough boss.” Which, of course, tells you he’s got a soft heart inside. And affairs of the heart come to the fore as the plot thickens.

Akosua, we learn, left Ghana when the man she thought was her one-and-only proved to be a two-timer. She confesses this to veteran employee Ciata (Shamika Cotton), a Sierra Leonean woman with heartbreak in her own past and a touchy situation in her present. Jesus has a major crush on Ciata. She hesitates to reciprocate—and meanwhile, two Romanian immigrants enter the picture. 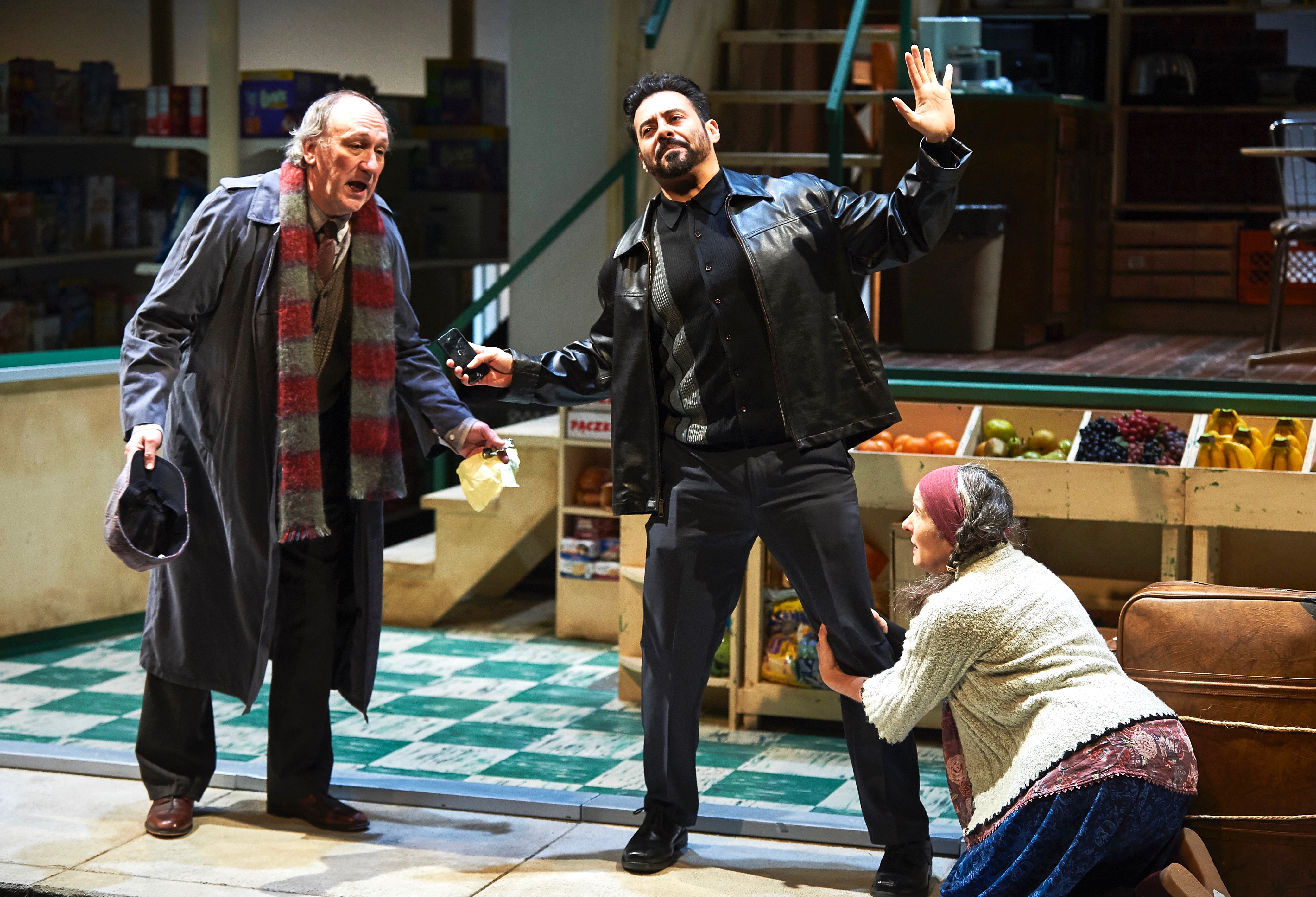 Bogdan (Jeff Howell, L) and Morfina (Ann Talman) beg for succor, and you know what Jesus (Juan Francisco Villa) would do.

Bogdan and Morfina (Jeff Howell and Ann Talman) are an elderly couple who bicker constantly. Once they were in love but now they’re in dire straits, crashing at a nearby homeless shelter. It seems that Bogdan, an imperious fellow, lost his nice engineering job after comparing the chief engineer to a bodily orifice. You can imagine how Morfina feels about that, though you may not imagine the volume at which the two argue.

Blessed are the peacemakers! Jesus finds the haggard couple haggling on the sidewalk, then takes them into the Super Union as interns. Akosua picks it up from there, assuming the persona of a wise village chieftain in Ghana to mediate between the volcanic Europeans. Can their dormant affection be re-kindled? Will Ciata let Jesus into her heart? And what about that guy Akosua left behind?

Thus, Citizens Market lays the groundwork for paths to a happy ending. It doesn’t all come up roses. Tragic turns and difficulties intervene. But although America isn’t always good to these people, they’re good for America. And it’s time for a look at the kind of play we have here.

Too Good to Be Really Good?

Along with being a view of the immigrant experience, Citizens Market is a workplace play. Workplace comedy/dramas have become a staple of modern stage and screen. They range from August Wilson’s Jitney, set in a jitney station in the Hill District, to TV series like HBO’s “The Office,” to the hot new musical Waitress. 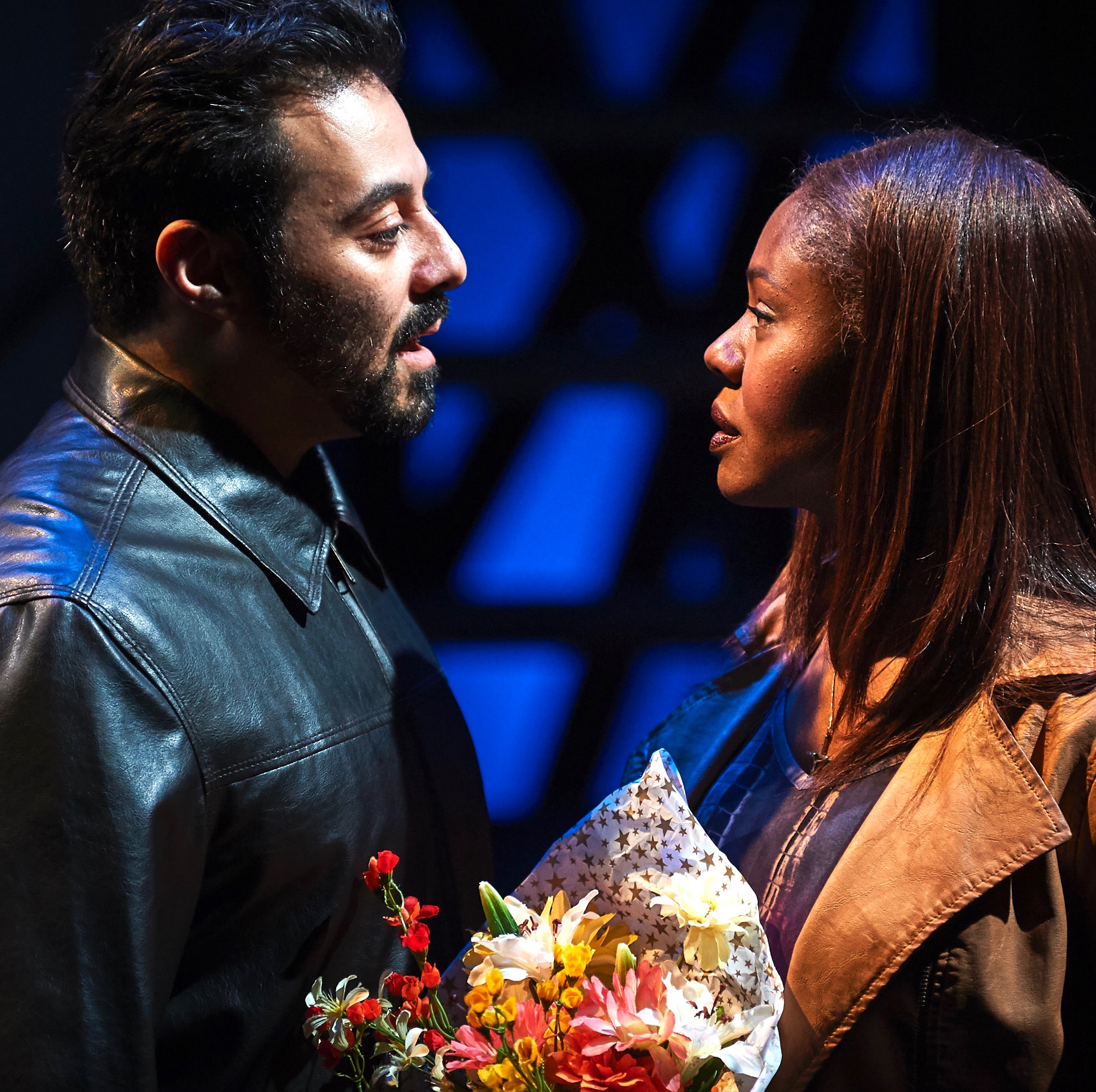 The format is popular for obvious reasons. Our lives revolve around work (maybe too much). Plus, workplaces are fertile grounds for writers to spin stories in. They bring together various types of people, including strange bedfellows, so they’re places where all sorts of human business other than the actual business are liable to unfold. A writer who gets a good thing going in a workplace setting will have a crackling set of intertwined story lines that really connect with the audience.

And I wish I could say that Citizens Market connected with me more than it did. I am passionate about the causes of immigrants, having grown up in a blue-collar immigrant neighborhood, in a home where English wasn’t the only language. Ever since then I’ve lived, worked, and played with immigrants from many lands (including Ghana) and felt lucky for the opportunities.

So then, what’s the deal with this play? That is hard to put a finger on. I found it too predictable in some ways, too far-fetched in others, and—an odd adjective to be using, in this context—too uniform. The characters all turn out to be so darn good.

I would argue that in real life, immigrants are, on average, better people than average. I would argue that this tends to be true along numerous dimensions of goodness. Still, it left my aesthetic senses cold to see the play give everyone hearts of gold.

Watching Citizens Market, I longed for a succulent villain—a wolf in sheep’s clothing, out to lead this flock astray. Or for an engagingly weird character—one with obsessions and beliefs that seem extreme, and yet somehow ring the bell of truth, or at least the chimes of empathy. (Wilson’s plays have such characters. So do workplace plays like Samuel D. Hunter’s A Bright New Boise, set in the employees’ lounge at a Hobby Lobby in Boise, Idaho.)

Perhaps because I’m a guy, the Citizens Market character who intrigued me most is Jesus. He has layers of personality that come back to bite him. While giving tough love to his staff, he’s a raging New York bull on the phone with his suppliers.

At one point Jesus f-bombs the living shit out of a distributor who sent the wrong order, and practically dares the man to catch him employing any illegals. A bit later the authorities discover that somebody at Super Union doesn’t have proper papers after all. Guess who.

There are positives in Citizens Market. The cast is an all-star team. Anyanwu, herself a rising playwright (last year’s The Homecoming Queen and others), more than pulls her weight as Akosua. Cotton, Howell, Talman, and Villa bring formidable skills to the party, too

Finally, accolades to playwright Thomas for this: She delivers a message that’s worth getting. Even if chumps like me don’t particularly dig the package.

And I’ll tell you who really ought to see Citizens Market. The folks who are down on immigrants. They probably won’t. I double-dog dare them.