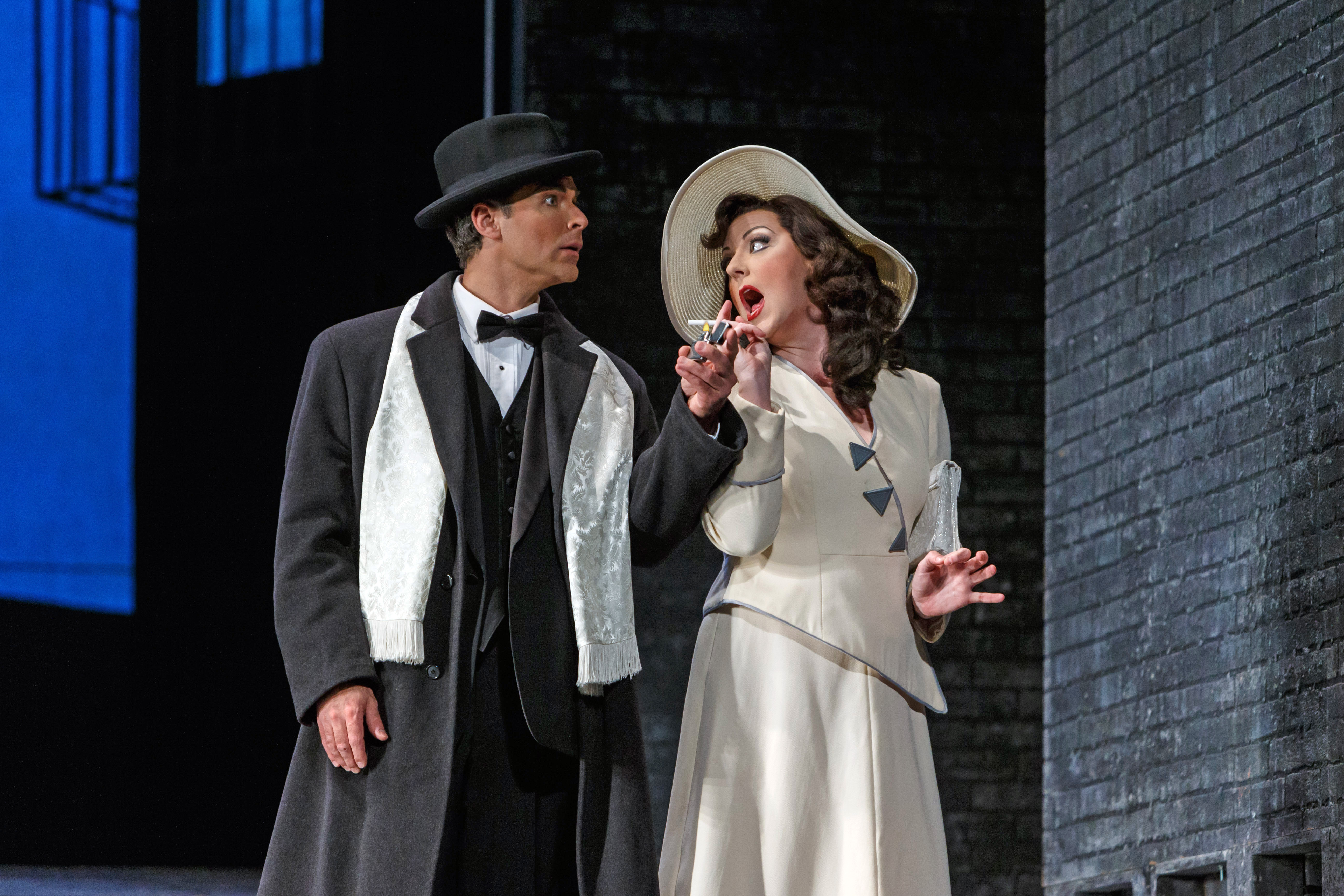 Don Giovanni (Craig Verm) is duded up for an epic encounter with the effusive Elvira (Corrie Stallings).

The sexiest show in town is not an R-rated movie. It’s a 232-year-old opera. Mozart’s Don Giovanni, at Pittsburgh Opera through October 20, sizzles with the intricacies and mysteries of love and desire.

Nudity is neither featured nor necessary.  When Giovanni, the legendary seducer, simply caresses the bared shoulder of a woman whose shawl has been cast aside—while the orchestra’s strings rise and ripple—the electricity fills Benedum Center.

And though the story revolves around a man who’d today be considered a sexual predator, the women he chases are much more than pawns in his game. They are formidable women, wrestling with their own profound urges and often keenly aware of the magnetism that they, themselves, can exude.

There’s a scene where saucy Zerlina, after a dalliance with Don Giovanni, must patch things up with her tortured fiance, Masetto. Strutting majestically in high heels (and singing grandly), Zerlina kicks off one shoe, then the other. Her aim is flawless. Each shoe zings across the stage, straight into Masetto’s gut. Now she’s alluringly barefoot. And now Masetto is on his hands and knees, crawling to her like a dog to its master.

The scene is both cruel and hilarious, symbolic and poignantly personal, all at once. That’s how Don Giovanni goes. The opera, a musical re-telling of the Don Juan legend, has been a tragicomic classic since its 1787 premiere. Pittsburgh Opera’s production re-re-tells it in a form that hits home.

As you may know from the promo material, this Don Giovanni is done in film noir style. Costumes and sets are designed to place the action in a shady 1940s urban underworld. The English translations of the Italian lyrics that scroll across the top of the stage are written in lingo to fit the times. (Don Giovanni to Zerlina, singing scornfully of her fiance: “You think a man like me could let you marry an idiot like him?”)

Throughout the opera, the film noir veneer is effective. It feels natural. No anachronisms clang dissonantly to muddy the mood. One recurring backdrop—the projected form of a red-brick high-rise building, silhouetted against a shifting sky—provides a wonderfully eerie tone. The whole thing comes across as a modern fable, soaked in dark-comic peril and fantasy—as it surely did in Mozart’s time, and as it certainly should today.

But the modernized overlay is not what makes the production work. The elements that make it work are the fundamentals: creative direction and stellar performing. They match the complex brilliance of Mozart’s music; they bring out the twists and ironic nuances in the libretto by Lorenzo Da Ponte. Once the combination casts its spell, it doesn’t matter that the setting is more Bogart than brocades and powdered wigs. You are in for a ride. 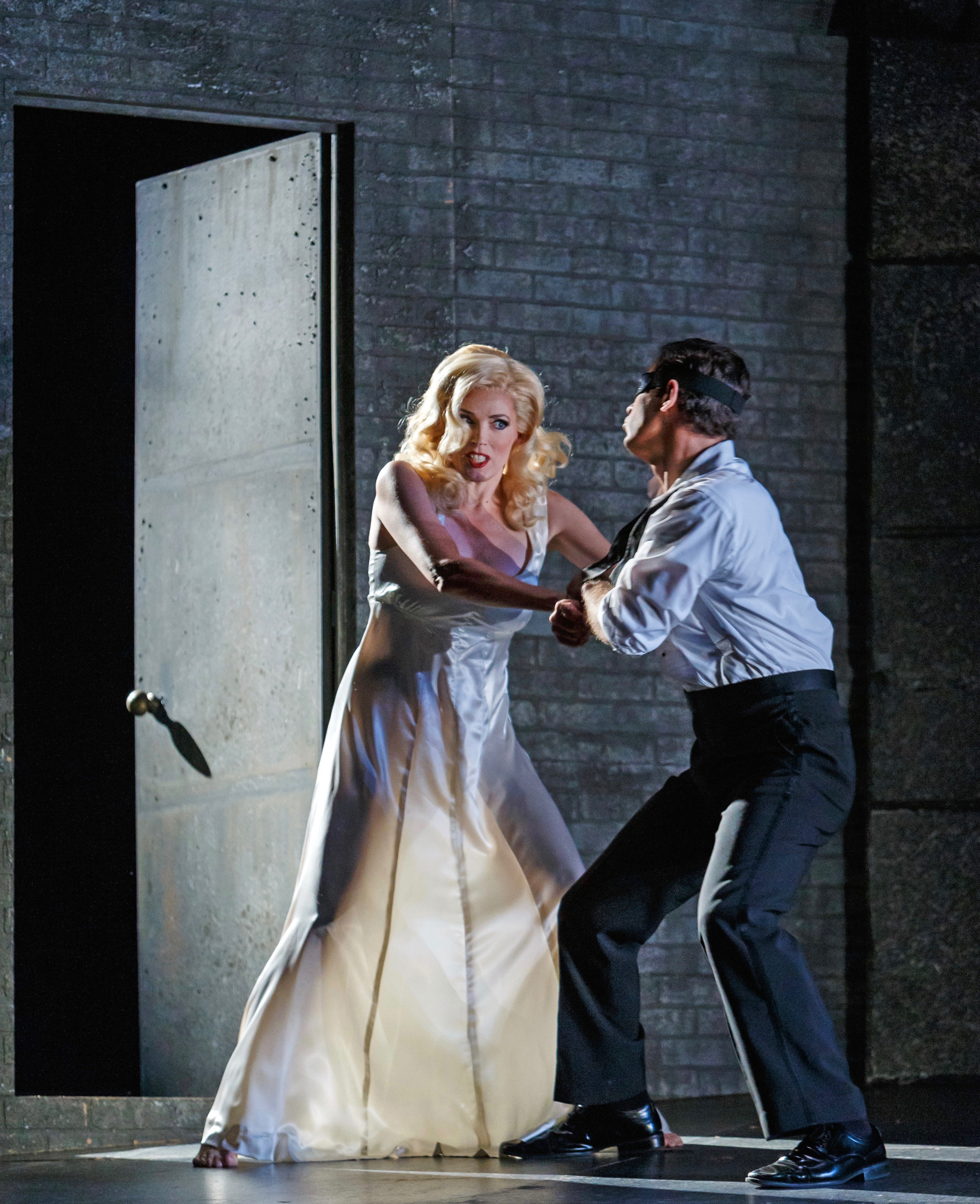 When and where did this ride originate? No one knows the exact source of the Don Juan legend, which may have begun as a folk tale. It entered literature in the early 1600s, when the Spanish dramatist Tirso de Molina wrote a play about a young nobleman recklessly seducing any woman he chances to meet. Tirso’s play had wit and depth, portraying Don Juan as what we might now call a sex addict and a sociopath.

His play also laid down a key plot element: For a time, the young rake literally gets away with murder. He kills the father of a woman he’s after, when the man tries to intervene. But dad’s spirit returns from the grave, and—shades of Banquo’s ghost in Macbeth—visits Don Juan for a ghastly dinner party. It ends in the ne’er-do-well’s death, his soul bound presumably to Hell.

The tale triggered centuries of Don Juan adaptations. Moliere’s 1665 play had the seducer as an unrepentant atheist. (That play was shut down by French censors.) In the early 1800s, Lord Byron’s long satirical poem turned Don Juan into a drifting adventurer who flirts with the Russian empress and hunts foxes with ladies of the English gentry. In the 1995 movie Don Juan DeMarco, Johnny Depp played a delusional modern-day American who thinks he’s the great Spanish lover, while Marlon Brando played his psychiatrist.

Sex and death are timeless themes indeed. Through the years, however, Mozart’s opera has become the definitive version. The story lends itself to musical treatment. It has a mythic quality. Don Juan’s boundless attraction to women—and his ability to attract them—seem almost supernatural. Yet they strike sparks in anyone who has a sex drive, which includes most of us. Then comes the blatantly supernatural ending, with the deadly dinner … and in short, you have a saga that cries out, “Set me to music!”

Wolfgang Amadeus Mozart was at the height of his musical powers when he composed Don Giovanni for the Italian Opera in Prague in 1787. His librettist, Da Ponte, wisely put the murder scene at the very beginning. We know from the start that Giovanni is a Don who’ll stop at nothing to get what he wants.  And from there, the currents of humor play finely against the serious and sweaty stuff.

The Catalog, the Women, the Man

One early comic interlude is the so-called “catalog aria.” Sung by Giovanni’s sidekick and servant, Leporello, it is a detailed accounting of the quantities and qualities of women the Don has taken to bed: “In Italy, 640. In Germany, 231 … In Spain [dramatic pause], 1003! … In winter he likes them fat. In summer, thin …” Leporello, shuffling through his notes, delivers this flood-tide of data to Giovanni’s latest conquest, Elvira, hoping to rid her of the notion that she might have the man all to herself.

The rest of the show plunges into complications and plot twists best enjoyed afresh if you haven’t yet seen a Don Giovanni. Your humble reviewer doesn’t wish to offer non-expert opinions on the fine points of opera music; I can say only that the orchestra and the singing sounded very good. Let’s credit the cast by name; then I’ll close with a comment that may be provocative. 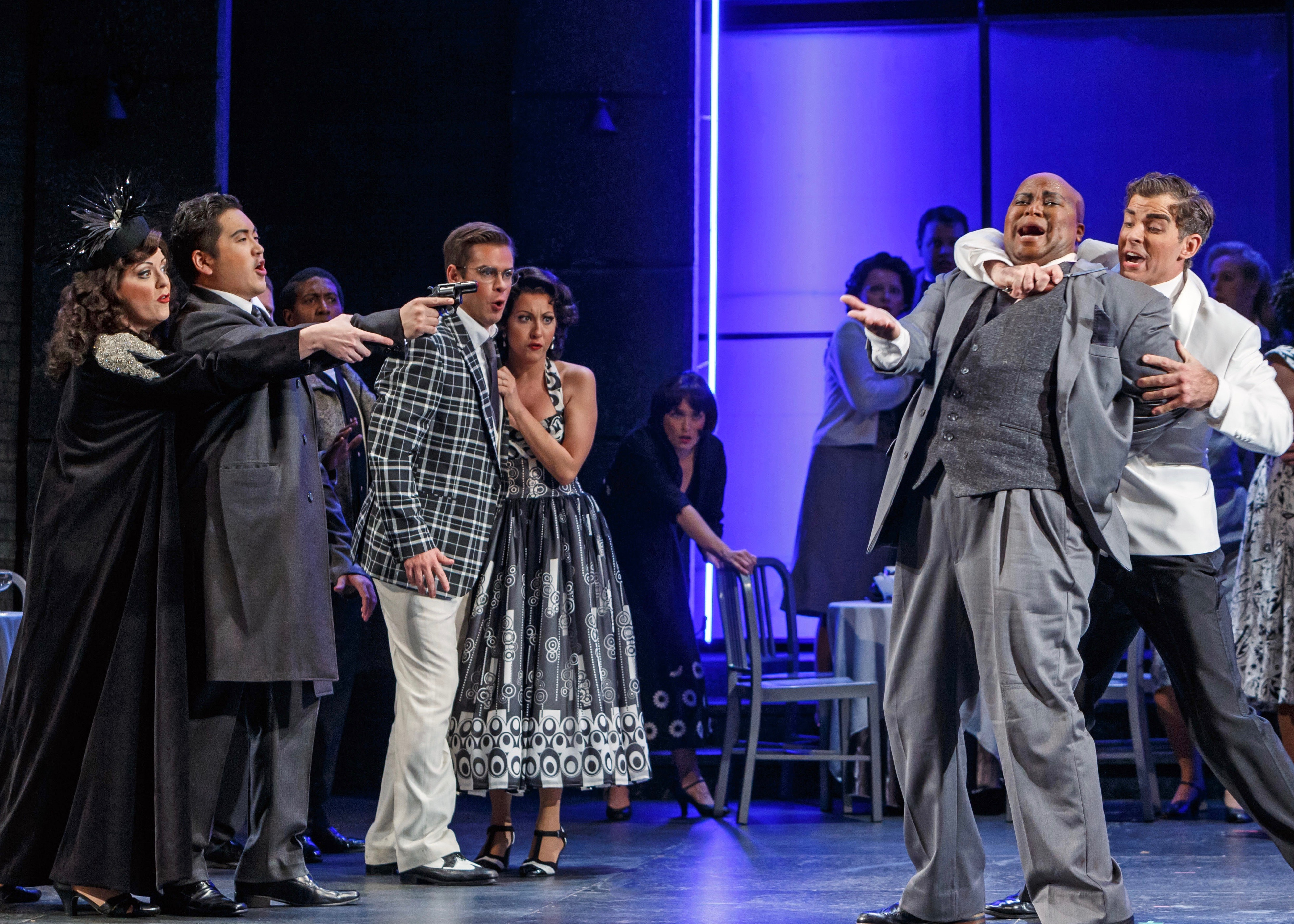 Mezzo-soprano Corrie Stallings is one powerful Elvira: a woman not to be messed with, though the dashing Don Giovanni (baritone Craig Verm) tangles with her anyhow. Mezzo-soprano Antonia Botti-Lodovico is a fiery Zerlina while bass-baritone Tyler Zimmerman does a nice job as her nerdy fiance Masetto. Soprano Rachelle Durkin plays a stern and courtly Anna—the mourning woman whose father, the Commendatore (bass Brian Kontes), is murdered—and tenor Kang Wang keeps suitable company as Anna’s suitor, Ottavio.

South African bass-baritone Musa Ngqungwana, a big man with a big voice, fits the comic profile of Don Giovanni’s servant Leporello. He physically overshadows the Don and yet must serve his every whim.

And speaking of overshadowing, here’s the comment. Amid the strong women in the opera, one character who doesn’t stand out as much as you might expect is the title character: Don Giovanni. This might be due, in part, to how the role was written long ago. When the great seducer homes in on a woman, he doesn’t try to dazzle her with witty conversation or clever tricks. He’s all business. He goes directly for the emotional jugular: Oh, I love you. Don’t you love me? I can make you very happy. Let me prove it. Right now.

Maybe that’s realistic. Maybe that is how serial seducers operate. I wouldn’t know. I do know that I kept waiting for the great dazzle, which didn’t come. And gradually, I felt a weird inversion taking place in my mind and feelings. I began to perceive Don Giovanni not as a conqueror of women, but as the women’s plaything—the guy who shows up to fulfill their fantasies, to play a (mere?) actor’s role in their panoplies of lust, love, and longing.

Perhaps Mozart and Da Ponte meant the opera to have this effect. Perhaps the skillful stage director of the Pittsburgh Opera production, Kristine McIntyre, picked up on those traces in the score and libretto, and ran with them.

But that doesn’t matter, either. Don Giovanni is rich and intriguing. Bravo.

The direction, sets, and costumes of Pittsburgh Opera’s Don Giovanni are borrowed from a similar production that Kristine McIntyre previously directed at Lyric Opera of Kansas City. The opera plays in Pittsburgh only through Sunday, Oct. 20 at Benedum Center, 237 7th St., Cultural District. Reserve tickets promptly by visiting Pittsburgh Opera on the web or calling 412-456-6666.

Music director and conductor for this production is Antony Walker, with assistant conductor Glenn Lewis. Chorus master is Mark Trawka. Scenery design is by R. Keith Brumley, lighting by Marcus Dillard, costumes by Mary Traylor, and wigs and makeup by James Geier. Associate coach and pianist is James Lesniak, assistant stage director is Matthew Haney, and let’s not forget the person who makes every theater production work in real time: the stage manager, Cindy Knight, assisted by Alex W. Seidel and Jinah Lee.