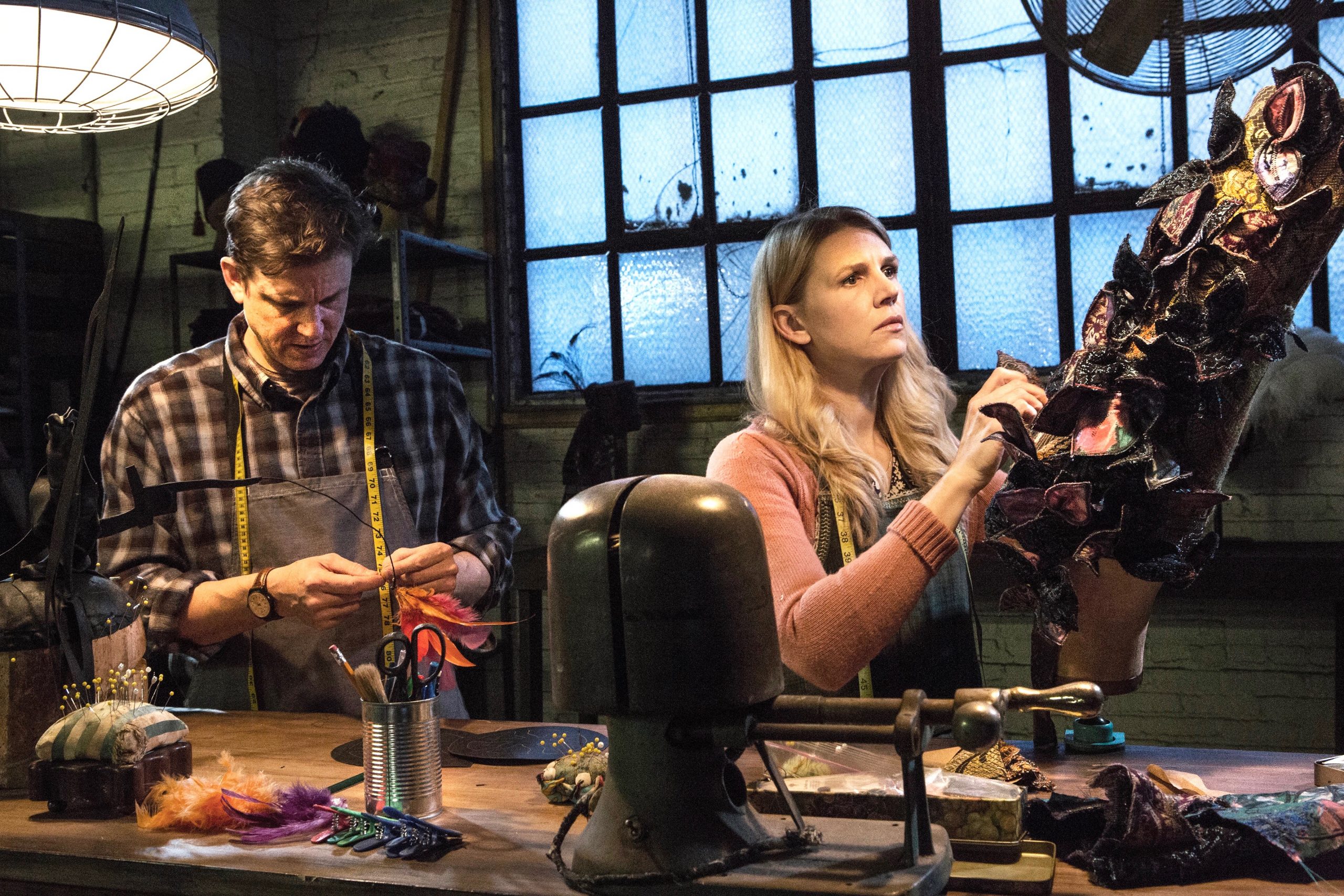 Is this a hat which I see before me? Lisa Velten Smith, as Joan, has a tall one going, while Todd (Andrew William Smith) calculates his next move in Quantum’s ‘Far Away.’ (photo: Heather Mull Photography)

Mayhem at the Capitol. Ice storms in Texas. Here in Pittsburgh, masked men and women roam the streets of a city still in semi-lockdown, 12 months into a plague that won’t go away. Welcome to surreal life in 2021, the year that promises a new dystopian twist with every news cycle!

It’s a fitting time for Quantum Theatre to stream Far Away. Viewable on demand through March 7, this filmed remake of a dystopian stage classic from the year 2000 might even make you feel better than usual, as it depicts a dark-comic bizarro world in which things have gotten unimaginably worse.

You’ve heard of the Mad Hatter? Far Away has mad hats aplenty, made and worn for mad purposes. And murder hornets? Here we shall stop, because the story line works best with minimal to no spoilers. Far Away was written by Caryl Churchill, England’s reigning queen of experimental theater. She scripted the play to run short and bittersweet, packing three mini-acts into about 45 minutes, a length that has turned out to be ideal for our current age of watching stuff at home by the episode.

Better yet, Quantum’s version is done with production quality rivaling what you see from Netflix or HBO. Special effects are used sparingly—you won’t see any burbling, ravenous CGI monsters; there is no supernatural morphing and no wielding of superpowers—but then again, Churchill didn’t write those kinds of elements into Far Away. The creepy events are just natural extensions of things that humans have actually done or caused to happen. Aside from a few hideous glimpses, they happen offstage (or in this case, off-camera), being intimated rather than shown. 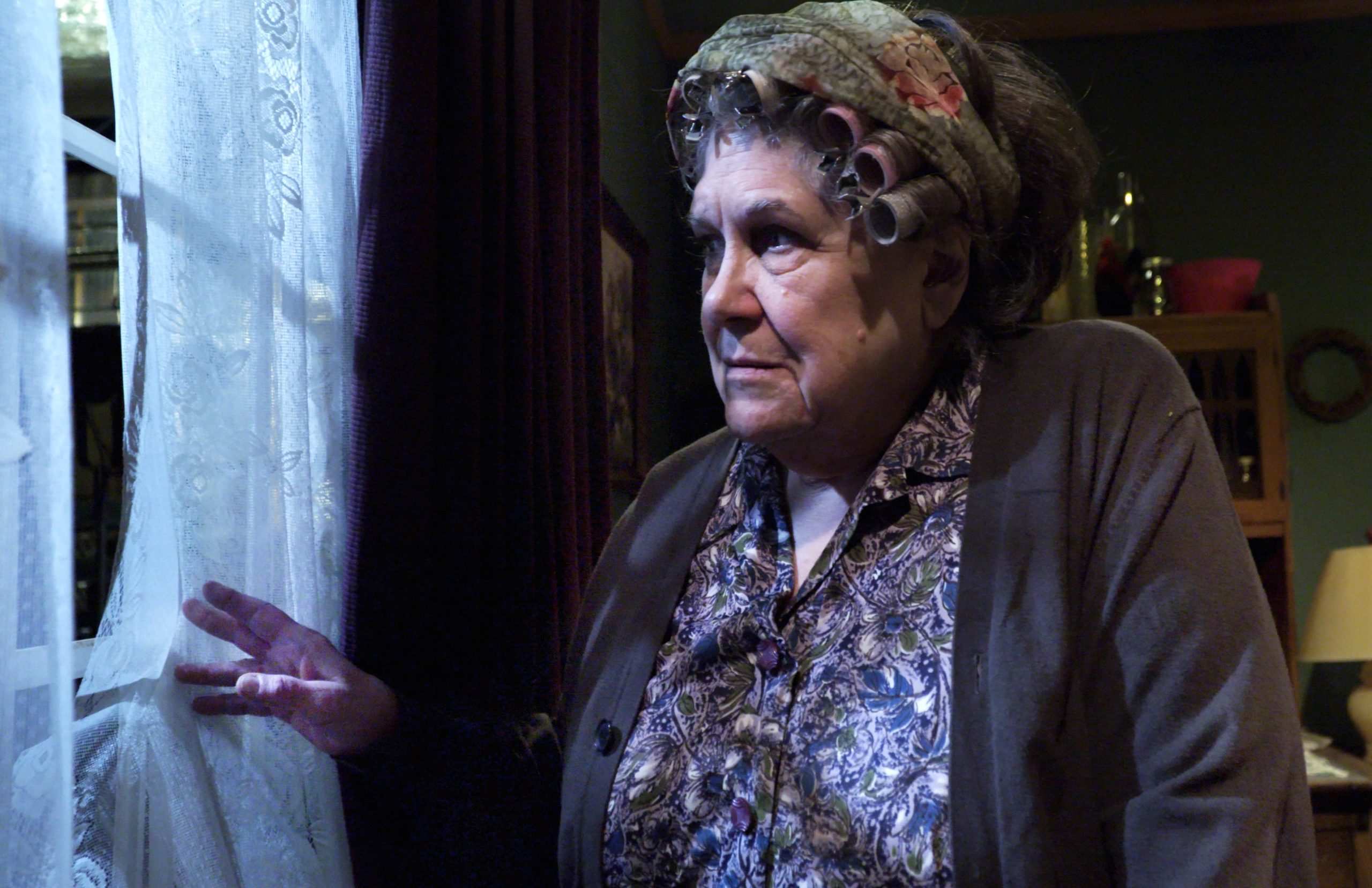 Aunt Harper, played by Ingrid Sonnichsen, sees much and tries to keep it under her curlers. (photo: Joe Seamans)

And this ultra-realism helps to bring home the story. Quantum’s long experience with producing plays in locations outside a theater is put to good use here. The hatmaking factory looks exactly like a weird artists’ operation you might find in one of Pittsburgh’s former industrial buildings, which in fact is where the scenes were staged and filmed. Far Away was co-directed by Karla Boos, Quantum’s artistic director, and Joe Seamans, an experienced filmmaker and longtime Quantum collaborator, with Mark Knobil as director of photography. The latter two have used their cinematic skills to add impact as well.

Far Away opens with an eerie wide shot. Looking down across a snow-covered valley at night, we see a lonely house amid the barren trees. Over the ridge in the distance, the bright lights of a city are visible, but the only light in the foreground shines from a solitary window of the house. The message is: Ooh, let’s peek inside and see what’s up. In film jargon this type of shot is called an establishing shot. It establishes both the location of an upcoming scene and the mood. And it’s nothing special; the device has been used in countless movies since movies began. The point is that we’re accustomed to being guided into scenes in this manner, whether we realize it or not—and when the device is done right, as Seamans and Knobil do it, we instinctively sense that we’ve got drivers who know how to conduct the ride.

The ride in Far Away is provocative and, ultimately, unsettling. Precisely because the bizarre events are extensions of deeds actually done, we can begin to feel their ominous echoes and foreshadowings all around us. And the symbolism alone is enough to get a person’s mind spinning. The hats, the hats!  Why hats? What does it mean when they are worn for the occasions portrayed? We could be here for a long time if we start delving into that. Catch Far Away and see what lands in your noggin. 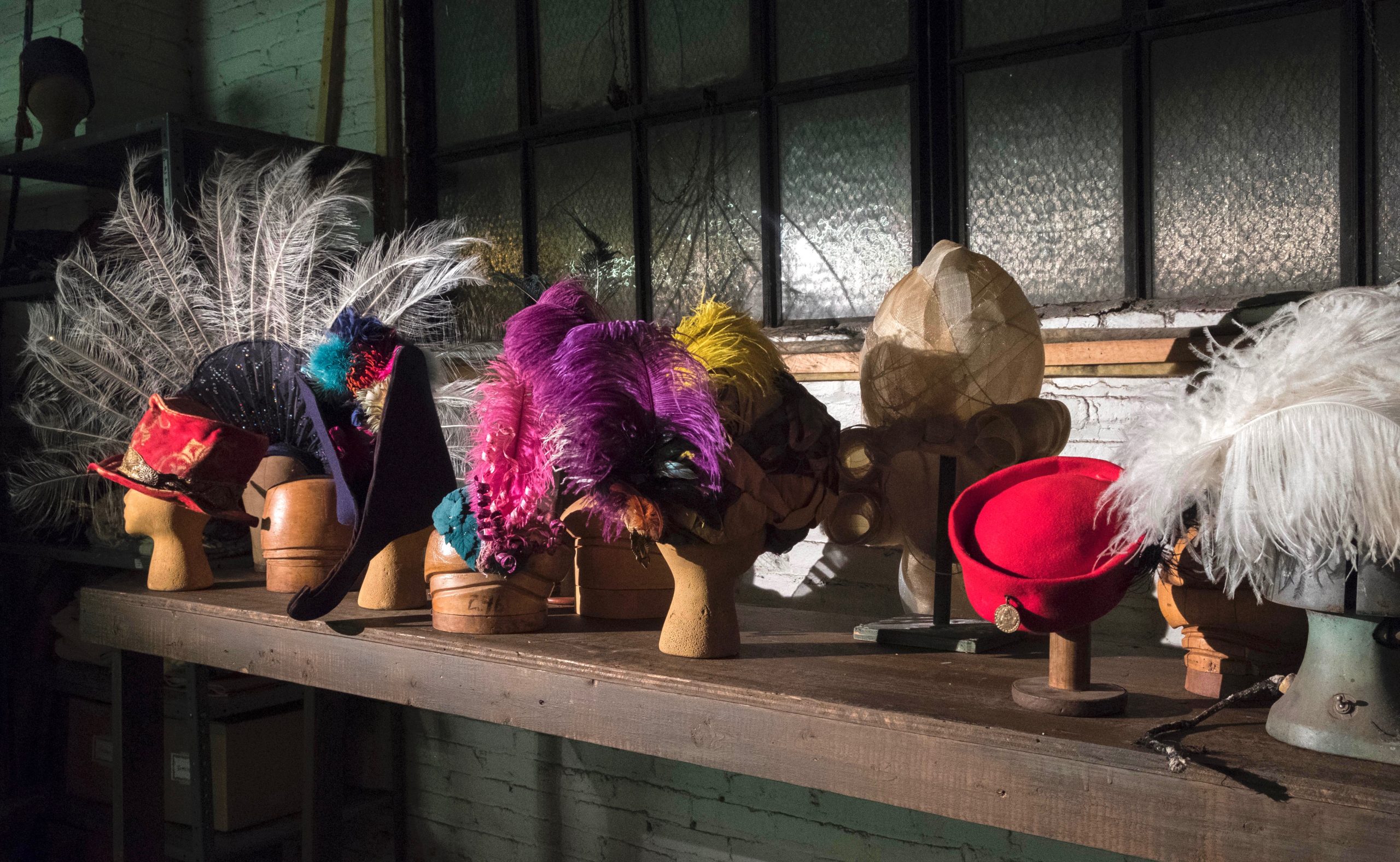 There are no sonnets for these non-Easter bonnets. (photo: Heather Mull Photography)

Caryl Churchill’s Far Away is acted for Quantum Theatre by Lisa Velten Smith, Andrew William Smith, and Ingrid Sonnichsen. The Smiths are quite convincing as a young couple who fall in love—they’d better be, since they are married in real life—and Sonnichsen is perfect as the blustery old aunt who either knows or thinks she knows more than the average bystander.

Access tickets are available on Quantum’s web page for the show. Pick-your-price donations of $10 up to $50 give you unlimited on-demand viewing for 72 hours, any time up to midnight on March 7. This writer advises donating generously and clicking quickly on the ticket link, skipping the temptation to glance at a couple of semi-spoilers given on the page.

The scenic designer is Kelsey Garrett, with lighting by Sydney Asselin and sound by Sartje Pickett. Susan Tsu, the costume designer, enlisted 13 custom hat artists to provide the hats for Far Away.  Co-directors, as noted, are Karla Boos and Joe Seamans with Mark Knobil directing photography.