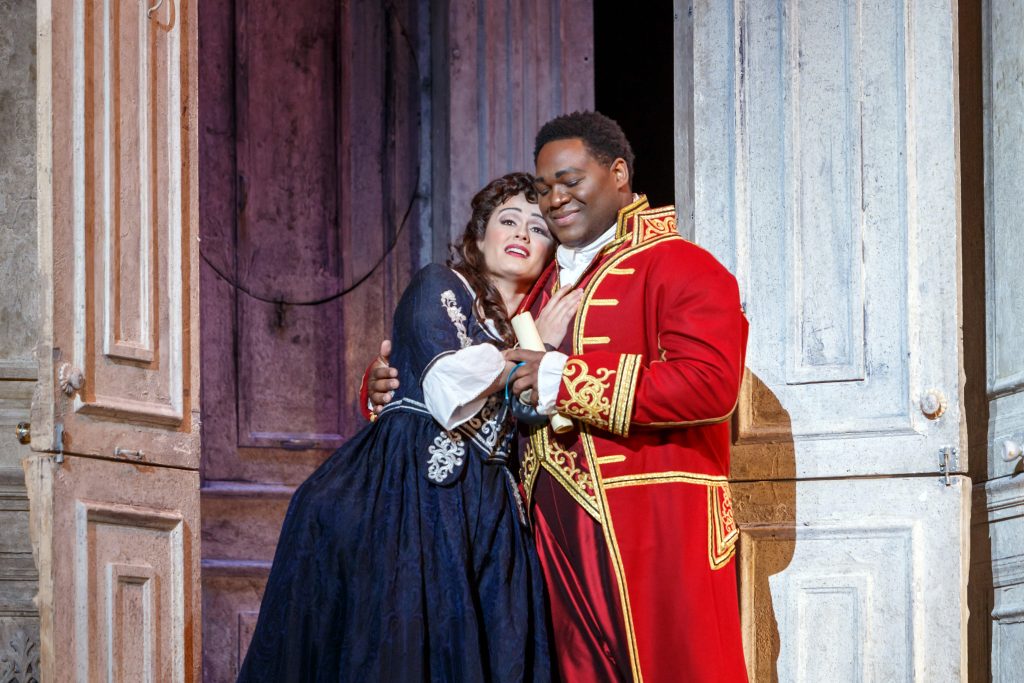 The thematic elements of love, suspicion, and jealousy have been woven through romantic plays and literature for eons. That case is especially true in Pittsburgh Opera’s production of The Marriage of Figaro running through November 13 at Benedum Center. With music by Wolfgang Amadeus Mozart and libretto by Lorenzo Da Ponte, The Marriage of Figaro incorporates those themes into an opera set at a nobleman’s home in Seville, Spain, in the late 1700’s.

The opera’s main characters are the Count (Jarrett Ott) and Countess Almaviva (Nicole Cabell), and their servants Figaro (Michael Sumuel) and Susanna (Natasha Te Rupe Wilson), who are engaged to be married. Figaro and Susanna are truly in love, however Count Almaviva covets Susanna and has been quietly pursuing her.  And is also rumored to be invoking the nobleman’s right of Le droit de seigneur. That somewhat mythical, seldom proven feudal right of a nobleman to sleep with an underling’s wife on their wedding night.

There’s another problem too, Marcellina (Helene Schneiderman), an older housekeeper for Dr Bartolo (Ricardo Lugo), loaned Figaro a large sum of money and if he can’t repay the debt he is contractually obligated to marry her.

One of the best musical pieces comes early on, the opera’s Overture, which is often played by symphonies as a stand-alone piece. In the first scene we see Figaro and Susanna singing about their upcoming marriage and the Count scheming to undermine it. Figaro sings of his upcoming retribution, “If you want to attend my school / I’ll teach you how to dance.” Talk about an 18th century smackdown. Sumuel, a bass-baritone, has a strong forceful voice with a booming bottom end to it. Soprano Wilson sings beautifully and has brilliant touches of physical comedy in her movements and expressions. 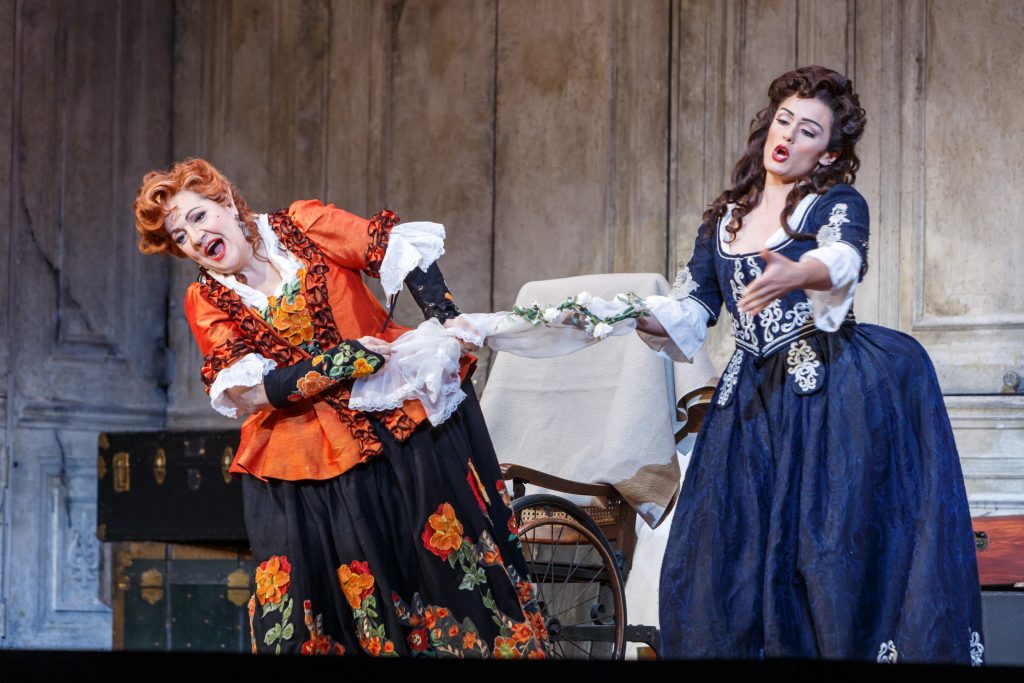 Marcellina (Helene Schneiderman) and Susanna each try to yank the bridal veil out of each others hands.

Then Marcellina enters the room and sees Susanna’s bridal veil. She starts playing with it and seeing how it would fit on her. Susanna sees what Marcellina is doing and confronts her. They both sing insults to one another as they tussle over the veil. Another fly in the ointment is the impetuous young man Cherubino (Jazmine Olwalia)  whose heart is filled with lust for women, including the Countess. He is always scampering about and stirring things up in a comedic way. Olwalia really brings the character to life. 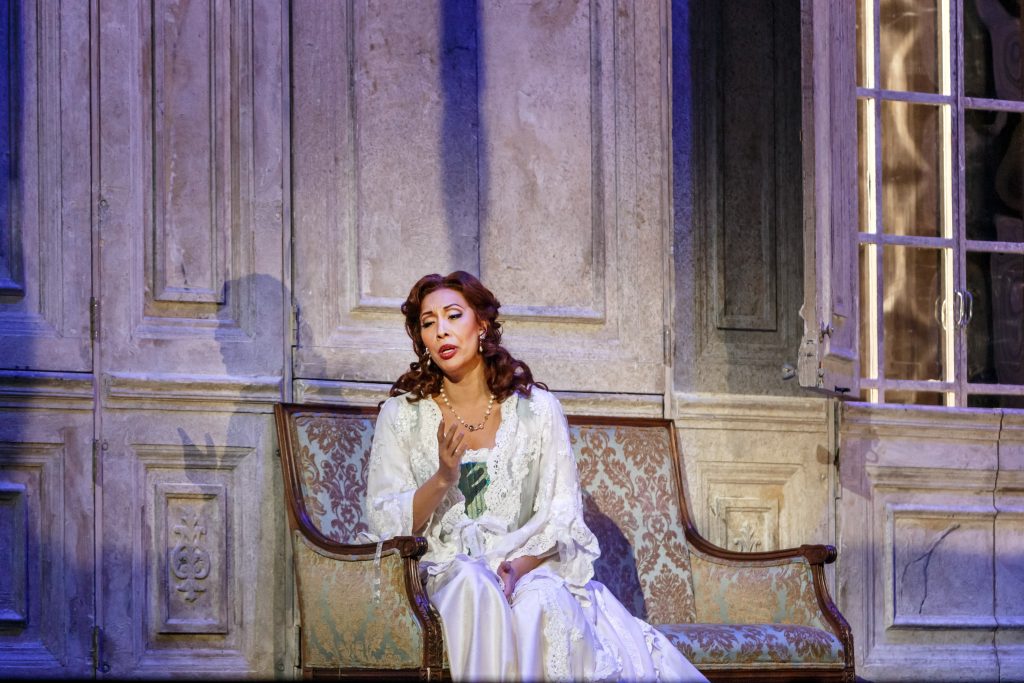 The Countess knows of her husband’s philandering and sings a wonderful aria dripping with lament and love. She combines forces with Figaro and Susanna to teach her husband a lesson by dressing Cherubino as a woman and planning to send him out as Susana to meet the Count. The plan is temporarily foiled when the Count comes back early from hunting and finds the door to the Countess’ bedroom is locked. The Countess unlocks the door after Cherubino hides in a closet and locks it behind him. This leads to one of the most comedic scenes of the opera. 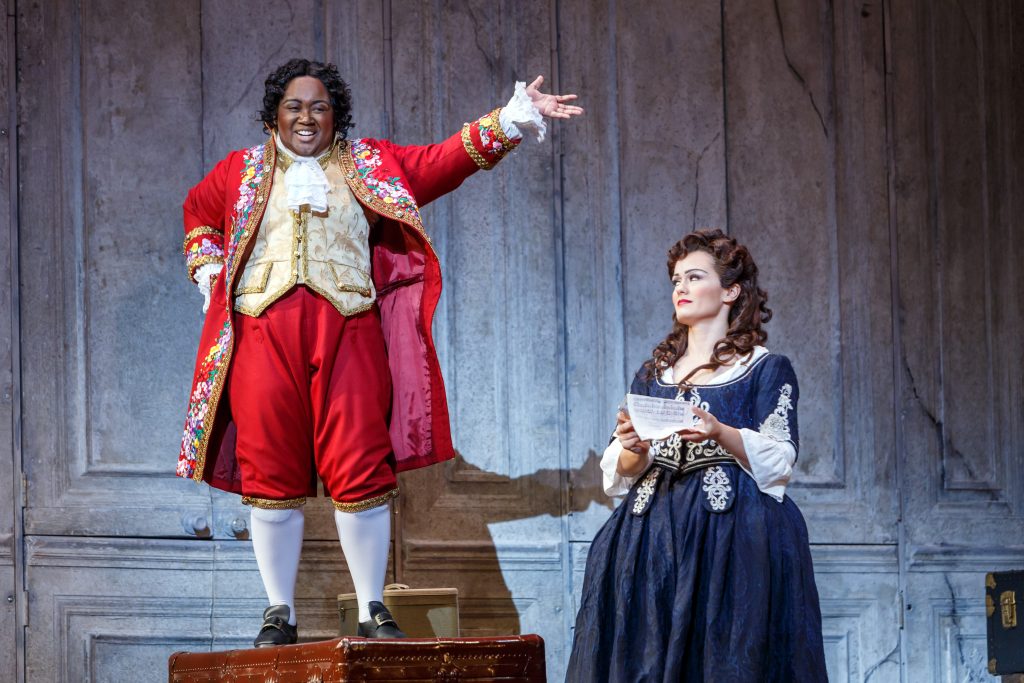 The Count grows more suspicious and intensifies his plot to derail the marriage of Susanna and Figaro. Ott plays the role of shemer/foil very well. He knows that Figaro can’t repay the debt to Marcellina so he has a judge enforce the marriage contract. When it appears that all is lost for Figaro and Susanna, a miracle occurs. However the romantic subterfuge continues right up to the very end. Figaro (Sumuel) delivers a touching aria full of lament for love lost and the deceit of women. He even cautions husbands about the treachery of women. The opera is full of comedy, incredible singing and a symphonic score by Mozart. Clocking in at 3 hours and 5 minutes (with a 20 minute intermission), means you will definitely get a fair return for your admission price. 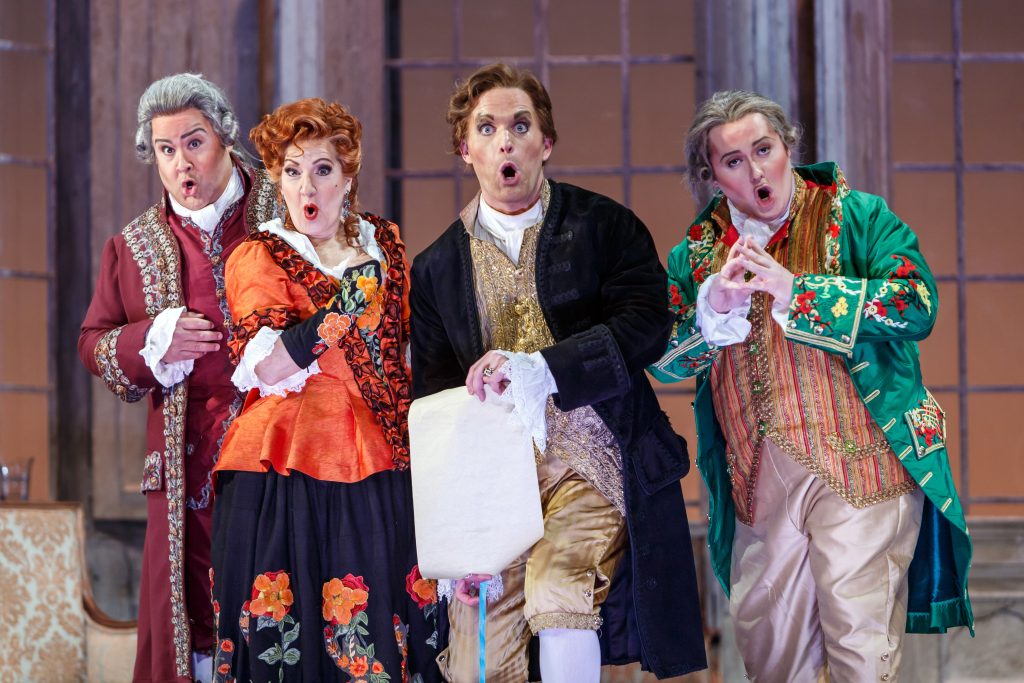 The whole cast was very skillful in their roles. Nicole Cabell, who played the countess, makes a triumphant return to Pittsburgh Opera. She played Mimi in the 2019 Pittsburgh Opera production of La bohème. Cabell sings two splendid arias and a funny duet with Susanna in this production of The Marriage of Figaro.

I learned some valuable context for The Marriage of Figaro with the pre-performance talk by Kristin Gatch, Assistant to the General Director of Pittsburgh Opera. The opera is supposedly based on crazy events in the meandering life of French playwright Pierre Beaumarchais.

The playwright had many roles and activities in his life including “watchmaker, harp player, lover, spy, publisher, playwright, pamphleteer, and gunrunner for the American Revolution.” His play, The Marriage of Figaro, was banned for several years by King Louis XVI inside of France due to the strong political nature of several of its scenes.

Mozart liked the romantic story it contained and reworked the play with Lorenzo Da Ponte to turn it into a more character rich Italian opera. The King liked the new version. The Marriage of Figaro debuted in 1786 in Vienna, Austria’s Burgtheater.