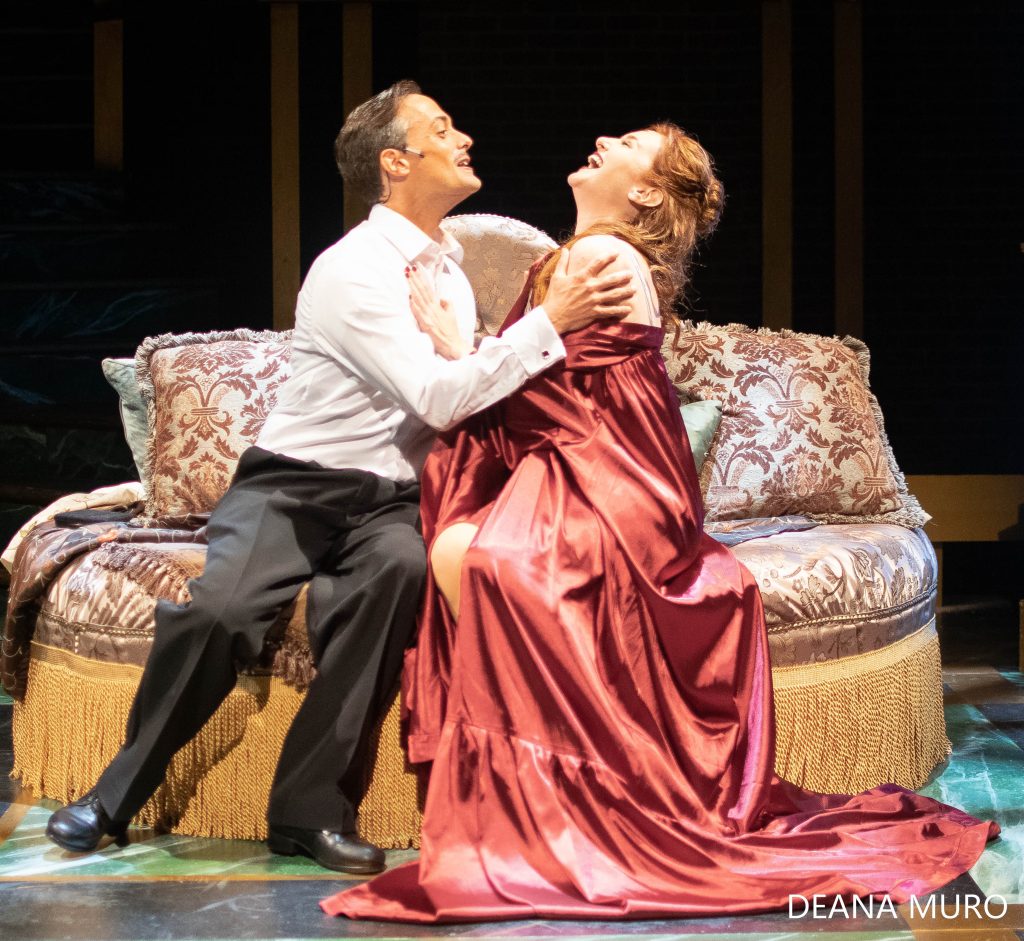 In the opening scene, to establish that Berlin’s Grand Hotel of 1928 is a busy place, we hear switchboard operators connecting its many guests to the post-WWI world outside. Likewise, those seeking to make reservations call in. The syncopation of ringing phones quickens to a hurried pace as the famed marble lobby fills with the hustle and bustle of bellhops, chamber maids, and the hotel’s fantastically costumed patrons.

In like measure, I can hope that the switchboard to reserve tickets for this wonderful show, produced by Front Porch Theatricals, will ring as busily. Grand Hotel: The Musical is a deft tour de force featuring an exceptional ensemble delivering a glorious night of song and dance. The show runs only through Sunday, August 28. Don’t wait for the concierge; book your tickets today!

Based on the original 1929 novel Menschen im Hotel (People in a Hotel), by Vicki Baum, the story was originally adapted to the stage by William Drake, and then to the screen (also by Drake,) in a 1932 non-musical film that received the Oscar for Best Picture. Grand Hotel’s story is a marvelous unraveling of its patrons’ secrets and desires. Most of them find love and life anew through not-so-chance encounters in the many chambers, cabarets and cafes that comprise this once-famed place. After a failed attempt to remake the film as a movie musical in 1977, it was staged on Broadway in 1989 when it won the Tony for Best Musical. And now, in Pittsburgh, over the course of two years fighting Covid, the death of Co-founding Producer Leon Zionts, and the restrictions imposed on actors and theater-goers alike, Director Scott P. Calhoon, Choreographers Danny Herman and Rocker Verastique, and Scenic Designer Johnmichael Bohach have fulfilled their mission to stage a winning version, too.

The story begins with the introduction of a mysterious Colonel Doctor (Ryan Hadbavny), disfigured since the war, who, under the effects of the morphine he carries in his ever-present black bag, narrates the dramatic action soon to unfold. His is an ominous view when we are informed that nothing much happens, nor will it change, at Grand Hotel. On the night I attended, last-minute understudy Patrick Mizzoni commanded the role with no hint he was less than prepared. 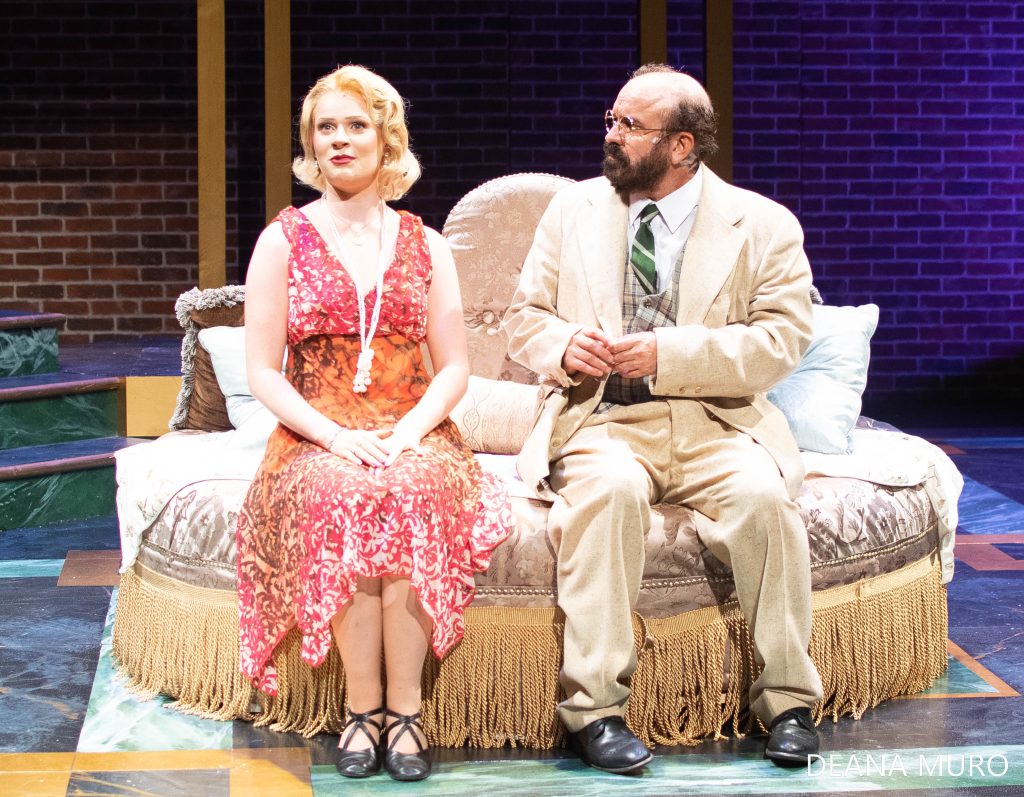 A poor, but patient typist (Betsy Miller) awaits her chance to dance with a jittery accountant (Jason Swauger).

In turn, we are introduced to Baron Felix Amadeus von Gaigern (Scott Pearson), a playboy and bon vivant who is deeply in debt to mob fortunes that have kept him richly swaddled in the protective comforts of the hotel. Entering the lobby is the sickly Otto Kringelein (Jason Swauger,) a former accountant, actively dying, who with the last of his saved earnings wishes to live his final days as well as he can. His former boss, General Director Preysing (Daniel Krell), is also staying at the hotel, awaiting good news from Massachusetts that will save his failing company, as well as the dignity of his family back home. Following on his heels is the poor, Hollywood-obsessed typist who he has summoned to record his correspondence. Star-struck and delusional, she wishes to be known by her future stage name, Flaemmchen (Betsy Miller). And then there is the aging ballerina, Elizaveta Grushinskaya (Daina Michelle Griffith) and her long-loyal assistant, Raffaela (Kristin Conrad), along with their entourage of chauffeurs and stage managers and theater owners who insist that the famous dancer keep to her planned tour of Europe despite evidence that ticket sales are poor. 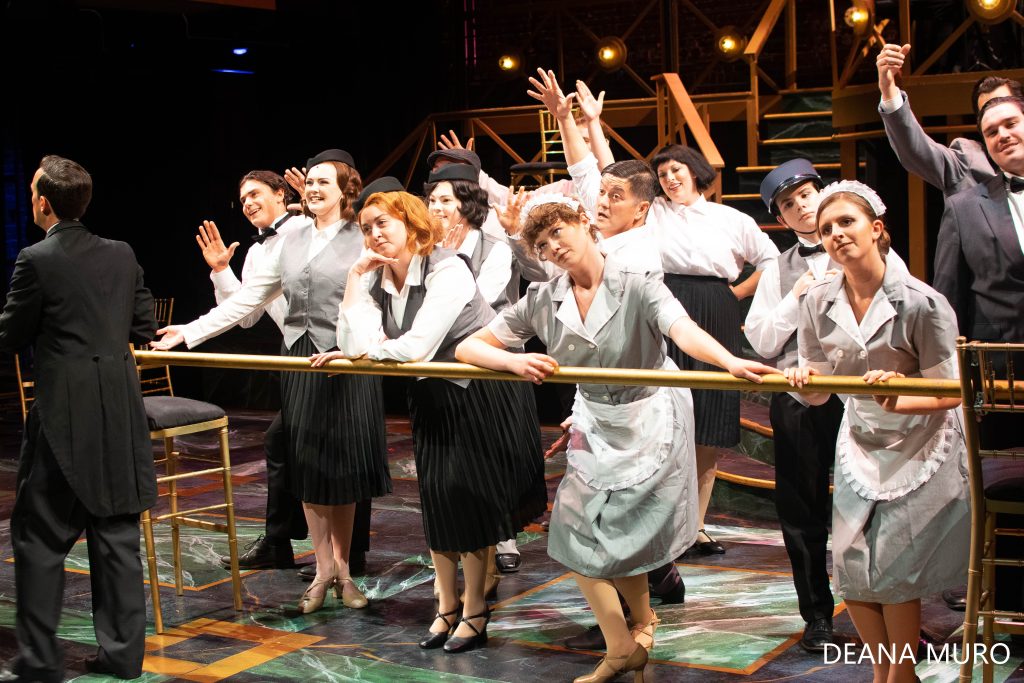 The bar is set for a large ensemble of musical maids and bellhops at Berlin’s Grand Hotel.

Clearly the most notorious of characters will be our scheming Baron. Surely, too, Otto Klingelein, dying from some incurable disease, will meet up with the mysterious Colonel Doctor and his bag of tricks. And, likewise, we expect that the romantic ingenue will find her dreams come true when she meets the wizened ballerina. But the intrigue we have for these characters and their every secret becomes more entwined, building conflict, and yet unraveling beautifully in songs of joy and ultimate discovery. The book by Luther Davis and the music and lyrics by Robert Wright and George Forrest stray from formula. We are not held captive to more traditional this-is-what-I-want solos, nor are we disappointed when characters fulfill their needs in unpredictable ways. 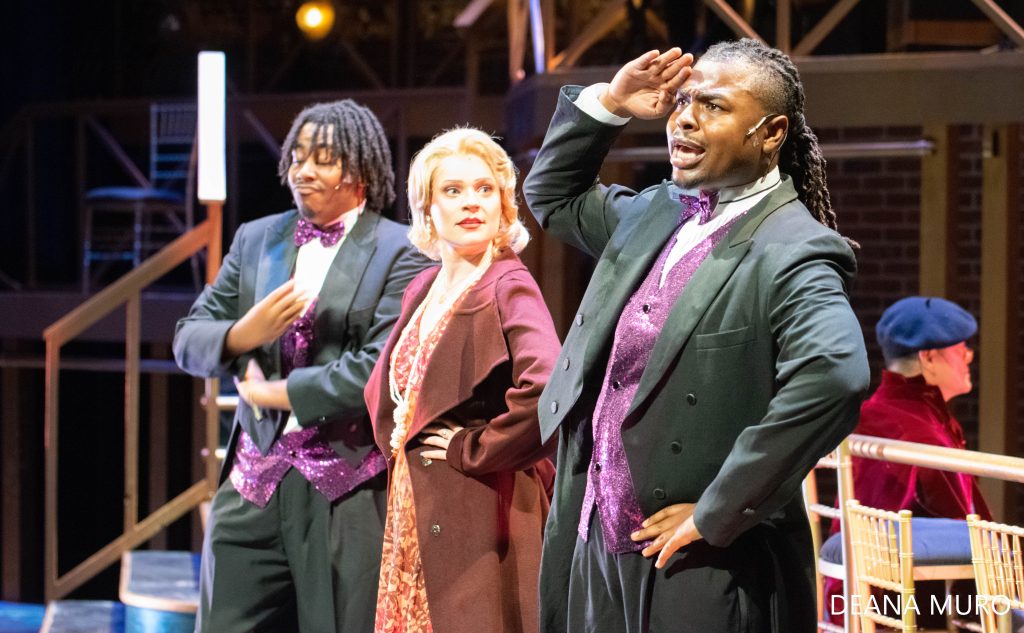 The two “Jimmys” (Matthew Diston and Malcolm McGraw) out flank a young ingenue (Betsy Miller) in a jazzy two-step.

All of the cast are standouts in their roles, something a bit surprising in a company so large. Not to be overlooked is their musical talent. These are seasoned performers who sing with exceptional talent, supported by a fine orchestra under the direction of Douglas Levine. And, yet, I wish to dollop an extra ounce of praise on the head of Jason Swauger who, in his role as Otto Klingelein delivers not one, but two fantastic numbers, “Table with a View” and “We’ll Take a Glass Together.” Also worthy of extra credit is the jazzy dance piece led by the two “Jimmys” (Malcolm McGraw and Matthew Diston). If there was one distraction, I found the Bolera number much too long.

Absolute praise is to be heaped on producers Bruce Smith and Nancy Zionts for envisioning this memorable production, despite the length of months (years?) it took to come to life. Let me assure you, however, this is a full production, and the well-designed stage is filled by an energetic cast, replete with dozens of scullery workers, bellhops, maids, and, yes, those very busy telephone operators.

Speaking of which, have you made your reservations yet? For tickets and further information, visit Front Porch Theatricals on the web or phone the friendly box-office operator at 412-320-4610 ext. 10. Through August 28 at the New Hazlett Theater, 6 Allegheny Square East, North Side.

Lighting is by Andrew David Ostrowski, sound by Angela Baughman, and costumes by Valerie Webster. Hair and wigs are styled by Nicole Pagano, assisted by Sarah Schuck. The dialect coach is Nancy McNulty. Nick Mitchell is the production manager and Tim Brady is the stage manager.

C. Prentiss Orr will release his latest narrative history, The Surveyor and the Silversmith, this
fall. He is also a co-author and the principle editor of Pittsburgh Born, Pittsburgh Bred; 500 of
the More Famous People Who Have Called Pittsburgh Home.