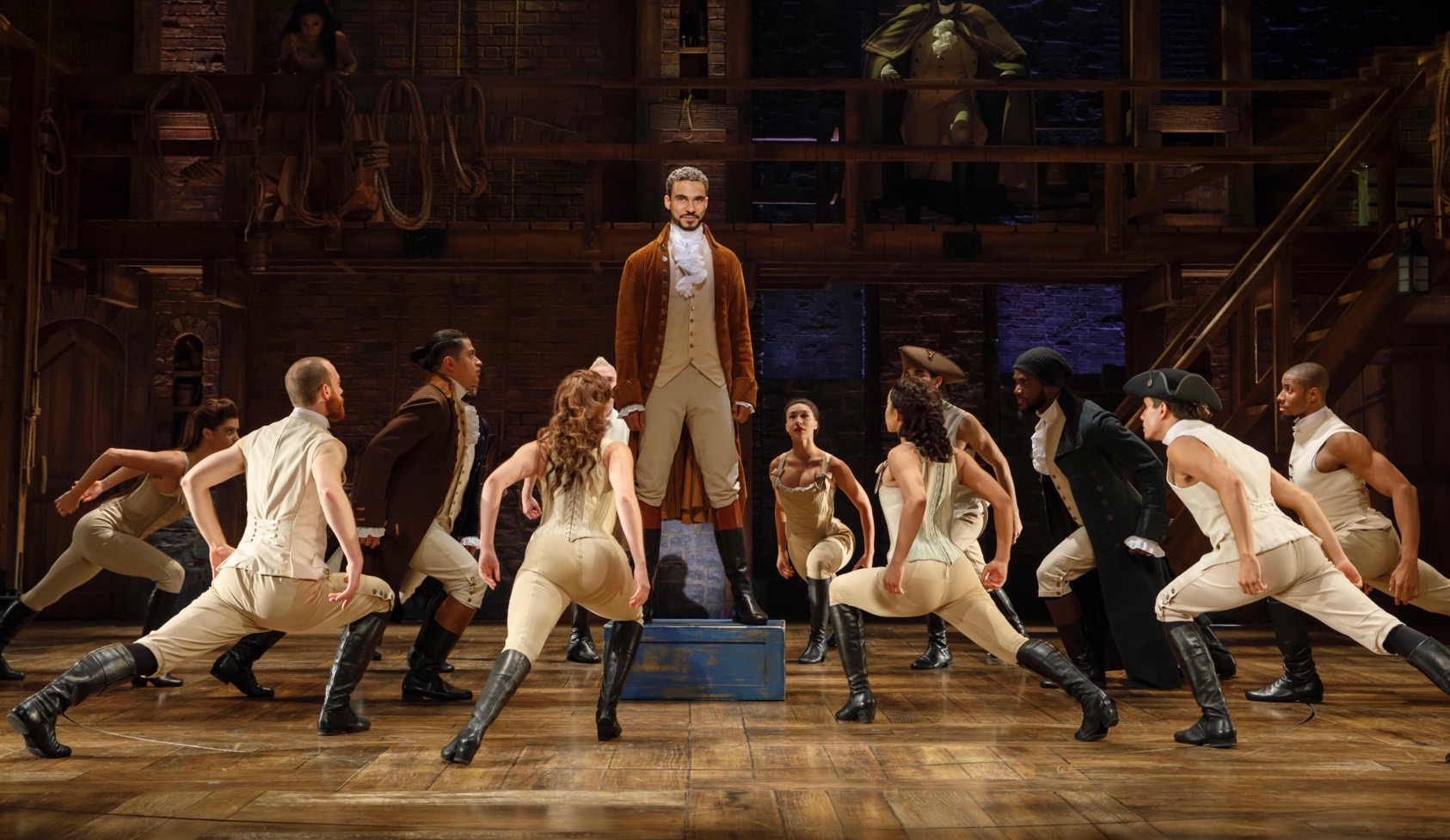 Yep, that’s him. And that’s an ensemble of tremendous dancers who add to the impact of ‘Hamilton.’ Austin Scott plays the lead in this touring-company photo, although the role in Pittsburgh shifts mid-run to actor Edred Utomi.

How good is Hamilton? Ranking it on four basic elements of a musical—words, music, dance, and story—I’d say it scores high on the first three, and does a pretty nice job of fitting multiple complex stories into a not-too-long timeframe.

But a really good musical is more than the sum of its parts. It has emotional punch. It arouses feelings you’re excited to feel, which can range from Woo, that’s cool to My goodness gracious, where is this taking me?

And on that meta-metric, Hamilton scores an “Oh yeah.” The touring production here in Pittsburgh (through January 27) rings the magic-moment bell repeatedly. Even if you’ve heard the original cast recording—which contains nearly all the witty lyrics and catchy beats of this sung-through musical—the live performance will move, amuse, and surprise you in ways the OCR cannot.

Hamilton is an intensely physical experience. Just as the American Revolution must have been, and just as hip-hop is today. The dancing and movement are, I think, under-heralded strong points of the show. They do more than complement Lin-Manuel Miranda’s ambitious script. They fuse with it, helping to capture the spirit of the times that are being portrayed.

Did the Founding Fathers hip and hop? Yes. George Washington, a big, athletic man, was a superb dancer. And did they rap? They hardly ever stopped. Alexander Hamilton was a world-class talker. So was his bitter rival, Thomas Jefferson. Moreover, during the tumult of the Revolutionary War and the contentious postwar shaping of the early republic, there was an awful lot to hip, hop, and rap about.

How fitting it is, then, that Miranda’s Hamilton has Hamilton and Jefferson engaged in rap battles. (We’ll sample one shortly.) And how doubly fitting that the choreography, by Andy Blankenbuehler, has an ensemble of sinewy dancers in nearly constant motion—leaping, floating, and acrobat-contorting in dynamic patterns that say Fellow Americans, our world is changing. And we’re the ones changing it.

Maybe you’re not a fan of hip-hop. But maybe you will be, after seeing Hamilton. As a somewhat-fan myself—the kind who can get into it, but doesn’t actively follow the genre and its sub-genres—I went to the musical wondering if I could handle two and a half hours’ worth of rap cadences. I came away convinced of this:

Hip-hop is absolutely the right vehicle for a show about a revolution. 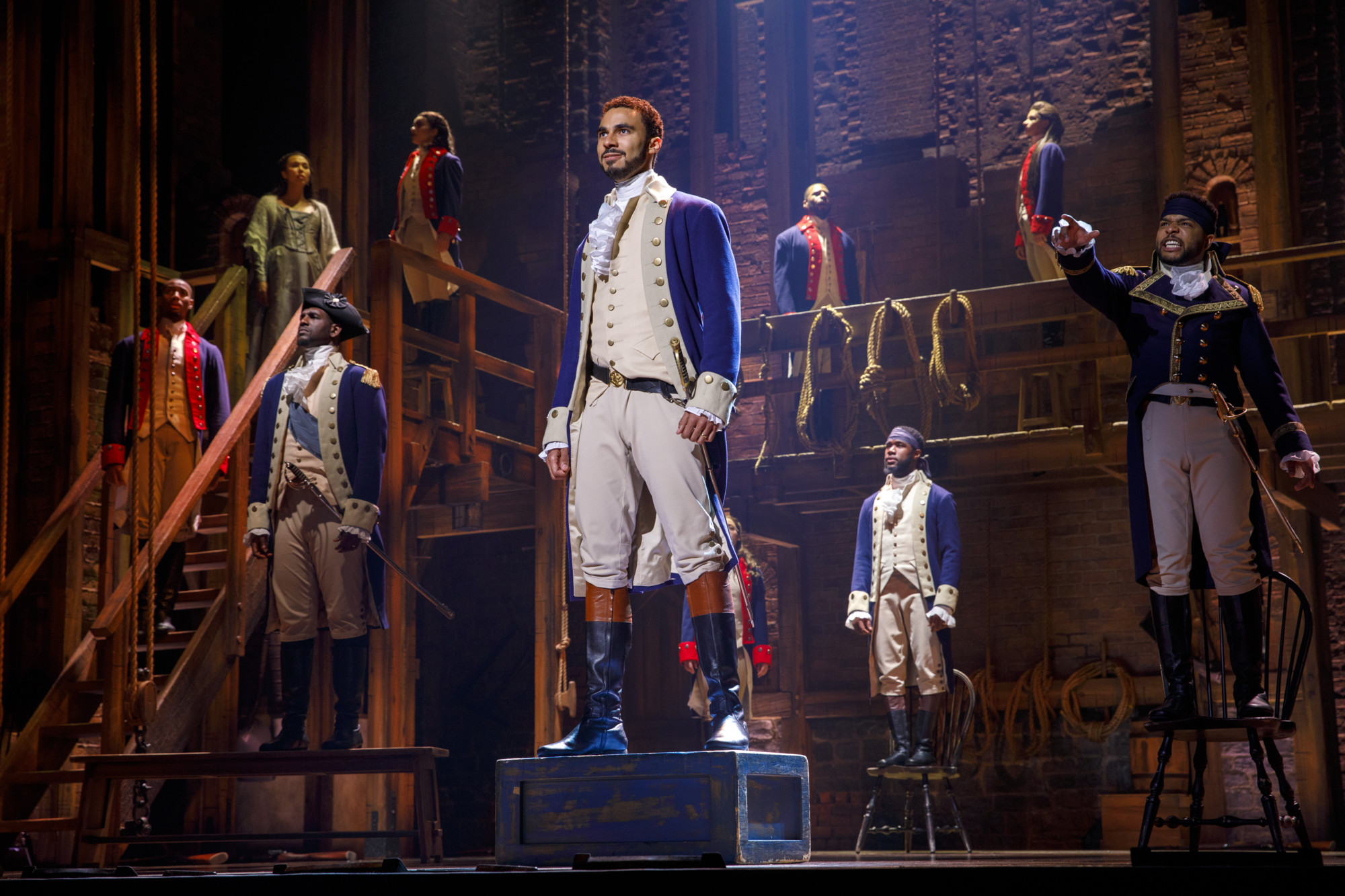 Furthermore, Hamilton does not consist only of wall-to-wall street rap. Although there’s plenty of it, some songs are simply sung. (A notable example is “You’ll Be Back,” King George’s exceedingly daffy love song to the American colonies. The number strikes comic-satiric notes that sound like Gilbert and Sullivan with a touch of Kurt Weill.) Similarly, most dancing is neither hardcore b-boy nor bouncy, billowy Broadway, but a sort of blend—which, again, comes across as more than the sum o’ the two.

If you’d like a brief recap of the show’s story line, good luck. Alexander Hamilton led a fantastically busy and complicated life, intertwined with the lives of numerous men and women who waged war, politics, love, and intrigue either with or against him. Lin-Manuel Miranda has tried to put as much of it as he possibly could into Hamilton. Amazingly, most of the time, it works.

There are some breathless stretches, to be sure. One comes at the very start, where Hamilton’s childhood and youth on the tiny island of Nevis are summed up in a single opening number, which begins with a question:

“How does a bastard, orphan, son of a whore and a / Scotsman, dropped in the middle of a forgotten / spot in the Caribbean by providence, impoverished, in squalor, / grow up to be a hero and a scholar?”

A chorus of rapid-fire replies carry Hamilton from the island to New York City in the early 1770s, where pre-war rebellion is brewing. The teenaged immigrant joins the resistance, and from there it’s a whirlwind. Hamilton rises up the ranks, serving with honor in the Revolutionary War and later as the country’s first Secretary of the Treasury. He meets and mingles with memorable characters, including: Eliza Schuyler (played here by Hannah Cruz), who becomes Hamilton’s faithful and long-suffering wife; George Washington (Paul Oakley Stovall), his stern mentor and patron; and Aaron Burr (Josh Tower), who begins as a wily confidant and winds up killing Hamilton in a duel. Not to mention that throughout the many interpersonal dramas which arise, a nation is being born.

Oh yeah. That’s a load. Perhaps the show’s greatest “technical” accomplishment is just keeping all of the moving pieces together, making them (mostly) understandable, while at the same time making them sing. And dance!

Bringing the Revolutionaries to Life

From the OCR, you may know Thomas Jefferson’s grand entry number, “What’d I Miss?” He sings it upon returning from a stint as ambassador to France. In the touring production at the Benedum, actor Bryson Bruce, as Jefferson, also dances it delightfully, strutting and high-stepping across the stage like a big-time player back to take the Big Apple by storm.

And okay, maybe the real Jefferson wouldn’t have done that. His personal style was less flamboyant—he was more of a philosophy whisperer than a street-corner shouter—but he did have a giant ego, and the song-and-dance routine nails it.

The same actor, Bruce, doubles as the Marquis de Lafayette and captures that character’s energy, too. When Lafayette arrives from France earlier in the show, eager to fight in the American Revolution, he leaps atop a table to announce his presence in rap, then leaps down muscularly amid his new comrades—a strong sequence that clearly communicates Mes amis, I am ready to rumble.

Other sequences are likewise cool in how they make hip-hop represent early America. It is very unlikely that the real Eliza beatboxed while her son rapped for papa Alexander. But actress Cruz, as Eliza, beatboxes like a champ, and you gotta see it to believe how well it works.

Ditto for the rap battles. Astoundingly, they convey intricacies of public policy. Consider this sample from “Cabinet Battle #1,” where Jefferson and Hamilton debate Hamilton’s postwar financial plan for the new country, which involves the federal government assuming debt of the individual states.

“Ooh, if the shoe fits, wear it. If New York’s in debt—why should Virginia bear it? /  Uh! Our debts are paid, I’m afraid. /  Don’t tax the South ‘cause we got it made in the shade. / In Virginia we plant seeds in the ground. / We create. You just wanna move our money around. / This financial plan is an outrageous demand, /  and it’s too many damn pages for any man to understand … Look, when Britain taxed our tea, we got frisky. / Imagine what gon’ happen when you try to tax our whisky!”

“Thomas, that was a real nice declaration. /  Welcome to the present, we’re running a real nation. /  Would you like to join us, or stay mellow, / doin’ whatever the hell it is you do in Monticello? / If we assume the debts, the union gets / a new line of credit, a financial diuretic. / How do you not get it? If we’re aggressive and competitive, / the union gets a boost. You’d rather give it a sedative? / A civics lesson from a slaver? Hey neighbor, / your debts are paid because you don’t pay for labor … And another thing, Mister Age of Enlightenment. / Don’t lecture me about the war. You didn’t fight in it.”

At times like this in Hamilton, one wishes that the late Pittsburgh sportscaster Myron Cope was still around. I’d love to hear Myron say “Yoy!” and “Double yoy!” 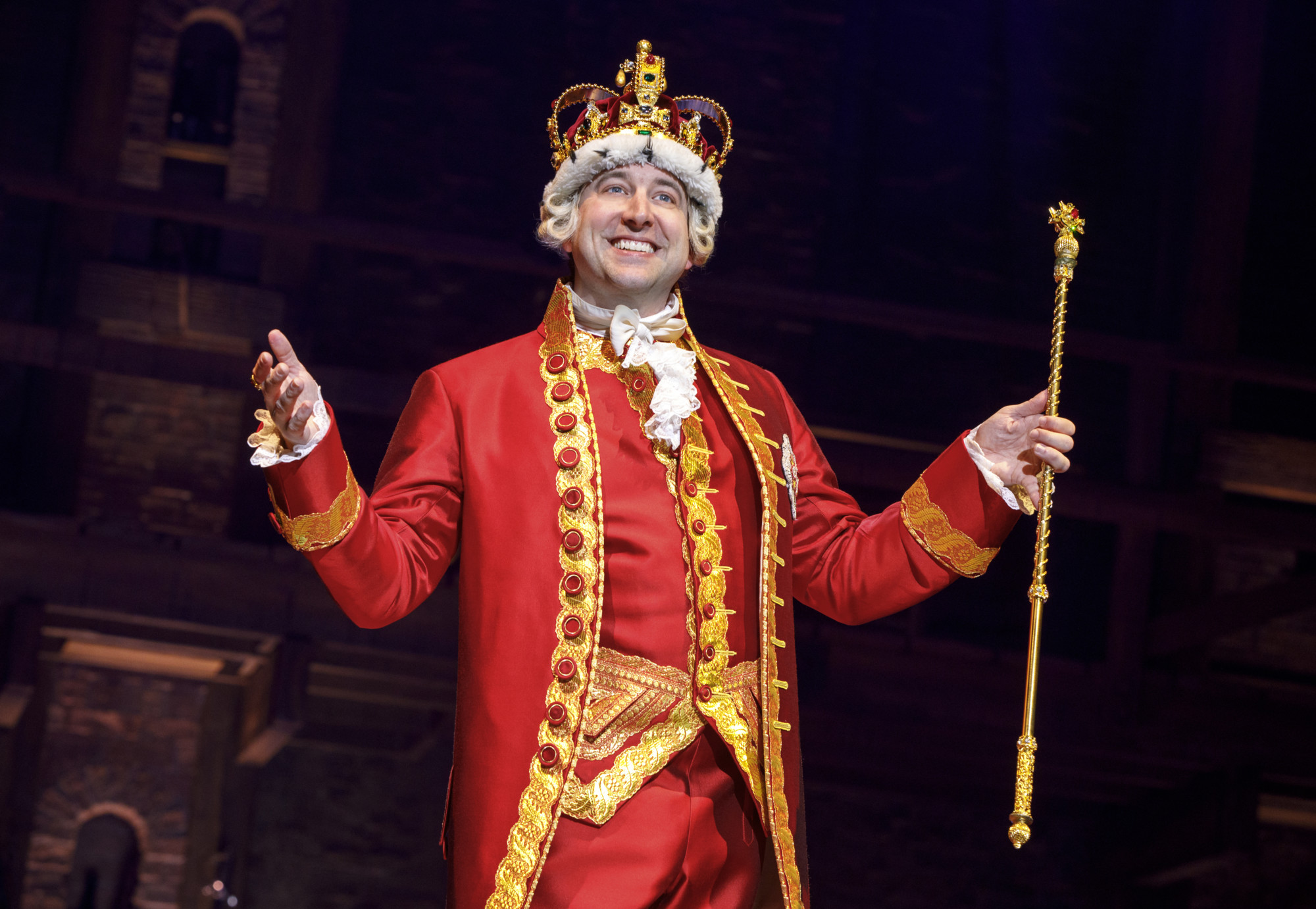 England’s King George loses the war but has a great song in ‘You’ll Be Back,’ his deranged serenade to the disloyal Americans—and that’s Pittsburgh native Peter Matthew Smith playing the King on the tour that visits us.

The Wonderment, the Phenomenon, the Split Personality

Hamilton has sequences of graceful wonderment, too. The entire scene in which Alexander meets and courts Eliza, done to the songs “Helpless” and “Satisfied,” unfolds magically, tenderly. Helping achieve the effect is a rotating turntable (actually, a concentric pair of them) concealed in the stage floor. When activated—in this scene and others—the turntables allow actors to glide around as they move.

The courtship scene is like the good old Broadway romantic scenes that good old musical theater fans love. So, in a sense, Hamilton offers something for everyone. It has the hip-hop beats to draw new younger fans to the theater, combined with Broadway aspects to draw traditional fans to hip-hop. Add to these the artistic originality, the casting diversity, and the socio-political significance of the subject matter, and you can start to see why the show is such an unprecedented hit.

The show does have shortcomings. Given its ambitious scope, there are patchy, hurried spots where exposition is crammed in, while some character development is not as full as it could be. (Although to be fair, Les Miz exhibits the same symptoms—a result, in that case, of adapting a huge novel for the stage—and few people seem to mind.)

Further, Hamilton has what I’d call a split personality. Acts One and Two differ markedly in tone and emotion, to the extent that they can feel like related but different musicals.

Act One, which deals with the Revolution and the winning thereof, moved me the most. It has an epic, stirring momentum that somehow grabbed me inside the rib cage, right around my normally un-warlike heart. By intermission I was almost in tears. Act Two is more intricate and personal, switching between early-U.S. political controversies and various dilemmas and tragedies on Hamilton’s home front. Although I found it artful, and sometimes touching, it didn’t grab me the same.

But here’s the kicker. At the end, as we’re filing out of our seats, I see a friend coming up the aisle. He’s an experienced theatergoer whose judgment I hold in high regard. So I give him the palms-out gesture: Whaddaya think of the show? He says, “It’s good. I liked the second act better.”

Go figure. I think that whatever you like, Hamilton is going to give it to you.

Hamilton, with book, lyrics, and music by Lin-Manuel Miranda, was inspired by Ron Chernow’s historical biography Alexander Hamilton. The touring production follows the show design of the Broadway original, directed by Thomas Kail. Choreography is by Andy Blankenbuehler, music supervision and orchestrations by Alex Lacamoire, and scenic design by David Korins.

For showtimes and tickets, visit the Trust Arts webpage or call 412-456-6666. You can also enter the online lottery for a shot at $10 tickets. And a tip: Unless you’re seated close to the stage, bring opera glasses, a.k.a. little binoculars. They’re affordable and will enhance your viewing pleasure in big venues for years to come.

Hamilton is presented as part of the PNC Broadway in Pittsburgh series through Jan. 27 at Benedum Center, 237 7th St., Cultural District.