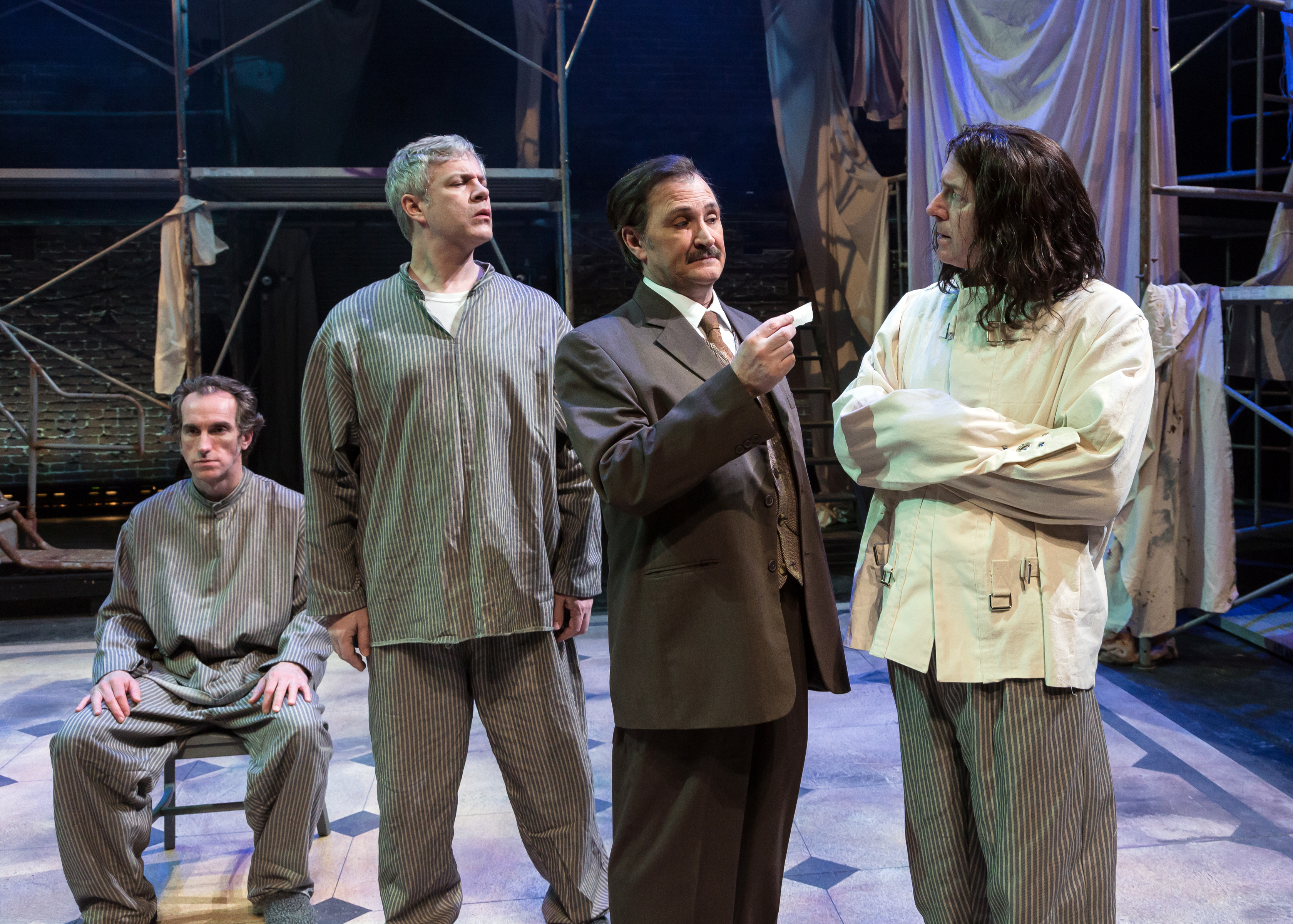 So, my wife and I went to see Kinetic Theatre’s Holmes and Watson. Heading out the door with the crowd afterward, I said to her, “How the heck am I supposed to review this?” She said, “I heard another guy saying the same thing.”

The play is a mystery with many twists that cannot be revealed. The identity of the other critic is a mystery, too; he vanished into the misty night. Stick with me and I’ll give you the best review possible.

Bottom line first: Anyone who enjoys detective stories should get a kick out of Holmes and Watson. Along with a plot that will test your powers of deduction, the play has memorably creepy characters and skillfully acted action, amid a sinister air of danger ever lurking. And there’s just enough humor to spice up the mood without turning the play into a spoof.

Did I say the script is perfect? No, because it isn’t—but the Kinetic production brings out the punch in its strong points. Also, don’t expect profound depths of meaning. This is Sherlock, not Shakespeare. But Sherlock tales have a distinctive allure, and Holmes and Watson—by American playwright Jeffrey Hatcher—is an intriguing follow-up to one of the most famous stories in the “canon” of originals by Sir Arthur Conan Doyle.

All the Backstory You’ll Need

Let us return to the fateful year 1893. Science and industry were shaping the modern world that we now know. Queen Victoria reigned over a British empire upon which the sun never set. And of all the great men in England, the cleverest was a fictional detective.

Sherlock Holmes had captured the spirit of the times and the public’s imagination. Although he was quirky, and therefore human, he had talents and powers of mind that seemed superhuman. Chronicles of his exploits appeared monthly in The Strand Magazine, each one read eagerly and widely.

Holmes was so popular that his creator decided to kill him. Doyle, a Scottish physician turned author, had higher literary aspirations. He figured the only way to pursue them was to be rid of the character who’d gotten him typecast as a mystery writer. Thus the December 1893 issue of The Strand carried a story titled “The Adventure of the Final Problem.”

In the story, Holmes is being pursued by the evil Professor Moriarty, mastermind of a far-flung criminal gang. Moriarty catches up to Holmes in the Swiss Alps. There, on a ledge above a high waterfall, signs of a struggle are found. Evidently both men have tumbled to their deaths in the unsearchable gorge far below.

This exit strategy didn’t work. Readers kept clamoring for more Sherlock until eventually, Doyle obliged. The story had left a sliver of hope—we’re not sure the resourceful detective is dead; perhaps he escaped somehow—and Doyle used that loophole to continue the Holmes saga in further episodes.

The loophole also left room for alternative sequels. Which brings us to the drama at Kinetic Theatre.

Holmes and Watson is set a few years after Sherlock’s presumed death. The lights come up on his former companion and dear friend, Dr. Watson (played by Daryll Heysham). Grimly, Watson informs us that he’s been saddled with an unsavory task: exposing the many impostors who say “I am Holmes.”

Now he must investigate a strange report. An insane asylum on a remote island has admitted three new patients, all claiming to be Holmes. 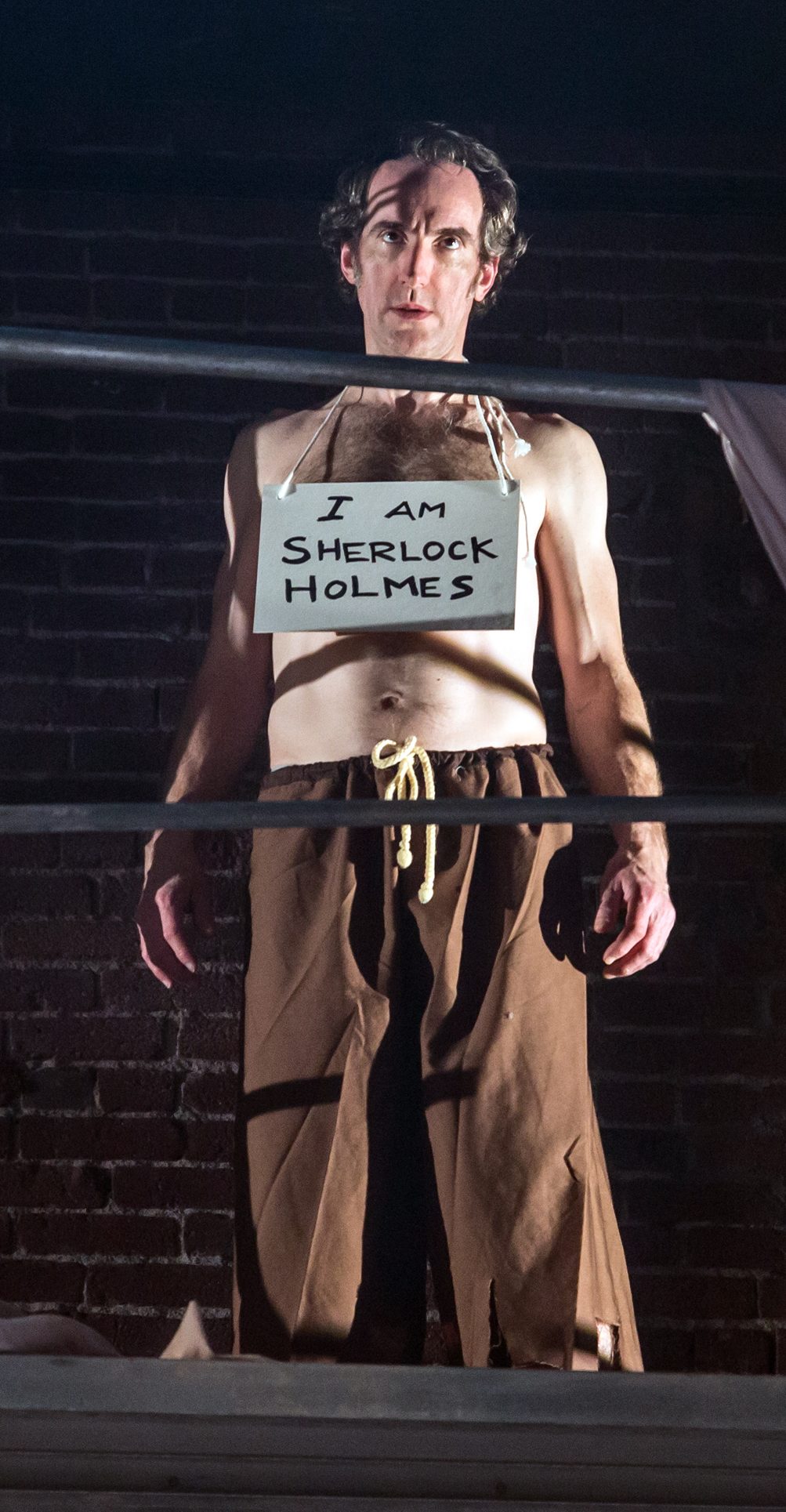 Off we go to meet the trio. They’re an odd lot indeed—and yet each, in his deranged way, proves oddly persuasive.

Holmes #1 (Darren Eliker) is eloquent and rational, exactly like the real Holmes, until he snaps and has to be hauled away.

Wild-eyed Holmes #2 (David Whalen), strapped in a straitjacket, rises above the madness that has gripped him to display the incisive cunning of Sherlock.

Holmes #3 (Gregory Johnstone) is as mute as a sphinx, apparently from an unknown trauma, but when finally coaxed to speak he is calm and convincing.

Each tells a different story of how he survived the meeting with Moriarty at the waterfall. Each can explain why he’s been roaming incognito since then. Any one of them could’ve plausibly had his wits scrambled by the ordeal. Yet none commits a glaring faux pas that would tag him as bogus in Watson’s eyes.

The plot thickens, via flashbacks and complications which I will not describe. Meanwhile the asylum’s staff members add to the aura of weird uncertainty.

Chief physician Dr. Evans (Tim McGeever) is glib and cheerful but also the skeptic-in-residence. He even warns poor Watson that Watson’s own memories and accounts of Sherlock Holmes may be inaccurate, given that we all bend reality to suit ourselves.

Assisting in minor roles are a hulking orderly (James Keegan), who disciplines the inmates with brutal efficiency, and a stern but servile matron (Gayle Pazerki), who provides some touches of good-cop to counter the orderly’s bad cop and the head man’s confusing cop.

Altogether you have a play that’s like a disorienting dream. Reality and illusion merge and shift. Even the goal—the quest to discover whether Sherlock is here, or lies five fathom deep—flickers elusively at times, like a film that won’t stay in frame.

By the conventions of mystery, these are desirable effects, and Holmes and Watson delivers them. Kinetic’s stage set—a bare tile floor, loomed over by towering rows of scaffolds draped in white sheets—evokes the appropriate feeling: It’s clinically spooky. So are the actors. They make a mighty fine mind salad.

And the ending, which comes out of a series of reverses like an NFL trick play from bedlam, defies you to guess it. 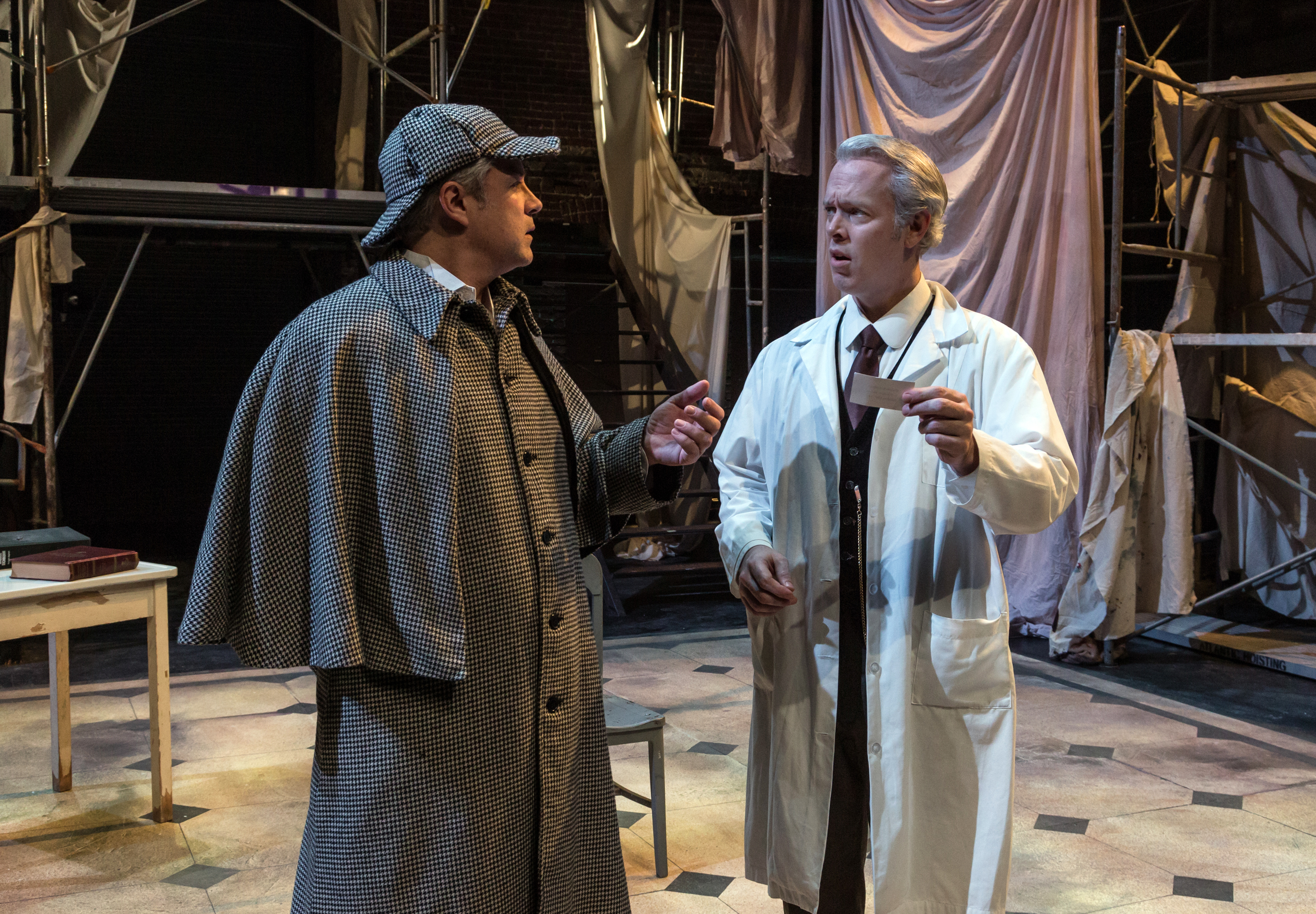 Two Beefs and a Rebuttal

Imperfections in the script? I was struck by two. For openers, you must believe that Watson wouldn’t recognize the real Holmes instantly, or at least very quickly. And yes, Holmes is a master of disguise and artifice, and yes the Moriarty thing plus a few years on the lam could change a fellow somewhat, but still. Suspension of disbelief is the price of the suspense you get.

Second, it seems to me that the play misses an opportunity. Though Shakespeare it ain’t, I’d have liked it to delve more deeply into … oh, forget it. Into matters that can’t be discussed without setting off spoilers. See the play and then hit me up if you want to know what I thought it missed.

For now, I leave you with expert opinions. My wife, an astute fan of modern mysteries, loved Holmes and Watson and followed it easily despite limited knowledge of the Sherlock canon. The friendly couple seated next to us, longtime Sherlock connoisseurs, added their thumbs up.

Jeffrey Hatcher’s Holmes and Watson is directed by Andrew Paul, Kinetic Theatre’s producing artistic director. The play premiered in Phoenix, Arizona, last year and this production is a Pittsburgh first. Props to everyone on the Kinetic tech team for staging it well.

Through March 4 in the New Hazlett Theater, 6 Allegheny Square East, North Side. For showtimes and tickets visit Kinetic on the web or call 1-888-718-4253.