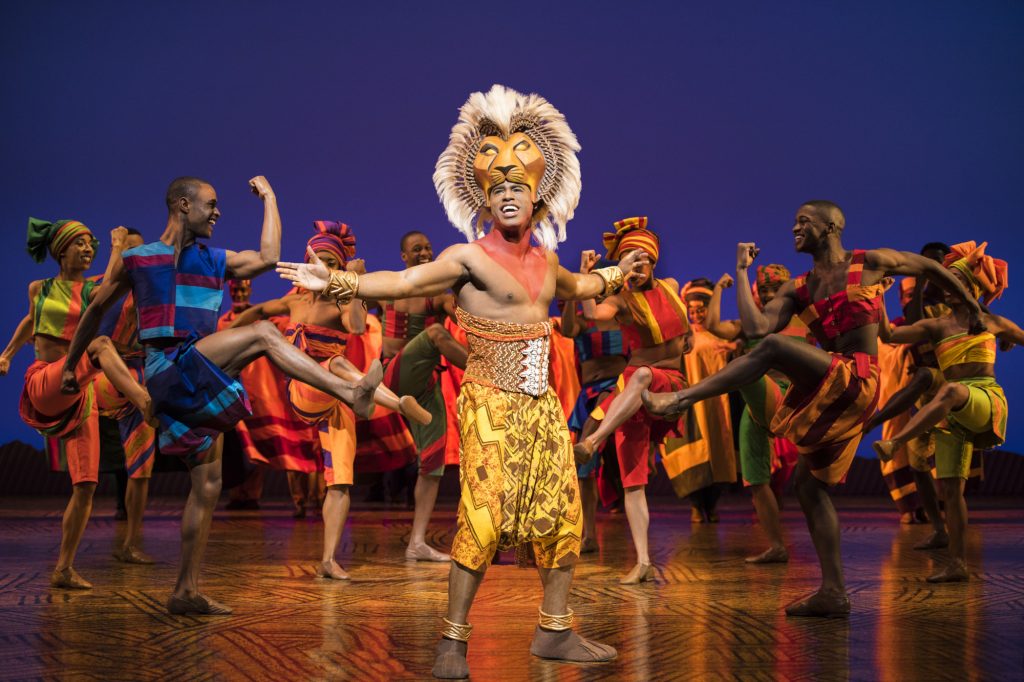 It’s been 25 years since the advent of Disney’s The Lion King franchise in 1994 with the debut of the animated film. It was turned into a musical for the stage in 1997 by creative genius and director Julie Taymor. Nominated for 11 Tony Awards in 1998, it won five including Best Musical. Despite the increasing age of the franchise, it continues to amaze. The North American touring company of The Lion King is onstage at the Benedum Center through September 29 as part of the Pittsburgh Cultural Trust’s PNC Broadway in Pittsburgh series. There are several main pillars responsible for the success of The Lion King.

The story is about a pride of lions whose lives revolve around a natural rock structure called Pride Rock in their Pride Lands. The Lion King, Mufasa (Gerald Ramsey), is trying to raise his rambunctious son Simba (Jared Dixon, and young Simbas, Richard A. Phillips, Jr. and Walter Russell III) the right way—to respect one’s history and ancestors and do right for the pride. Mufasa’s evil brother, Scar (Spencer Palchy), tries to undermine the king and his son while building a power base with the hyenas. Rafiki (Buyi Zama) is a mandrill who calls the pride to Pride Rock and is a wise associate to the lions. A smart-alec hornbill, Zazu (Greg Jackson), is an advisor to the king. Nala (Nia Holloway, and young Nalas, Brilyn Johnston and Celina Smith), is a powerful lioness and friend of Simba. Sarabi (Chante Carmel) is the king’s wife and a powerful feline in her own right.

A coup is brewing, as evil Scar (Spencer Plachy) plans to take over the Pride Lands, with a pack of hyenas as his minions. (photo: Deen van Meer, © Disney)

The plot mainly focuses on Simba who is deceptively lead astray by Scar. Simba leaves the pride and meets new friends, a meerkat named Timon (Nick Cordileone) and his warthog friend, Pumbaa (Ben Lipitz). While wandering with these new friends, Simba learns that his pride is in trouble and he must overcome his own fears to return and help them.

It’s a well-crafted tale that follows twin tracks of honor and respect, and comedy and playfulness. All of the actors turn in wonderful acting and singing performances. Ramsey is regal and worthy of respect as the king, Mufasa. Dixon and the younger Simbas portray a younger lion’s curiosity and playfulness. Scar is brilliantly played by a strong-voiced Palchy with snark, sarcasm, and fantastic body movements. Holloway and Carmel play their strong female characters very well. Fantastic comic relief is provided by Jackson as Zazu, Cordileone as Timon, and Lipitz as Pumbaa. The hyenas Banzai (Keith Bennett), Shenzi (Martina Sykes), and Ed (Robbie Swift), are fun and scary in their roles. The book for The Lion King is by Roger Allers and Irene Mecchi.

Music in The Lion King both includes and expands upon songs from the animated film. Elton John composed the movie’s numbers, with lyrics by his longtime collaborator, Tim Rice. Additional music and lyrics for the stage version are by Lebo M, Mark Mancina, Jay Rifkin, Julie Taymor, and Hans Zimmer. Rafiki opens the show with a musical call for everyone to gather at Pride Rock. Her call is one of the vocal highlights, but more follow. There’s a touching scene and song by Mufasa and the ensemble, “They Live in You,” in which the king points to the stars and sings to young Simba, saying that their former ancestors live within them. The song is reprised in the second act with the lyric changed to “He Lives in You.” Scar and the hyenas sing the dark song “Be Prepared” while at the Elephant Graveyard. The song is also reprised with a heavy percussion line of congas and drums running through it. There are two percussion stations with a percussionist on stage at both stage right and left. The double percussionists add to the fine playing of the pit orchestra under music director and conductor, James Dodgson. 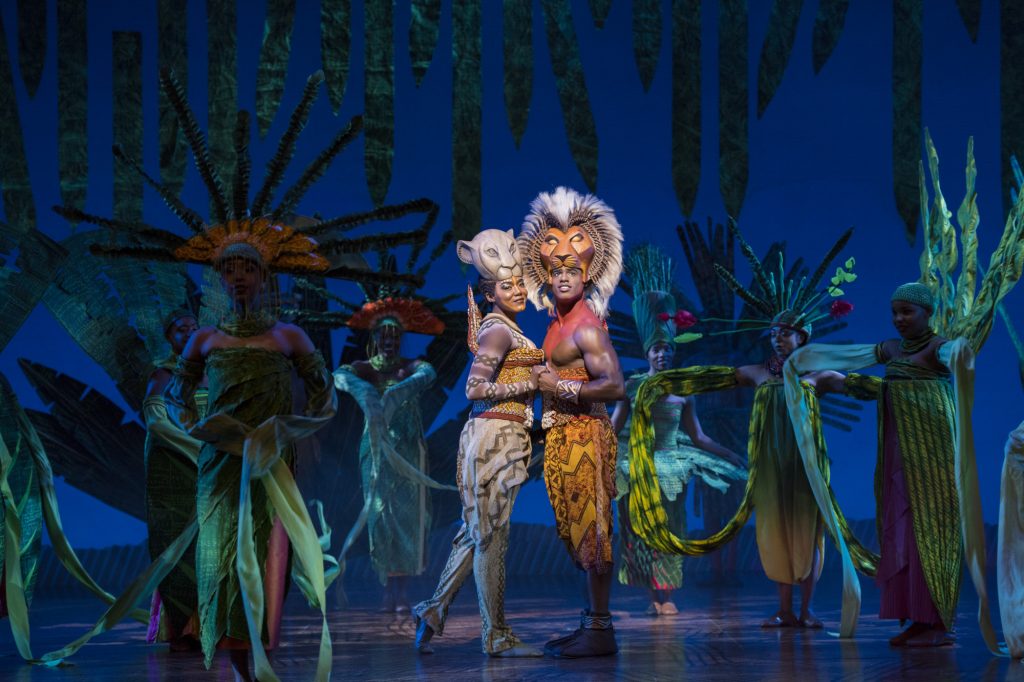 Young Simba steps into the spotlight for a bouncy number with Young Nala, Zazu, and the ensemble on “I Just Can’t Wait to Be King.” The hyenas’ “Chow Down” is a forceful rocker. “Grassland Chants” has a very pleasing percussive element and African vocals.  And of course there are the classic Lion King songs from the film, including “Can You Feel the Love Tonight,” “The Circle of Life,” which opens and closes the musical, and “Hakuna Matata.” All three songs were nominated for an Academy Award for Best Original Song in 1994 with “Can You Feel the Love Tonight” winning.

The puppets developed by Taymor and Michael Curry are spectacular. The puppet costumes were designed to integrate the performers and their puppets, not to completely disguise the humans. They did a pretty good job with the giraffes, though, as it took me a minute to find the person in them. And with the elephant puppet it was even harder to find the people. The meerkat, hyena, cheetah, and warthog puppets are amazing too. Rafiki the mandrill’s costume has a circular patterned cushion on Zama’s rear end, for the primate’s derrière. Also magical are several silhouette puppets that appear during the show.

Pride Rock is a tall, articulated, automated set piece on which many scenes are set. The actors have  to have good balance and stamina to run up the rock and sing or give an oration. It’s a wonder that no one falls off it. The Elephant Graveyard set is a sight to be seen, with large elephant bones strewn about. The stampede scene is very mystical and innovative in its concept, lighting, and use of puppets. You see the stampede of wildebeests start far away, and then it comes ever closer. 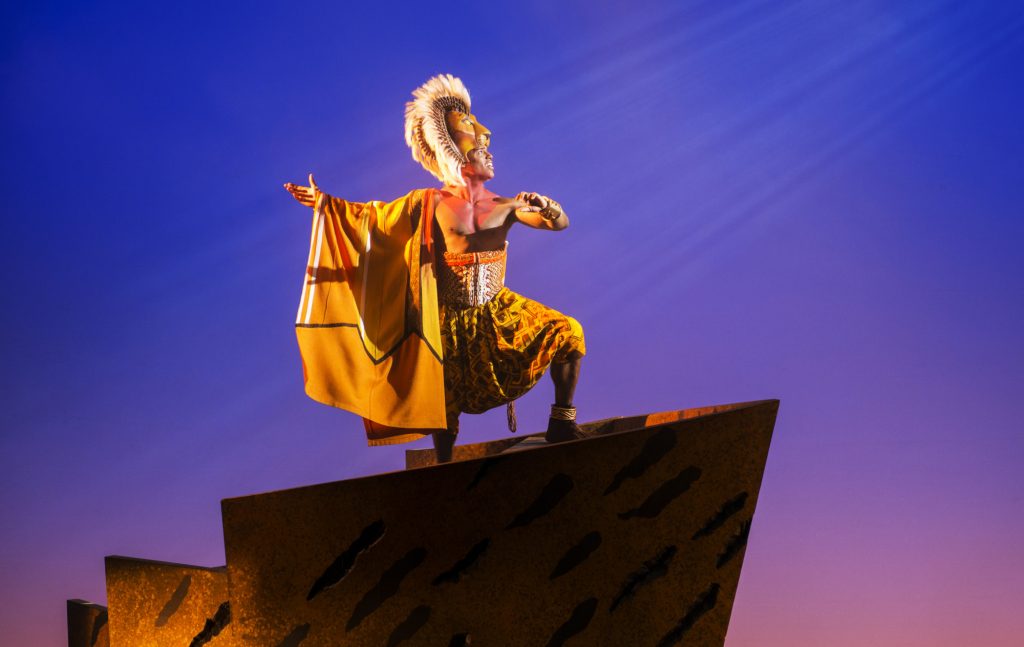 It’s a tricky climb to the top of Pride Rock, but Simba aims to claim his rightful place. (photo: Deen van Meer, © Disney)

The Lion King musical has had “legs” because it is a strong story with the familiar elements of love, jealousy, family, hate, and hardships. It is produced in such a creative way that even if you’ve already seen it you want to relive its magic and be amazed anew. The opening “The Circle of Life” scene is one of the most fantastic openings one will witness, with all the actors and puppets converging on the stage.

See our related story, “A Fascinating Look Behind the Scenes of Disney’s The Lion King.”