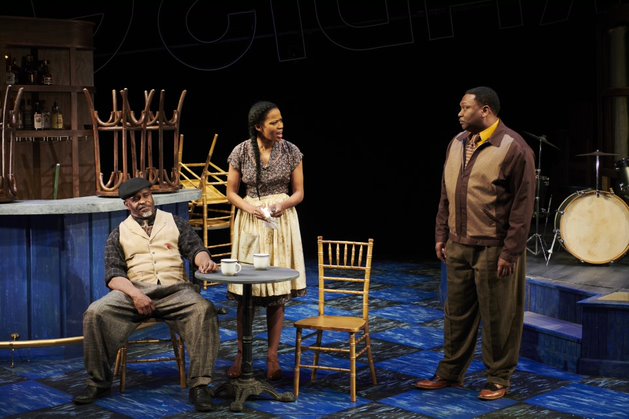 Playwright and Detroit native Dominique Morisseau was influenced by the work of August Wilson. She saw what his powerful plays accomplished in reflecting Black life in Pittsburgh during certain historical periods over a 100 year arc. Wilson magnificently showcased these African American period pieces with complex characters and rich dialogue in his 10-play Pittsburgh Cycle.

Morisseau created a 3-play cycle, The Detroit Projects, that showcases her Detroit-based stories of Black life there. Morisseau’s play Paradise Blue, onstage at City Theatre through April 3, is the third play in that cycle. It’s set in a historically Black neighborhood in Detroit called Paradise Valley.

Much like Pittsburgh’s Hill District, where all but one of Wilson’s plays were set, this was a neighborhood where all classes of Black people lived. Both neighborhoods had successful Black merchants and professionals. In both, jazz was the lifeblood of the entertainment scene with talented local players and many big names often passing through. Both neighborhoods also suffered under projects that promised urban renewal, but were too often just about “Negro removal.”

Another very interesting bridge between City Theatre’s production of Paradise Blue and Wilson’s plays is actor Wali Jamal, who portrays the character Corn (Cornelius), is that Jamal has acted in all 10 of Wilson’s Pittsburgh Cycle plays.

Paradise Blue is set in the Paradise Club in Detroti’s Paradise Valley neighborhood. The year is 1949 and the club is no paradise for its owner Blue (Rafael Jordan). He is a talented trumpet player and leader of the club’s jazz combo. Blue is troubled by several things. One is trying to find the “Love Supreme,” the perfect piece of trumpet playing that has so far eluded him. He is also haunted in his mind by his late father, the prior owner of the Paradise Club. The memory of his mother also brings him discomfort at a lesser level. 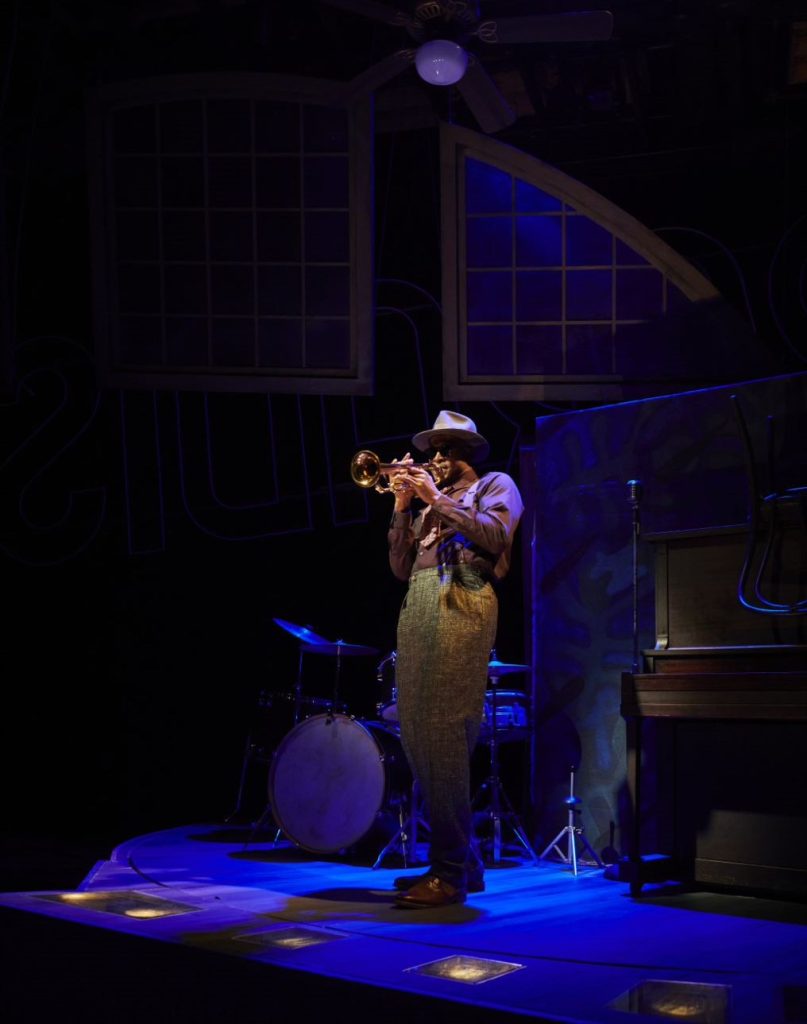 Blue (Rafael Jordan) is on a quest to find that perfect piece of trumpet playing that so far has remained elusive. (Photo: Kristi Jan Hoover)

Blue pays his musicians after their gigs to make sure they complete the shift. He also charges extra for hot sauce on sandwiches, and ice cubes in drinks. His cover charge is higher than in other places in Paradise Valley. He’s also a hothead who just fired the combo’s bass player and can explode like a loose cannon on just about anyone, including his woman, Pumpkin (Melva Graham). Blue and his negative energy are conveyed wonderfully by Jordan.

Pumpkin loves Blue in spite of his faults. She also enjoys memorizing and reciting poetry. Blue has heard her sing beautifully, but almost no one else in the combo thinks she can sing. She waits on tables, makes food orders, cleans, and changes sheets on the beds in the rooms for rent upstairs. Graham portrays Pumpkin with a fantastic lilting quality to her voice that is sublime to listen to.

Corn is the piano player in the combo and the salt-of-the-earth character in the play, always trying to help people with their problems. It’s always wonderful to see Jamal showcasing the mastery of his craft. He even does a scene in his skivvies and provides a lot of comedy to the play.

Monteze Freeland, consummate Pittsburgh actor and City Theatre’s Co-Artistic Director, plays P-Sam. The P is for percussion as he is the combo’s drummer. Freeland plays him writ large, following his urges and emotions, no matter what the consequences.

And last, but certainly not least is Silver (Eunice Woods), a mysterious woman from Louisiana who has traveled from town to town and appears to be staying a while in one of the Club’s upstairs rooms. Silver knows how to wear and not wear a dress and get the men folk running in circles. Her husband was killed by a gunshot to the head, but she keeps the other details close to her chest. Silver is skillfully played by Eunice Woods with great stage presence and dialogue.

It is an uber talented cast of actors playing intriguing characters. 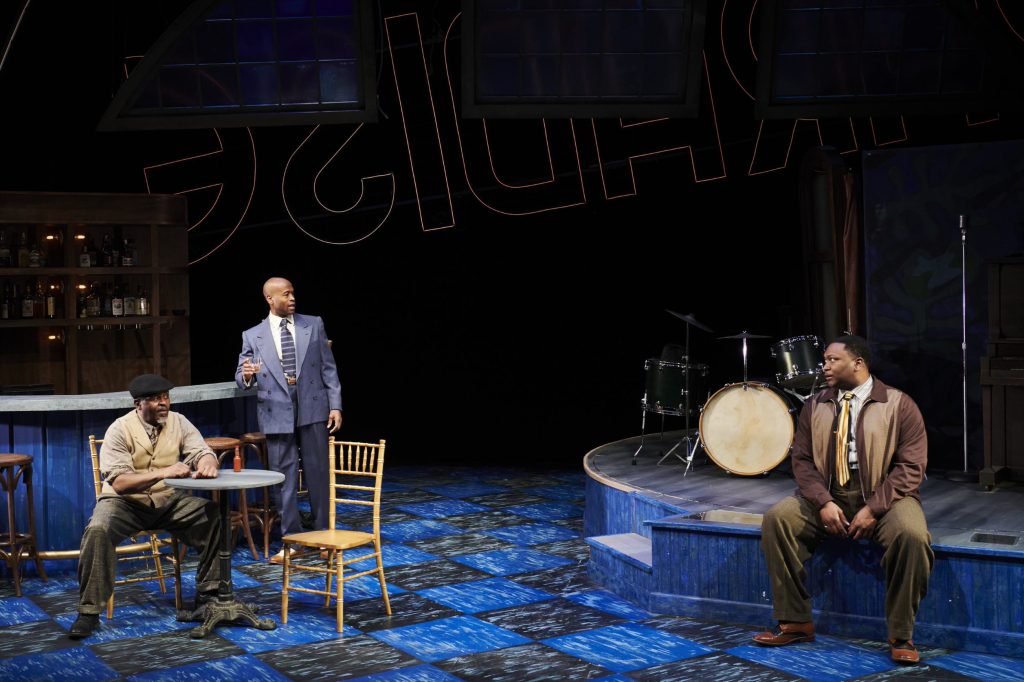 With underlying issues of racism, domestic abuse, and possibly mental illness it would seem that Paradise Blue could be a downer. However, for most of the play it’s a dramedy. The actors do a fine job of moving the plot along with strong humor. There are some very funny scenes, like when Corn is tasked with trying to help Pumpkin become a singer; P-Sam coming into the club very drunk, Silver showing Pumpkin how to use the gun she found when going through her belongings, and Corn being drawn into spider woman Silver’s web.

The government is starting to buy out buildings and land owners for future urban development projects. Blue is on a public list to talk to the government reps about a buyout. He feels that he needs to get out of Detroit or else he is going to die there. He talks about taking Pumpkin to Chicago and performing there. Pumpkin does not want to go, saying that she likes being in Paradise Valley. It’s where she belongs and she likes taking care of the people there.

P-Sam and Silver are both angling separately to buy the club from Blue. This is a plot point that builds into the climax. Corn is feeling pressure from both P-Sam and Silver as they both are working him to convince Blue to sell to them. And Pumpkin is becoming less innocent and more self-aware after P-Sam called her a go-along girl (a woman who doesn’t cause any problems and goes along with whatever her man wants). Silver also fills Pumpkin’s mind with new notions.

Sometimes non-traditional, non-Hollywood happy endings are fantastic, not following the formula can be intriguing. Paradise Blue’s ending, however, is one that I didn’t particularly care for. Now that may also be due to each person’s individual frame of reference. Although it was very shocking and exciting, I didn’t feel that it added much to the story, but life isn’t always completely sensible. Overall, however, Paradise Blue is a very captivating play with its complex characters and dialogue, top-notch acting, and historical insights. It’s very funny too. The opening night audience seemed to enjoy the play very much, rewarding the cast with loud applause and clapping at its conclusion. 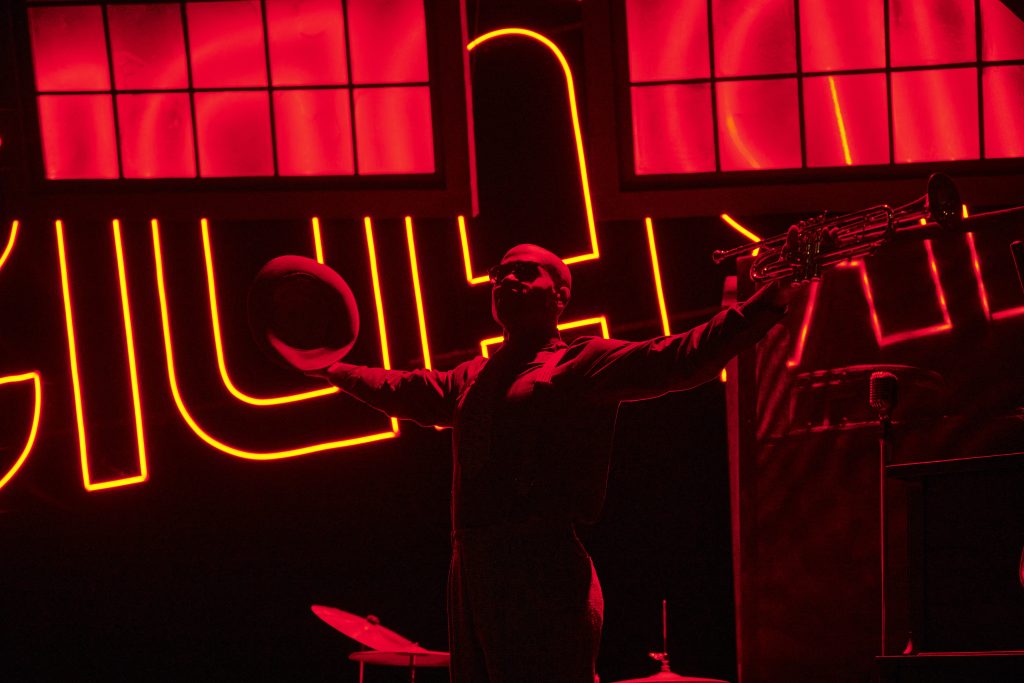 Paradise Blue is directed brilliantly by Kent Gash. In a fast-moving play with a lot of dialogue he keeps it moving seamlessly. The production has original music recorded here in Pittsburgh by composer Theron Brown with assistance from Chris Coles (tenor saxophone), Dwayne Dolphin (bass), James Johnson III (drums), and Tommy Lehman (trumpet). MCG Jazz aided in the production of the score.

Paradise Blue is the third production of Morisseau’s that City Theatre has produced. The two previous ones are Pipeline and Sunset Baby. Paradise Blue has mature language including frequent use of the n-word, and gunshot sound effects. For tickets and more information visit City Theatre’s website or call the box office at (412) 431-2489.