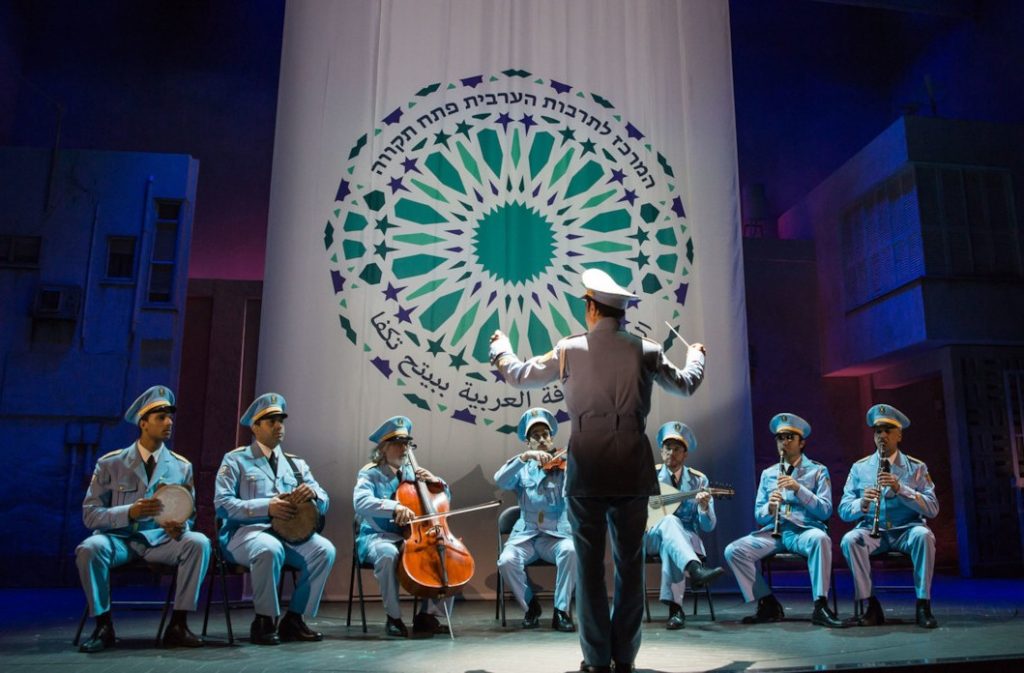 Tony Award-winning musical ‘The Band’s Visit’ is a highlight of the PNC Broadway in Pittsburgh 2019 – 2020 season. (photo: Matthew Murphy)

When the Pittsburgh Cultural Trust sent out invitations to the new-season reveal event for the PNC Broadway in Pittsburgh series, there were hints that a tropical-themed show was on the calendar. That hint was driven home further Monday night when members of the Trust bestowed colorful tropical plastic leis around the necks of arriving guests as they entered the Benedum Center’s grand foyer.

Ken Rice, KDKA TV-2 news anchor, emceed the festivities and kept it on a fun and humorous track. Cultural Trust President & CEO Kevin McMahon also spoke, reporting that the current season broke all records for the subscription series. That’s no big surprise, as the blockbuster Hamilton was part of the season’s offerings. It was also announced, to the delight of the crowd, that Hamilton will be returning during the 2020-2021 season and that renewing subscribers from the upcoming season will have the first opportunity for those tickets. PNC Bank was also acknowledged as the title sponsor of the series for the past 18 years. 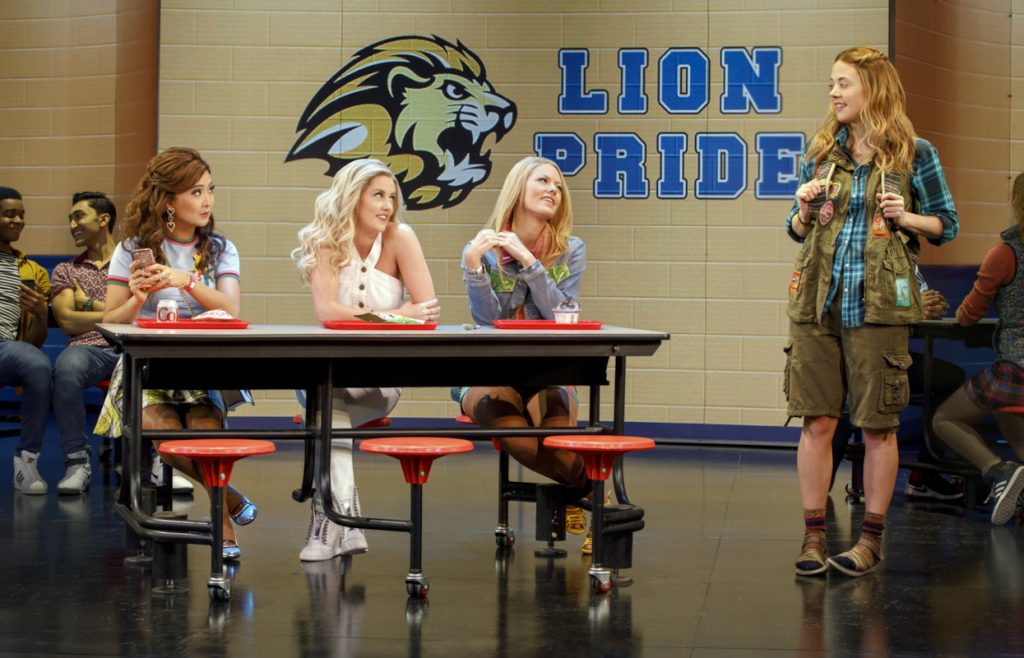 Not everyone can sit at the cool kids’ table in the cafeteria, but everyone is welcome to see Tina Fey’s ‘Mean Girls.’

Rice, after a suspenseful build up, revealed that the first musical of the new season would be Mean Girls (October 28 – November 3). Tina Fey, screenwriter of the Mean Girls film and book writer for the musical, appeared in a short video, saying that she was happy to have the production showing in Pennsylvania as she was from the eastern part of the state. Tee Boyich, who made her Broadway debut in the original cast of Mean Girls as a standby for several roles, sang as character Janis Sarkisian  and delivered a powerful performance of “I’d Rather Be Me.”

The next musical announced was also adapted from a movie, A Bronx Tale (November 19-24), written by Chazz Palminteri and directed on the screen by Robert De Niro. Charlie Marcus from the production was on hand to sing the number “One of the Great Ones.” 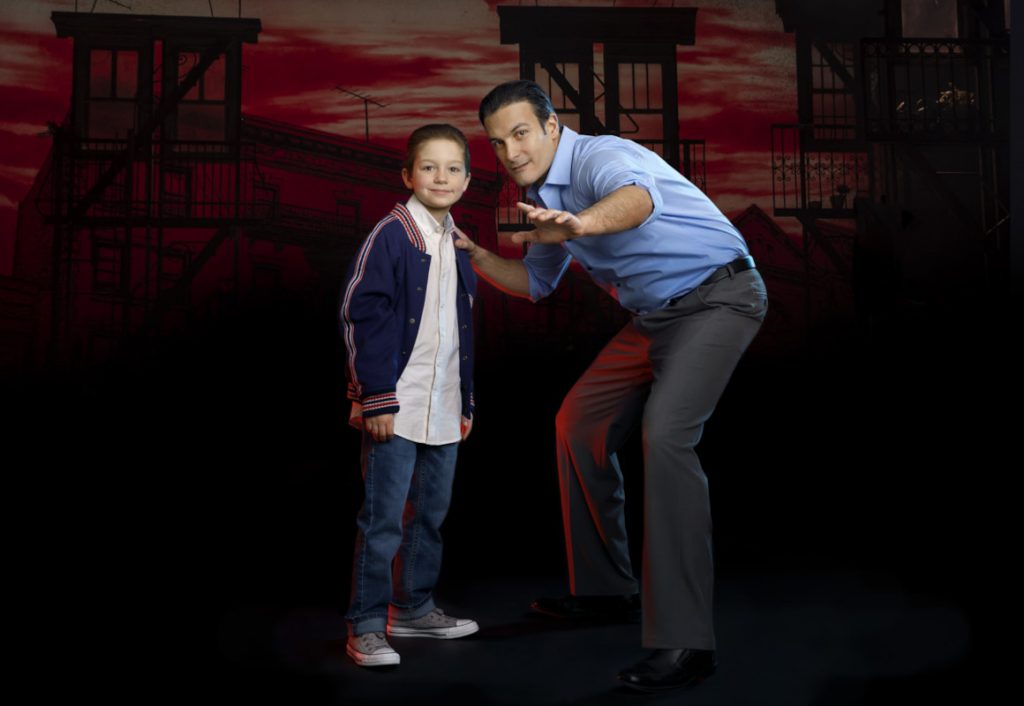 Sometimes the choice between the right and wrong path starts early in life as it does in ‘A Bronx Tale.’ (photo: Joan Marcus)

Jesus Christ Superstar will be on its 50th Anniversary Season tour when it pulls into Pittsburgh (December 31, 2019 – January 5, 2020). The reveal featured a short video address from the renowned lyricist Tim Rice. He along with Andrew Lloyd Webber wrote the mega-hit rock opera album in 1970 which was the basis for the subsequent musical and film. Rice noted that this is a new version of the popular production.

Miss Saigon will be landing in Pittsburgh once again (February 4 – 9, 2020). Cast member Myra Molloy, who plays Kim, gave a beautiful rendition of “I’d Give My Life for You.” In a backstage interview with journalists she said “I am super excited  to visit Pittsburgh for the first time. It’s a beautiful city and the theater is gorgeous.” Molloy joyfully added that she also had a very good breakfast at Pamela’s. 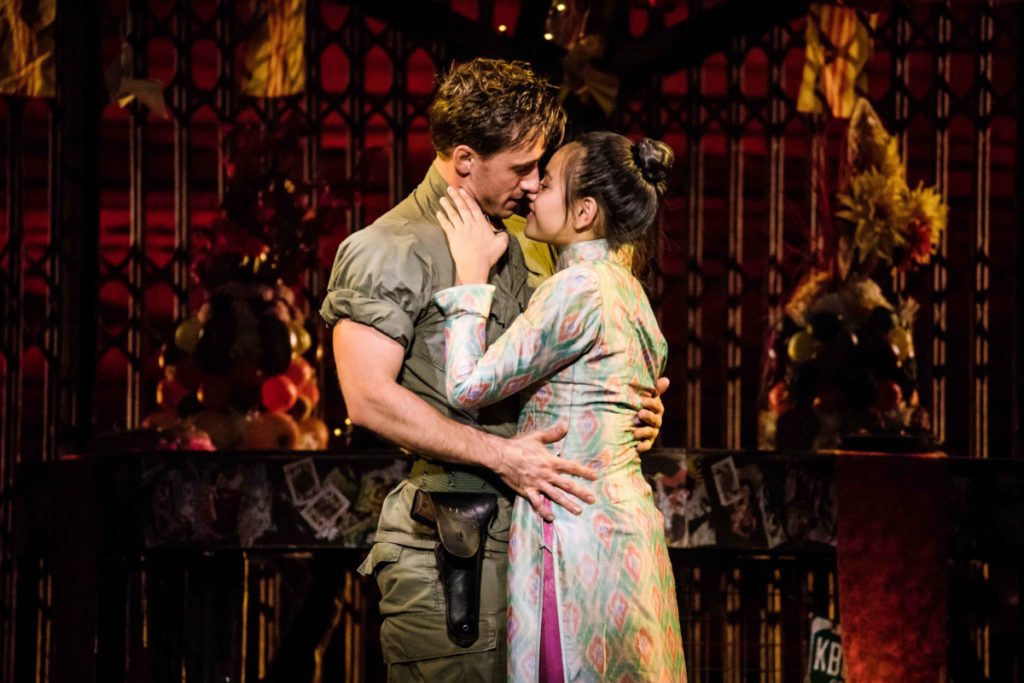 To highlight The Band’s Visit (March 10 -15, 2020), winner of 10 Tony Awards in 2018, including Best Musical and Best Original Score, the actual band from the show came onstage and performed two very pleasant Middle Eastern songs. They even led the audience in a clap-along to the music. After the songs the crowd applauded appreciatively and the band looked very pleased. The group only travels to previews in select cities. Ken Rice cracked jokingly that he hoped the band won’t get mixed up with their destination (as they did in the musical) and go to Pittsburg, Kansas!

Summer: The Donna Summer Musical (April 7 -12, 2020), with its message of female empowerment and a disco soundtrack, was highlighted next with a short video. More than 20 of Donna Summer’s hits are featured in the production. 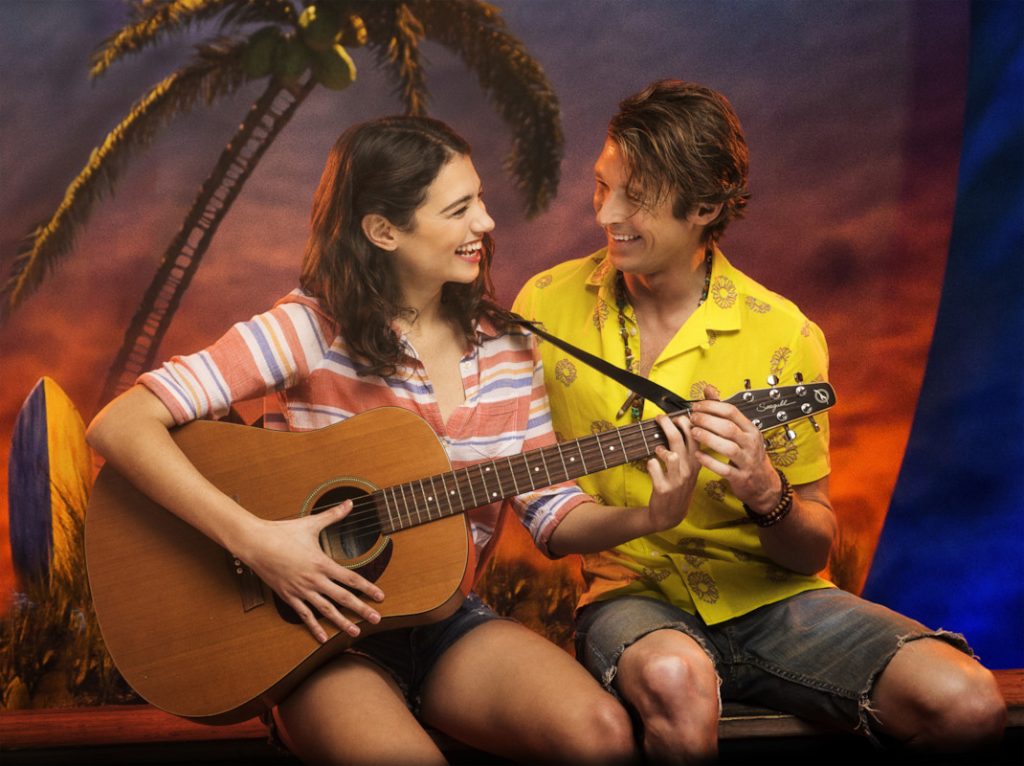 Jimmy Buffett’s ‘Escape to Margaritaville’ is all about fun under the tropical sun.

Next they finally revealed the name of the tropical musical, drumroll please……Jimmy Buffett’s Escape to Margaritaville. Twenty Buffett songs are included in this tropical tale. Buffett himself appeared in a short video stating that he was thrilled that the play would be performed in Pittsburgh. At the end of the announcement Cultural Trust staff, dressed in their tropical print finest, threw out about 50 very colorful Jimmy Buffett Escape to Margaritaville beach balls into the crowd from the stage. For the next five minutes the audience section of the Benedum looked more like a concert scene than a theater reveal event as all the beach balls were batted around by the crowd.

There are also four additional shows that the Cultural Trust denotes as specials. They are The Lion King (May 12 -17, 2020, including a sensory friendly performance), Les Miserables, the world’s most popular musical (November 26 – December 1, 2019), The Illusionists: Magic of the Holidays (December 26 – 29, 2019), and last, but not least, Cats (February 25 – March 1, 2020). After the show audience members could get their photos taken on the stage of the Benedum by photographer Larry Rippel. 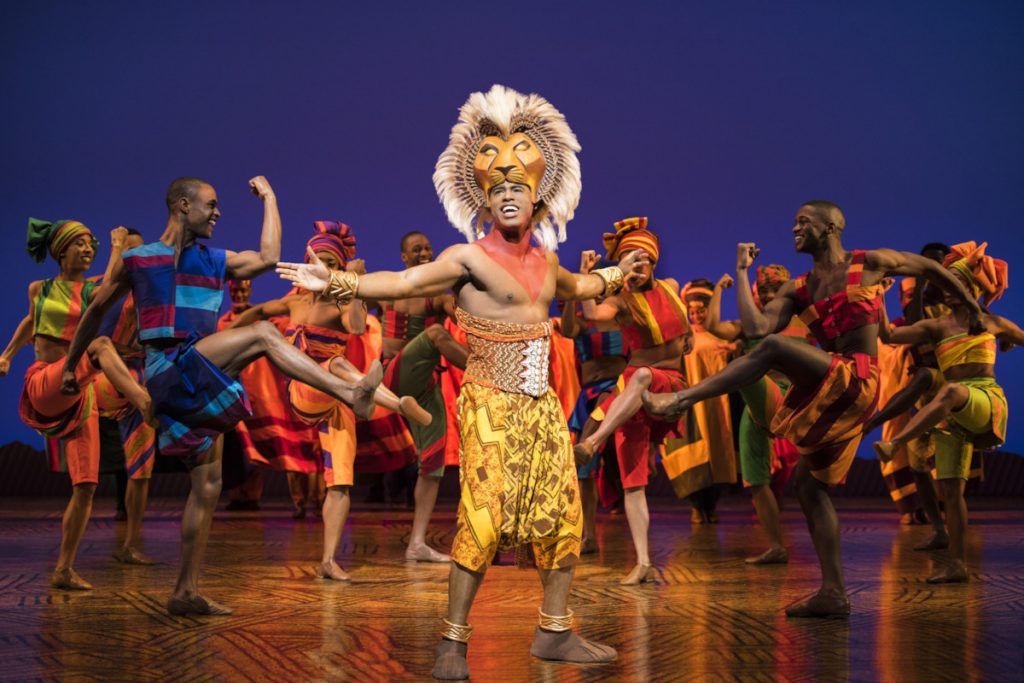 The highly imaginative ‘The Lion King’ is set to prowl the Benedum stage floorboards once again. (photo: Deevan Meer and Disney Co.)

Backstage after the show journalists had an opportunity to speak with Kevin McMahon, the head of the Pittsburgh Cultural Trust, and Marc Fleming, the Trust’s Vice President of Marketing, Communications and Broadway Programming.

McMahon said that he’s really excited about the great lineup for the 2019-2020 season especially the Tony Award-winning The Band’s Visit, Jesus Christ Superstar, Miss Saigon, and Jimmy Buffett’s Escape to Margaritaville. He wryly added, “For the Jimmy Buffett musical we may need to impose some tailgating restrictions in Cultural District garages.” He continued, “We have something for everyone. People from any background will find something for them in this lineup. Our goal is to bring Tony Award-winning shows to Pittsburgh on the first year of their tour.” Additionally, when asked, he credited the Cultural Trust staff for the beach ball idea. 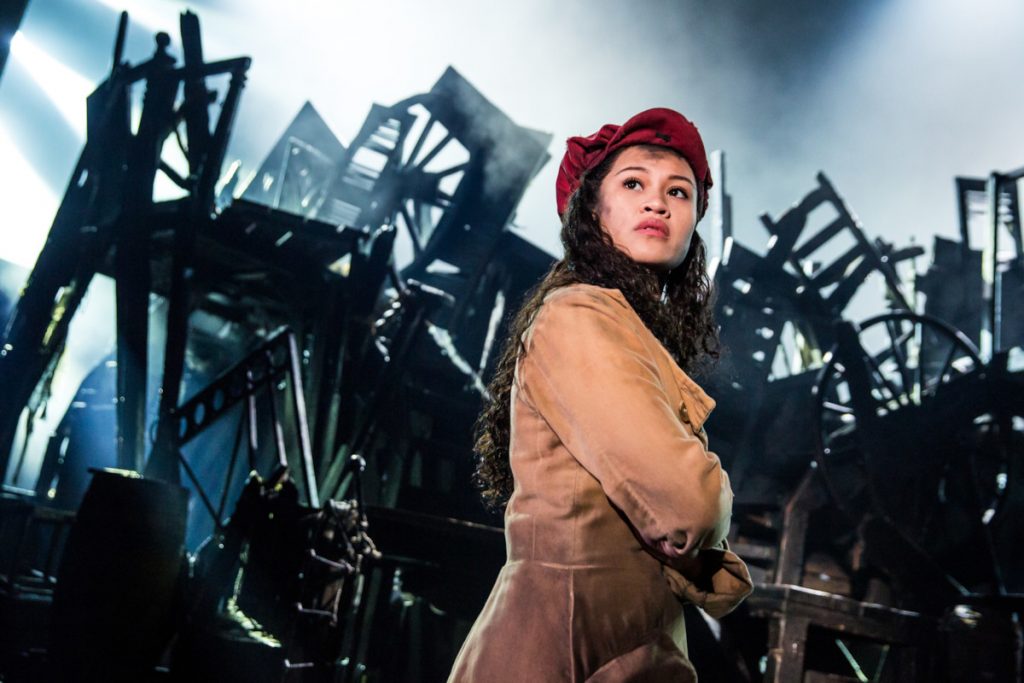 The barricades will be up once again in Pittsburgh when the popular ‘Les Miserables’ returns.

“This is one of the strongest lineups we’ve had,” Fleming said, continuing: “Pittsburgh is a fabulous theater town. Actors say they love playing Pittsburgh and that it’s one of the highlights of their tour. Hamilton loved playing Pittsburgh. They loved the city, the people, and the venue. There are also many Pittsburgh connections to these Broadway tours with some people being from Pittsburgh and others having attended college here.” He added that “Putting together the lineup is similar to putting together a jigsaw puzzle, having to fit the touring companies’ schedules into our available dates.” Well, the 2019 – 2020 season looks like one beautiful completed puzzle. For tickets and additional information visit the Cultural Trust website or call the box office at (412) 456-6666.   .