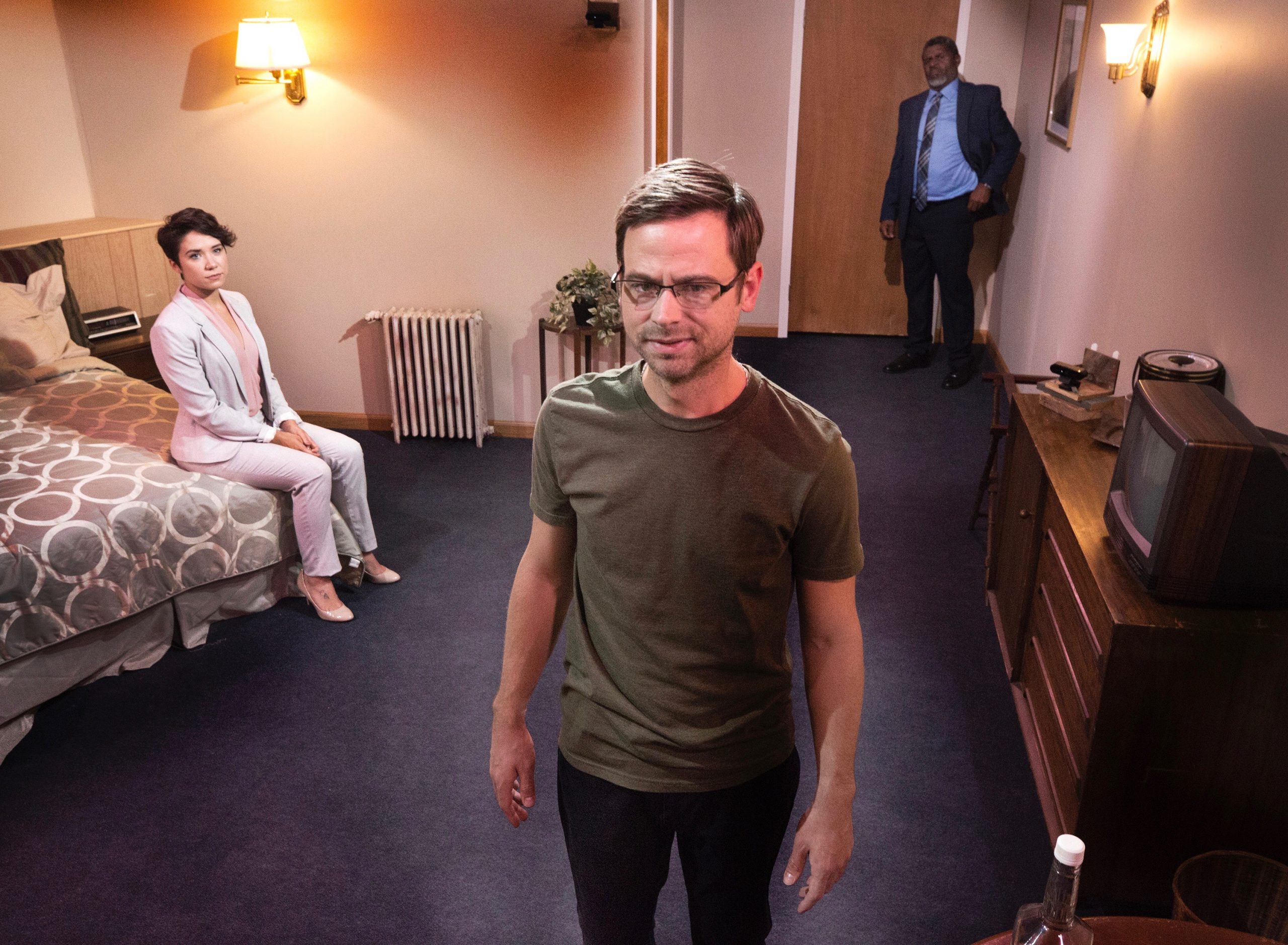 In ‘Wild,’ a fictional Snowden clone must confront his inner demons while wondering who’s got his back. Quantum streams the play in the intimate-realism style of early TV, with actors Chris Cattell (foreground), Lydia Gibson, and Wali Jamal. (photo: Heather Mull Photography)

Livestreamed theater moves beyond the Zoom format with Quantum Theatre’s production of Wild (free online October 20 to 25). Quantum is using realistic methods to stage and stream a political psycho-thriller inspired by real events. Wild, by English writer Mike Bartlett, is a fictional takeoff on the Edward Snowden case.

A young computer geek working for U.S. intelligence has turned whistleblower, leaking sensitive files that show how the government spies on its citizens. Holed up in a hotel room—similar to the one in Moscow where Snowden sought asylum in 2013—the man is visited by two mysterious strangers. They claim they mean to help him, but might instead be out to break his will and betray him.

Wild, which premiered in London in 2016, is scripted as a dark-comic cage match. It all unfolds within a stage set made up as the hotel room. The setting itself becomes part of a shocking twist at the end.  And Quantum has chosen this play to create a streamed event that doesn’t rely on the usual Covid-era practice of putting actors in separate locations, then jumping between them or Zooming them together onscreen.

The cast of three—Chris Cattell as whistleblower “Andrew,” and Lydia Gibson and Wali Jamal as the intruders—interact in real space on the set throughout. Multiple cameras follow the action. Viewers see the play in a series of continuous quick-cuts from one camera angle to another, just as you might see in a movie.

Or, to draw a closer parallel: just as people long ago saw TV theater during television’s early years.

A Device from Days of Yore

Home audiences in the 1950s enjoyed a multitude of programs such as “The Philco Television Playhouse” and “Playhouse 90,” each airing live TV dramas or “teleplays” once per week. Some were adapted from stage plays but many were TV originals. Notable originals included Paddy Chayefsky’s working-class drama Marty, Rod Serling’s Requiem for a Heavyweight (by the writer who went on to create “The Twilight Zone”), and JP Miller’s Days of Wine and Roses. Although standouts like these were later made into movies, they first won people’s hearts and minds as live teleplays … all of which were produced in essentially the same ways that Quantum is doing for Wild.

The main difference is that Wild will be broadcast through cyberspace, not over the air. It will be interesting to see if this revival of an old form catches on, given one other difference. Viewers at home today have vastly more choices than in the 1950s. Can the webcast of an acclaimed play draw eyeballs at a time when options range from the latest on Netflix or HBO to reruns of The Three Stooges?

True theater fans should hope so. A play performed live in real space/time can strike emotional chords that edited-together movies or TV series, as good as they may be, often cannot. And Wild is an unusual play, using both dramatic tension and dark humor to raise questions we all may wonder about: Who’s been monitoring us? What are their interests? Who wants to protect us, or take advantage of us—or to hide the truth so we can’t tell which end is up?

The real Edward Snowden has wrestled with such issues. Working as an IT contractor for the U.S. National Security Agency, he grew disturbed by NSA’s ability to collect data on the country’s own people. His cyber-leaks of 2013 were intended to call attention to the fact. Hopping on an airliner to escape arrest, he landed in Moscow and hoped to travel farther but judged it too risky. Snowden  remains in Russia, from where he’s become a global public figure—a hero to many, a traitor to many others.

Wild, imagining a near-identical scenario, focuses on the tenuous time at the very start of the fugitive’s exile. Followers of Snowden’s actual story may find the play departing from it radically. That’s artistic license, and audiences have felt it speaking deeper truths, ever since the days when Homer told the maybe not-so-true story of the Trojan War.

Quantum’s director for Wild is Sam Turich. The play streams on a schedule that is somewhat complex. On some nights you can watch Act 1 performed live at 8 p.m. Other nights, Act 2 goes live at 8 p.m., preceded by a videorecording of the previous night’s Act 1. Therefore you can choose between seeing the play live in two installments on successive nights, or watching the whole thing half-live at once. Visit Quantum on the web for details and viewing instructions. Either way, it’s free but popcorn is BYO.