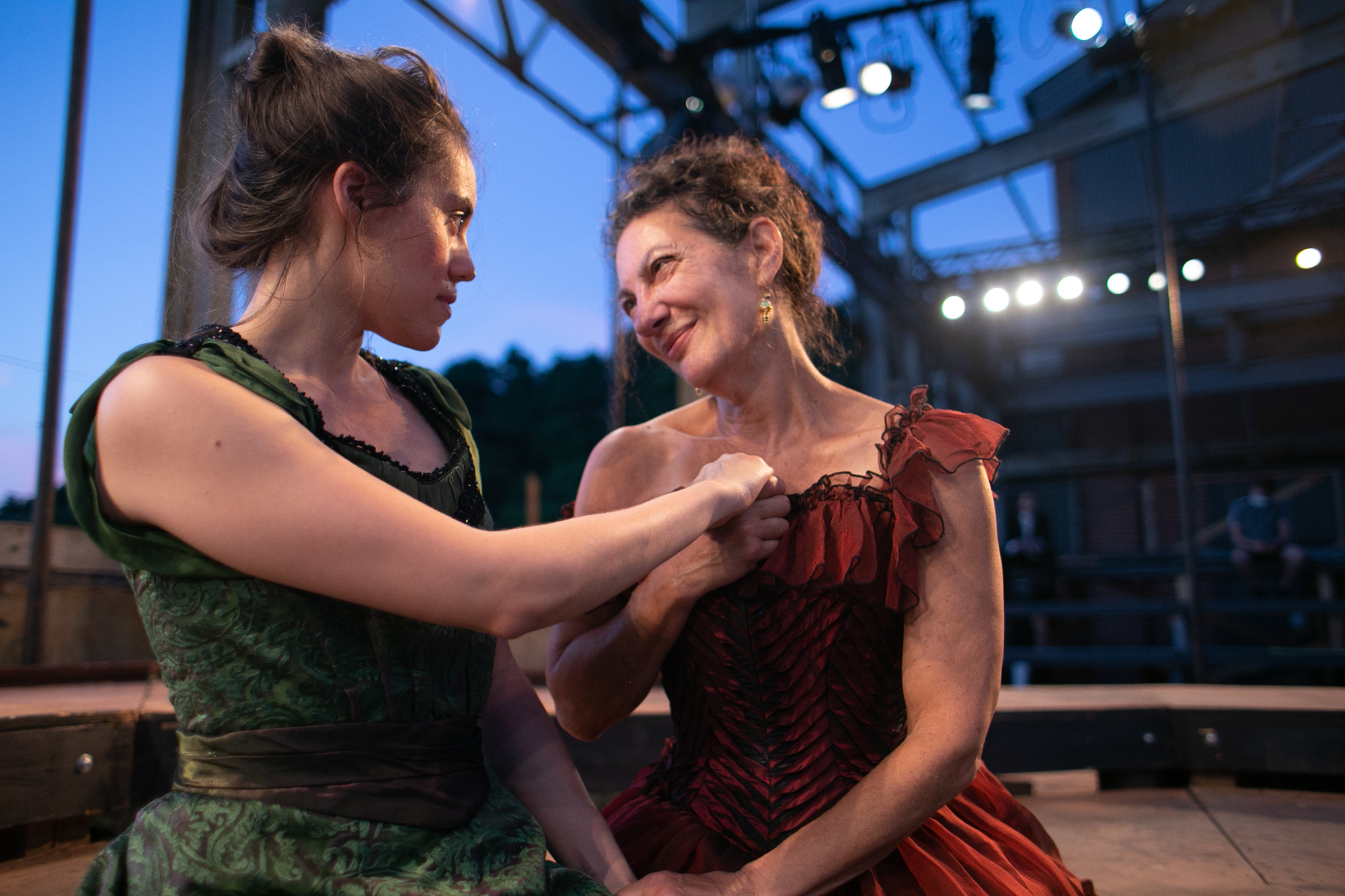 As the sun sets on a dynasty, young Anya (Julia de Avilez Rocha, L) and her aristocratic mama (Karla Boos) share a moment of reassurance. They will need it.

Strictly speaking, The Cherry Orchard isn’t about ghosts. Anton Chekhov wrote the play as a comedy, and he was quite irate when Stanislavski’s Moscow Art Theater premiered it as a tragedy, in 1904. But now, more than a century later, it would be hard to find a more chilling experience for a warm summer eve. Quantum Theatre’s production (through July 31) adds new layers of haunting to the original. And while the bizarre humor still evokes laughter, you should be there if it’s laughter in the graveyard that you’re after.

The early 1900s marked the end of an era in Tsarist Russia. The days of the landed gentry were fading fast. Newly rich businessmen were on the rise. Although the serfs had been freed from their status as human property, many lived no better than before, having merely been converted from actual slaves to wage slaves. Growing unrest, fueled by cadres of young intellectuals and activists, would lead to the chaotic Revolution of 1905—which set the stage for the later revolutions of 1917 and the formation of the USSR.

Chekhov died in July of 1904, not long after The Cherry Orchard’s premiere. He never saw the revolts that were about to sweep his country, but he was well aware of the rumblings. Thus The Cherry Orchard is set in a time of what we’d now call disruptive change.

A Leading Lady and Her Loony Circle

The play opens with an aristocratic widow returning from Paris to her country estate in Russia. Madame Lyubov Andreyevna Ranevskaya—don’t worry; the names are simplified in Quantum’s production—was called home because the estate must be sold at auction to pay her debts. Among other things, this would mean the loss of a magnificent cherry orchard, her family’s pride and joy for generations.

Luckily or perhaps not, a young man is on hand with a brilliant idea. Lopakhin, the son of a former serf and now a thriving entrepreneur, sees the real estate as an investment vehicle. All that Madame Lyubov needs to do is cut down the cherry orchard, raze the existing mansion, and build summer cottages for the nouveau riche vacation crowd. Lopakhin says the rental income will pay the debt with profits to spare.

To Lyubov (acted with depth and power by Karla Boos, Quantum’s artistic director), Lopakhin’s mad plan would obviously throw out the cherries with the bathwater. To Lopakhin (Nick Lehane), the gracious lady fails to grasp how opportunity emerges from crisis. And as the clock ticks toward auction time, the crisis is populated by a tumultuous cast of characters.

Looniest among them is Lyubov’s elderly brother, Gayev (Peter Duschenes). Gayev comes across as a Russian prototype of Monty Python’s upper-class twits. Seemingly unaware of the gravity of the situation, he introduces himself by delivering a soliloquy to a bookcase. Having learned that the heirloom is a century old, Gayev speaks, in part, as follows:

“Dear bookcase, I salute your existence! For more than 100 years, you have been faithful to the radiant ideals of truth and justice … Inspiring optimism in generations of our family, faith in a better future, and cultivating in us the ideals of goodness and social awareness …”

There’s more. A fellow aristocrat keeps trying to borrow money instead of contributing any. Lyubov’s young-adult daughters are connected to men who probably ought to propose marriage but can’t get around to it. The family tutor rails against the “intelligentsia” who talk a revolutionary game but don’t do anything, and he should know because he’s one of them. The housemaid, a young woman with highbrow pretensions, has a crush on a cad with similar pretensions while fighting off a lovesick clerk who serenades her with a guitar he calls a mandolin. And we haven’t yet mentioned the circus-trained governess or the doddering footman.

One can see why Chekhov figured that all of this should add up to an existential sitcom. But it’s spooky. 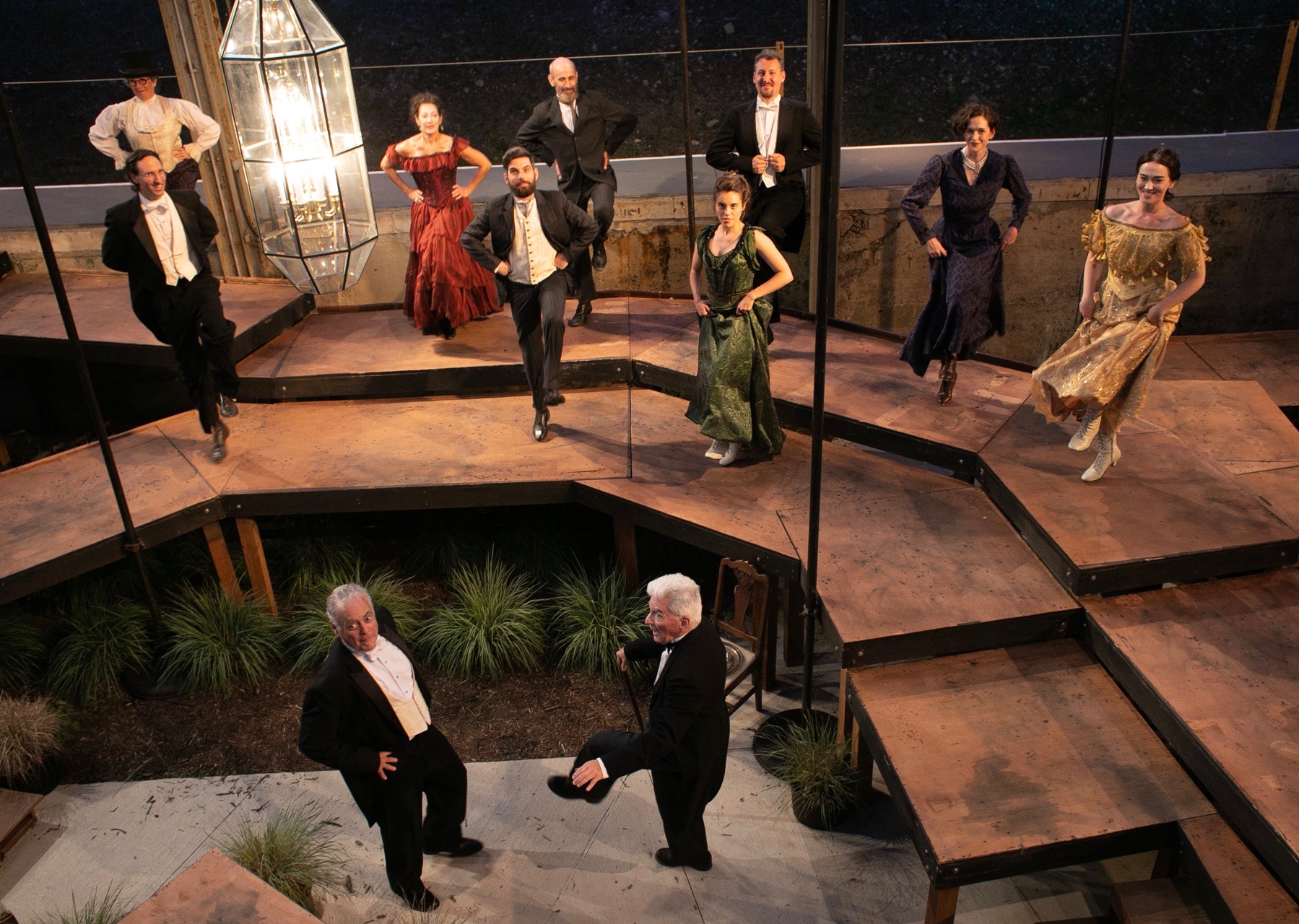 On the eve of disaster, the whole gang knows what to do: throw a dance party.

Chekhov’s gift was twofold. One, he had his characters speak or act out the inner confusions and resentments that we all feel but usually put a lid on. In The Cherry Orchard, he also did a fine job of bringing out how people’s personal demons mingle with their fears of the looming collapse of society as they’ve known it. Does that make The Cherry Orchard relevant to our current world? Maybe.

What it definitely does is make the characters more than cardboard stereotypes. And it’s haunting, because we see people haunted on multiple fronts at the same time. They are haunted by the legacy of a civilization slipping away, and also by their own imperfections. Haunted by the past, the present, and the prospects of an uncertain future.

Now consider how Quantum multiplies the chill factors. The play is staged outdoors, on the former industrial site now called Hazelwood Green. The set is built within an open steel framework, which stands next to an old railroad roundhouse that’s been renovated into a gleaming tech-economy innovation space. The ghosts of Pittsburgh past and the specter of Pittsburgh present mingle here. There’s even a live rail line on an embankment near the roundhouse, with occasional freight trains lumbering by. The engines emit mournful wails to help haunt The Cherry Orchard.

From the audience seating, one can also see an eerie low ridge stretching along the empty vista to one side of the stage-set. At times during The Cherry Orchard, various actors stroll, dance, or cavort silently upon the crest of this ridge. Silhouetted against the setting sun, they are striking figures, yet forlorn for looking so tiny, so human against the vast horizon. Anyone who’s seen the “dance of death” in Bergman’s The Seventh Seal will get flashbacks.

The flashbacks are then echoed by the actions and words on stage. This play’s dialogue is powerful in a sneaky sense. Amid the sharp repartee and the comic absurdities, many lines are spoken that are virtually guaranteed to haunt you. I’ll close with some which have lingered in this reviewer’s mind.

Madame Lyubov Andreyevna, speaking passionately of the demanding, cheating late-life lover who had dragged her to faraway Paris: “He is a stone around my neck, and I will sink to the bottom with him. But I love that stone.”

The tutor Trofimov (Joseph McGranaghan), trying to impart a history lesson to Lyubov’s daughter Anya: “Your grandfather and great-grandfather and all your ancestors owned serfs. They were in possession of living souls … Owning souls, that has changed you … You’re still living on the credit of all those centuries.”

The entrepreneur Lopakhin, in a rare reflective mood: “Sometimes when I can’t sleep, I think: Lord, you gave us vast forests, immense fields, the deepest horizons. And by rights, we who live here should be giants.”

And the acrobatic, stunt-performing governess, Charlotta (Laurie Klatscher): “These culturally developed people are so stupid. I can’t talk to them. I’m always alone. Who I am, why I am—unknown.” 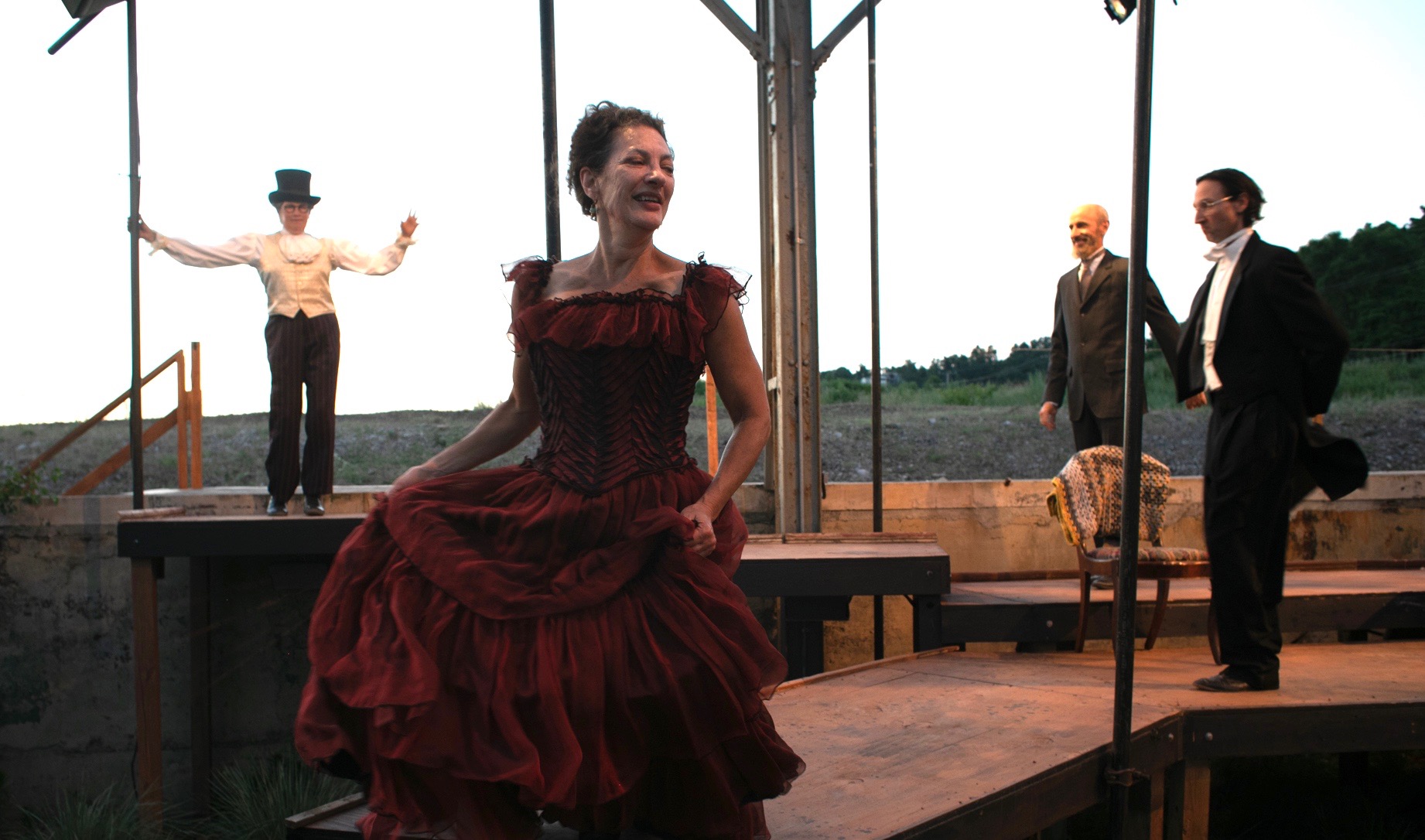 Together, yet alone. Madame faces an uncertain journey while Charlotta (L) waves from distant solitude, and Gayev and Trofimov exercise their greatest skill, just watching the days go by.

Chekhov’s The Cherry Orchard is presented by Quantum Theatre in a new adaptation and translation by the American theater artist Libby Appel. The director is Katie Brook. Actors not named previously, all of whom play their parts excellently, are: Julia de Avilez Rocha as daughter Anya. Moira Quigley as daughter Varya. Zanny Laird as the zany housemaid Dunyasha. Benjamin Viertel as the boorish social climber Yasha. Jake Emmerling as the hapless serenader Yepikhodov. John Shepard as the borrowing neighbor Pischik. And Gregory Lehane as the ancient footman Firs, who delivers the play’s haunting final lines.