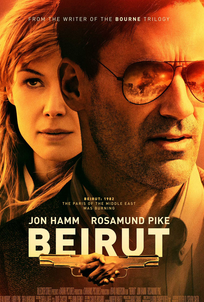 Beirut, Lebanon is one of the world’s oldest cities and was often referred to as the “Paris of the East” due to its French influences and vibrant culture and arts. Much like California cities, one could visit the beach and ski in the mountains all in one day. Unfortunately it all came apart with the buildup to, and advent of, the Lebanese Civil War in 1975. Many Lebanese fled the conflict. Pittsburgh has a vibrant Lebanese Christian community in the South Hills.

The city of Beirut is the historical backdrop for the dramatic film of the same name. The movie opens in the early 1970s with Mason Skiles (Jon Hamm) living with his wife Nadia (Leïla Bekhti) in Beirut. Skiles is the deputy chief of mission at the American Embassy. Skiles and Nadia are very much in love, they have a beautiful house, and he is enjoying his placement there very much.

Skiles describes Beirut as like a “boarding house” where Christians, Jews, and Muslims all live together with no boarding house manager keeping things in order. He goes on to say that now Palestinian refugees (and the PLO) are knocking at the door. They were asked to leave Jordan after fomenting trouble there. Some groups want to let them in, some don’t. Skiles believes it is best to keep all sides talking and working together. He and Nadia have even taken a young Palestinian boy under their wing.

A rising star in the State Department, Skiles even counts Henry Kissinger as an admirer. There is so much promise for the Skiles and even the young Palestinian boy. That is until things go horribly wrong and their dreams deflate. 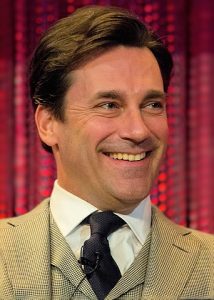 The film then cuts to Skiles getting dressed in a motel room in 1982. An American drive-time host on the motel room’s radio signals that he is back in the States. He pours himself a drink before heading out to his job as a traveling labor dispute negotiator. The talks he is working on soon break down and he heads to the local bar to have some drinks. As he’s sitting at the bar smoking and drinking, a man comes in and offers him $6,000 to give a talk in Beirut. He tells the man that he “wouldn’t go back to Beirut if it was the last place on Earth.” Plus he says :I don’t have a passport.” The man replies that there is also a passport and airline ticket in the envelope for him. After some thinking, Skiles decides to go.

Once back in Beirut again Skiles is saddened to see all the destruction to the beautiful city. Many buildings are in ruins from shelling by various, factions, militias, and armies against one another.. There’s even a tank on the beach patrolling behind a stretch of colorful beach umbrellas.

Skiles checks into his hotel room and picks up a small “table tent” notice that states that if there is an attack on the hotel please stay in your room and do not leave to take pictures. He then turns and looks out the hotel room window at the battle-scared city around him. The film cuts to an exterior shot of him looking out the window. The camera then pulls back slightly to reveal that the exterior wall of the hotel is pockmarked by bullet holes and holes made by much larger projectiles. Several of the hotel’s windows are boarded up with plywood sheets.

in Beirut Skiles guide is Sandy Crowder (Rosamund Pike). He soon meets with his welcoming committee of diplomats and quickly figures out that something isn’t smelling right. The talk he is to give was a ruse to get him there. He demands to know why he’s back in Beirut. They tell him that an important American has been snatched off the street and the head of the terrorist group that holds him has said he only will negotiate with Skiles.

He initially balks at the mission until they tell him the hostage is his former colleague, Cal (Mark Pellegrino) from his days at the Beirut Embassy. Crowder, who is a CIA agent, and the group view Skiles role for them as a functioning alcoholic figurehead. After awhile and in between drinking and playing cards for money in the hotel lounge, he figures out that the diplomats are losing interest in trading hostages for Cal. He quits drinking and convinces Crowder to go rogue with him as they try to rescue their associate. They zip through the streets of Beirut to execute their plan. And there’s nothing like blowing through a Green Line checkpoint to get the heart racing.

Hamm does an excellent job in the role of Skiles. Although Skiles is damaged goods, he preserves his humanity and wits. His fantastic negotiating skills come in handy in the various situations he encounters. As Crowder, Pike portrays a strong, confident woman who wants to do the right thing. Her voice and look is somewhat evocative of a younger Candace Bergen. Shea Whigham is in a supporting role as “gun boat” diplomat Gary Ruzak. Dean Norris plays Donald Gaines, part of the diplomat group which also includes Larry Pine as Frank Shalen. Shalen has a great line where he tells Ruzak, who is questioning Skiles value to the mission, “Don’t play cards with him Gary.”  Idir Chender delivers a fine performance as the volatile terrorist, Karim Abou Rajal. Beirut was written by Tony Gilroy who also wrote the screenplays for the Bourne trilogy movies. Brad Anderson directs.

There was a little bit of controversy as the film was shot in Tangier, Morocco and didn’t use any Lebanese actors. It has also been said that although Beirut has done a very good job of rebuilding itself and resolving its difficulties, the cost of securing insurance to film there is high. While Beirut may not have been the actual location of the movie, Beirut is a fact-paced, smart film that delivers the goods.