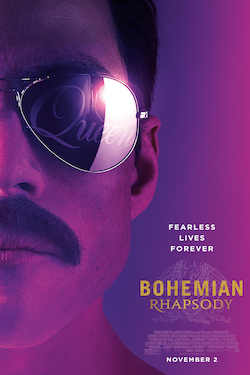 The new docu-drama film Bohemian Rhapsody is a fascinating look at the life and career of Freddie Mercury, lead singer of the rock band Queen. The movie begins and ends with one of the biggest events in Mercury’s life, Queen performing at the Live Aid Concert in 1985. After opening with Mercury driving to Live Aid and ready to take the stage, it rewinds to start at his humble beginnings as a songwriting baggage handler at Heathrow Airport. In addition to songwriting he is an artist and fashion enthusiast.

Mercury’s family is of Parsi descent, a lineage of Persian people who mainly fled to India after the Arab invasion of Persia during 636–651 AD. Mercury (née Farrokh Bulsara) and his family lived in Zanzibar and then India when Mercury was growing up, eventually moving to England. It was a loving family with a stern father as its head. Stressing  “good thoughts, good words, good deeds” as part of their Zoroastrianism religious faith. Mercury and his father Bomi Bulsara (Ace Bhatti) were at odds over Mercury’s youthful exuberance and undistinguished early career. Bhatti did a wonderful job in portraying the father’s words and looks of disapproval. Luckily Mercury had a loving and supportive mother and sister, Jer (Meneka Das) and Kashmira (Priya Blackburn).

The Making of Queen

Mercury had to overcome many things growing up, people calling him “paki,” short for Pakistani. Another was his big overbite. When he was pitching himself as the new lead singer of the band Smile to band members Brian May (Gwilym Lee) and Roger Taylor (Ben Hardy), Taylor thought he wouldn’t be good because of his big set of teeth. As Mercury was walking away he showed them his vocal range and they quickly called him back and invited him to join their band which would become Queen. Mercury explains to them he has four extra incisor teeth which gives his mouth better vocal qualities. He was widely known as one of the best and most versatile singers in rock and roll.

Mercury is played brilliantly in Bohemian Rhapsody by Rami Malek. He probably had a long  adjustment period in preparing for the role with the prosthetic teeth. Reportedly, the exact sized replica of Mercury’s teeth were too big for Malek’s face so a slightly smaller set were made. Malek was very adept at portraying both Mercury’s bravado and vulnerability.

I discovered many new things about Mercury in Bohemian Rhapsody. One is that he was in love with a woman, Mary Austin (Lucy Boynton), for many years and they were even engaged at one point. However, the inconvenient truth that he had more of a sexual interest in men redefined his relationship with Austin to that of a long-term friendship. He even bought her a house right next to his. Mercury also wrote the Queen song “Love of My Life” for Austin. Boyton does a wonderful job in scenes with Malek of showcasing Mercury’s tender and loving side. The film also shows glimpses into some of Mercury’s homosexual dalliances including with his duplicitous manager Paul Prenter (Allen Leech) and them kissing and cruising a gay bar. 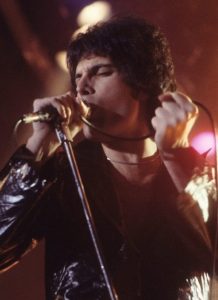 Bohemian Rhapsody also tracks Mercury’s relationships with his bandmates, sometimes joyful, sometimes tense and angry. Angst can be good for creativity. This is evidenced in the film when Mercury is arguing with May and Taylor, bassist John Deacon (Joseph Mazzello) starts fooling with a new bass line that is so good it breaks up the arguments and becomes the foundation for another hit song, “Another One Bites the Dust.” Bohemian Rhapsody shows Queen at times as a very tight unit where they all stick together against record company executives while experimenting with music and life, and at other times as a quarrelsome lot. Lee, Hardy, and Mazzello’s portrayal of the band members is seamless and drives that part of the story. It’s fun to see how different Queen songs came together. Actor Mike Meyers even has a role in the film, although he can be hard to spot.

Another fascinating aspect of Bohemian Rhapsody is to see Mercury’s downward slide through sex, drugs, and rock and roll. Austin confronts him at one point in the film and tells him he has to slow down, that he can’t keep burning the candle at both ends. He replies “It makes a glorious light.”

The climax of the film is Mercury and Queen barely getting on the bill at Live Aid at Wimbley Stadium in London, England, and when they do, rocking the house. The movie bravely tries to recreate the look and feel of several of Queen’s songs done at the benefit concert. Malek and his fellow actor/bandmates look like authentic members of Queen on these scenes. Although some of the shots of the whole of Wimbley Stadium and the crowd from the stage perspective seem a little off somehow and could have been possibly been done a little smoother. It may have been that they used original footage of the Live Aid crowd and juxtaposed it with the newer movie scenes. A few of the tighter crowd shots seemed a little too staged. One shot that worked well in the concert scenes were two workers or fans sitting up in the lighting standards and thoroughly enjoying Queen’s set. That said the director should get praise for taking the risk in trying to recreate the atmosphere of that event. Before their set at Live Aid, Mercury told his bandmates that he had AIDS. Mercury died from the disease in 1991. After Mercury’s death, Brian May, Roger Taylor, and Queen’s manager Jim Beach set up The Mercury Phoenix Trust to fund HIV/AIDS initiatives globally.

The film has been years in the making with changing actors, directors, and writers. Queen band members May and Taylor served as creative and musical consultants on Bohemian Rhapsody. At one point Sacha Baron Cohen was all set to play Mercury, but departed amicably after creative differences with the producers. Director Bryan Singer, according to media reports, was let go for absences and for clashing with the cast and crew. Dexter Fletcher was then brought in as director to finish the film.

The film takes one on an emotional journey through the search for love, fame, great rock and roll songs, and redemption. Bohemian Rhapsody should satisfy people both new to Mercury and the music of Queen as well as longtime fans. There has been a little controversy about some of the factual aspects of the film and how some things are portrayed, but it is a very entertaining two and a half hours.