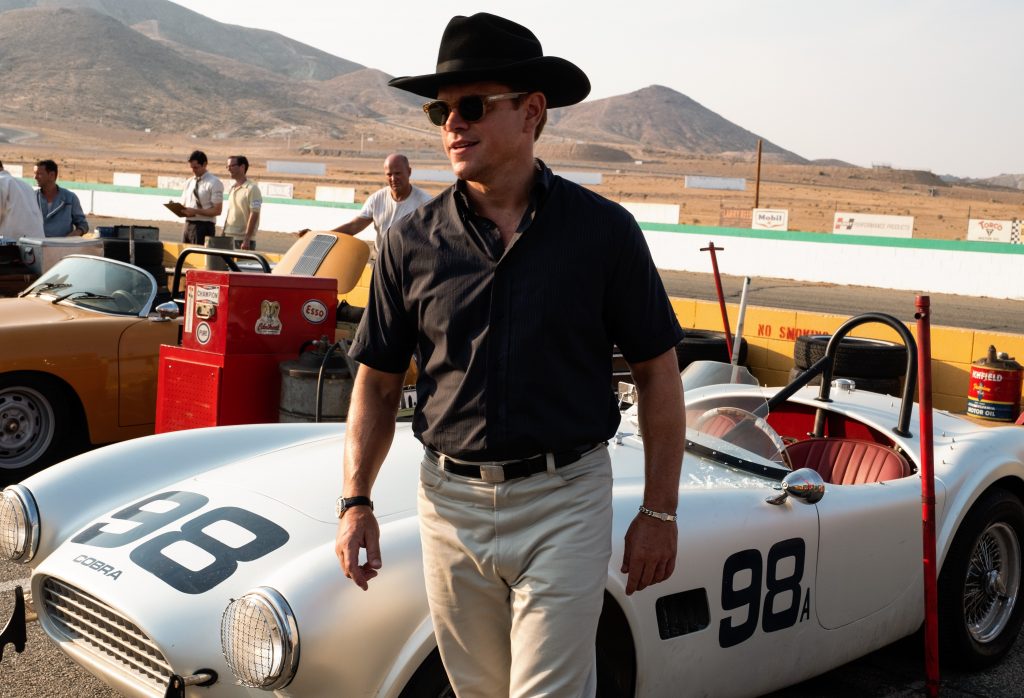 Matt Damon as racing legend and race car designer Carroll Shelby with his Cobra before a race at Willow Springs in California.

“There’s a point at 7,000 RPMs where everything fades. The machine becomes weightless. It disappears. All that’s left, a body moving through space, and time.

Glory in racing, and other professions, can be fleeting. Soon after winning at Les Mans, Shelby was discovered to have a heart condition during a routine physical. He was instructed to quit racing and to take medication. He did stop racing and concentrated all his efforts into building race cars and having others race them. This was the basis of his company, Shelby American, which started manufacturing the AC Cobra and later the Shelby Ford Mustang.

One of Shelby’s drivers was the highly talented driver and mechanic/engineer, Ken Miles (Christian Bale). The Englishman was also known for his short temper and direct approach. The main plot track of the film shows Shelby and Bales friendship and respect for one another steadily growing, even while outside pressures were trying to move them apart. Along the way though, the two of them had some very “wrenching” moments.

Another track in Ford v Ferrari was the business battle between Henry Ford II (Tracy Letts) and Ferrari’s owner Enzo Ferrari (Remo Girone). Lee Iacocca (Jon Bernthal), one of “the suits” surrounding Ford II, tells Ford that the company’s sales were flattening because the brand needed more excitement, excitement that could be provided by having a winning racing team and hotter cars.

Ford II tries to buy Ferrari, and it seemed promising at first, but then some disagreements over racing decision making blew the deal apart. Enzo Ferrari departed the negotiations with a few choice insults towards Ford II that Iacocca relays to him. Ford II then declares war on Ferrari. That lights the fuse for the rest of the movie and the plot lines merge into one—beat Ferraris with Fords at the 24 Hours of Les Mans in 1965. This would be no easy task as Ferraris had won at Les Mans from 1960 to 1964.

Iacocca then visited Shelby at his headquarters at an airport in Los Angeles, California, to see what it takes to win the 24 Hours of Les Mans. Shelby tells him it won’t be easy and informs Iacocca of the necessary ingredients.

Shelby gets the go ahead and seeks out Miles who has his own small neighborhood garage which is having major financial problems. Maybe the garage is not doing well because he wants to gear up every car that he works on into high performance mode. He is reluctant at first to listen to anything Shelby has to say due to some prior difficulties between them. He eventually does, and thinks Shelby is crazy for trying to take on Ferrari at Les Mans without years of racing car development. Miles does warm to the challenge, he doesn’t have a lot of other options and the pay is very good. Although Miles has been down on his luck financially, he has the support of his loving and supportive wife Mollie (Caitriona Balfe) and adoring son Peter (Noah Jupe). 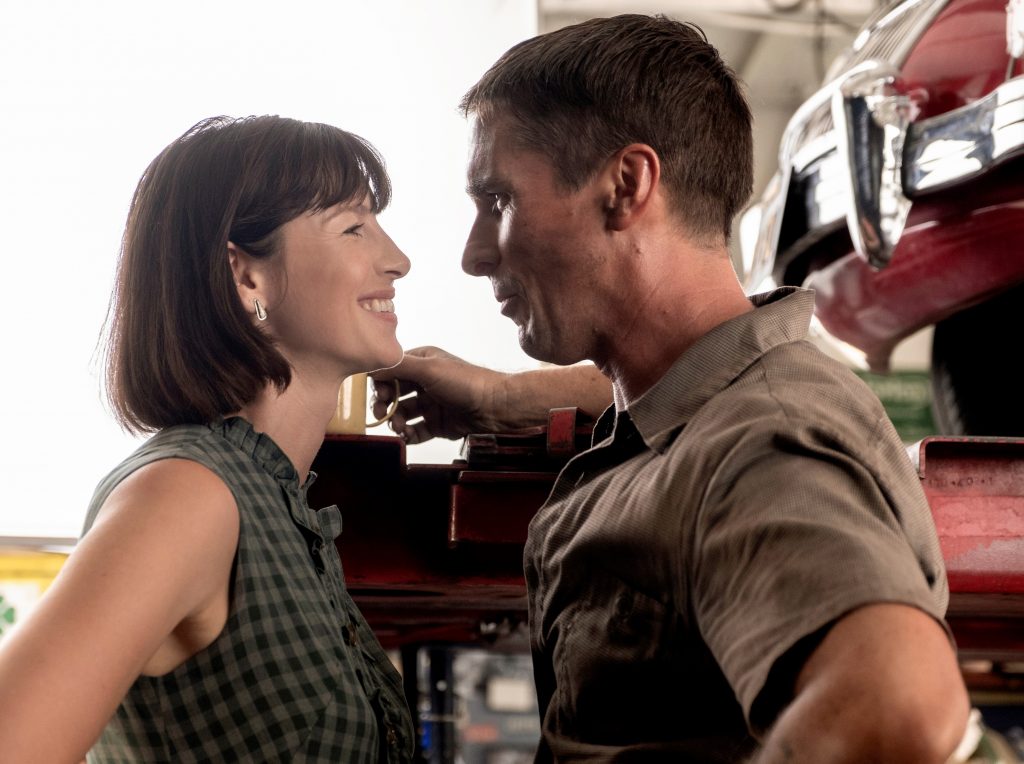 Director James Mangold said in an interview in the movie trailer, “I think the movie’s about more than car racing. It’s a movie about brotherhood and the things we accomplish in collaboration with others.” That’s certainly evident in the film’s two renegades. One a smooth talking Texan wonderfully played by Damon, and the other a fiery English driver who plays to win. Bale is a strong counterweight to Damon’s Shelby, their characters joining forces to achieve their dreams, albeit in a tough corporate environment.

The pair work hard to develop a new racing prototype the Ford GT40 for the road racing circuit in 1965. Also instrumental in that process was race car engineer Phil Remington (Ray McKinnon).With Miles driving, Ford won the 12 Hours of Sebring and the 24 Hours of Daytona. The next race is at Les Mans. The Ford corporate racing team, lead by the devious Leo Beebee (Josh Lucas), tells Shelby that Miles isn’t going to drive that race, because they don’t think he is the best personification of a Ford race driver. Although severely disappointed, Miles doesn’t quit. He hangs in there and supports the team from back in the U.S. and patiently awaits his next opportunity.

Shelby American and Ford engineers get feedback on the latest test run of the GT40 from Miles.

The Ford team doesn’t beat Ferrari and Shelby convinces Ford in a rather dramatic manner that Miles is the driver that has the best chance of beating Ferrari. Miles will then be the next Ford driver at Les Mans. That story line teaches a lesson that sometimes it’s not best to get upset and quit, that sometimes it’s better to stay and help the team while awaiting your next opportunity.

Shelby and Miles at Les Mans

The climax of the story is with Shelby and Miles competing in the 24 Hours of Les Mans. Both Miles and Denny Hulme (Ben Collins) shared the driving duties at Les Mans with Miles pushing the team forward with record setting laps while trying to catch the Ferraris. They were also helped along by good old American ingenuity and “borrowed” Ferrari stopwatches. 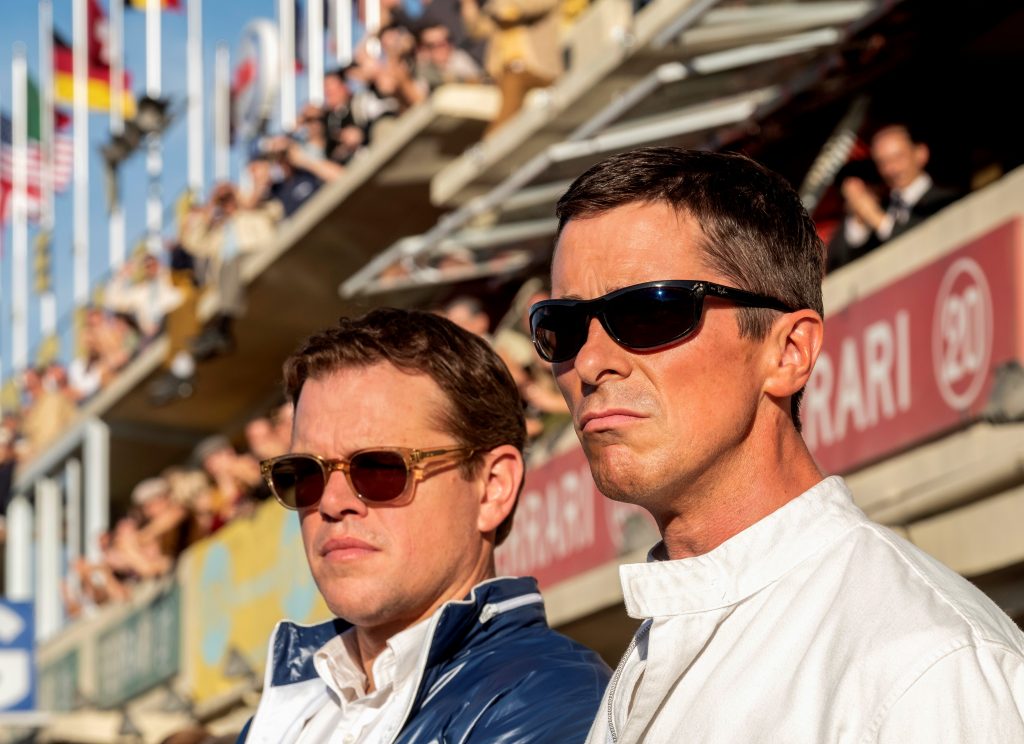 Shelby and Miles have reached the 24 Hours of Les Mans race. Will they beat Ferrari and bring home a victory for Ford?

The racing scenes are phenomenal. Included were the quick moving standard beauty shots of the clutch being pushed in, the gear shift moving into the next gear, and the gas pedal being depressed. Innovative scenes showcased the on track competition between a Ferrari race car driver and Miles. In several of those scenes the camera shots showed close ups of their faces looking over at one another while they were racing side-by-side. There were also racing shots that made you feel like you were in the car on the track. The technical camerawork and editing for this film are all-pro, as was the stunt work.

On the Mulsanne Straight on the old Les Mans course as depicted in the film, cars could reach 230 miles an hour before breaking hard into a right turn into the village. So braking, in addition to speed was an essential element of race cars in the 24 Hours of Les Mans. In a very innovative shot of Miles braking the car in the hard right turn at night, the wheel rotors on the passenger side of the car were seen burning red hot, like a piece of molten steel that had just been poured.

As a racing aficionado who’s taking laps at Texas Motor Speedway in a NASCAR race car with a NASCAR driver going over 160 mph and also being in the pits at the Pepsi 500 at Daytona International Speedway, I highly recommend Ford v Ferrari as an authentic racing movie. It’s also a film that provides interesting looks at relationships between friends, spouses, family members, renegades, and corporate executives. The movie is also being shown in IMAX format and that is how I viewed it.

Director Mangold gives equal attention to the fast-paced racing scenes and the touching moments between characters. Writers Jez Butterworth, John-Henry Butterworth, and Jason Keller delivered a tight script that covers a lot of ground. Cinematography is by Phedon Papamichael. Ford v Ferrari is rated PG-13 and is distributed by 20th Century Fox.