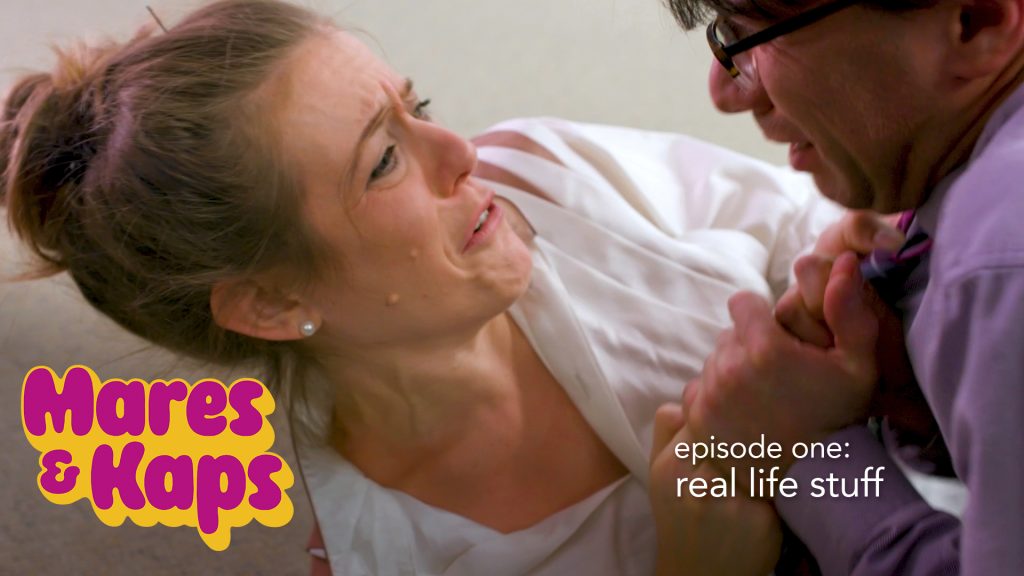 Mares (Marianne Bayard) desperately tries to convince her “besty,” Kaps (Jonathan Kaplan), to move with her from Boresville to Glitzburgh so she can pursue her acting career in the “Mares & Kaps” pilot episode.

The last that we saw the comedy team of Mares & Kaps, Marianne Bayard and Jonathan Kaplan, was at their comedy show in January at Carnegie Stage. There they delivered many laughs with funny comedy skits and Bayard giving a hilarious over-the-top impersonation of Celine Dion. At the show they also played episodes of their Amazon Prime web series “Killing It!.” It was announced then, that the first episode of their new web series, “Mares & Kaps” would be finished in the coming months. The pilot was released recently on Mares & Kaps YouTube page. The series is set to be an eight episode story following the same characters from “Killing it!.”

The pilot episode sees Mares working as a funeral home representative who can’t stop talking about theater to the wife of a couple who has come in to make arrangements for their late son who was an actor. After trying to make funeral plans for their son and Mares just wanting to talk about the stage, the father has grown angry and takes his wife to leave. Mares keeps trying to talk about theater, but now seeing she has lost their business, tries to keep them, offering several discounts in a rapid-fire manner. She even runs out after them when they drive away. Mares then informs her boss she is leaving to pursue an acting career.

Now, all she has to do is to convince her best friend Kaps to quit his office job and join her on an “adventure of a lifetime” from their town of Boresville to Glitzburgh (the alternative Hollywood in their fictional universe). Mares will not take no for an answer and uses just about every method available to convince him to quit and join her. It’s a funny scene. Kaps finally relents and agrees to go with her. They each then do a power kick move in unison.

As they embark on the journey, there’s a fun graphic that shows them in a car moving across a map (which looks like the northern part of South America or Australia). Looking closely, it can be seen that towns around Boresville have dark names like Failuretown, Lame Island, Fracktown, Suckfield, and Gloomington; while towns near Glitzburgh sport glorious names such as Zenith, Chillingham, Partystadt, Shangri-La, and Kickasstopol. The pilot ends with them them taking the Glitzburgh exit, arriving in Glitzburgh (Pittsburgh), and doing their high kicks on a downtown street.

The pilot for “Mares & Kaps” is extremely funny. Bayard in many of her roles, excels in her comedic goofiness, going from self-doubt to extreme overconfidence with a zero-to-sixty quickness. She is a very skilled physical comedian who can exaggerate her facial expressions and body movements in a very zany manner. In many ways she is reminiscent of a more animated version of Lucille Ball.

Kaplan is a brilliant straight man for Bayard. His character is often the voice of reason and not willing to take many chances. Kaplan breaks free from that main role and shines in several of his own spotlight comedy moments. Both of their characters are partially derivative of their personalities. The duo make a very good team.

The “Mares & Kaps” pilot is a well-polished, professional production with a strong supporting cast and behind the scenes professionals. Steve Parys is the director and veteran producer Carrie Collins is also on board. Production began in November 2019 and shooting was completed just as the pandemic was starting to rise up in February. Collins and Parys were the team that produced and directed Patrick Cannon’s original pilot Mulligan.

Bayard describes “Mares & Kaps” as a dark comedy satirizing the pursuit of fame and highlighting the importance of friendship. She went onto say, “Our show is tongue in cheek. Mares puts everything on the line to achieve stardom, including her values, her friendship, even her own life. We’re making a comment on selfish pursuit, unchecked ego, and a culture that rewards those qualities. We want to collaborate with local financiers and film enthusiasts who want to support this Pittsburgh based story. This city is filled with talented people. We want to put them to work. We want to make something great. We just need a few hundred g’s [thousand] first” The pilot can be viewed below and on the Mares & Kaps YouTube page.

Bayard, is an actor, writer, producer, and comedian who is also a member of AFTRA and the Screen Actors Guild. Her performance education not only included a degree from Emerson College, but also the clown training school, Ecole Phillipe Gaulier of Paris, France. Bayard has developed solo diva parody shows such as Spending Time with Celine and Cher: A Love Story, and has had supporting roles in films Knives Out, Joy, The Possession of Hanna Grace, and the TV series “Mindhunter.” She also writes and produces her own comedy on YouTube and Instagram at Mares and Friends.

Kaplan, based in Lindenhurst, New York is a stand-up comedian who created the Instagram web series “Grading Animals with JKAPS,” founded and produces the comedy podcast “Low End Gigolos,” and has toured the Canadian Fringe Festival Circuit with Found in New York Productions. Kaplan has been in the cast of several award-winning original plays.

Bayard and Kaplan met in the New York City comedy scene in 2010, but didn’t start working together right away. When they did in 2014, Bayard soon thereafter moved to Pittsburgh to pursue her acting career here because of the city’s burgeoning film industry. They collaborate through electronic means and creative retreats. They are both very good friends, and although they have some vigorous discussions over content and methods, their friendship remains strong. Look for more episodes of “Mares & Kaps” after they secure additional financing.