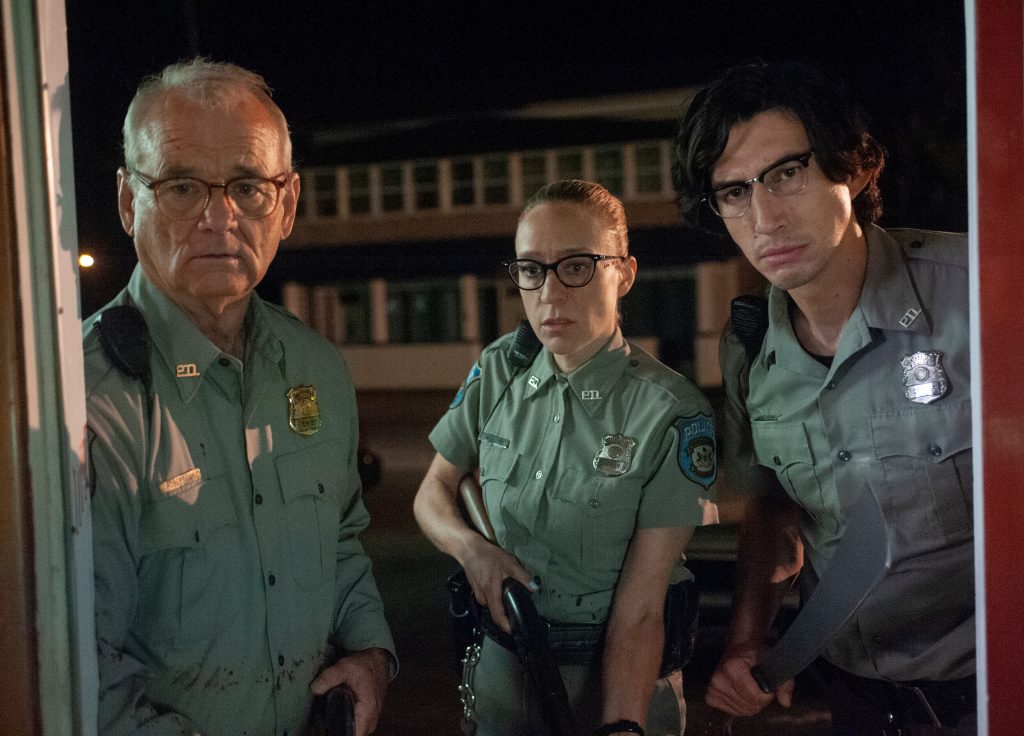 In the summer sea of sequels and superhero flicks, a zombie movie with a stellar cast stood out. The Dead Don’t Die is more of a zombie spoof with a social conscious rather than an outright horror movie. The film is based in the small town of Centerville, with a population of 738.

As the film progresses, tidbits of info are revealed as to where Centerville might be located. One of the first is the mention of Latrobe. Another one that perks up Western Pennsylvania ears is East Brady. A Pennsylvania license plate is revealed. There’s even a simple map on the news that shows West Brady and Frizzleburg (There is no West Brady, but there is a Frizzleburg in Pennsylvania). The movie however was shot in New York state.

Most of the plot is focused on Centerville’s Police Chief, Cliff Robertson (Bill Murray), and officers Ronnie Peterson (Adam Driver), and Mindy Morrisson (Chloë Sevigny). The movie starts with Robertson and Peterson checking on the cantankerous Hermit Bob (Tom Waits), who has a primitive camp in the woods next to the cemetery. Farmer Frank Miller (Steve Buscemi) had called in a report that one of his chickens was missing and that he thought Hermit Bob had taken it.

Driving back from their check-in on Hermit Bob they wonder why the sun hasn’t set yet. It is after 8 p.m. and the sun normally has set by then at that time of year. Peterson’s watch and cellphone have both stopped working. The police dispatch radio is cutting in and out, before finally going dead. They turn on the regular car radio and find some music on a commercial radio station. Playing is “The Dead Don’t Die” by Sturgill Simpson. Robertson says to Peterson, “That song sounds so familiar. Why does it sound so familiar to me?” Peterson answers, “It’s our theme song.” The song had played during the movie’s opening sequence. With that folks, the fourth wall is broken and we’re off to the races. After all, this quirky film is written and directed by Akron, Ohio, native Jim Jarmusch. An independent producer/director/writer and actor whose projects include the film Dead Man, starring Johnny Depp, and video shorts for Tom Waits, Neil Young, and The Raconteurs.

Another instance where the fourth wall is broken is when Peterson mentions several times throughout the beginning of the movie, “This isn’t going to end well.” Finally Chief Robertson asks, “Why do you keep saying that?.” Peterson answers, “I’ve read the script.” This slightly angers Murray, who says, “They only gave me a script with my parts in it. They gave you the whole script. I even did a favor for that guy.”

We see a TV news broadcast anchored by Posie Juarez (Rosie Perez) where they are reporting that scientists have said that the days are now longer because the earth has shifted off of its access due to polar fracking. This is followed by the U.S. Secretary of Energy who’s saying that Polar fracking did not cause the Earth to come off its axis and that polar fracking creates jobs and protects American freedom. There’s also a purplish green eerie glow fluctuating around the moon, that’s not really explained, but is a good spooky effect.

Murray, who has a exemplary track record in supernatural affairs, think of his fun ghost hunting performance in Ghostbusters, portrays Chief Robertson almost as if he’s a zombie too. But hey, he’s performing the role as written and directed in a very deadpan way. Driver plays his Peterson in much the same unanimated manner. While Sevigny’s emotional character, Morrison, is skittish and emotional.

The zombies when they come back to life follow the same somewhat materialistic interests they had before they died. Teen-aged zombies walk around looking at their phone, druggy zombies try and break into the drug store as they slowly chant “Oxy, oxy.” Men zombies break into the hardware store. There’s even a woman zombie, in a tennis outfit practicing her swing. See if you can spot Iggy Pop and Sturgill Simpson as zombies. And Carol Kane plays a zombie who just wants another glass of chardonnay.

Unfortunately/fortunately, the kids at the local juvenile detention center know what to do in case of a zombie attack. It’s the same thing that they have been trained to do during an active shooter event. Wedge a doorstop under the door and hide in the closet. 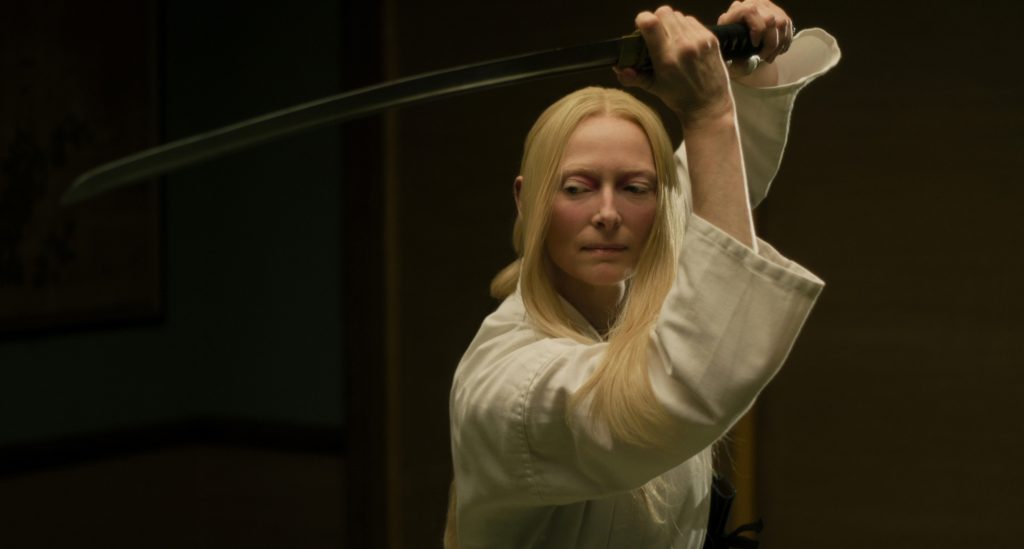 There are a few characters who really stood out in this zomedy, first and foremost was Tilda Swinton. She played funeral home owner Zelda Winston to a tee. Winston has a thick Scottish brogue and practiced her Samurai sword fighting moves in front of a large Buddah statue in the funeral home. She uses those skills to perfection in combating the zombie apocalypse. She fights, walks, and talks with fine comic precision. Any sequel to the The Dead Don’t Die  must bring her back.

Buscemi is funny as the angry white guy farmer. Danny Glover plays the hardware store owner in a deadpan way. The comic book/memorabilia/ gas station store is owned by Bobby Wiggins (Caleb Landry Jones) and has a fun scene with WU-PS delivery driver Dean (RZA from Wu-Tang Clan). Hermit Bob (Waits) is a lively character who knows something bad is coming by observing and respecting the natural world. Even Selena Gomez is in this movie as Zoe, one of three hipsters travelling together in a classic Pontiac LeMans. She turns in a very memorable performance.

Once you realize that the movie is going to be more of an offbeat comedy than a true horror movie, you kind of settle in and go for the ride. There are a few scenes that could be possibly shortened, but maybe they were held long for dramatic/comedic effect. One scene that is oddly enjoyable was a long held shot from the middle of the back seat of the police car with Chief Robertson driving and Peterson in the passenger seat as they rode through the town. It was really a different shot. At the end of The Dead Don’t Die, Chief Robertson and Peterson do finally get some more emotion. The Dead Don’t Die provides some good humor and insights and there’s enough gore to keep zombie traditionalists interested.