1) Alvvays won over the crowd’s hearts and feet at the Dollar Bank Three Rivers Arts Festival in 2015. They return to Pittsburgh, this time at Mr. Smalls Theatre. The Toronto quintet now have more than their 2014 nine-track, eponymous debut under their belt. Even better, the new songs are filled with as much indie-pop jingle jangle as earlier hits, such as “Adult Diversion” and “Archie, Marry Me.” The combination of past standouts and fresh tracks should make for a solid set list. One new song is “Lollipop (Ode to Jim)” from their sophomore album, 2017’s Antisocialites. The song pairs frontwoman Molly Rankin’s sugary vocals with guitars that alternate between surf- and noise-rock. The Jim in question is Jim Reid, frontman of The Jesus and Mary Chain, a Scottish band whose fuzzy guitar sound rightly deserves an ode from not only Alvvays but also many other an underground band. Frankie Rose opens.Sold out. 8 p.m. 400 Lincoln Ave., Millvale. (CM) 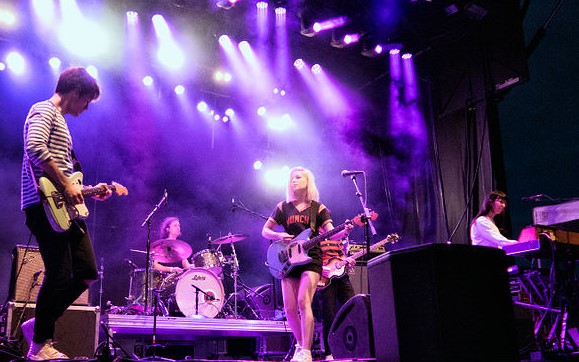 Alvvays performing at the Sasquatch! Music Festival in 2015 in George, Washington. Photo: David Lee and Wikipedia.

2) Reb Beach, lead guitar player for rock bands Winger and Whitesnake, is back in his hometown of Pittsburgh tonight for a show at Jergel’s Rhythm Grille. This is the opening night for Jergel’s Tuesday Bike Nights. Also playing are Scott Bender of Baton Rouge, Jon Belan (Gene the Werewolf), and Dave Throckmorton. In addition to his supporting roles in rock groups, Beach has released two solo albums. 7:30 p.m. No cover. 285 Northgate Dr., Warrendale.

4) The Penguins face off again tonight against the Washington Capitals in the second round of the NHL playoffs tonight at 7:30 p.m. Good luck to the Pens as they try to go for a Stanley Cup Three-peat! Next is another home game Thursday night. PPG Paints Arena. 1001 Fifth Ave., Uptown.