1) While reviewing the John Van Hamersveld pop art exhibit recently at Greensburg’s The Westmoreland, one of the rock concert posters had Charlie Musselwhite on it. I had heard a little bit about him previously, but wasn’t overly familiar with him. Then I saw that he will be performing at the August Wilson African American Cultural Center this month and decided to find out more about the musician. Musselwhite is a virtuoso blues harmonica player who rose to prominence in the 1960s. Living in Chicago during the time of the great blues scene there, he became good friends with John Lee Hooker, Buddy Guy, and even knew Muddy Waters. In the late ‘60s he moved to San Francisco and was part of the city’s exploding music scene. Musselwhite supposedly was the inspiration for the character of Elwood Blues in The Blues Brothers film. He is a member of the Blues Hall of Fame. Ben Harper and Musselwhite recorded an album together in 2013 titled, Get Up! One of the tracks is “I’m In I’m Out And I’m Gone.” 8 p.m. 980 Liberty Ave., Cultural District. 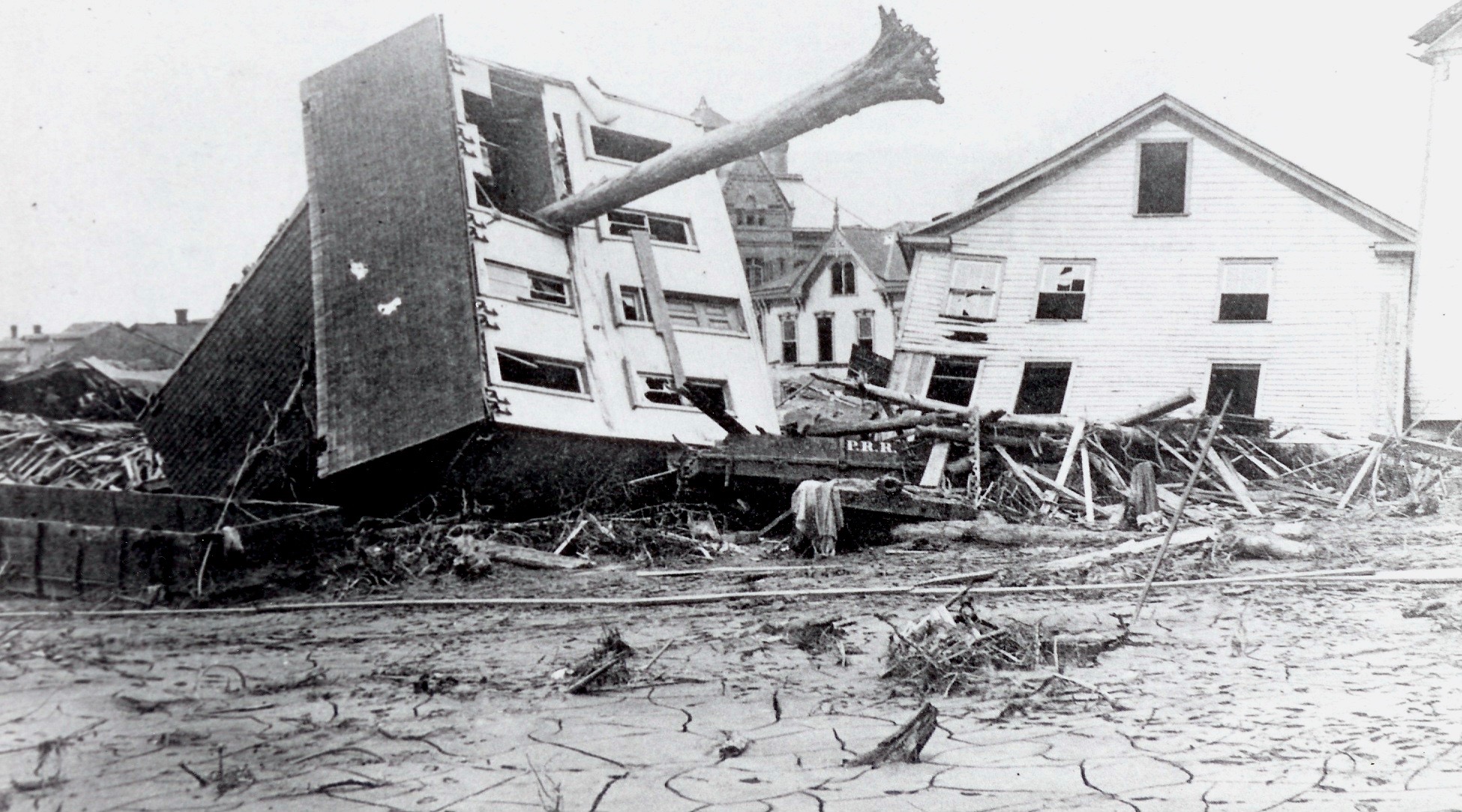 When the Johnstown Flood swept away this house and skewered it with a tree trunk, the people somehow survived. Many were not so fortunate. (photo: archived by Ron Shawley, Executive Director, Laurel Highlands Historical Village. Shared under CC License 3.0 Unported.)

2) The Johnstown Flood of 1889 still ranks as one of the most deadly disasters in U.S. history. Re-enacting what it was like to live through the ordeal, Mountain Playhouse of Jennerstown stages Rob Barron’s play 5/31/1889: The Flood. Decades before the flood, a dam was built above Johnstown on the Little Conemaugh River, to form a not-so-little reservoir for the canals that served Pennsylvania’s early economy. After railroads replaced canals, a group of wealthy Pittsburghers (led by Henry Clay Frick) bought the reservoir for vacation use as a private lake. Normally the stream coming out of it descended gradually through a winding valley. When record rainfall swelled the lake and broke the dam, the wall of water thundering down equaled the volume of the Mississippi at its largest, killing more than 2,000. Playwright Barron is chair of the Theatre and Speech Department at City College of New York. Mountain Playhouse commissioned and first presented his Flood play in 2004; this year’s edition marks the 130th anniversary of the calamity. 3 p.m. Continues through September 29. 7690 Somerset Pike, Jennerstown. (MV)

3) Pittsburgh’s Exhalations Dance Theatre is a company for dancers and choreographers who’ve chosen other careers but wish to keep practicing their art at a professional level. Members audition to join, then work hard creating new performances for the public. The latest Exhalations show is Time: Unbound, a collection of original dances related to the title theme, which should appeal to anyone interested in unbinding time rather than managing it. You’ll see pieces danced to music by Twenty One Pilots, Zammuto, and others. Choreographers for Time: Unbound include the directors and members of Exhalations along with guest choreographer Kelsey Bartman of Texture Contemporary Ballet. 5 p.m. Last day. At the Charity Randall Theatre in the Stephen Foster Memorial, 4301 Forbes Ave., Oakland. (MV)

4) Performance artist and writer Kim El has been a multitalented presence on the Pittsburgh-area arts scene for years. Not saying that she’s old—just experienced—and much of her work includes reaching out to people in the community, whether through teaching or through dramatic pieces that convey their experiences. This month brings a stage production of Kim El’s The Sunday God Gave Me. The play is about domestic violence, its effects on children in the home, and the healing and renewal that can follow. Kayla Edmunds and Tanisha Shaw are featured. 3 p.m. Ends today. New Hazlett Theater, 6 Allegheny Square East, North Side.  (MV)