1) One of the most successful “American Idol” contestants who didn’t end up winning the competition, rocker Chris Daughtry and his eponymous band, is coming our way. After collaborating with the likes of Slash, Sevendust, and Santana, he has taken his act on the road since he was a finalist on the show in 2006. Reminiscent of ’90s grunge and rock, Daughtry’s sound is influenced by Creed, Live, and Stone Temple Pilots, among others. 7:30 p.m. Palace Theatre, 21 W. Otterman St., Greensburg. (EC, RH) 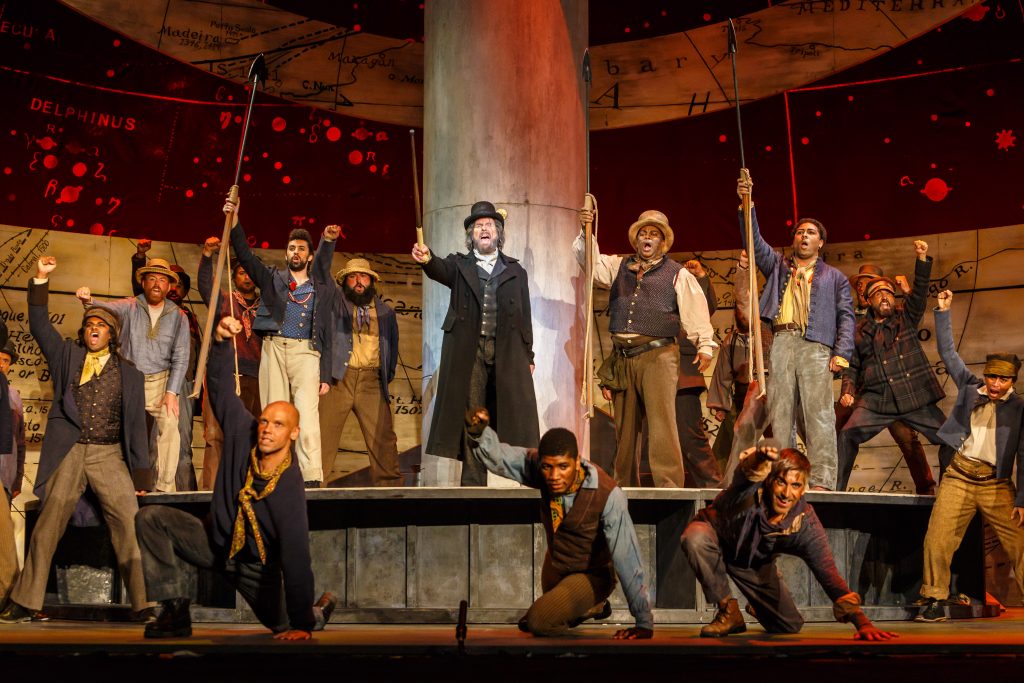 Captain Ahab (Roger Honeywell) riles up the Pequod’s crew into a frenzy over the thought of killing white whale ‘Moby-Dick’ in Pittsburgh Opera’s stage adaptation of the book. Photo: David Bachman.

2) When epic novels are adapted for the stage or screen, radical surgery is required. For Les Miz, the richly intertwined stories in Victor Hugo’s book had to be pruned back so much that it’s a wonder the musical even worked, let alone became a hit. Pittsburgh Opera is presenting the operatic version of Moby-Dick, which makes the cut (literally) in another way. Herman Melville’s novel has a core drama—Captain Ahab’s pursuit of the white whale—running through oceans of other stuff, such as essays about whales and sea life, and side stories full of ironic humor. The other stuff is spellbinding to read but Ahab’s mad quest can storm ahead without most of it. Moby-Dick the opera takes that route and, of course, cranks up the intensity by adding a proven emotion-enhancer: opera music. Composer Jake Heggie and librettist Gene Scheer premiered Moby-Dick at Dallas Opera in 2010. The production you’ll see here was co-produced by Pittsburgh Opera and Utah Opera. Ahab is tenor Roger Honeywell, who reportedly scorched the rafters with his performance in Salt Lake City earlier this year. The cast includes dancers from Pittsburgh’s Attack Theatre. Sound and fury aplenty, mates. 7 p.m. Performances through March 25. Benedum Center, 237 7th St., Cultural District. (MV)