1) You probably know someone who is a misanthrope—a person who doesn’t like people. And to the casual listener, that’s what comedian Bill Burr might seem to be. He’s got a last name that fits his cynical style, which involves buzzing away like a dentist’s burr into the human foibles of just about everybody. It would be hard to name a personality type, body type, or demographic group that he hasn’t mocked mercilessly … and yet the crowds keep coming, and they laugh. Maybe it’s because he does it all with a big infectious grin, like the class clown in high school who couldn’t stop clowning. Which in fact may be what he really is. Burr hosts a weekly web series called “The Monday Morning Podcast.” He has an animated TV series, “F Is for Family,” that airs on Netflix. Burr also played Patrick Kuby in the AMC crime drama “Breaking Bad.”

The pride of Swissvale, (and Pittsburgh) PA, Billy Gardell will perform his stand-up comedy act tonight and tomorrow night at the Benedum Center. Gardell, best known for portraying Officer Mike Biggs in the hit CBS sitcom “Mike & Molly,” has many other film and TV roles including: Bad Santa, Avenging Angelo, “Young Sheldon,” and “Dice.” In 2017 he played the role of Colonel Tom Parker in CMT’s “Sun Records” TV series. Gardell garnered a Daytime Emmy nomination as Best Gameshow Host for “Monopoly Millionaires Club” in 2016. His very first TV credit was in 2000 in “The King of Queens.” A seasoned stand-up comedian with several headliner comedy TV specials, he first broke into the business when a co-worker at his warehouse job bet him he wouldn’t do a set at a comedy club’s open mic night. After a run of successful shows he was opening for the likes of George Carlin and Dennis Miller. 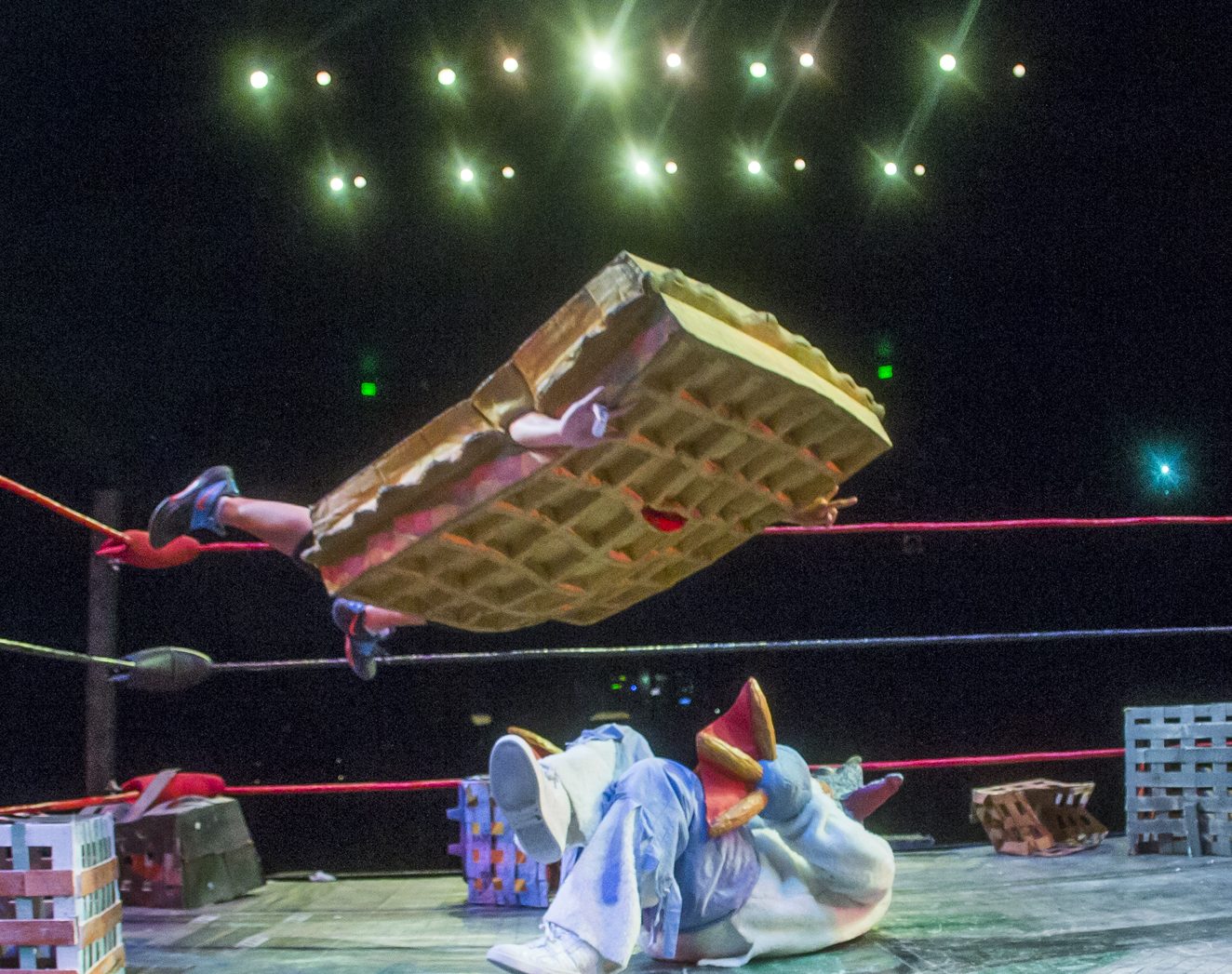 Modern theater knows no limits. The airborne attacker is more than a mere waffle. Her name is French Toast. Other beings abound in ‘Kaiju Big Battel,’ which visits the Byham. (photo courtesy of Studio Kaiju)

2) Kaiju is a Japanese film genre involving giant, city-wrecking monsters. Godzilla is the most recognizable example, and Pacific Rim, directed by Guillermo del Toro, pays homage to the genre. Here’s your one-night chance to see some monsters not on screen but in the ring—the boxing ring, in the touring show Kaiju Big Battel. That’s right, live monsters will duke it out for—what else?—the fate of planet Earth. Contenders include Sky Deviler, Kung-Fu Chicken Noodle, Dusto Bunny, Uchu Chu the Space Bug, and Dr. Cube. The last of these isn’t some N.W.A Dr. Dre-Ice Cube hybrid, but rather a mad scientist … with a cube for a head. Because of course. There’s a boxing referee to oversee this delightful spectacle. If all of this wasn’t enough of a draw, DJ Inception will be spinning during an after party in the lobby of the Byham Theater. 101 6th St., Cultural District. (CM)