1) Calling Aurélien Bory’s Compagnie 111 a dance company is a little like calling Google a search-engine company—it’s true, but that’s not all they do. Bory and company visit from France to stage the U.S. premiere of Bory’s Espæce, which promises to be memorable. The performers include an acrobat, a classical soprano, a comedian, a contortionist, and for good measure a dancer. Not to mention the gigantic hinged wall, a rolling, opening-and-closing set piece with which the performers contort, dance, and so forth. Espæce is dedicated to the late French writer Georges Perec, familiar to many English readers for his novel Life: A User’s Manual. Perec also wrote nonfiction, such as Espèces d’Espaces (Species of Spaces), and Espæce is a contraction of that title. On seeing the piece performed in France, one reviewer wrote that it evokes “minimalist fictions with existential resonances.” Can Google do that? Presented as part of the Pittsburgh International Festival of Firsts at the August Wilson Center. 8 p.m. tonight and tomorrow night.  980 Liberty Ave., Cultural District. (MV)

2) Of Mice and Men is more than a hard-luck tale from the Depression. It’s an enduring fable about two friends whose dreams are wrecked by their own good intentions and shortcomings. For author John Steinbeck, the work was also a literary experiment. He wrote it as both a short novel and a play, using the same story and dialogue. And the play—which opened shortly after the book’s release, in 1937—became a classic buddy-act vehicle. The ill-fated migrant workers George and Lennie have been played by famous duos ranging from Burgess Meredith and Lon Chaney Jr. to Gary Sinise and John Malkovich. Pittsburgh’s  Prime Stage Theatre presents Of Mice and Men with L.A.-based actor Corey Rieger as George and Liam Macik (past Artistic Director of Throughline Theatre) as Lennie. This special production is done in partnership with the National Steinbeck Center of Salinas, California, and is directed for Prime Stage by Scott P. Calhoon. 8 p.m. Performances continue through November 11 at the New Hazlett Theater. 6 Allegheny Square East, North Side. (MV) 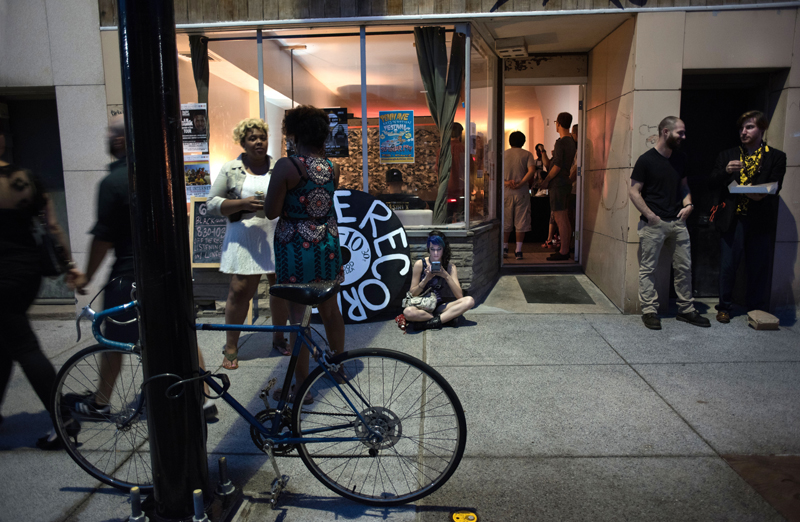 As night falls and the temperatures begin to cool, Pittsburghers gather on Penn Avenue to converse and gallery-hop. (Photo: Martha Rial.)

3) Persons wishing to experience art and music in the crisp fall air will do well to take part in the monthly Unblurred events along Penn Avenue in Garfield. They’re on the first Friday of each month. And what’s up is quite a lot. Art galleries along the street are open—the Silver Eye Center for Photography, Level Up Studios, and several more—as are other shops, eateries, and so forth. Many have music or performances. The Garfield Night Market, with stalls and vendors selling a wide spectrum of interesting goods, operates in summer. Above all, Unblurred is a fine occasion to simply hang out, mill about, and enjoy. 6 p.m. till later at night, 4800 through 5500 blocks of Penn Ave., Garfield. (MV)