1) In Alaska, the part of the United States that we inhabit is called the Lower 48. Theater fans here see very few plays about Number 49. But Pittsburgh theater artist Gab Cody hails from Juneau, where her family lived before moving lower-ward. Juneau is in the Alaskan panhandle, longtime home of the Tlingit, who have an extremely interesting history of which totem-pole carving is only one small aspect. The aspect relating to Cody is that when young, she had Tlingit foster-siblings, with whom she then lost touch. Her new work Inside Passage—a Cody-esque multimedia production—is the story of a belated journey back, to try to reconnect. Inside Passage mixes live acting with film footage. The play explores issues of identity, belonging, and unity, and it is presented by Quantum Theatre in a Quantum-esque location: at Provident Charter School (the former North Catholic High School). 8 p.m. Performances through March 25. 1400 Troy Hill Rd., Troy Hill. (MV) 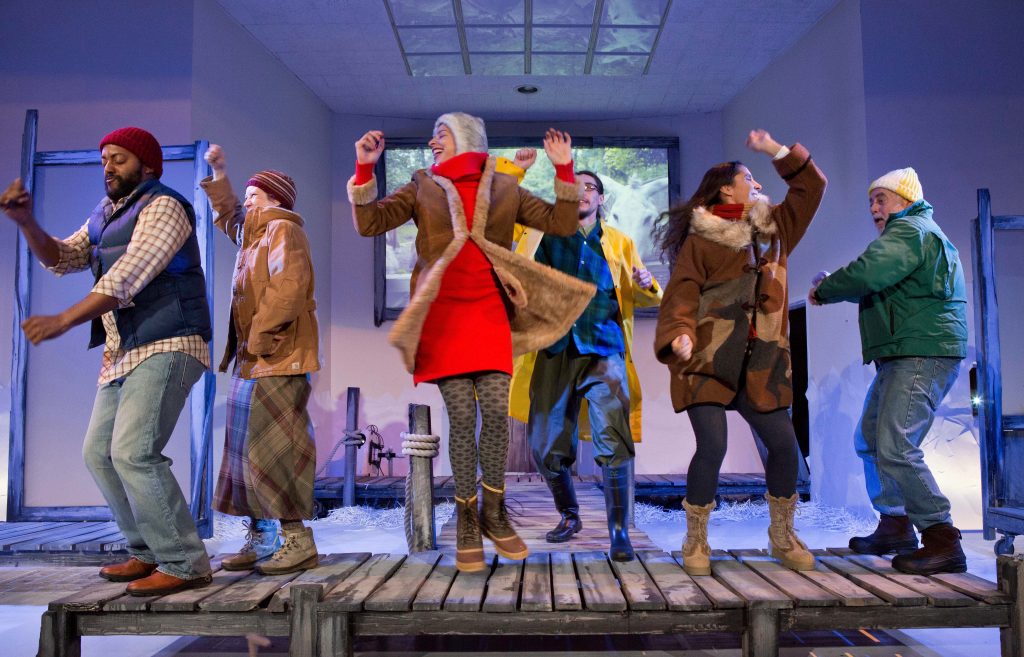 There are strange things done in the midnight sun, and Gab Cody’s multimedia play “Inside Passage”—a culture-crossing journey to Alaska—appears to be one of them. Photo:Heather Mull.

2) Carnegie Mellon’s School of Drama re-opens its mainstage season with The Drowsy Chaperone. This 2006 winner of five Tony Awards is both a parody of old musicals and a tribute to them, written as a play within a play. The central character is a shy fellow who sits at home alone listening to vintage recordings of Broadway tunes from the 1920s. When he puts his favorite onto the turntable—the soundtrack of an exuberantly hokey fictional show called, well, The Drowsy Chaperone—the cast members magically appear and start performing the show. Songs and music are by Lisa Lambert and Greg Morrison; book by Bob Martin and Don McKellar. Philip Chosky Theater at Carnegie Mellon. 8 p.m. Performances through March 3. 5000 Forbes Ave., Oakland. (MV)