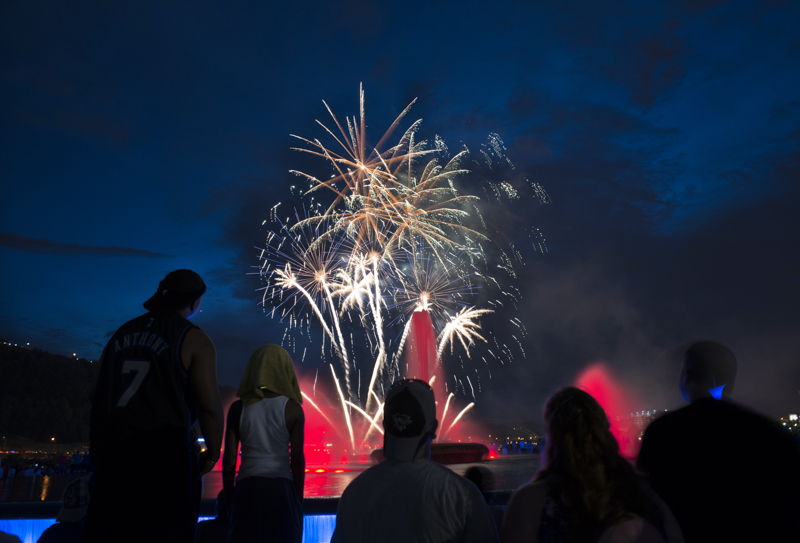 pale Fireworks over the Point create the big bang, though not the only bang, on the Fourth. (Photo: Martha Rial)

1) You want fireworks, you got ’em. Fourth of July pyrotechnics return to the Point this year, commencing at twilight. Preceding the launch, Point State Park will be open for family-style picnicking “with patriotic music and food vendors provided from 6 to 10 p.m.,” says a release from Mayor Peduto’s office. 601 Commonwealth Pl., Downtown. Elsewhere, Kennywood Park is planning fireworks nightly from July 2 to 4 as part of its Celebrate America event. These fireworks can be viewed from vantage points nearby or across the river, but if you patronize the park itself, Kennywood promises activities including “music performances, magic acts, and the always-popular Wiener 100 dachshund races.” 4800 Kennywood Blvd., West Mifflin. At this article’s press time—yes, there are press times on the internet!—some communities in our metro area were still deciding whether to have their traditional July 4 fireworks and public celebrations this year. You may wish to check the web pages for, say, Mt. Lebanon. And, though it doesn’t involve fireworks, you can spend daytime on the Fourth learning about some of our region’s First Americans. Meadowcroft Rockshelter and Historic Village, a National Historic Landmark and a site of very early human habitation, offers a special day with tours and activities from 10 a.m. to 4 p.m. 401 Meadowcroft Rd., Avella. (M.V.)

2) It’s the Fourth of July, the drinks will be flowing at Baja Bar & Grill and so will the band–The Flow Band. They like reggae jammin’ with you, so catch their afternoon jam at Baja Bar & Grill’s outdoor poolside Tiki Hut. The Flow Band is one of Pittsburgh’s top reggae bands. 2 to 6 p.m. 1366 Old Freeport Rd., O’Hara Township.