1) Prog-rock group Kansas, is actually from Kansas, Topeka specifically. The group had a heartland rock sound that was a sweet mix of vocal harmonies, keyboards, guitars, drums, and violin. Kansas didn’t get a really big taste of success until the albums Leftoverture (1976) and Point of Know Return (1977), with hit singles: “Carry On Wayward Son,” “Point of Know Return,” and “Dust in the Wind.” Kansas has generated three multi-platinum albums. The band is celebrating the 40th anniversary of Point of Know Return” and will play the album in its entirety along with other Kansas favorites and deep cuts. 8 p.m. Heinz Hall, 600 Penn Ave., Cultural District. (RH)

2) Pittsburgh Opera once again stages a production of the classic Madama Butterfly by Giacomo Puccini. The opera is a tale of love gone wrong between an American sailor, Benjamin Franklin Pinkerton, and a Japanese woman, Cio-Cio San, who gives up everything to be with him. The opera is a cultural touchstone: in 1996, Weezer named its sophomore album Pinkerton, and the CD contains Puccini’s printed lyrics in Italian. Hard to believe, but when the opera premiered in Milan in February 1904 it wasn’t a success, partly because the singers didn’t have enough time to rehearse. Puccini revised the opera, adding an Act III out of Act II, and it ran again (successfully) in Brescia, Lombardy, Italy later that year. Now it runs at the Benedum Center. 8 p.m. with a pre opera talk at 7:30 p.m. Performances continue through October 14. 237 7th St., Cultural District. (EC, CM)

3) Wouldn’t it be cool to get a look inside interesting—normally off limits— at places like Mayor Peduto’s office, Teutonia Maennerchor, the Priory Hotel, First Prebyterian Church, and many more. That’s the idea behind Doors Open Pittsburgh. For all the doors that will be open and more info visit their website. This weekend it’s OK to be nebby! 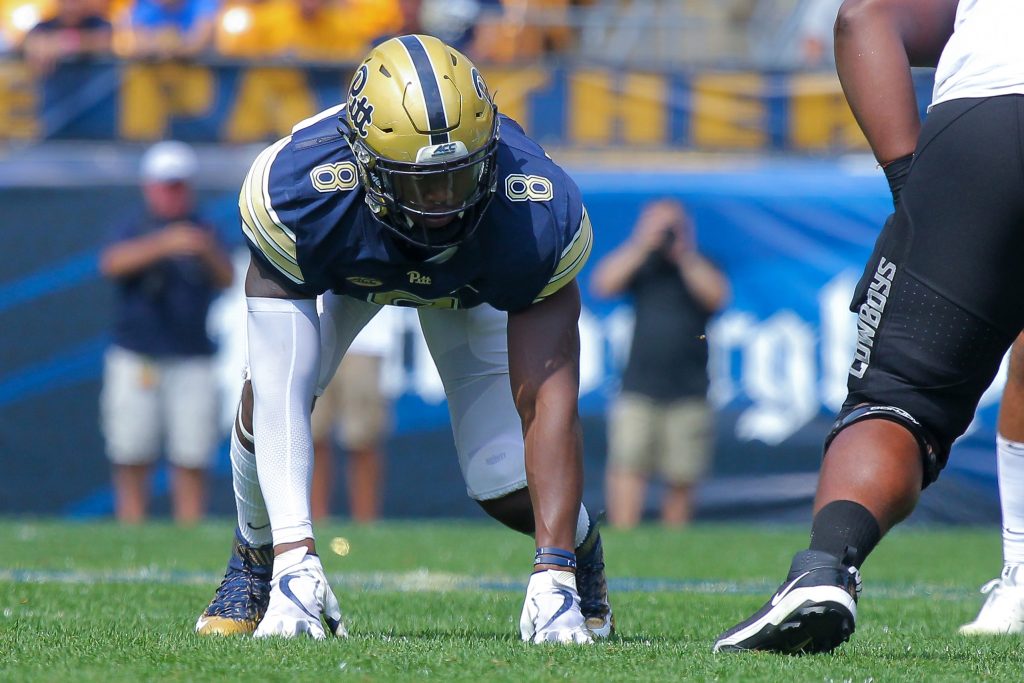 Pitt Panthers defensive lineman Dewayne Hendrix is in the ready position to get after opposing quarterbacks. Photo: Jeffrey Gamza/Pitt Athletics.

4) Our hometown University of Pittsburgh Panthers as part of the homecoming weekend festivities, play host to the Orange of Syracuse University at Heinz Field. Coach Narduzzi is trying to right the ship after losses so far this season to Penn State, North Carolina, and the University of Central Florida. As the saying goes there’s no time like the present! Kickoff is at 12:20 p.m. 100 Art Rooney Ave., North Shore.