1) Khalid is the first and only artist to have simultaneously all of the top five singles on Billboard’s R&B Songs chart. He accomplished this feat just this past April too. The following month he became the most-streamed artist on Spotify. (Ed Sheeran surpassed in June.)  Khalid has released two albums, most recently 2019’s Free Spirit. His discography, then, should be excellent fodder for his headlining set at PPG Paints Arena. What a trajectory. He opened for Lorde at arenas in 2017, and now he’s headlining them. His other work with Lorde includes appearing on a remix of her song “Homemade Dynamite” along with SZA and Post Malone. Khalid first charted with his debut single, “Location,” from his debut album, 2017’s American Teen. He’s been nominated for five Grammys, winning none, but it’s still very early in his already remarkable career. Clairo opens. 7:30 p.m. 1001 Fifth Ave., Uptown. (CM) 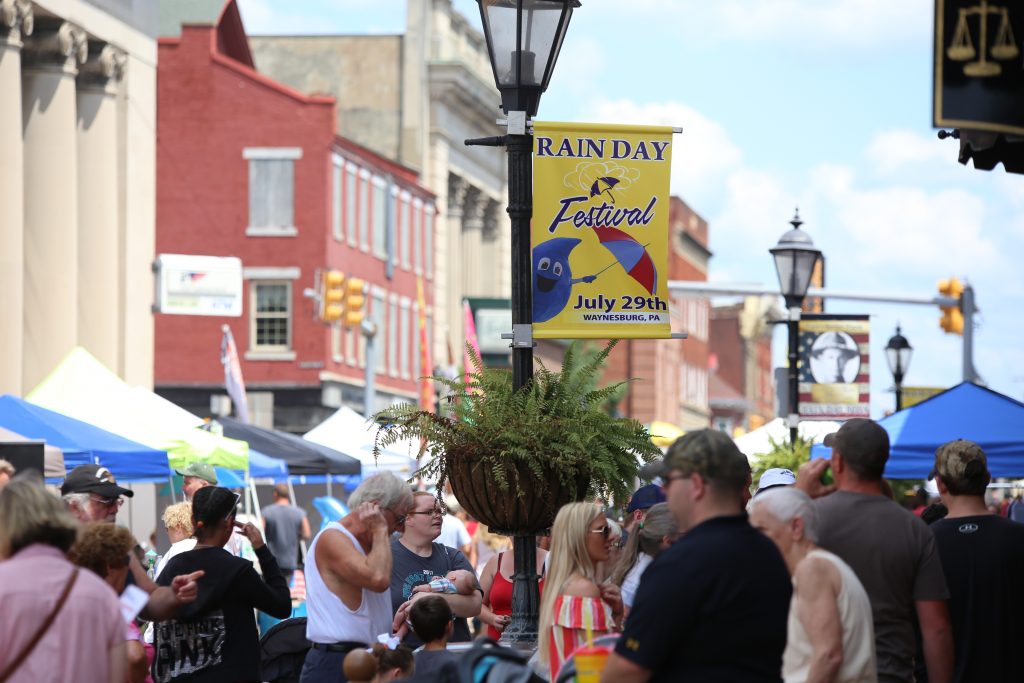 It’s very unusual, but everyone attending this event is hoping that it will rain. After all, it is the Rain Day Festival in Waynesburg. Notice the banner with the festival’s very cool mascot, Wayne Drop. (photo: Rain Day Festival and Waynesburg borough)

2) Most events prefer it not to rain on their parade so to speak, but that’s not the case in Waynesburg for their annual Rain Day Festival. The genesis of the event occurred in the late 1800s when an unknown farmer said to Waynesburg pharmacist William Allison that it always seemed to rain on his birthday, July 29. That interested Allison, and he started keeping a record as to whether it rained on that date or not. He subsequently passed the task on to others, and a rain record has been kept ever since. It has rained on that date 115 out of 145 years. If rain drops keep falling on your head on July 29, why not have some fun with it? And that’s exactly what Waynesburg did. In honor of their July 29 liquid sunshine, they hold a festival in Downtown Waynesburg each year.

The day kicks off with a buckwheat pancake breakfast and continues with the best in area entertainment capped off by a performance by the Nashville, Tennessee, honky tonk trio The Eskimo Brothers (7 p.m.). Other activities include an umbrella contest, town selfie with the mascot Wayne Drop, kids activities including a petting zoo, dunk booth, judo and dance performances, and a diaper derby. Miss Rain Day will also be holding court. Plus food and beverage offerings. Also see the Umbrellas Over Rain Day Sky Project art installation. Every year the mayor of Waynesburg, currently the honorable Brian D. Tanner, bets a local or national celebrity a hat that it will rain. If it does, then the celebrity has to give a hat to Waynesburg. If it doesn’t rain, the mayor gives a hat to the celebrity. This year’s hat bet is with KDKA TV Sports Director, Bob Pompeani. Hopefully climate change won’t disrupt the wonderful Rain Day tradition. 10 a.m. to 9 p.m. Rain or shine, preferably rain. Downtown Waynesburg.

3) Bridges & Bourbon restaurant and bar is teaming up with Wigle Whiskey to host a bourbon dinner this evening. Guests will indulge in a four-course meal skillfully prepared by noted Executive Chef David Racicot, paired with selections from Wigle Whiskey. Pairing highlights for the event include: Maine bluefin tuna with lightly grilled foie gras paired with Wigle Oaxaca; and Labelle Farm duck with cherry, and hazelnut, paired with Wigle Port Rye. For more information and reservations visit the event page.