1) Face-painted rock bad boys, Kiss, are one of the top-selling bands of all time. Started in New York City in 1973, the band was one of the early pioneers in rock theatrics incorporating fire, smoking guitars, flash pots and rockets into their shows. Still driven by founding members Paul Stanley and Gene Simmons, the band has ridden the wave of classic rock nostalgia and still attracts sizable crowds. The makeup and costumes are based on cartoon characters they created, with Stanley as The Starchild and Simmons as The Demon. Several of their biggest hits rose the charts to rock radio fame in the ‘70s including “Rock ‘n Roll All Night” “Beth” and “Detroit Rock City.” Yes, Kiss is a very dramatic band but they have also created powerful rock songs and ballads. Kiss is on their End of the Road World Tour. Catch ‘em while you can. Special guest is David Garibaldi. 7:30 p.m. The Pavilion at Star Lake, 665 Rt. 18, Burgettstown. 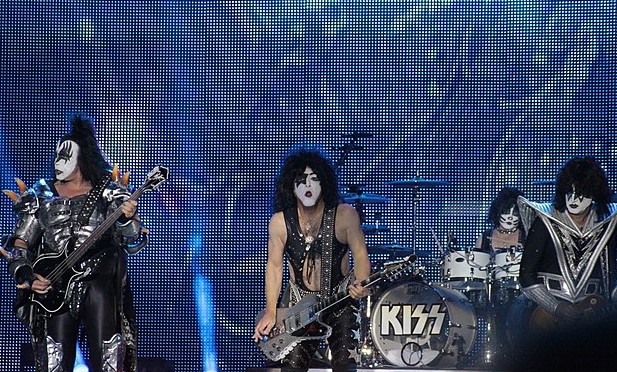 Kiss is on their farewell tour and will be performing at the Pavilion at Star Lake this month. Pictured: Kiss at Hellfest in Clisson, France in 2013. (photo: Llann Wé and Wikipedia)

2) Black Pumas will perform at Mr. Smalls Theatre. The duo, which is based in Austin, Texas, mixes multiple genres, including psychedelic soul and R&B. On the road, they perform with a full backing band, as seen on such talk shows as “Jimmy Kimmel Live!” Their 2019 self-titled debut album generated plenty of buzz, and they received a Best New Artist nomination at the 2020 Grammy Awards. The party continued when the deluxe edition of their debut received an Album of the Year nomination in 2021. “Colors” is a standout original song, and some notable covers by the group include “Fast Car” by Tracy Chapman and “Eleanor Rigby” by The Beatles. The show is already sold out. 8 p.m. 400 Lincoln Ave., Millvale. (C.M.)