1) Matt and Kim often create big hooks with only a keyboard, drum set, and their infectious voices. That formula clicked on 2009’s Grand, their second album. You might recognize the song “Daylight” from television and film. The Troublemaker Remix of the song features hip hop legends De La Soul. “Good Ol’ Fashion Nightmare” and “Lessons Learned” are other fun tunes. The duo is celebrating the 10th anniversary of Grand with a tour, including a stop at Stage AE. Each tour stop features this notice: “Language is definitely not suitable for all ages because of Kim.” So parents planning on bringing children, you’ve been warned. Matt and Kim’s latest album is 2018’s Almost Everyday. Their music video for “Happy If You’re Happy,” the album’s third single, pays homage to Uma Thurman and John Travolta’s dance scene in Pulp Fiction. Beach Goons open. Doors open 7 p.m. 400 North Shore Dr., North Shore. (CM) 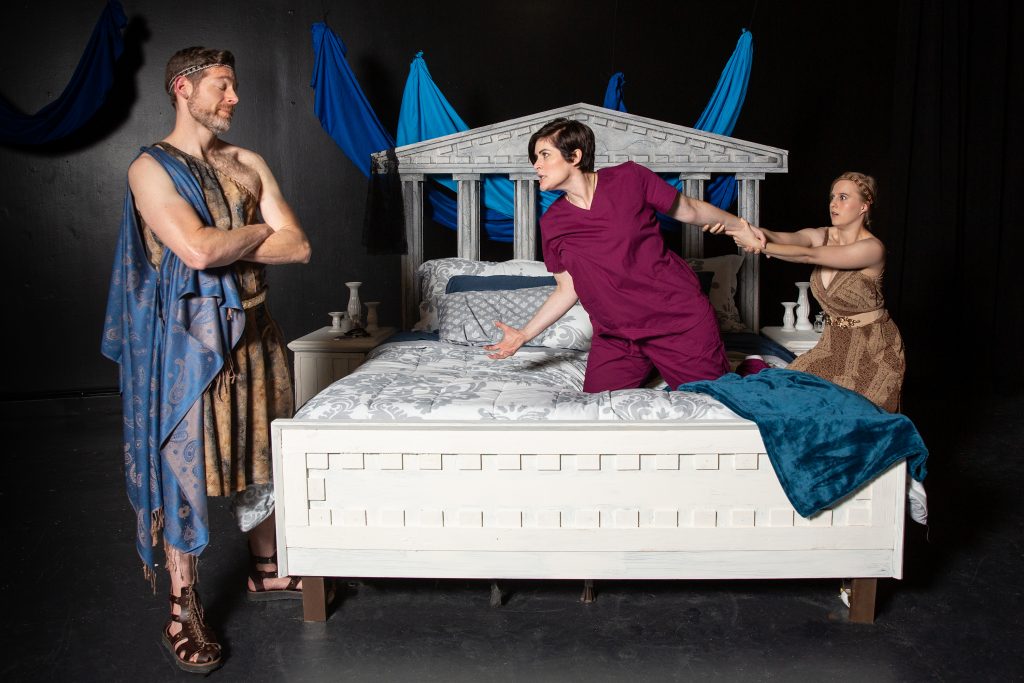 She’s not really Medea, but sure looks like Medea raging at Jason while the Chorus restrains her in ‘Not Medea’ at off the WALL. Actors, L to R are Allan Snyder, Drew Leigh Williams, and Elizabeth Boyke. (photo: Mark Simpson Photography)

2) Too bad “edgy” is a cliché, because it sums up the kind of live theater you’ll see at off the WALL productions. The company produces plays by or about women, always choosing ones that push the envelope in terms of subject matter, style, or both. Last season included Sarah Kosar’s riotous Mumburger, in which a dead woman has willed her remains to be eaten by next of kin, and Johnna Adams’ World Builders, a love story of two mental patients who have clashing fantasy worlds. This season kicks off with a meta-theater takeoff on an old classic: Allison Gregory’s Not Medea. A frazzled working mom attends a performance of the Greek tragedy Medea—about a jilted sorceress who lashes out in murderous revenge—and sort of identifies with her, but figures the play could use some alterations. Not Medea was a hit of the 2016 American Contemporary Theater Festival. Allison Weakland directs it for off the WALL. See our review. 8 p.m. Performances continue through October 19. 25 W. Main St., Carnegie. (MV)

THE OFFICE! A MUSICAL PARODY by Bob and Tobly McSmith. Oct. 18 – 19, touring production at the Byham Theater.

Patrons must be advised that this is an unauthorized parody. But writers Bob and Tobly McSmith are veteran parodists, and they surely have good lawyers, so it’s probably OK to see their musical send-up of the TV series “The Office” at the Byham Theater. 7:30 p.m. 101 6th St., Cultural District. (MV)