“Ooh girl, shock me like an electric eel,” is a great line from “Electric Feel” by the band MGMT. Their sound has a driven rhythmic beat with hauntingly harmonic vocals, smooth guitars, and prominent keyboard play. It’s a new age, trippy rock. MGMT was formed by Benjamin Goldwasser and Andrew VanWyngarden at Wesleyan University in 2002 when they were freshmen. Their debut album, Oracular Spectacular, hit No. 1 on the Billboard Top Heatseekers Chart in 2008 and was named the 18th best album of the decade by Rolling Stone. The album also produced hits “Kids” and “Time to Pretend.” MGMT was nominated for the Best New Artist Grammy in 2010. Originally the band was called The Management but changed their name because another band had the same name. They are touring in support of their 2018 album release Little Dark Age. It is their first new LP in five years. Special guest is Warpaint. Doors open at 6:30 p.m. Stage AE, 400 North Shore Dr., North Shore. (RH) 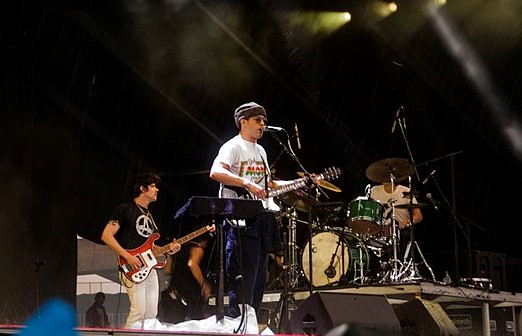 MGMT performing at The Osheaga Music and Arts Festival in Montreal, Canada in 2017. (photo: Mars3 and Wikipedia)

This is called ‘Fly’ and don’t ask why! One of the featured international shows at the EQT Children’s Theater Festival, it’s from Teater Patrasket of Denmark. (photo: Sõren Meisner)

Some people say you’re never too old to enjoy children’s books, and maybe the same is true of theater for children. If you are young at heart, or have kids who are, the big event of the year in Pittsburgh is the EQT Children’s Theater Festival. This four-day festival brings in shows by leading TYA (theater for young audiences) companies from around the world. Featured attractions in 2019 include: an amazing puppet play, Fly, by Teater Patrasket of Denmark. A musical adaptation of the book Emily Brown and the Thing, by the renowned London company Tall Stories. An interactive fantasy for babies and toddlers, Sky and Stone, by the Mexican/Argentine company Teatro al Vacio. AND—at the other end of spectrum—fans of the adult fiction writer Haruki Murakami may wish to catch Murakamification. The author’s surreal stories, such as Kafka on the Shore and The Elephant Vanishes, have inspired the Dutch company Arch 8 to create a “moving” theater piece that will wander through the streets of downtown Pittsburgh, with all sorts of surreality along the way. Check the Festival website for schedules and venues of the various shows. Continues through May 19. Multiple locations, Cultural District. (MV)

3) Don’t let the title dissuade you from seeing one of the funniest modern musicals. The 25th Annual Putnam County Spelling Bee is neither corny nor childish. It’s more like a parody of a dysfunctional society (ours)—and though it’s about a spelling bee, it is not a musical for children. Although you might bring your older kids if you are OK with exposing them to songs like “My Unfortunate Erection,” and a pronouncer whose word definitions include “Aioli: mayonnaise for assholes.” The musical flirts with being classified as Theater of the Absurd. One contestant, William Morris Barfée, spells words with his foot. Composer William Finn gave him a song celebrating his rare gift, “Magic Foot,” and writer Rachel Sheinkin’s book won the 2005 Tony Award for Best Book of a Musical. The show includes audience participation so be prepared to spell. Stage 62, a top-tier community theater company specializing in musicals, presents The 25th Annual Putnam County Spelling Bee in the Music Hall at the Andrew Carnegie Free Library. 8 p.m. Performances continue through May 19. 300 Beechwood Ave., Carnegie.(MV)