1) Mike Love, a founding member and singer/songwriter for the quintessential American pop-rock band—The Beach Boys—brings his version of that band to Greensburg’s Palace Theatre for a concert. Love reunited several years back with Brian Wilson and other surviving original members for a tour and album, and he performs tonight with his band under the Beach Boy’s name. The Beach Boys created many top hits, including, “Surfin’ USA” (which Wilson wrote lyrics for and was heavily influenced by Chuck Berry’s “Sweet Little Sixteen.” After some wrangling Berry received a co-writing credit), “California Girls,” and “I Get Around.” Love co-wrote many Beach Boys hits including “Good Vibrations.”  He has also written in a different media, his memoir Good Vibrations: My Life as a Beach Boy was a New York Times Bestseller. They are on their Reason for the Season tour and will be playing Christmas songs and Beach Boys’ hits. 7:30 p.m. 21 W. Otterman St. 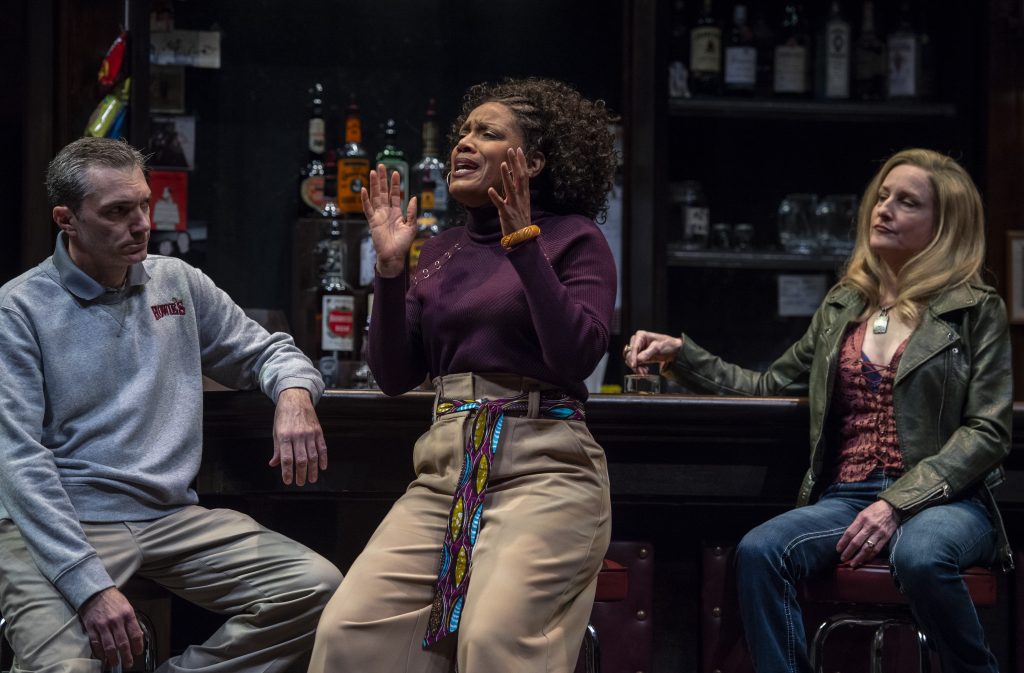 Much of the action in ‘Sweat’ takes place in a bar.(left to right) Tony Bingham, Tracey Conyer Lee, and Amy Landis.

2) Set in nearby Reading, Pennsylvania, Sweat tells the story of nine friends. The play begins in 2008 when two men meet their parole officer. The next scene begins during happier times in a bar in 2000. The bar’s patrons work at Olstead’s Steel Tubing. The audience observes what happens over the next eight years, including layoffs and the fraught renegotiation of union contracts. It’s set over a decade ago, but the play’s themes remain timely. Part of that might be because playwright Lynn Nottage interviewed manufacturing employees in Reading as part of her research. And if all of that wasn’t enough, the play won the Pulitzer Prize for Drama in 2017. Nottage is the only woman so far to have won the drama prize twice; the other time was for Ruined in 2009. Pittsburgh Public Theater performs Sweat. Justin Emeka directs. 7 p.m. Continues through December 9. O’Reilly Theater, 621 Penn Ave., Cultural District. (CM)