1) Motion City Soundtrack will perform a sold-out concert at the Roxian Theatre. Vocalist and guitarist Justin Pierre and guitarist Joshua Cain formed the band in Minneapolis, Minnesota in 1997. After many line-up changes, the group solidified into a quintet for its debut LP, 2003’s I Am the Movie. One of the new members was keyboardist Jesse Johnson, who in concert often performs a “moogstand,” that is, a handstand on his Moog synthesizer. The Moog is not just a prop though; it’s a staple of their sound, which vacillates between rock, power pop, and emo. Cain is credited with integrating the Moog into their compositions. They were mainstays on the now defunct Van’s Warped Tour, and they also performed at the local Thrival Music Festival in 2014. Their latest album is 2015’s Panic Stations. The Sidekicks open. 8 p.m. 425 Chartiers Ave., McKees Rocks. (CM) 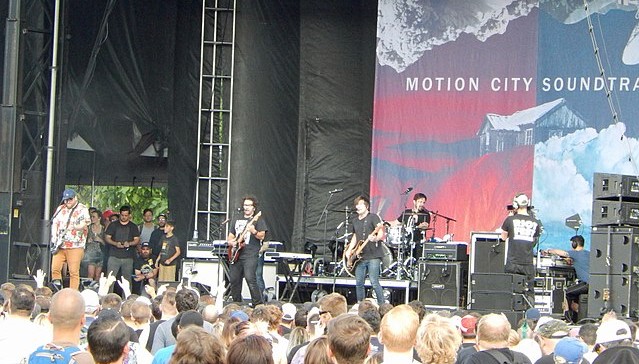 Motion City Soundtrack in action at the 2016 Riot Fest in Chicago. (photo: swimfinfan and Wikipedia).

2) Looking for a little excitement in early January? One possibility is the Food Truck A Palooza at the Monroeville Convention Center. The event by Good Taste! Pittsburgh features 30 global food trucks with fare from around the world including the good ol’ U.S.A. Other offerings include an ice bar, beer, spirits, Kid’s Zone, global music, games and more. Noon – 5 p.m. 209 Mall Blvd.

PLAIN FUN #2 WITH ERIC AND ERIK (storytelling, songs, comedy). Jan. 4 only, 7 p.m., the artists at The Palace Theatre.

3) Eric Slivoskey is mostly a stand-up comic and Erik Piisilla is mostly a singer and guitarist, but they team up for acts that also include storytelling and such, and to kick off the new year they’re visiting The Palace Theatre with a show called Plain Fun #2 with Eric and Erik. Both men are natives of Latrobe, so it’s a homecoming show of sorts, for which they’re doing Westmoreland County nostalgia mixed with their usual clowning and music. Piisillia’s son Makai joins the duo to play bass guitar and maybe more. 21 W. Otterman St., Greensburg.