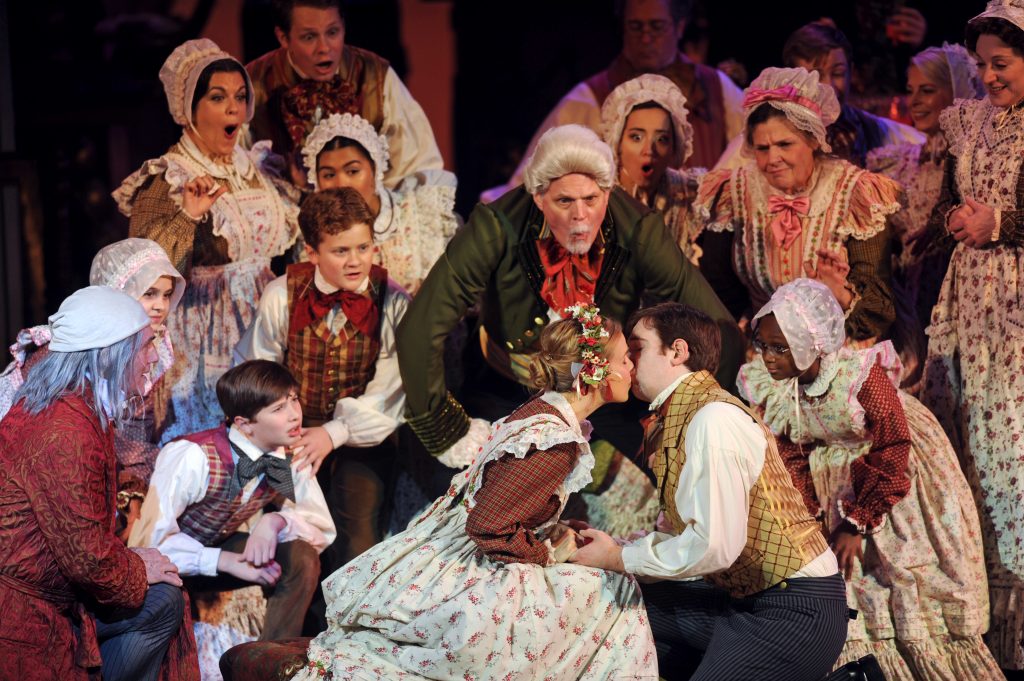 Tim Hartman, as Mr. Fezziwig, scrupulously supervises the kissing kiddies in Pittsburgh CLO’s ‘A Musical Christmas Carol.’ The scene is from last year’s production but Hartman, and the play, return this month. (photo: Matt Polk)

1) Charles Dickens’ A Christmas Carol is considered schmaltz by some but high art by many others. In Japan, the novella has been viewed as one of the great works of English literature—“possibly in a league with Hamlet,” as one Japanese scholar wrote. Distinguished actors who’ve played Ebenezer Scrooge range from Lionel Barrymore to, memorably, Michael Caine in The Muppet Christmas Carol, with Kermit and Miss Piggy as Bob and Mrs. Cratchit. In Pittsburgh CLO’s production of A Musical Christmas Carol, Scrooge is played this year by Pittsburgh and Broadway veteran Mark Jacoby. Returning regulars include Jeffrey Howell and Lisa Ann Goldsmith as the Cratchits, plus Daniel Krell as both Marley’s ghost and young, very-much-alive Marley. The latter was not in Dickens’ original story but he shows up here because CLO uses an adaptation by American playwright David H. Bell, who added scenes that help to flesh out the narrative nicely. 7:30 p.m. Performances continue through December 22. A Musical Christmas Carol plays at the Byham Theater, 101 6th St., Cultural District. (MV)

2) Tonight at Moondogs is the Band Together Over 21 Christmas Party and Fundraiser with jam rockers Jim Donovan & Sun King Warriors headlining. Special guest is Band Together comedian Frankie Principe and additionally the $15 ticket price includes a full dinner buffet. Drink specials, auctions, and a 50-50 raffle will also be part of the fun. 8 p.m. Band Together Pittsburgh provides innovative programming, experiences, and vocational opportunities to enhance the lives of those on the autism spectrum. 378 Freeport Rd., Blawnox.

3) The Affordable Floors were one of the hottest alternative bands in Pittsburgh in the late 1980’s and early 1990’s. They were big winners at the In Pittsburgh News and Entertainment Weekly Music Awards. They reportedly got their name from a sign that they saw for a flooring business along a busy local highway. We can all use some affordable floors and Affordable Floors music. The will be performing at Thunderbird Café & Music Hall in support of their new five song EP, Every Broken Heart Will Mend. It is the Affordable Floors first record of original music since 1995. Dinosoul opens. 8 p.m. 4053 Butler St., Lawrenceville. (RH)