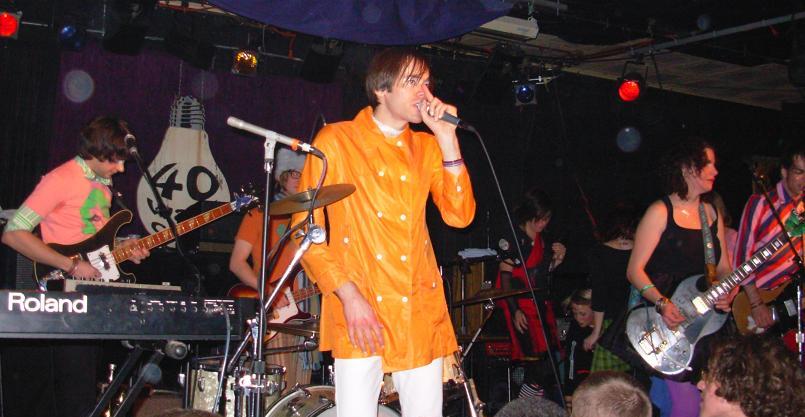 Of Montreal performing in Athens, Georgia in 2005. Photo: Wikipedia.

1) Members rotate and genres change, but Kevin Barnes remains of Montreal’s frontman. He formed the group in 1996 in Athens, Georgia. Of Montreal’s discography is vast and eclectic, but some standouts include 2004’s Satanic Panic in the Attic and 2007’s Hissing Fauna, Are You the Destroyer? After a pivot into EDM-inspired music, of Montreal returns with a more familiar (but no less exciting) psychedelic pop sound on this year’s Ur Fun. The canine-centric video for “Polyaneurism” is particularly, well, fun. They will perform at Mr. Smalls Theatre. (Bizarre Celebrations after party to follow show.) Lily, Horn Horse, and Chariot Fade open. 8 p.m. 400 Lincoln Ave., Millvale. (CM)

2) Classic emo-rock band Dashboard Confessional will headline Stage AE to celebrate its 20th anniversary. Actually, the group, from Boca Raton, Florida, has been around a little longer, but its debut, The Swiss Army Romance, is 20. The original version of “Screaming Infidelities” appears on that album. 2018’s Crooked Shadows is its latest LP. The Get Up Kids open. Doors open 6:30 p.m. 400 North Shore Dr., North Shore. (CM)

3) As if there’s not already enough happening on a normal Saturday on the South Side, today there is the Shamrock Crawl. Here’s the deal: buy a ticket ($20 prior to Saturday, $30 on game day), and you will get reduced prices on drinks, a special Shamrock mug, cover-free access to some of South Side’s best bars, food specials, raffle entry for prizes, and free pictures of the event. 2 – 10 p.m. For participating bars, tickets, and more information visit the Shamrock Crawl website.

4) The River City Brass Band is a top notch orchestra whose mission is to showcase American music culture locally, nationally, and globally. They play various music programs throughout the year.  A very popular one is their Celtic Connections concerts. This year’s is Celtic Connections IV and promises to bridge “the pond” with songs from Ireland, Wales, and Scotland alongside American country music. On the program are a diverse group of songs including  “Highland Cathedral,” “Two Irish Jigs,” and “Country Roads.” Accompanying River City Brass will be Carnegie Mellon Pipes and Drums. The concerts will be held at various schools and at Greensburg’s Palace Theatre on the 7th and Carnegie Music Hall of Oakland on the 12th. 21 W. Otterman St.