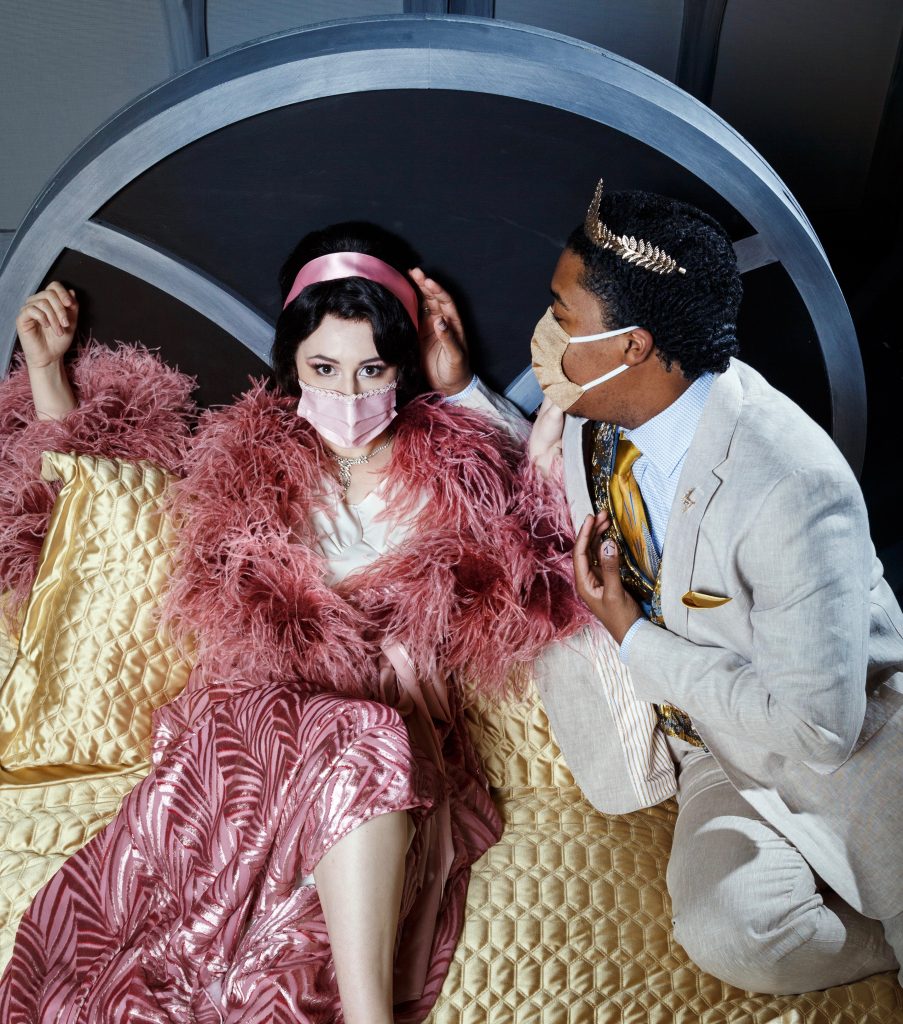 In ‘Semele,’ a headstrong woman plays with fire when she gets in bed with the ruler of the gods. Pittsburgh Opera has soprano Veronique Filloux as Semele and tenor Aaron Crouch as Jove. (photo: David Bachman Photography)

George Frideric Handel’s Semele, at Pittsburgh Opera, is one of those theatrical works that sat dormant on the shelf for many years until being revived and enjoyed in the modern era. Semele got off to a rocky start when it was deemed too risque for its time. Handel, who spent most of his career in London, staged the opera there in 1744. This was just a year after his Messiah—composed to words lifted directly from the Bible—was panned for being too sacred to be performed in such a profane venue as a theater. There is no pleasing some people.

At any rate, Semele opened during Lent, when apparently the audience was expecting something at least semi-sacred or soberly meditative. What they got was an operatic treatment of a legend from Greek mythology, in which Zeus seduces yet another mortal woman, who rejects her human fiancé to pursue Olympian passions. Never mind that the woman’s name right there in the title should have been a tipoff. Semele also drew scorn because it was sung in English, at a time when fussy English opera lovers believed that if it isn’t in Italian, it isn’t really opera. Handel tried tweaking Semele for a second run, cutting the sexier stuff and even, incongruously, mixing Italian arias into the English libretto. This mongrelized version wasn’t a hit, either. Semele wound up consigned to the doghouse for the next 175 years or so.

Finally, during the 20th century, productions in England and elsewhere found a more appreciative response. The opera is now hailed as a rediscovered gem, with rich and varied music that brings out the dramatic twists of a well-drawn story. (The librettist, William Congreve, was himself an accomplished playwright.) Pittsburgh Opera presents Semele for the first time in our city. Stage director Kristine McIntyre, aided by set designer Carey Xu and costumer Jason Bray, has reset the action in the Roaring Twenties. It seems a fitting time period for a fiery, tragicomic tale of a young woman driven by desire to rumble with the godfather.

In line with Covid-19 precautions, Semele is being played in condensed form: a single act of about an hour and a half, to avoid audience mingling at intermissions. Limited in-person seating is sold out but the Friday, May 14 performance will be livestreamed at no charge. The Pittsburgh Opera cast features soprano Veronique Filloux as Semele, tenor Aaron Crouch as Jove—Zeus’s handle for this Handel—and mezzo soprano Maire Therese Carmack as Jove’s irate wife Juno. Music is by the Chatham Baroque ensemble with Antony Walker, Pittsburgh Opera’s music director, conducting. 2425 Liberty Ave., Strip District. (M.V.)

Roundabout Brewery’s Pop-Up Beer Garden is a picturesque stop on the Three Rivers Heritage Trail—a chance to cool down with a cold one after a walk, jog, or bike ride. (If arriving by car, park in the North Franklin Street Trail parking area.) The Kolsch, Pacific Crossing IPA, and Passion Fruit Kveik are some of the popular drafts. Sit back, sip, and watch the barges and boats coast down the Ohio River. Bring your pets Wednesdays and Thursdays. A different food truck parks in front each day. Trucks have included Alberta’s Pizza, Franktuary, La Palapa, Blowfish BBQ, and PGH Tortas. Outdoor seating only. A tent provides shade, but the garden will still close due to rain. Be sure to check ahead. If it does rain, one can always purchase bottles, cans, and food at Roundabout’s stellar main location on Butler Street in Lawrenceville. 1836 Oxline St., Chateau. (CM)