1) Slip on your cowboy boots, button up your finest flannel, and head down to The Pavilion at Star Lake where Jason Aldean takes center stage. Aldean has accumulated many awards over his career, including Male Vocalist of the Year and Vocal Event of the Year at 2013’s Academy of Country Music Awards. He was born in Macon, Georgia and moved to Nashville at 21. His 2005 self-titled debut cemented his success; “Why” became his first number-one single on Billboard’s Hot Country Songs chart. Aldean was performing in 2017 at the Route 91 Harvest Festival in Las Vegas when a gunman fired into the crowd. Fifty-eight people died; another 851 were injured. The following Saturday, Aldean opened “Saturday Night Live” with a rousing cover of Tom Petty’s “I Won’t Back Down.” Petty had died the day following the shooting. Now Aldean is on his Back in the Saddle Tour. His latest and ninth studio album, released in 2019, is simply titled, 9. Opening are Hardy and Lainey Wilson. 7:30 p.m. 665 Rt. 18, Burgettstown. (C.M.) 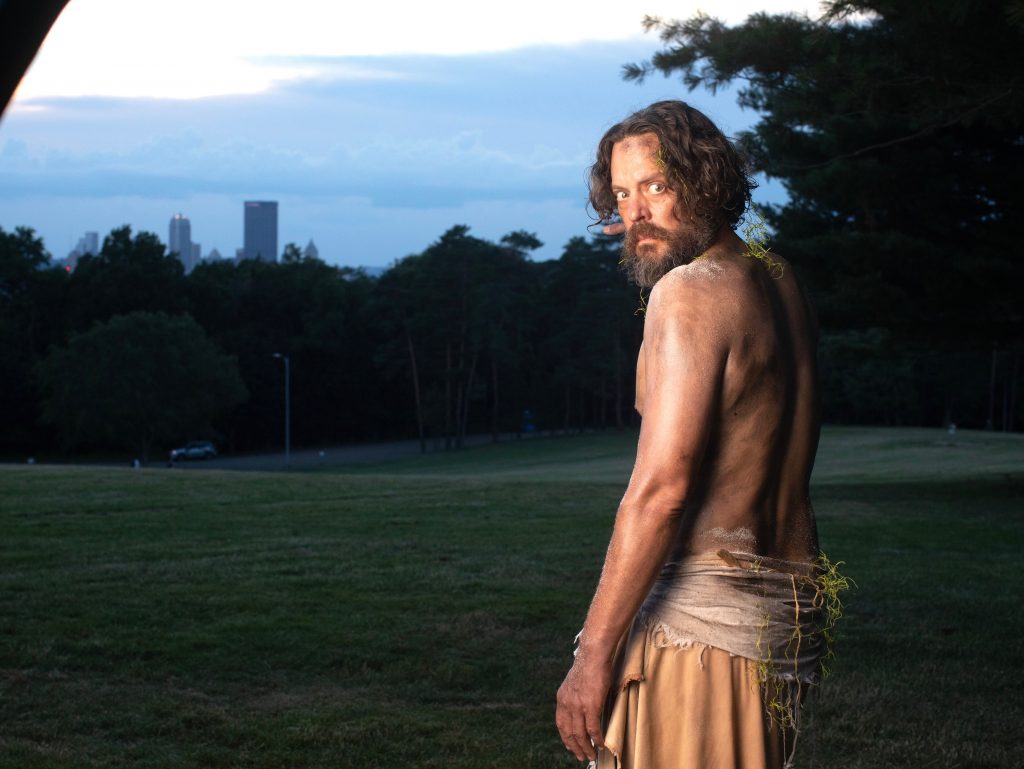 Weary Odysseus (Sam Turich) longs for Ithaca but will find his tale retold from an unconventional angle in Quantum’s ‘An Odyssey.’ The season-opening play is presented in Schenley Park above the faraway spires of Downtown. (photo: Jason Snyder)

2) An Odyssey is adapted from the Homeric epic by Jay Ball, which should provoke immediate interest. Ball is the playwright who, several years ago, scripted Quantum’s adaptation of the 1920s political satire Pantagleize. The results were hilarious and An Odyssey, likewise, contains humor. It also brings to the fore characters other than Odysseus—such as his wife Penelope, who waits patiently for the storm-tossed wanderer to make it home from the Trojan War, while fending off suitors attracted to both her person and her wealth. An Odyssey will be staged at the Schenley Park Ice Rink, sans ice of course, August 13 to September 5.  8 p.m. 10341 Overlook Dr. (next to Schenley Oval), Oakland.