1) “Come on feel the noise/Girls rock your boys/We’ll get wild, wild, wild!” is the raucous call to action in the Quiet Riot song “Cum on Feel the Noize.” The band rocked not only the girlz, but also the boyz in their 1983 hit that rose to No. 5 on the Single’s chart and No. 7 on the Rock chart. The Los Angeles, California band reportedly got their name when they misheard British rocker Rick Parfitt say he wanted to name a band Quite Right. The name has been good for Quiet Riot although there’s not much that’s quiet about them. The glam rock group generates a loud melodic sound based on talented guitar and drum play along with strong lead vocals. Their latest release in 2017’s Road Rage. 8 p.m. Jergel’s Rhythm Grille, 285 Northgate Dr., Warrendale. 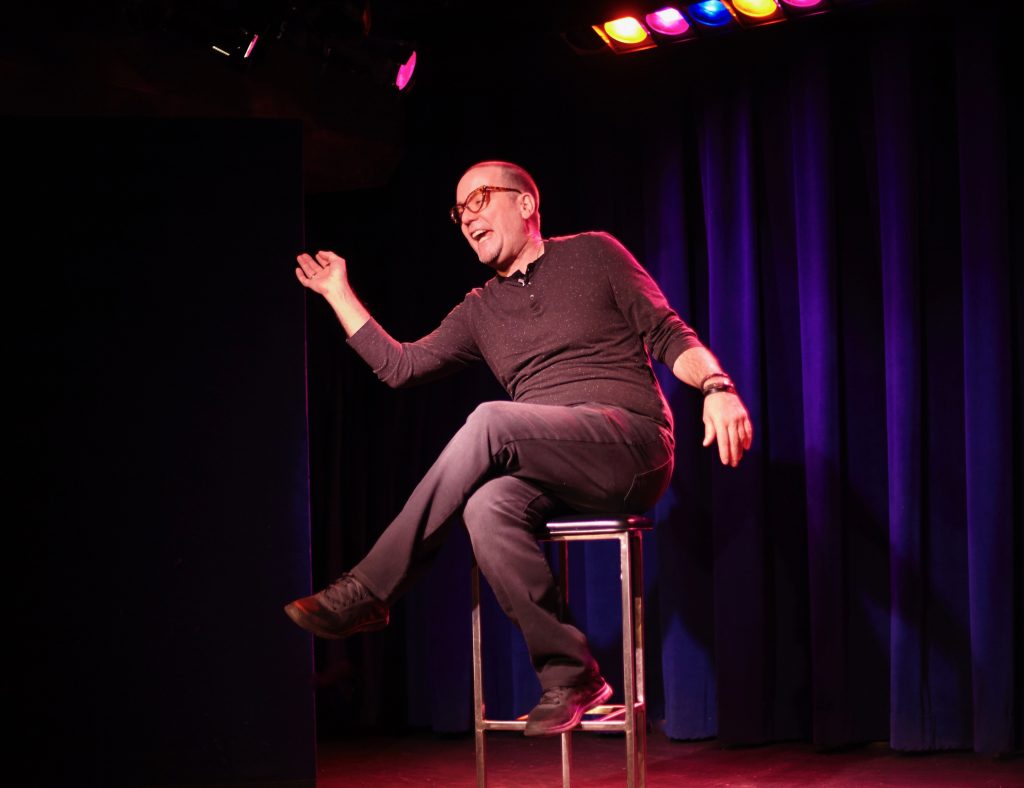 Don’t fall off that bar stool! Dan Ruth pushes the envelope in ‘A Life Behind Bars.’ (photo: Rolando Pellot)

2) A Life Behind Bars is not a prison drama. Theater artist Dan Ruth created this one-man play about his previous life tending bars and drinking in them. The real-life scenes that he re-enacts transpired over a couple of decades in New York City, where Ruth premiered the show in 2015, winning praise (and various awards) for both its dark-comic tales and how deftly he presents them. His subjects range from the surreal patrons he has served to the social evolution of Brooklyn, once an affordable haven in the pre-man-bun era and now Gentrification Central. In a sense, A Life Behind Bars is a panorama of New York life from the saloon perspective—but it’s also a story of altered consciousness gone wrong, as Ruth relates his own tainted love affair with intoxicating beverages. He’s been in recovery for a while and intends to show up sharp as a straight-edge razor when he performs A Life Behind Bars at Carnegie Stage. 8 p.m. Ends tomorrow. 25 W. Main St., Carnegie. (MV)

3) Ryan Hoffman and the Pioneers describe their sound as a “harken back to narrative songwriting, brought to life by modern synth folk arrangements.” To hear this intriguing musical description in action simply listen to songs such as “Underground” from their just released debut album, In the Alps. The band is composed of Ryan Hoffman (vocals, guitar), Amy Linette (vocals, sax, guitar), Brad Collins (guitar, bass. vocals), and Mike Smales (drums, vocals). They are opening tonight for another Pittsburgh indie-rock band Flashpoint Run. 8 p.m., Club Cafe, 56-58 S. 12th St., South Side.

4) DAPLINE! (dance/theater) by André M. Zachery and LaMont Hamilton. Feb. 1 only, 8 p.m., touring company at the August Wilson Center. Do you give daps? I.e., do you greet your pals with ritual handshakes, body-shakes, high/low fives, fist-bumps and/or et cetera?  Whatever the answer, you may wish to catch the Pittsburgh performance of Dapline! It’s a dance-and-theater piece in which six men explore intriguing variations of the dap, while acting out silent vignettes that suggest deeper social implications. Created by André M. Zachery of Brooklyn’s Renegade Performance Group and indie artist LaMont Hamilton, Dapline! has been well received in New York. Fans of the show give it two thumbs up—and then some. 8 p.m. August Wilson Center, 980 Liberty Ave., Cultural District. (MV)