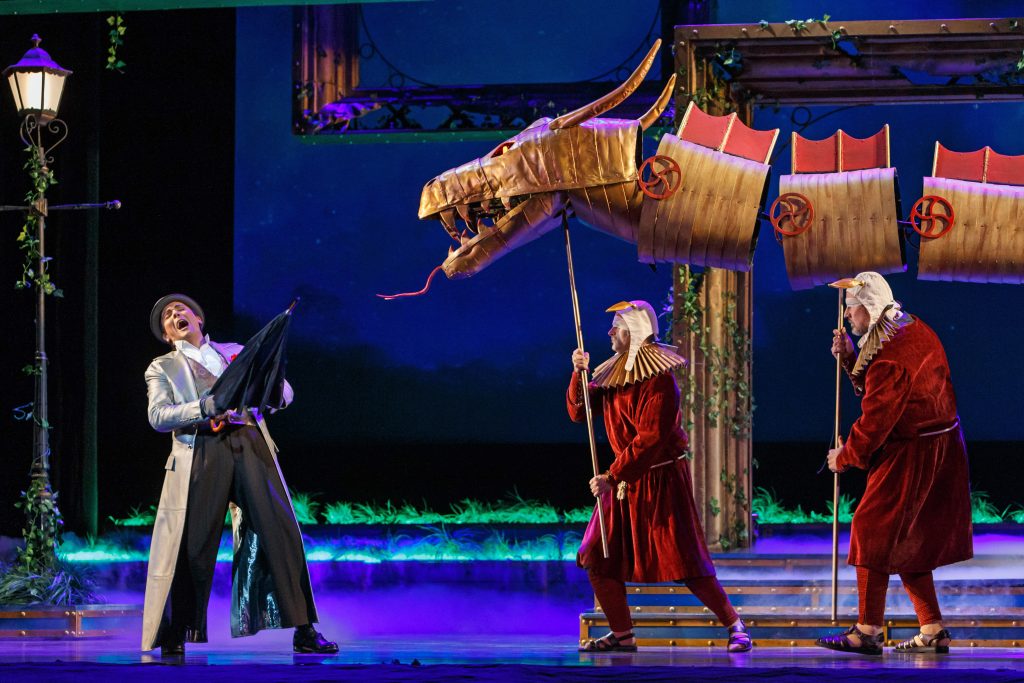 2) The Magic Flute is not your ordinary opera. Along with its bizarre story line and its enduring popularity, there is the fact that Mozart and librettist Emanual Schikaneder didn’t actually consider it an opera—at least not in the grand-opera style of the late 1700s. Like most Broadway musicals today, The Magic Flute combines spoken dialogue with the singing and dance. Technically it is a Singspiel (German for “singing game”), and to play the game a new way, Pittsburgh Opera presents The Magic Flute spoken and sung in English. The story remains an extreme exercise in allegorical fantasy: A prince wanders into an enchanted land where he meets a strange character calling himself a bird-catcher. Spirits appear, urging the two to rescue the daughter of the Queen of the Night. Said daughter is held captive in the domain of an evil wizard, but wait. The wizard turns out to be an enlightened sage. Villainy is indeed afoot but it’s an inside job. To accomplish the mission, the prince must undergo ordeals of fire and water. The flute of the title is a power object for changing sorrow to joy.

In case you wondered, yes, The Magic Flute has been made into a video game. But Pittsburgh Opera’s production gives you all the humor, drama, and brilliant Mozart music of the original. Tenor David Portillo is the prince and soprano Adelaide Boedecker plays the captive princess. The English libretto is projected above the stage in supertitles for super-clarity. Benedum Center, 237 7th St., Cultural District. (M.V.)

3) One of the nation’s foremost African-American dance companies comes to Pittsburgh for a mixed-repertory performance. Philadanco, a.k.a. Philadelphia Dance Company, was founded in 1970 by dancer Joan Myers Brown, who went on to become a leading advocate and organizer for bringing Black artists into the world of professional artistic dance—and who recently stepped back from active leadership of Philadanco at the age of 89. The company has performed worldwide. Known for its virtuosity in many forms of modern dance, Philadanco visits the August Wilson Cultural Center, 980 Liberty Ave., Cultural District. (M.V.)

4) Fans of the Descendants fantasy series are invited to the very real town of Midland, Pennsylvania to see a live musical adapted from the Disney TV movies. Disney’s Descendants: The Musical features fave characters Mal, Evie, Carlos, and Jay, along with songs that the initiated may know by heart. Lincoln Park Performing Arts Center, 1 Lincoln Park, Midland. (M.V.)