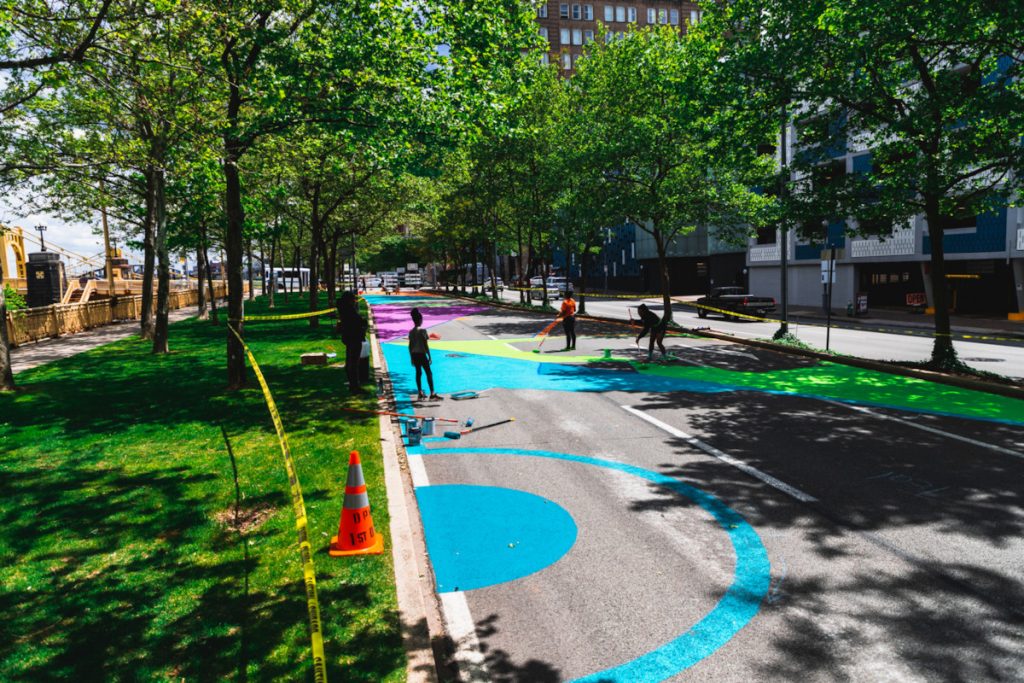 Many events for the Dollar Bank Three Rivers Arts Festival will be along the Allegheny River on the newly created Allegheny Overlook Pop-Up Park where you can see artist Janel Young’s ‘Pathway to Joy.’

1) The 10-day Dollar Bank Three Rivers Arts Festival is Pittsburgh’s largest and grandest summer celebration. After last year’s Festival had to go online-only, this year it returns as a “hybrid” affair—live and in person (with Covid precautions) for those wish to come, with some attractions also online. The ever-popular Artist Market features handmade arts, crafts, and wearables on sale in over 150 booths. An even larger selection, from more than 200 artists in all, will be viewable and buyable online.  Performing arts are headlined by six Mainstage Concerts in Point State Park, with acts including the renowned blues vocalist Shemekia Copeland, travelin’ singer-songwriter Rayland Baxter, and lively pop-rocker Caroline Rose. A varied lineup of Pittsburgh-based talent will perform at the Allegheny Overlook Pop-Up Park, alongside the river of that name. Live performances are free at either venue, and there’s a separate slate of performers coming together for the 24/7 Virtual Stage. Last but not least, juried and invited visual arts will be displayed at various Cultural Trust galleries in the Cultural District. A number of events and attractions were still in the planning stages as opening day approached, so see the Festival website for latest updates. The situation is fluid … but it’s good! Singer-songwriter Celisse is the mainstage act tonight (7:30 p.m.) (M.V.) 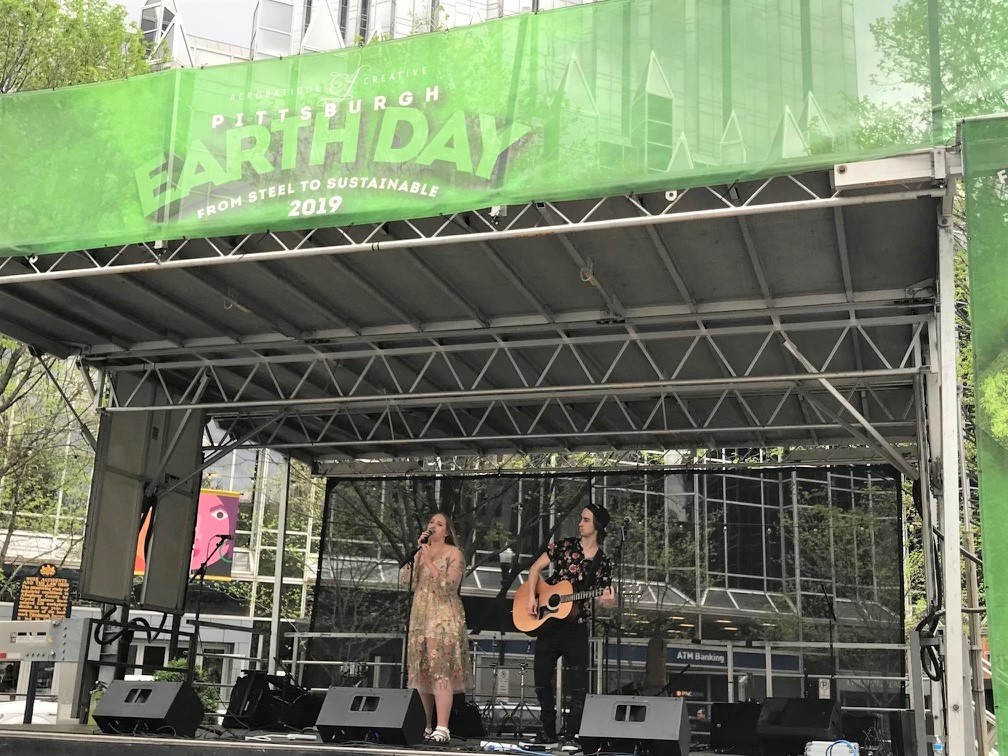 The Go Green Festival in Market Square will feature a variety of performers, environmental exhibits, and activities the weekend of June 4 – 5.

2) Pittsburgh Earth Day is having a Go Green weekend full of events to celebrate World Environment Day. It encompasses free outdoor concerts and a community festival at Market Square. The Festival kicks off Friday, June 4 and runs through Saturday, June 5, with concerts starting hourly from noon to 6 p.m. each day. In addition to the concerts, there will be activity booths with local businesses sharing their sustainable mission in the city of Pittsburgh. Other areas of focus are on alternative and electric transportation, wellness, and an opportunity to get the kids involved with The Growing Up Green corner. Concert highlights include Scott Blasey, Jeff Jimerson, and Bindley Hardware Company on Friday; and Zoob, The Nox Boys, and the Clinton Clegg Trio on Saturday. (Market Square, Downtown.) On Friday, June 4 the Sixth Annual Sustainable Business Breakfast will be held at the Fairmont Pittsburgh hotel. Discussion will be moderated by City of Pittsburgh Chief Resilience Officer, Grant Ervin and Chief Corporate Relations Officer for the Allegheny Conference, Bill Flanagan. Tickets are free, but space is limited and registration is required. 510 Market St., Downtown. (R.H.)

George Westinghouse (l., Billy Mason) and Thomas Edison (Daniel Krell) face off against one another over the future method of electrification in Qauntum’s ‘The Current Wars.’ (photo: Heather Mull)

3) Musical theater deals with a wide range of subjects these days, so maybe we shouldn’t be surprised to see a musical about electrical infrastructure. Quantum Theatre returns to live performance with the world premiere of The Current War. It’s a fictionalized recap of the late-1800s struggle to determine whether the future American power grid would use George Westinghouse’s alternating current technology or Thomas Edison’s direct current. The writer-composer is Pittsburgh native Michael Mitnick. Previously, he adapted the script for a 2017 movie that featured Benedict Cumberbach as Edison, but the film was a straight historical drama with nary a song or dance. The Quantum production is the first to use Mitnick’s stage script along with his lyrics and score. All dates for The Current War are sold out, but you can watch it online. A video recording of the show is available June 12 – 27 and a $20 virtual ticket gives you on-demand viewing for 72 hours. Or, to get on a live-show waitlist: Go to Quantum’s webpage for the musical, click a performance you’d like to attend, and then click the waitlist link for that date.

The Current War is being staged in Westinghouse Park, where the inventor’s family once had their Pittsburgh home. The cast includes Billy Mason as George Westinghouse, Melessie Clark as his wife Marguerite, and Daniel Krell as Thomas Edison. Tomé Cousin directs and Douglas Levine is music director. 8 p.m. 7501 Thomas Blvd., Point Breeze. (M.V.)

4) Pittsburgh Pride Revolution weekend starts today and will have its first annual march, mini-fest, and virtual weekend. Today’s schedule has several events including an in-person Pride Drag Dinner Soiree and a virtual production of “Broadcasts from the End of the World” with the Comic Misfits. Saturday has the Pride parade marching downtown and a min-music fest afterwards at Allegheny Commons Park on the North Side, an art show, sing-along, and several films. Sunday’s feature includes a second min-fest at Trace Brewing in Bloomfield. Several after parties will also be occurring during the weekend. For more information visit the Pittsburgh Pride website.