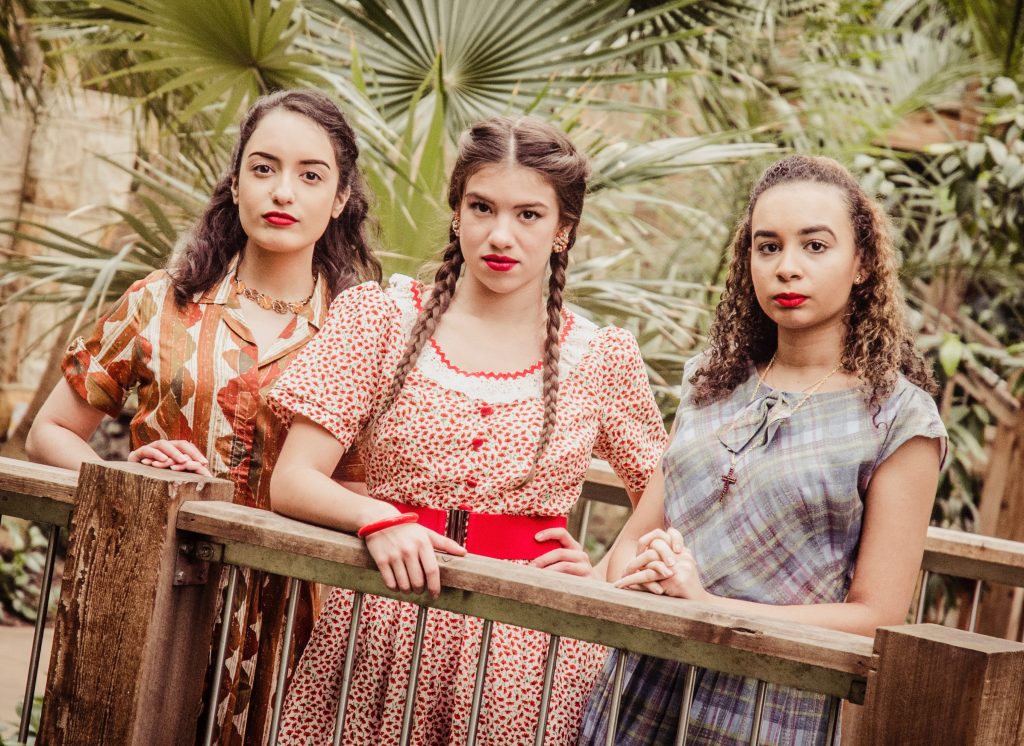 ‘In the Time of the Butterflies’ is a recent stage adaptation, by Caridad Svich, of the true-life novel about women who dared to oppose a dictatorial regime in the Dominican Republic. It’s at Prime Stage Theatre, and playing the trio who called themselves ‘the butterflies’ are (L to R) Evelyn Hernandez, Frances Tirado, and Krystal Rivera. (photo: Laura Slovesko)

1) Rafael Trujillo ruled the Dominican Republic for over 30 years, driving the country to modernize but also driving it into the depths of a brutal dictatorship. He tolerated no rivals or critics, and anyone he deemed troublesome was jailed or killed. In the Time of the Butterflies, performed by Pittsburgh’s Prime Stage Theatre, dramatizes the story of four women who opposed the Trujillo regime. The Mirabal sisters were bright, energetic young women from a middle-class family. They knew Trujillo; one sister even had the unpleasant honor of rejecting the great man’s advances. But what alarmed the Mirabals far more was his state-sponsored reign of terror. Three of the sisters grew active in organizing against him. Eventually, in November of 1960, they were murdered. Outrage over the act helped to provide the final nails for the dictator’s coffin. Six months later, Trujillo himself was assassinated and the regime fell. In the Time of the Butterflies was adapted for the stage by American writer Caridad Svich from Julia Alvarez’s novel. 2:30  p.m. Post show talk with Ms. Minou Tavarez Mirabal, daughter of a Mirabal sister, moderated by Sally Wiggin. Performances continue through March 17.At the New Hazlett Theater, 6 Allegheny Square East, North Side. (MV)

2) If you caught last year’s stirring NBC-TV production of Jesus Christ Superstar, with John Legend in the title role, you may wish to know that the show’s choreographer is bringing a show of her own to Pittsburgh. She’s Camille A. Brown and her feature-length narrative dance piece is called ink. Like much of her work, it deals with themes related to African-American life. Brown’s latest project on Broadway was the movement design for Tarell McCraney’s Choir Boy, set in a private school for young black men, and you can see her mark in the results. But ink goes deeper. Created for her own company, Camille A. Brown & Dancers, it explores how African identity has evolved and is expressed in America. The show has seven segments, with subjects ranging from an ancient Yoruba ritual to modern black city culture; the dance and music vary accordingly. Brown writes that the segments “represent super powers of spirituality, history and heritage, the celebration of the Black female body, Black love, brotherhood, exhaustion, and community.” 8 p.m. Today and tomorrow only. Pittsburgh Dance Council and the August Wilson Center present ink at 980 Liberty Ave., Cultural District. (MV)

3) The Mythburgh series is a periodic getting-together of local theater artists who turn strange Pittsburgh stories into short performance pieces. The stories can be serious, illogical, true, apocryphal, or otherwise; the unifying theme is that they have a mythical, urban-legend quality. Presented by 12 Peers Theater, Mythburgh events occur twice around springtime and twice in the fall. Mythburgh Season 3 kicks off March 10 at 8 p.m. at Brillobox, 4104 Penn Ave., Bloomfield. 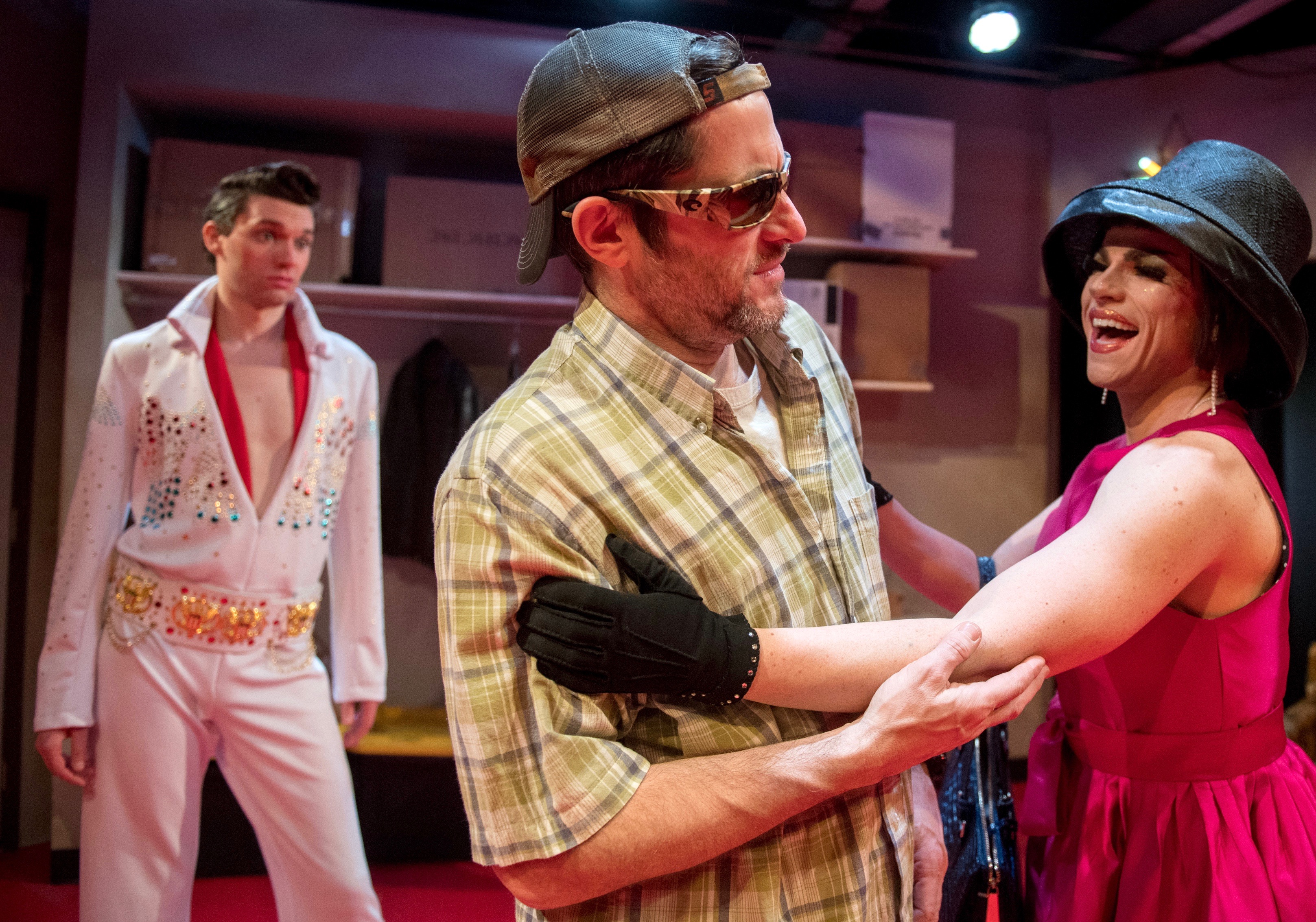 Elvis is bummed when his boss embraces a new star in ‘The Legend of Georgia McBride.’ Actors for barebones productions are (L to R) Andrew Swackhamer, David Conrad, and Shua Potter. (photo from barebones)

4) Playwright Matthew Lopez is known for sensitive, nuanced treatments of LGBTQ and racial/ethnic themes. There are times, however, when one must say “Screw the nuance, let’s go for laughs,” and therefore Lopez wrote The Legend of Georgia McBride. It’s set in a seedy bar in the Florida panhandle. The bar’s Elvis impersonator is failing to draw crowds, so the owner replaces him with a couple of drag queens. When one of them can’t make a gig, the former fake Elvis is pressed into action, and presto—a legend is born. The Legend of Georgia McBride made its New York debut in 2015. A critic for the Times found it more fun than “RuPaul’s Drag Race,” which is high praise, if one can believe an allegedly failing newspaper. Pittsburgh theater fans can see the theory tested. Barebones productions presents The Legend of Georgia McBride with actors Andrew Swackhamer, David Conrad, Shua Potter, Justin Lonesome, and Sara Williams. 3 p.m. Continues through March 17. In the barebones black box at 1211 Braddock Ave., Braddock. (MV)