1) Yes will be performing as part of The Royal Affair at Stage AE with other Brit rockers: Asia, John Lodge of The Moody Blues, and Carl Palmer’s ELP Legacy. Yes started out in 1968 performing original songs and reworked covers. Their first two albums were mostly uneventful, and they were even on the verge of being dropped by their record label. Then the band made a dramatic turn into experimental (progressive) rock. A few personnel moves were made, and guitarist Steve Howe joined the main founding members Jon Anderson and Chris Squire. Their fortunes also turned as their next album, The Yes Album, released in ’71, was a breakthrough success. The album reached no. 4 in the UK and no. 40 on the U.S. charts. “Starship Trooper” and “Yours Is No Disgrace” were top songs from the release. The band is known as one of the progressive rock pioneers. The members’ innovative vocal harmonies, guitars, rhythm section, and keyboards left a mark on the music industry despite breakups and reunions. There are currently two Yes outfits: Yes and Yes Featuring Jon Anderson, Trevor Rabin, Rick Wakeman. Yes is led by longtime band members Howe and Alan White (drums, percussion). The group’s last studio album was 2014’s Heaven & Earth. Yes was finally inducted into the Rock and Roll Hall of Fame in April 2017. (RH)

Asia started as a progressive rock band in London, England in 1981. The supergroup’s original lineup included lead vocalist and bassist John Wetton of King Crimson, guitarist Steve Howe of Yes, keyboardist Geoff Downes of Yes, and drummer Carl Palmer of Emerson, Lake & Palmer. Their debut album, Asia, was released in 1982 and reached No. 1 on the album charts in many countries. The group disbanded in 1986 and reformed with an altered lineup in 1989, which still includes Downes and Palmer. (RH)

Also performing at The Royal Affair is John Lodge, bass guitarist, vocalist, and songwriter of the noted English rock group the Moody Blues. The Rock and Roll Hall of Fame inducted them in 2018 and they are still performing. The group is best known for their hit songs “Nights in White Satin,” “Tuesday Afternoon,” and “Your Wildest Dreams.” Lodge will be performing many Moody Blues’ tunes as part of the concert. (RH)

Carl Palmer was a member of the pioneering progressive rock band Emerson, Lake & Palmer. Spawned in the 1970s, ELP is best remembered today for an eerily mellow number, “Lucky Man.” But the boys could also do thunder and lightning—especially Palmer—and he has kept doing it with various acts, including the band Asia. Palmer, noted as one of the best rock drummers of all time, is touring with his group ELP Legacy. Guest vocalist is Arthur Brown. Doors open 5:30 p.m. 400 North Shore Dr., North Shore. (MV) 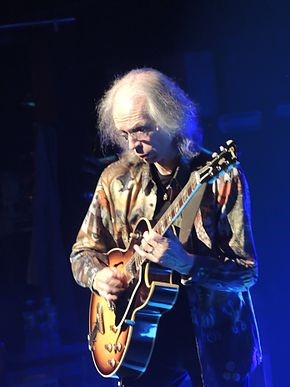 Steve Howe playing his Gibson ES-175 guitar in 2013 at the Beacon Theater. (photo: SolarScott and Wikipedia.)

2) Robyn Hitchcock has made his mark as a singer-songwriter with his own look and style. Elements of that style include lyrics that convey surreal imagery, eerie/spacey guitar work, and a jaunty/cynical mood that says this is serious, but I’m having fun with it. Hitchcock combines the elements in various ways—“Raymond and the Wires” doesn’t sound a lot like “I Want To Tell You about What I Want”—yet both are from the same album, 2017’s self-titled LP, which also includes a track called “Virginia Woolf.” Hitchcock broke onto the scene in the 1970s in his native England as leader of The Soft Boys. He’s been performing and recording solo and/or with various other configurations of musicians since 1981. 7 p.m. Club Cafe. Sold Out. 56 -58 S. 12th St., South Side. (MV)

3) Before he wrote Hamilton, Lin-Manuel Miranda teamed with playwright Quiara Alegria Hudes to create In the Heights, a pretty fair show in its own right—it won the 2008 Tony Award for Best Musical. The setting is New York’s Washington Heights, a center for Dominican and other Spanish-speaking immigrants. Multiple story lines follow a group of young folks striving to move up in the world. The music is a high-energy blend of Latin beats and hip-hop. A Pittsburgh-area production of In the Heights is happening at the Lincoln Park Performing Arts Center. 7:30 p.m. Performances continue through June 23. 1 Lincoln Park, Midland. (MV)

4) Noted hip hop artist and Pittsburgh native, Tjuan Benefactor, will be performing live in concert this evening at Mellon Square Park from 6 to 7 p.m. Also on the bill are Bonez Da Loc, Jay Fifth, Boulders, and Nahlidge Bone. They are performing as part of Make Music Day which encourages musical performances on the summer solstice. Sixth Ave., Downtown.