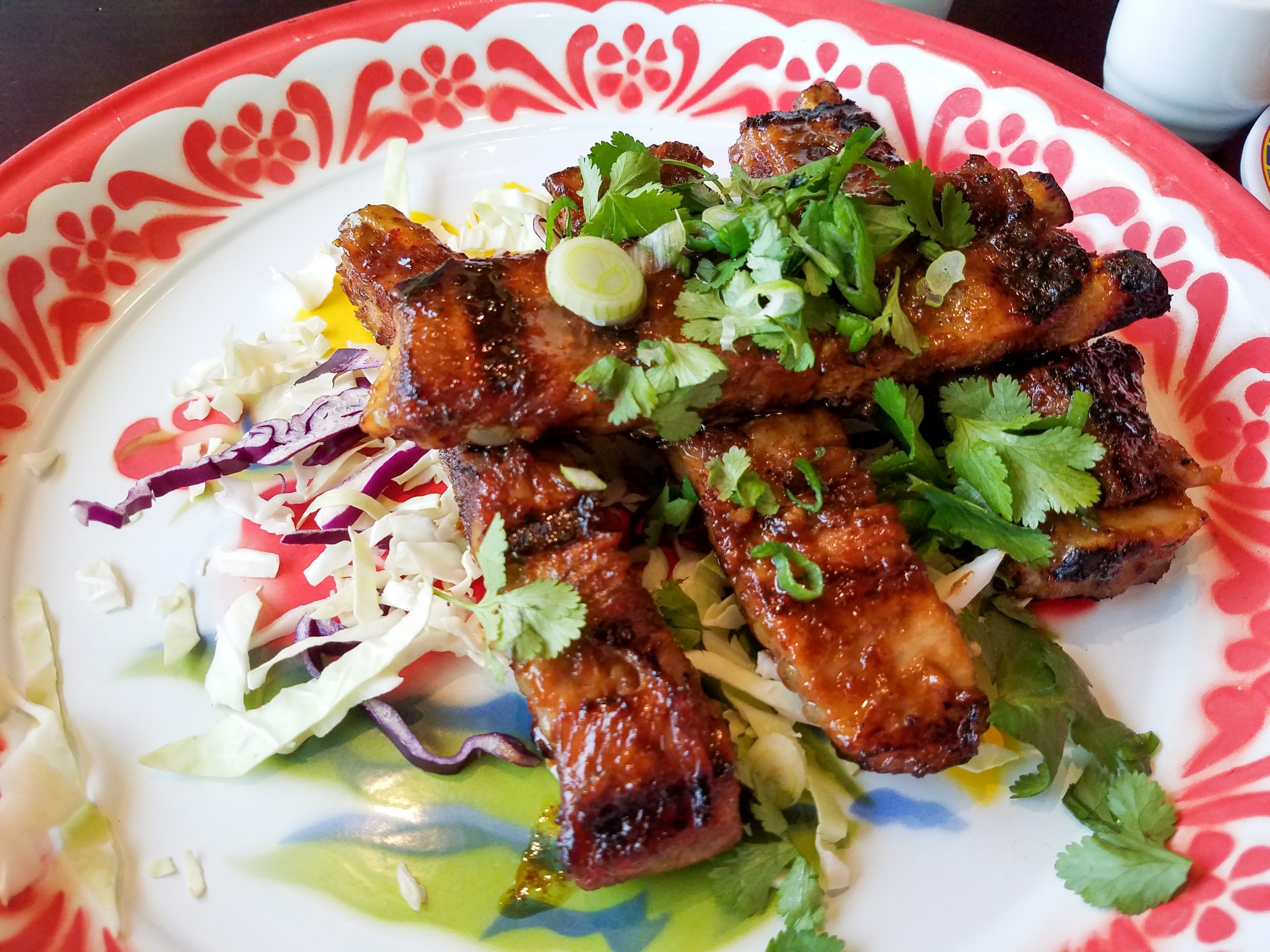 Note: This review was being readied to go when the March lockdown occurred. We’d been holding it until restaurants could reopen more fully. The menu is the same as when visited several months back.

Squirrel Hill’s venerable Bangkok Balcony has been reconceptualized into Kiin Lao & Thai Eatery. The owners, Chef Norraset (Nor) Nareedokmai and his wife Rujira, closed Bangkok Balcony in September 2019 to remodel, redecorate, and develop the new restaurant’s menu. Its dual-country offerings reflect the fact that Thailand (especially the Isan section in the Northeast) and Laos share a long common border. Chef Seng Luangrath of Washington, D.C., and one of the founders of the Lao food movement in the United States, advised Kiin on the Laotian part of the menu.

I was introduced to the restaurant by my friend Gary, who works for US Foods, one of the food suppliers to Kiin. Gary invited me to join him and several members of his team at the grand opening in late November.

Kiin (pronounced “keen”) means “eat” in both Thai and Laotian, so the name conveys the idea of eating together. The restaurant has beautiful, lively murals of Laotian/Thai street scenes on its interior walls including a map of Laos and Thailand. There’s even a small bamboo-and-leaf-roof hut in the rear of the restaurant which is a server station. For the grand opening several different food stations were set up throughout Kiin’s dining room. Offerings at the festive event included pad Thai, red curry and rice, siin lod, and sai oua. 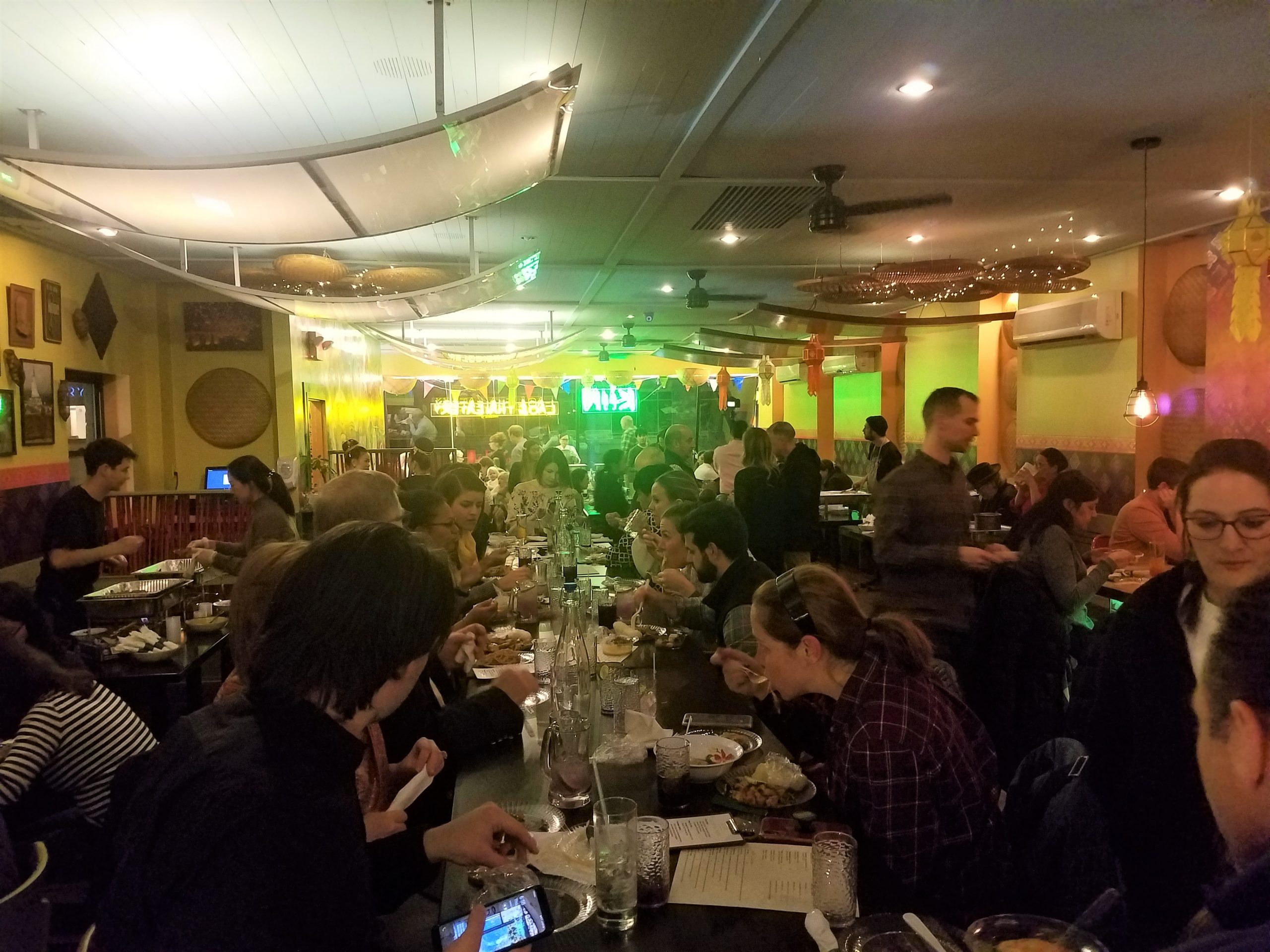 The grand opening celebration was lively with several different food tastings and performances by Thai dancers.

Other highlights of the evening were lovely Thai woman dancers in traditional attire performing dances of their culture, everyone in the restaurant being served bou loy (a creamy liquid dessert made with coconut milk and pumpkin balls), and the good luck toast to the new restaurant. It was a fun and delicious evening.

After the grand opening, I thought, with Kiin being the only restaurant with a large selection of Laotian food in Pittsburgh that I know of, further exploration might be interesting for myself and our audience.

I next visited Kiin in mid-January with a large group of friends that included Terri, Gary, and Guy.  I was excited to start exploring more of Kiin’s menu. The menu is divided into Laotian and Thai sections. From the Thai section I chose the tamarind spare ribs appetizer, and reprised my tasting of the Laotian appetizers siin lod and sai oua that I had tried at the grand opening.

Wow, the tamarind spare ribs were a big winner with me. An order is four meaty ribs with a tangy sweet bbq sauce made in-house which features tamarind and pineapple. I licked each of my fingers so as not to lose any opportunity to taste the sensational bbq sauce. It is one of the best exotic bbq sauces I’ve had.

The siin lod—sun dried beef, ginger, black pepper—were long somewhat rectangular meat strips. The sai oua were round slices of a spicy pork sausage, similar to a chorizo, served with lemongrass, fresh dill, ginger, and peanuts. This was accompanied by a fermented soybean-pineapple sauce. It was a spicy and flavorful small-plate offering. I paired my app-a-palooza with one of Kiin’s craft cocktails, Pandan-demic (the drink’s name has lost some of its allure since my visit due to obvious reasons). It was composed of Wild Turkey Rye, pandan leaf, and simple syrup with Wigle’s Pomander Orange Bitters. The drink was very flavorful, somewhat reminiscent of an old fashioned.

I shared the apps with my friends and Guy gave me one of his Lao curry puffs, which reminded me somewhat of an Indian samosa. Inside were potato, onion, and yellow curry powder. The puffs were served with a cucumber sauce. The service was a little slow on the busy Friday night we visited. The manager came over to see how everything was near the end of our meal and we all replied that everything was very good.

Kiin features a bar of approximately 20 seats and a decor that has a French farmhouse feel to it. Offerings include a selection of domestic and imported wines by the glass and bottled beers. Thai beers—Chang Lager and Singha Lager—are on the list too. A selection of nine craft cocktails is featured. There are also several interesting saki selections. The bar has a happy hour Monday through Friday with specials from 4 to 6:30 p.m. And if you’re not interested in an alcoholic drink, Kiin offers a selection of sodas, sparkling water, teas, iced tea, iced coffee, mango juice, and coconut juice.

My next trip to Kiin was in late February for lunch with Mike, a business associate and friend. On this trip I was looking forward to trying a Laotian main dish. Our server was Ghung, who, when I mentioned I was there for the grand opening, said that she was one of the Thai dancers that night. I asked her for a few recommendations, one of which was the Laotian Mok. I ordered the Mok and had to get another order of the tantalizing tamarind ribs. Mike ordered shrimp pad Thai and we split a small carafe of Moonstone Asian pear sake. 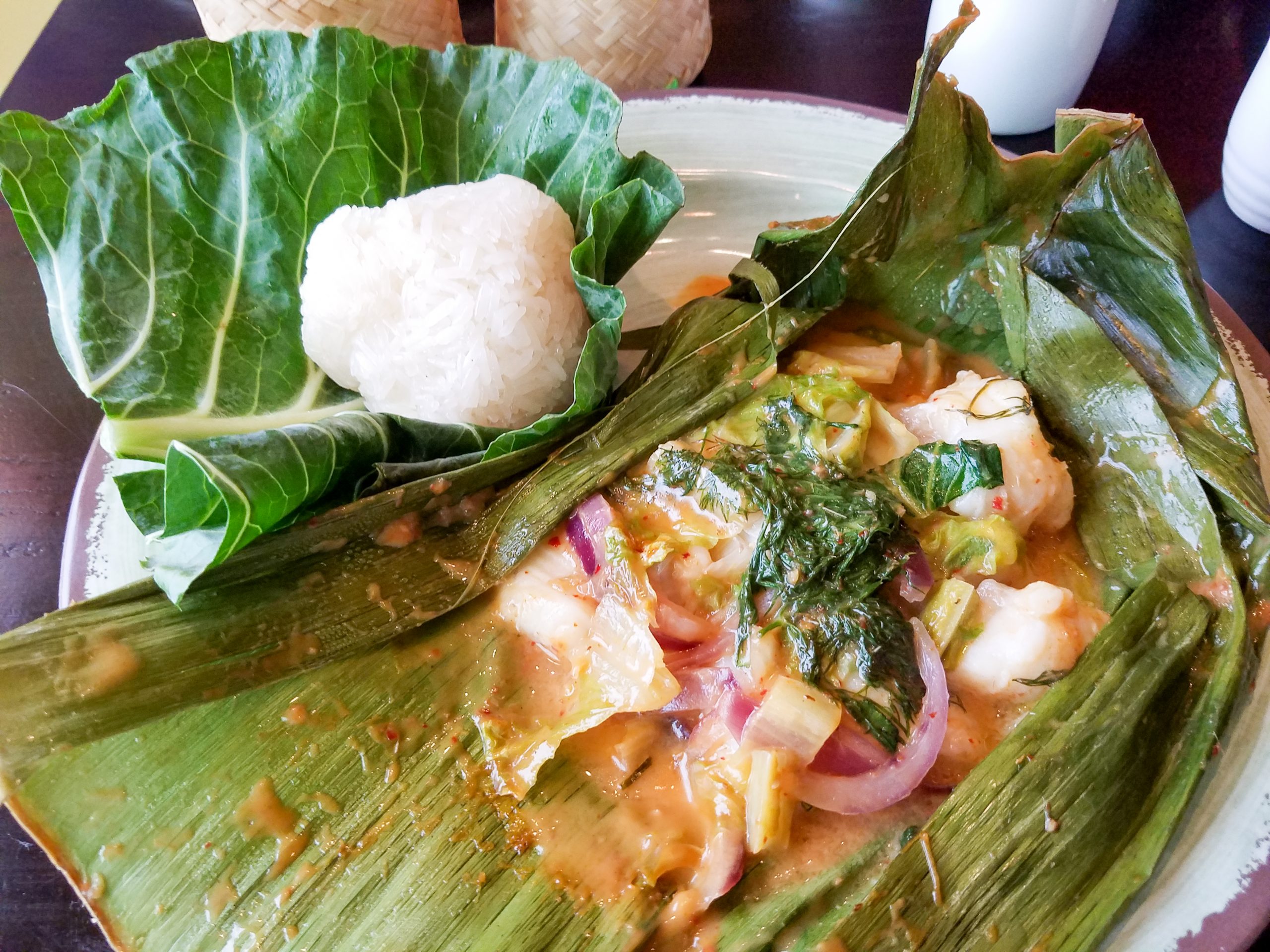 The Mok comes with a choice of fish (catfish), tofu, or salmon, steamed in a banana leaf with red curry, coconut, dill, red onion, and scallions and then served with cucumber slices and sticky rice. The rice is tucked into a small leaf within a basket. The catfish was moist and delicious, having absorbed many flavors of the accompanying ingredients and spices in the banana leaf, and providing a deep, intensely pleasant flavor profile. However, it would have been even better to have a few more chunks of fish in the serving.

The serving size of Mike’s shrimp pad Thai, on the other hand, was very large—a good-looking mound on a dinner plate. It contained five medium sized shrimp and all the classic ingredients of a pad Thai: rice noodles, chopped peanuts, scrambled egg, scallions, bean sprouts, and spices. At Kiin you can order it with no spiciness (zero) or on their spiciness scale with 4 being the lowest and ending at 10. Mike ordered it level 4. He gave me a helping and it had a good level of spiciness at the lower end of the scale. I wonder if 10 is equal to an atomic wing sauce. The pear sake was light and refreshing with pleasant pear notes. 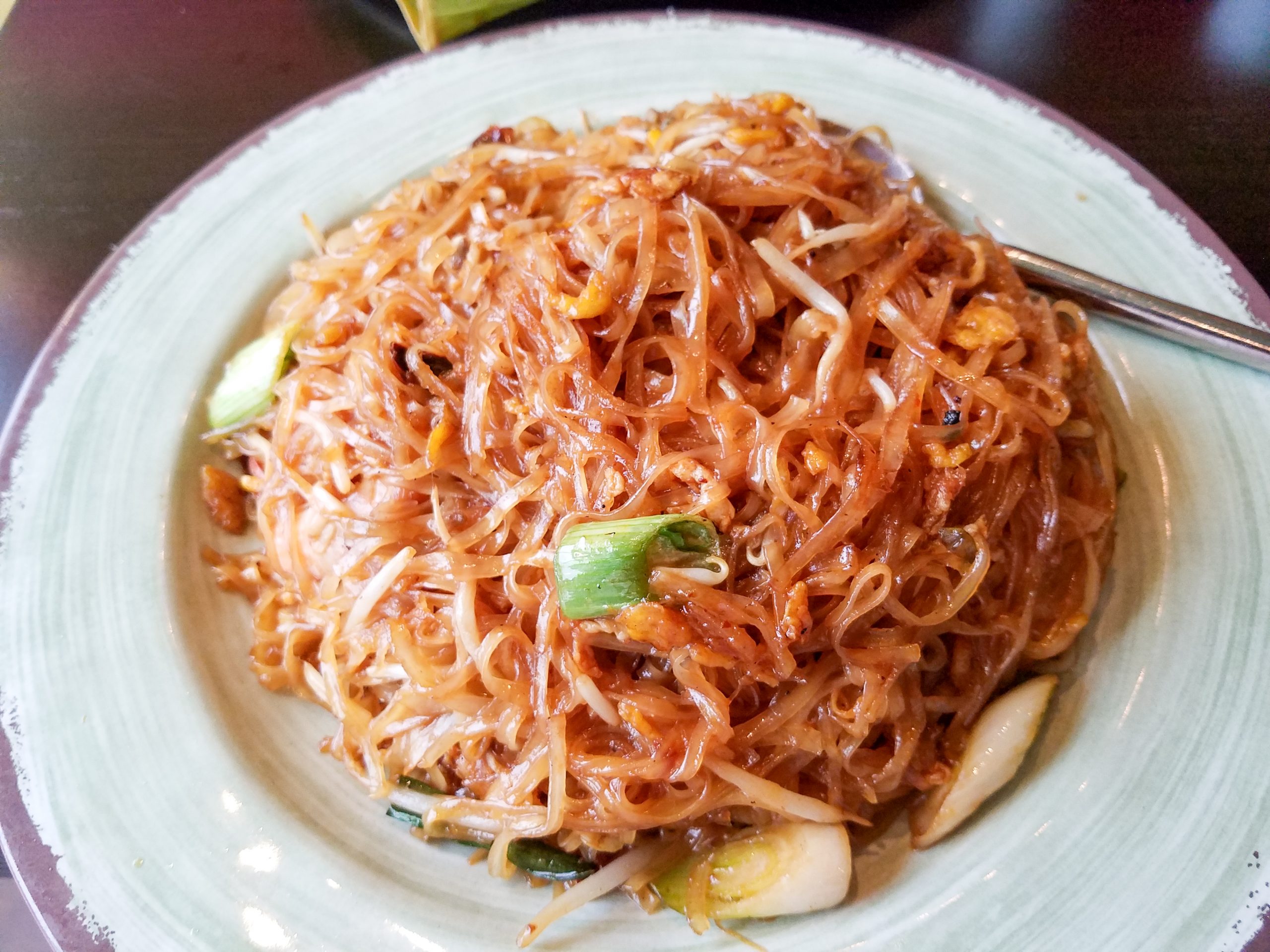 We both had the bou loy, the hot coconut dessert soup with pumpkin balls, which I had enjoyed at the grand opening. It is very sweet and the chewy, yet soft, consistency of the balls is an interesting texture, adding to the experience of the treat. Mike said it was the best dessert he had had in awhile.

Kiin gives interesting culinary insights into the foods of Thailand and Laos and is a sister restaurant to The Silk Elephant, also located in Squirrel Hill. The lunch and dinner menu is the same with starters priced between five and twelve dollars; mains range from twelve to sixteen dollars.