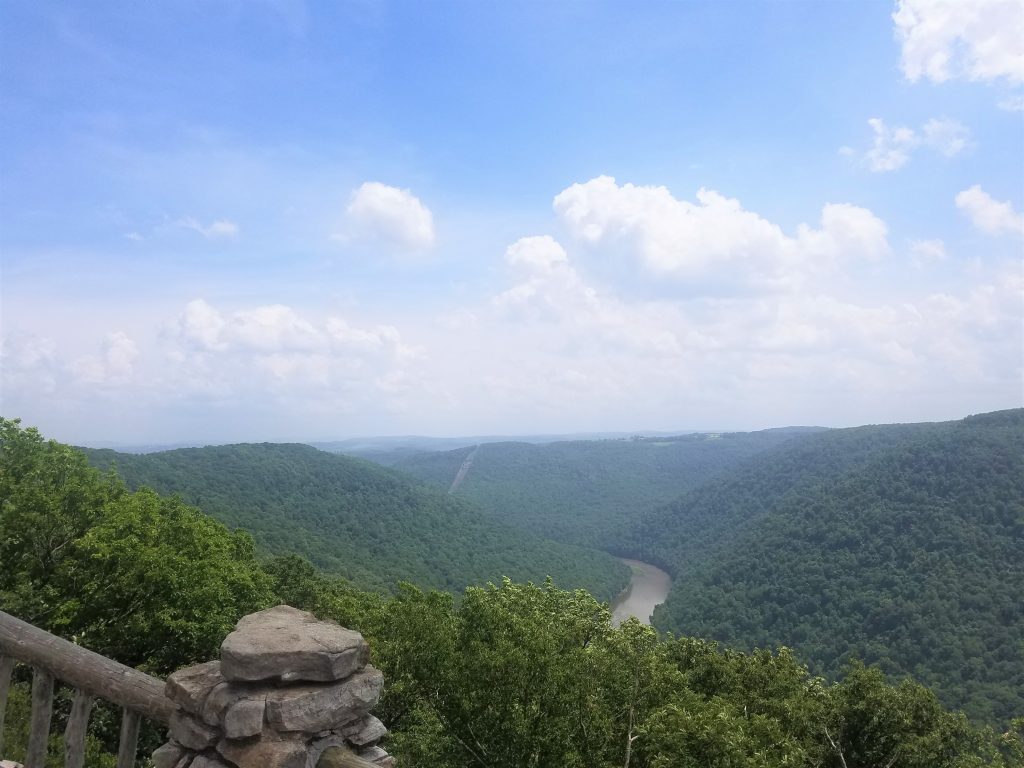 Coopers Rock Overlook offers a beautiful view deep into the heart of the Cheat River Canyon.

Coopers Rock State Forest is situated on a mountain approximately 13 miles east of Morgantown, West Virginia. It is a series of sandstone cliff formations that overlooks the Cheat River Gorge. The park’s namesake, according to legend, was a fugitive who took refuge near what is now the Coopers Rock overlook. A cooper by trade, he continued to make and sell barrels from his mountain hideout. The forest was also the site of the first steam-powered blast furnace in western Virginia—the Henry Clay Blast Furnace. Its remains can still be seen. Many park buildings and structures were built during the Great Depression by the Civilian Conservation Corps. 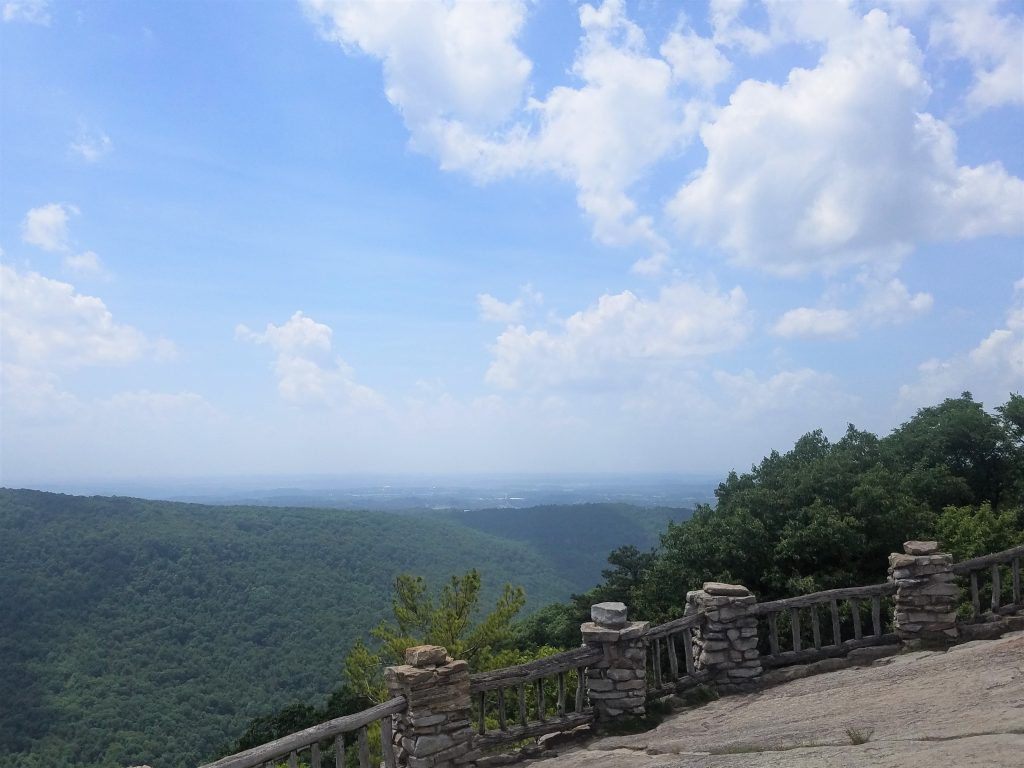 The mountains give way to rolling hills and towns to the right of Coopers Rock.

Whatever your favorite outdoor recreational activity is, Coopers Rock State Forest has almost all of them covered including hiking, biking, camping, whitewater rafting, historical sites, fishing, rock climbing, bouldering, ATV riding, hunting, cross country skiing and more. There’s also a wonderful trading post near the overlook that has traditional souvenirs like food, hats and t-shirts, but also intriguing additional items like rock specimens and products made or crafted in West Virginia. 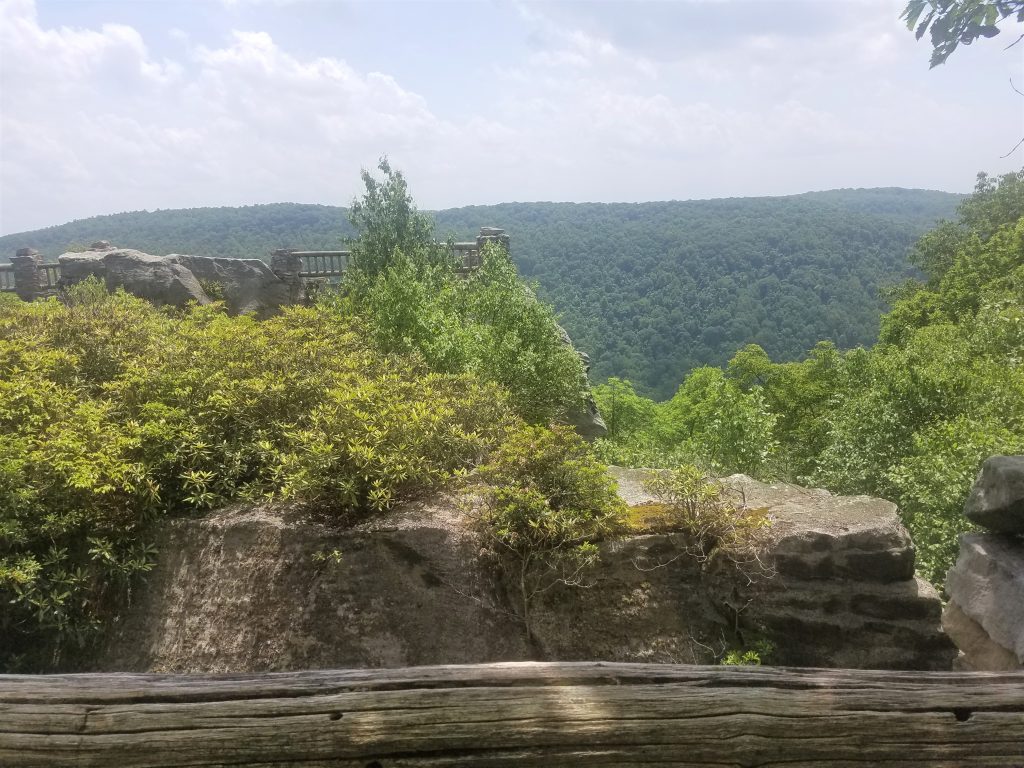 A view of the overlook from a trail near the rim.

When traveling to Morgantown for a business lunch, if I don’t have time to go for a hike deeper into West Virginia, but still want some inspiring greenery I will go for a hike at Coopers Rock. I went there during the summer recently. It was a ninety-some degree day with high humidity. There was not much relief from the heat high on the mountain. I had already had lunch at Von Blaze and done a little walking around Downtown Morgantown so I chose to do just a short hike on the top of the mountain around Coopers Rock overlook. I went out on to the top of Coopers Rock, accessed via a short elevated walkway. There you can see the Cheat River flowing far below and other mountains and a farway plain. The view is truly spectacular. After walking to the overlook and a short hike on trails around that area,  I decided to chill out for a little bit at a picnic table under a grove of tall trees. There was a heavenly breeze blowing. I embraced the quiet and the beauty of nature. 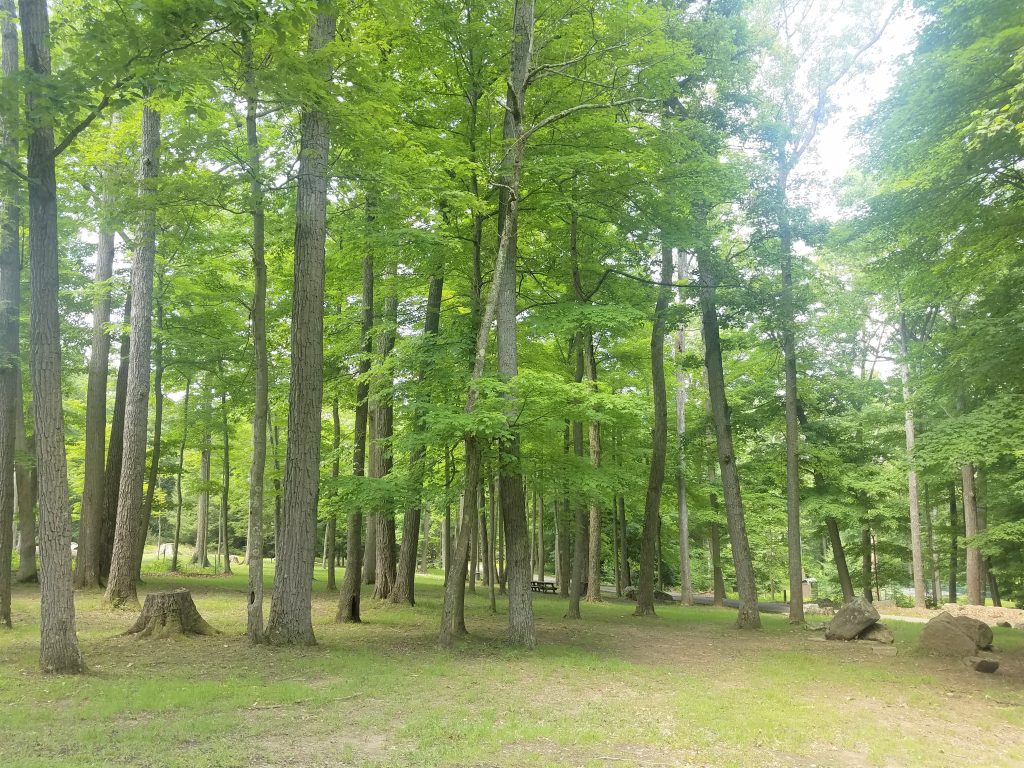 There’s a gorgeous grove of trees and a few picnic tables near the trading post.

On a previous hike several years ago at Coopers Rock I had set off from the overlook on the Underlook Trail and wound around and down to the foot of Coopers Rock, about 100 feet below the rock formation. There are many other interesting rock formations to see. I was also on Rock City and Rattlesnake Trails for a bit of my hike. There’s a series of trails of various distances and different difficulties to satisfy whatever type of hike one’s looking for. Many of the trails originate near the trading post. Coopers Rock State Forest is also gorgeous to see in the fall with the changing of the leaves and the fall season. The road to the overlook is closed during winter months. Coopers Rock State Forest can be accessed via I-68 east of Morgantown.