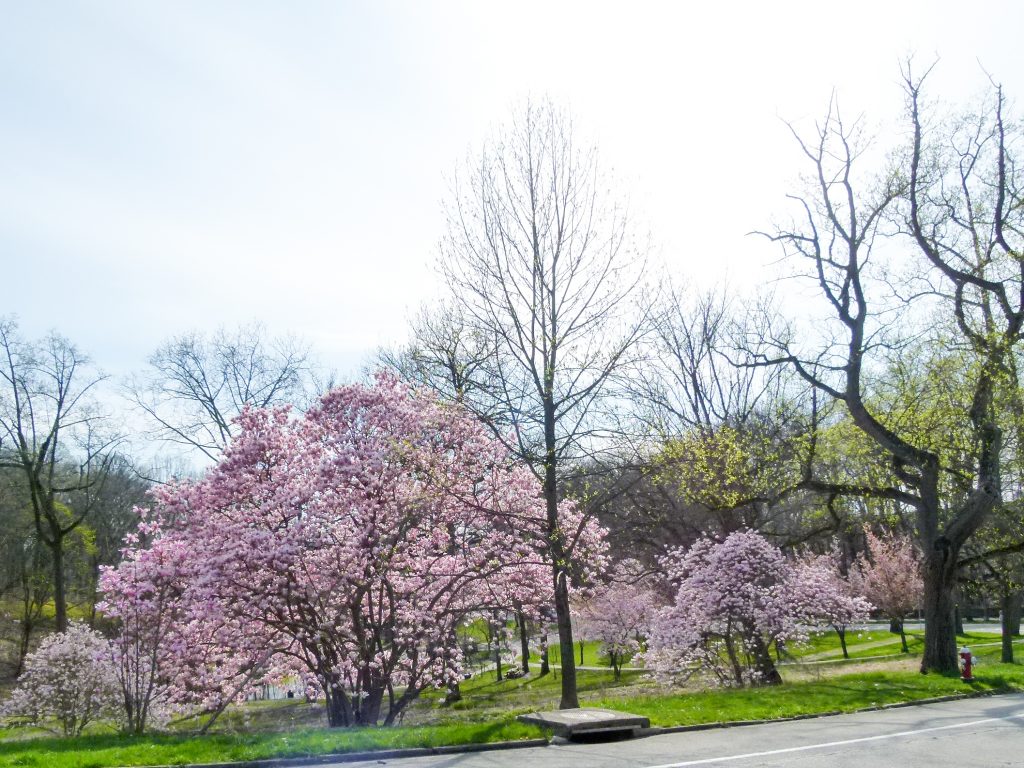 I was driving on Schenley Drive in Schenley Park a couple of weeks ago, when I encountered a beautiful sight—many just blooming cherry blossom trees on the grounds around the Westinghouse Memorial and lily pond. I thought to myself, I should go back sometime soon and take some photos. So this past Monday I went back.

My first stop was the lily pond which sits in front of the memorial. I didn’t see any frogs, but there were two ducks. One was a splendidly colored male and the other a female. The male paddled around the pond and sunned himself on a rock outcropping before joining the female in a bobbing move to hunt for food, which they did with their heads underwater and their tails straight up in the air (see the video below).

There are a few very nice marble benches that ring the lily pond, perfect for quiet contemplation (and duck watching). The Westinghouse Memorial is a bronze monument to the famed Pittsburgh inventor George Westinghouse. Westinghouse had an amazing life. He fought for the Union in the Civil War, then became a world-renowned inventor and entrepreneur. His development of air brakes for trains made railway transportation safer and faster, and he pioneered the use of AC (alternating current) for electrical power generation. During his career he formed three major companies: Westinghouse Air Brake, Union Switch & Signal, and Westinghouse Electric. The bronze panels pay tribute to, and detail his life and achievements.

One of the architects for the Westinghouse Memorial and surrounding area was the noted Henry Hornbostel, who also designed Soldiers and Sailors Memorial Hall and Museum, most of Carnegie Mellon’s original campus buildings, and Rodef Shalom Temple. Eric Fisher Wood is also credited. The monument pays homage to Westinghouse’s life and inventions. There is a statue of a schoolboy facing the main monument installations that represents “The Spirit of the American Youth,” who will draw inspiration from what Westinghouse achieved. Daniel Chester French (known for his statue of Abraham Lincoln at the Lincoln Memorial in Washington, D.C.) was the sculptor for the statue and the main panel, and Paul Fjelde designed the side panels. 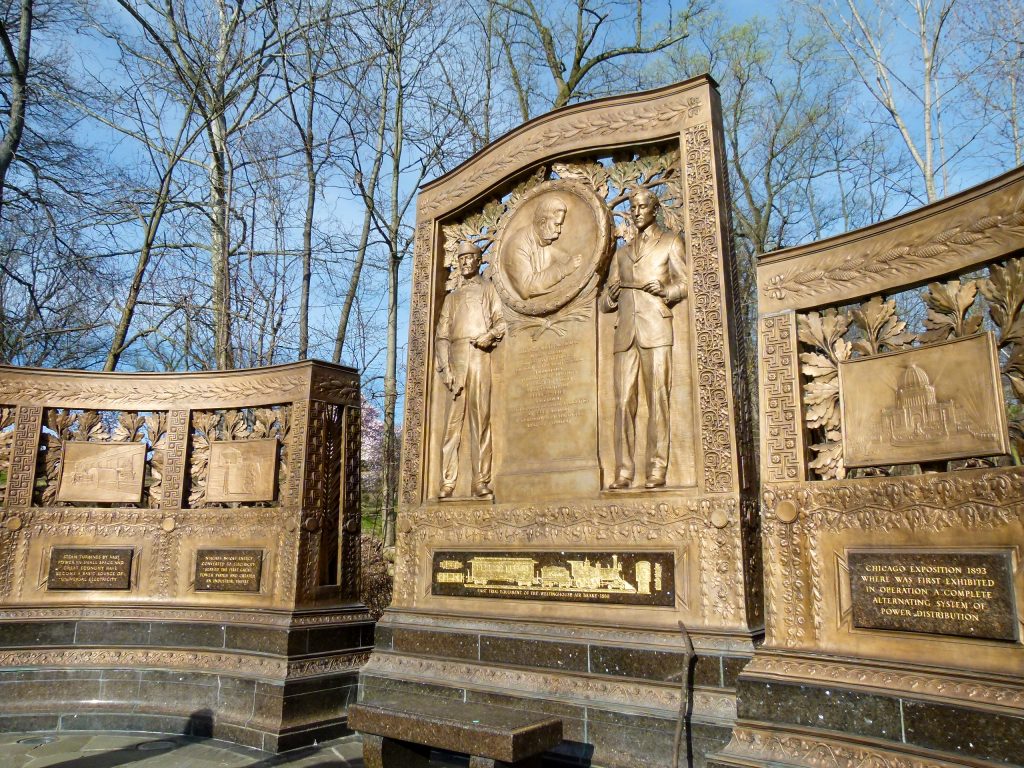 George Westinghouse died in 1914 at the age of 67. The memorial was paid for by workers at his companies and dedicated on his birthday, October 6, 1930. A huge ceremony was held with many Westinghouse workers there who were given the day off. Westinghouse’s rival Thomas Edison sent a letter of congratulations, as did President Herbert Hoover. The cherry trees surrounding the memorial were mainly donated by Westinghouse Society of Japan in 1931, with several others donated by Mitsubishi Electric in 1965. The memorial and lily pond had been degraded by age, vandals and weather, and a beautiful restoration was done to them in 2015-2016 by the Pittsburgh Parks Conservancy and the City of Pittsburgh.

While walking around the grounds of the memorial I spotted a small pit behind it. Intrigued, I went back to have a look. It is an impoundment used to catch water from a small stream that runs down into it. I was surprised to see the creek behind the monument and walked back on some large stone slabs that acted as steps for a while, into a nice little hidden valley. I have seen deer on the grounds near the monument at night and the stream may be one of their watering holes.

I went past the memorial more recently and the cherry trees were starting to lose their blossoms due to the wind, cold, and the fact that they are among the first blooms of spring. Not to worry, though; other trees and flowers are now blossoming, including daffodils. The Westinghouse Memorial is also beautiful at night with its architectural lighting. It’s a wonderful spot. We are very fortunate in Pittsburgh to have some fantastic parks and green spaces.

Photos and video by Rick Handler.