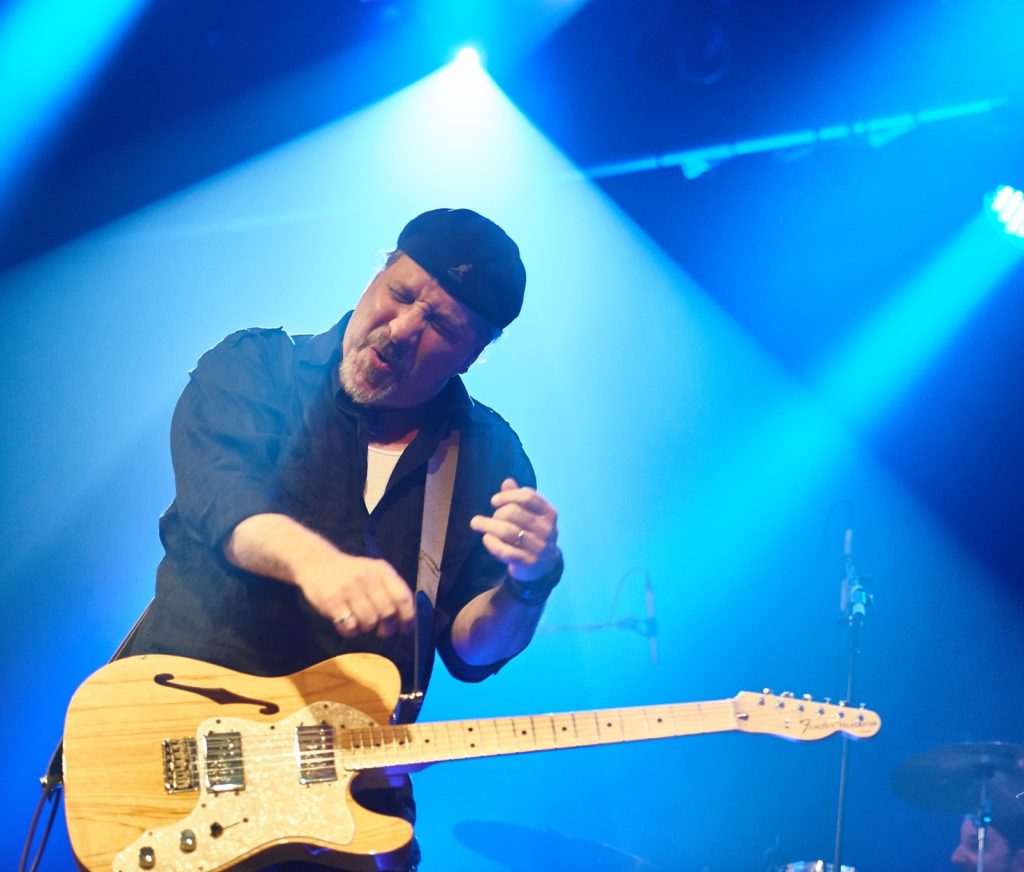 Like many musical performers as the pandemic grew increasingly drastic, Pittsburgh blues rocker Bill Toms became more and more dismayed as a cascade of performances were cancelled. Not having any shows on the schedule was a very unusual and unsettling new reality for him.

Toms put the time to good use though, having back surgery to repair a ruptured disc and working on material for his latest album, Keep Movin’ On. The album was released April 30 on Terraplane Records. It was recorded with his longtime band, Hard Rain, and his associates in the Soulville Horns.

Toms grew up in Mt. Oliver and then Scott Township. He and wife Joyce live in the Scott Township home he bought from his mom 25 years ago. Although music is his passion, he works as a welding and inspection subcontractor for U.S. Steel at the Clairton Coke Works. He has worked there for the past six years. The job gives Toms some flexibility which is helpful to him as a musical performer.

In a recent conversation with Entertainment Central, Toms said about Keep Movin’ On, “I’m very happy with it, very pleased with it. It was done a little bit differently because of the pandemic. It gave me a little bit more of a fresh approach to presenting my music. Usually we would all get in a room and start playing together. We had to actually start building tracks. So it gave me time at home to work on arrangements. We had the time and the freedom to do that whereas when you’re in the studio working you know you don’t want to be racking up the bills with studio time. This was a little bit of a fresher approach for me so I kind of embraced it.”

As to the overall concept of the album, Toms said,, “Keep Movin’ On was obviously written about me as an artist and a musician. I had a conversation with a friend of mine about a year ago, he’s a businessman, he was trying to show me some business opportunities, and I’m an artist, I don’t think nothing like that. So he was explaining all this stuff to me and he said why don’t you explain the music business to me. I started to explain to him how much we get paid, the hours, the travel, the this and the that. He listened for about a half an hour, and he put his pen down and looked at me and said ‘Why do you do this?’” Toms laughed as he told the story. He said that he couldn’t really explain to someone who doesn’t understand the creative process why you put up with certain things in search of your creativity, or why you would choose to do something creative instead of something that would make you more money.

Toms continued, “So that’s where it [Keep Movin’ On] started, and then just by being off I started to appreciate the fact of what I had for 40 years, always having a gig. Keep Movin’ On is more about not just the physical aspect of moving forward, but I think it’s the mental and emotional and the creative process. Just keep moving forward no matter what.

“There’s a great book out called The War of Art and the basic premise of this book is, would you write or create art if you were the last person on Earth? And it always comes back in my head, it’s just something that we do as artists. So I think that’s what the title of the song and a lot of the music is based around, this idea that just no matter what, you’re going to keep doing it.”

When asked how the writing and lyrics came about for the songs on Keep Movin’ On, Toms said, “I’m always writing. Sometimes you have spurts where the creative energy is high and then sometimes you slack off, but I’m always writing…whether it’s songs, poetry, or whatever. I love to manipulate words.” He continued, “My process is very simple: I get it when it’s coming. I don’t have a set way of doing things. I have a notebook and a guitar, that’s usually what happens. That’s how I go at it. A lot of times I’ll have different lyrics and little ideas that I’ve had sitting around for ages and then all of a sudden something pops up and they turn into songs.”

I asked Toms if the song “Everybody’s Talking” was meant to give everyone an uplift with going through the pandemic: “I think so, yeah, I think that’s pretty accurate. The song is based around the idea that a lot of times with social media people do a lot of talking and I always think actions speak louder than words. It’s a simple song and sometimes I think you need that and we needed that after what we’ve gone through,” Toms said. 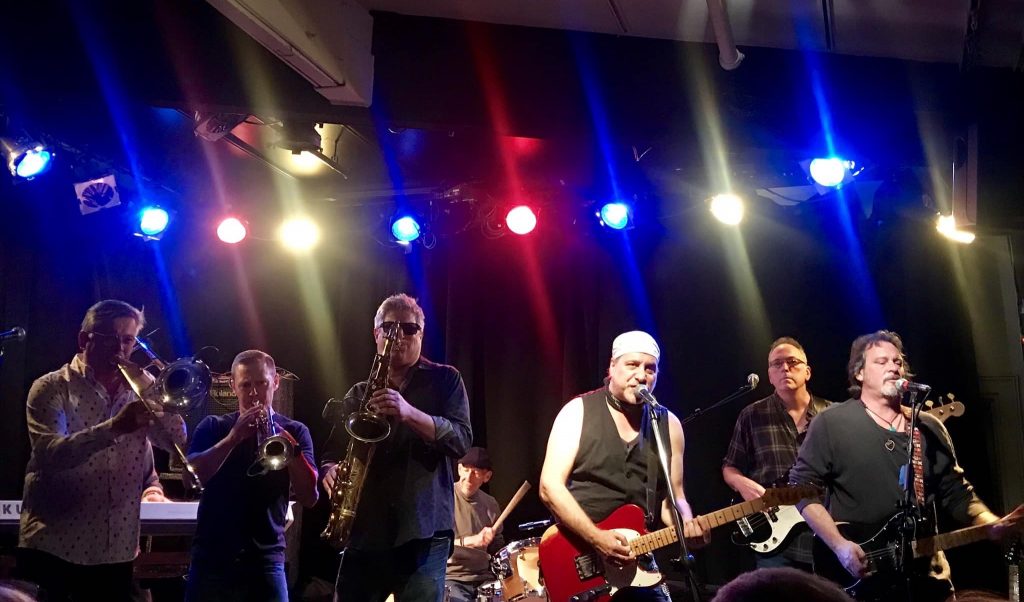 Collaborations Both Near and Far

Again on this album Toms works with longtime collaborators Will Kimbrough and Rick Witkowski. Kimbrough, a noted Nashville multi-instrumentalist, songwriter, and producer, contributed guitar parts on “I Keep Movin’ On” and “American Dreamer.” Toms mentioned that they both share some of the same musical sensibilities. Kimbrough, who grew up in Alabama, and Toms both love the old soul music from Muscle Shoals and Memphis.

Rick Witkowski, who has been producing top notch recordings in Pittsburgh for eons with his Studio L, has again crafted Toms’ new album. When asked what it was like to work with Witkowski, Toms replied, “Very easy. Ricky is one of my closest friends in the world, too, so that helps. It’s very comfortable and after all this time he’s pretty aware of what my strengths are and where that’s going to help and he also knows the weaknesses that I may need help on in certain places. So we work very well together. He’s very helpful, very talented too.”

Another contributor to Keep Movin’ On was Simone Masina, the Italian bass player in Toms’ European band. Yes, Toms has a European band which he tours with for a part of every year. The schedule is heavy with Italian shows. Unfortunately the last European tour had to be cancelled. How did Toms start a European band and European tour? Well, it began when he was an ace guitar player for Joe Grushecky and the Houserockers and they would go on European tours. He made friendships there with other musicians and music industry folks. When Toms first toured Europe on his own he played solo acoustic gigs, and that grew into having a full European band and booking agent.

Toms felt Masina’s playing style would work well. “When I wrote the song ‘Man’s Soul on Trial,’ I knew right away that that part needed to be a fretless bass. Something more melodic, more atmospheric. And he is really good at that, really a good upright bass player, fretless bass player. We had to cancel our tour and I wanted to get him involved a little bit and he has a studio there.”

All tracks of Keep Movin’ On were contributed digitally, with no performers being together. “We could embrace it,” Toms explained of the new process. The group was able to “build like a quilt” the overall musical scope Toms had envisioned.

Keep Movin’ On is a smooth, pleasing album both with its barn-burners and softer ballads. Toms writes about looking for hope, love, salvation, and one’s soul. He uses his voice as a fine instrument, turning up his blues rock growl when wanted and lowering down into a softer, finer register for the ballads. All songs are very interesting in their own right with fantastic arrangements and playing from Toms, Hard Rain, and the Soulville Horns. Every musician gets their time to shine in the spotlight. There’s not really a bad song on the album.

At the end of our interview I asked Toms what else he would like to say. “I’m very thankful for where I’m at. Thankful that we got through this pandemic, going into this thing with more appreciation for my music. After 40 years I’ve always had a gig coming up somewhere and then all of a sudden you take that away, you begin to realize that you don’t want to think you take it for granted, but maybe you do a little bit. It’s always going to be there. I’m more appreciative of anything, I don’t expect anything. I’m just more appreciative of anything you get to keep doing what I love and to the audience.”

Pittsburgh is also grateful that Toms’ has kept movin’ on and continues to be one of Pittsburgh’s top blues rock artists.

Toms and Hard Rain with the Soulville Horns recently played two sold-out shows in Columbus, Ohio and have tour dates set up around Western Pennsylvania in the coming months. Toms said they will also be adding performance dates in Cleveland, Durham, and on the East Coast. Saturday, May 22, Bill Toms and Hard Rain are playing an outdoor pavilion show at the Syria Mosque in Cheswick to celebrate the release of Keep Movin’ On. Special guest is the Aris Paul Band. MC of the event is Rob O’Friel from WYEP FM’s “Rollin’ and Tumblin’” show. 7:30 p.m. 1877 Shriners Way, Cheswick.