Last evening on the University of Pittsburgh and UPMC Medical Center campus a clinic was held by a distinguished laureate. No it wasn’t a medical clinic, it was a guitar clinic given by the Grammy Award-winning Jack White, and his highly skilled team of musical specialists. The Petersen Events Center was nearly sold out to see White and his crew in concert on their Supply Chain Issues Tour.

There was a stage on top of the main stage’s floor and was concealed behind a light blueberry colored, ruffled curtain. When it was almost time for Jack White to perform, a purple light on the stage riser came on. Then a few moments later some rock and roll music started emanating from behind the curtain and silhouettes of the band members performing flashed on the curtain. At that time the curtain lifted and Jack White and his band continued on with “Taking Me Back,” the incendiary rocker from his just released album, Fear of the Dawn.

The guitar-driven sound was atomic, fuzzy reverb with intense, melodic guitar and drums. White’s scalpel of choice for this rocker, and many other power songs of the concert, was a medium blue Telecaster with white pickguard and many small silver sparkles in the blue. White played the Tele with powerful up and down strokes for the song.

Drummer Daru Jones added to “Taking Me Back” with his strong, high drum strikes and periodic percussion accents. At one point White and keyboardist (and samples, and backing vocalist) Quincy McCrary traded off on matching chord progressions of the song. Dominic Davis kept the bass guitar line firm and flavorful. Many white strobe lights above and ringing the sides of the stage went off in strong pulsations during the song. There was also an all white statue that was at the rear of the stage. It was facing away from where I was sitting, but it looked like it was holding a small guitar or stringed instrument.

White had a one-foot high riser in front of his playing platform at the front of the stage which concealed his foot pedals and other effects instruments. At the platform White also had a Gretsch and two acoustics, all of which he played during the show.

Next up were two tracks from Fear of the Dawn—the title track and “The White Raven.” “Fear of the Dawn” was another with lots of fuzzy reverb sound. “The White Raven,” also a power rocker, featured several very interesting guitar lines, one slower, and the other uptempo. These were followed up by The White Stripes tune “Dead Leaves and the Dirty Ground.” White and his former wife Meg were The White Stripes.

He reached back to this catalog for many songs in the concert set list. Of those songs a few were especially interesting. “That Black Bat Licorice ” had black bats on the screen at the rear of the stage. “I Think I Smell a Rat” featured some Spanish flamenco-sounding guitar riffs at the beginning and at certain points throughout. “Fell in Love With a Girl” was a fun one too.

White slowed things down a little bit with the beautiful “Love Interruption” which saw him playing acoustic guitar and singing some pleasant vocal harmonies with McCreary. That tempo continued into “What’s Done is Done” which demonstrated that White is an accomplished piano player too. A cover of U2’s “Love is Blindness” kicked things back up.

Other main set highlights included “Temporary Ground” which sounded like a classic folk rock song and is about early explorers who really didn’t discover anything new. “Lazaretto,” the title track from White’s second solo album, had a bouncy funk, rock feel with distinctive guitar play that included a scorching run and powerful drumming.

With its distinctive bass guitar opening notes, Davis signaled that “Steady As She Goes” was about to start. Upon hearing those notes the crowd erupted with applause for the start of The Raconteurs’ (White’s other band) song. As White skillfully picked out the guitar notes and Davis kept it funky, Jones rocked the drum part which includes some extra notes and powerful fills. He has a big kit and used all the drums proficiently during his frenetic drumming throughout the night.

The crowd was dancing and enjoying the song about finding someone to settle down with and its complications. The line, “Settle for a girl, neither up or down / Sell it to the crowd that is gathered ’round,” seemed especially poignant as a crowd had gathered ‘round to hear him sing the song. After the tune ended, it was the end of the first set and Jones tossed one of his drum sticks to the audience.

After a few minutes and much applause White and the band returned to the stage for their encore. First up was the popular White Stripes’ song “Icky Thump” followed by “Sixteen Saltines.” Next was the distinctive White Stripes’ power rocker, “Seven Nation Army.” During the song the video screen showed a tiger roaming around. The audience clapped to the beat. The whole band jammed this song hard to bring the concert to a close. White tossed a guitar pick to the audience and Jones gave a drum stick to a person in the crowd.

White hadn’t much to say to the audience throughout the night besides a hello and asking the crowd if they were ready to go earlier in the concert. He preferred to keep the music flowing and there wasn’t much space between the songs. With 26 songs being played, the pace had to be somewhat quick. However at the end of the show Jack White thanked the crowd and said he hoped to see them again soon. The concert lasted approximately an hour and 45 minutes. It was a phone-free show. Phones were locked in a small bag and given to concert goers when they entered and the bag was unlocked before exiting.

Geese, a Brooklyn-based rock band opened for White and provided a fast paced set. It was their third and final night on the tour. 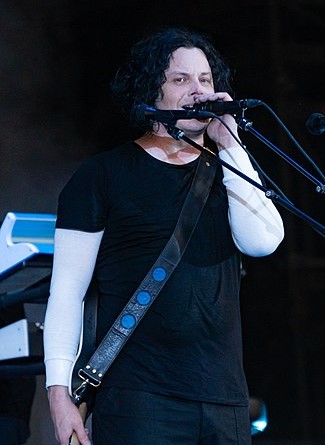 Jack White performing with his band at the 2018 Rock Werchter festival in Werchter, Belgium. (Photo: Raph_PH and Wikipedia)