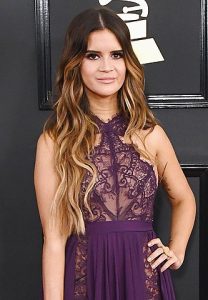 Maren Morris is an extremely talented pop/country singer/songwriter. As a young girl of 12 in Arlington, Texas her dad bought her a guitar and she hasn’t looked back since. Morris had good early success with several releases, then went to Nashville to write songs for other artists including Tim McGraw and Kelly Clarkson. Her first major label release, 2016’s Hero, achieved gold sales status. On March 8, Morris released her latest album, Girl. The LP broke the record for the largest streaming week for a country artist’s studio album by a woman. She has garnered ten Grammy Award nominations over the last three years, winning Best Country Solo Performance for “My Church” in 2017.

The sold-out crowd for Morris’ Thursday night’s stop on the Girl: The World Tour at Stage AE was mostly young women dressed in country cool and who were raring to go. Amanda Mickley, from the Slippery Rock area, explained why she is a big fan of Morris’, “She’s a very good role model for young women. Her voice is different, very soulful, almost Gospel-like at times.”

The lights dimmed and Morris’s band took the stage. The crowd looked in anticipation to see her come out from one of the wings of the stage, only she didn’t. She rose up on a small elevator from behind a large platform of risers. As her head started to emerge, the audience cheered and clapped its approval.

Morris opened strong with the title song “Girl” from her just released album of the same name. The song showcased her amazing vocal prowess. It also demonstrated how great of a band she has. Her versatile group (she introduced them at the concert, but it was hard to hear their exact names and I can’t find them named online) consists of a lead guitar player, female bass player, keyboards/multi instrumentalist, and drummer.

Morris was dressed in high cut denim shorts, pinkish-red top, both with some sequins, and sparkly silver knee-high boots. She adeptly played her white electric Les Paul guitar while singing.

Part of Morris’s appeal, aside from her melodic singing voice, is that in her songs she knows how to have fun and also to reassure. Her lyrics resonate with young women. Take for example these lines from the refrain of “Girl,” “Girl, won’t you stop your cryin’? / I know that you’re tryin’ / Everything’s gonna be okay / Baby girl, don’t you hang your head low / Don’t you lose your halo / Everyone’s gonna be okay / Baby girl.”

After the tune, Morris shouted out, What’s up Pittsburgh? How we doing tonight? Thanks so much for selling the show out tonight. After “The Feels” she led the band into “80s Mercedes” with the lyrics, “Pop the top down like a summer dream. She’s my teenage time machine.” At the rear of the stage a large video screen showed a colorized version of Morris tooling around in a ’80s Mercedes. Near the end of the song bubble machines at stage left and right blew bubbles into the air above the crowd. The crowd roared and clapped in a very loud and enthusiastic manner,

Next Morris strapped on an acoustic guitar and again thanked the crowd for selling out a Thursday night show. She added, “I haven’t been here since I was on the Sam Hunt tour two years ago. It’s good to be back in Pittsburgh. A lot of my new record was written on the back on my tour bus including this song “A Song for Everything.” It was a lovely ballad. She then went into “Common,” a song she recorded with Brandi Carlile and is from Girl. “Common” featured some strong vocals from Morris, who sunk down to her knees while singing part of the song.

For the song “All My Favorite People,” RaeLynn (of Baytown, Texas), who opened for Morris, returned to the stage for a rowdy duet. It was like a fun Texas Two-step of musical estrogen. Morris, RaeLynn and the guitarists all lined up together and jammed at center stage.

“I could Use a Love Song” saw a cello being played on the stage. For “Make Out With Me” Morris laid down on the riser steps and started singing. “Gold Love” had great keyboards, guitar, drums, bass, and vocals. All cylinders were firing.

On “Great Ones” Morris said, “Alright Pittsburgh, let’s do this” before leading the audience in a sing along. After the audience participated in a strong manner, not only singing, but dancing too, she said, “Pittsburgh you showed up tonight.”

Another fun tune that got the crowd rocking was “My Church.” The song is about the strong positive feelings that Morris gets while driving in her car and listening to songs on the radio. “Feels like the Holy Ghost running through ya / When I play the highway FM / I find my soul revival” are several of the verses from the song. In the song she draws inspiration from the likes of Johnny Cash and Hank Williams.

Morris closed the show with “The Middle,” a huge hit she collaborated on with Zedd and Grey. It is a relatively simple, repetitive song, but one with a monster melodic hook. Morris and the audience not only met in “the middle,” they went all in for each other. The crowd loved the song and it capped off a wonderful night of music from Morris and opener RaeLynn. Morris played just about every song from her new Girl release.

Maren Morris has achieved good success for several different reasons. Her voice is beautiful to listen to and she can do a wide range of songs in different genres—pop, country, soul,. Her songs are well crafted and can be very meaningful or just downright fun. Morris isn’t afraid to show herself as vulnerable, either in her lyrics or in the tales she tells. The flip side of that is her confidence remains strong in spite of any moments of doubt or bad feelings. Morris also seems very nice and humble. Another big factor is that the music is authentic, not overly processed. This could be the year of the Girl.

Morris has joined together with Brandi Carlile and Amanda Shires to form a female super-group that is called the Highwomen (in reference to The Highwaymen). There will be a fourth position in the band that will be filled by a rotating line-up of special guests. The group is currently working on several new songs and had their debut recently at a Loretta Lynn tribute concert.