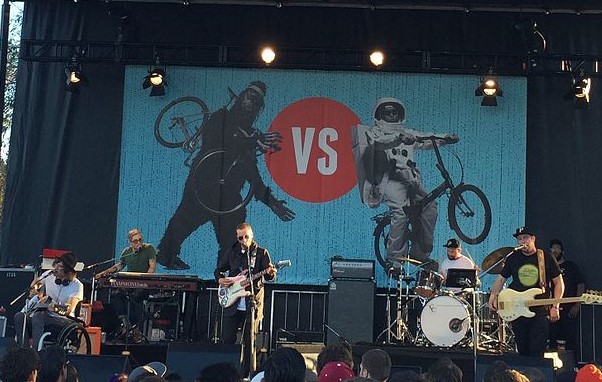 Portugal. The Man performing in 2016 at the Cliff Bar Cyclescramble in San Rafael, California. Photo: Trevor Bolliger and Wikipedia.

Portugal. The Man embraced and poked fun at its newfound celebrity Tuesday night at Stage AE with a tight, albeit jocular, set.

The push/pull began with the music video for “Feel It Still” projected onto a screen behind the stage. The song, from 2017’s Woodstock, was the band’s breakout hit last summer.

The video was interrupted by cartoon icons Beavis and Butt-Head, who were watching it from a couch in a living room. Beavis laughed at co-founder and guitarist John Gourley’s hipster moustache. But the video grew on Butt-Head, who proclaimed Portugal. The Man “the greatest band that ever walked the Earth.” (The pair often lampooned music videos, for songs such as “Ice Ice Baby” and “Man in the Box,” during their eponymous MTV series.)

The video cut off, and each member came on stage. Their band uniform was jeans, a T-shirt, and a baseball cap. They quickly proved their mettle with a one-two-knockout medley of Metallica’s “For Whom the Bell Tolls” and Pink Floyd’s “Another Brick in the Wall (Part 2).” Jason Sechrist, stage left, accented each song with his thunderous drumming.

The words “Purple Yellow Red and Blue” appeared on the screen to announce the first full original song of the concert. Kyle O’Quin, stage right, highlighted the number with some neo-classical keyboard flourishes. Throughout the concert, his keyboard and synthesizer were never buried in the mix—impressive, considering the two guitarists and bassist in front of him.

He, Gourley, and guitarist Eric Howk harmonized beautifully on the next song, “Number One.” Then Gourley proved he could hold his own with “Live in the Moment,” which saw his tenor front and center, even if his lyrics were slightly hard to decipher over the music.

The sentence “Let’s Get Weird” was projected behind the band. They then launched into the retro-Motown pop of “Feel It Still,” which had the audience—mostly teens and twenty-somethings plus some parent and children combinations—grooving and singing along. As Gourley sang lead, the band showed why the song was a mega-hit with Sechrist’s powerful drumming and Carothers’s bass providing a solid foundation for Howk’s guitar and O’Quin’s keyboard. The group has been playing its biggest tune early for each show of this tour, but for those at Stage AE who thought it came and went too quickly, it would soon return.

For now, Portugal. The Man transitioned into the driving “Creep in a T-Shirt” (from 2013’s Evil Friends) before playing some songs with a slightly political bent: T.Rex’s glam-rock “Children of the Revolution,” their deep cut “Atomic Man” (with a snippet of the Rolling Stones’ “Gimme Shelter”), and “Noise Pollution.”

This last song was released shortly after the 2016 election and began by despairing (“Let’s leave behind this dry land / Crawl back to the ocean) and finished on the side of hope (“Even when the world has it out for me / I’m still feeling magnifique”).

The closest the band got to a ballad was “Modern Jesus,” and it still rocked as did a medley that started with “All Your Light (Times Like These)” and ended with an instrumental of the Beatles’ brilliant dalliance into prog-rock, “I Want You (She’s So Heavy).” Carothers thumbed his bass, and Howk showed off his chops with a grungy guitar solo.

They went for the “Feel It Still” hat-trick (if you count the music video) when they brought a woman named Laura from backstage to cover it with them. No explanation was given by Gourley, other than they had met her today, she wanted to sing, so they let her sing. The audience definitely thought she passed the audition, and she thanked them.

The band played two more songs, followed by a brief encore break, and then “People Say” to end it, but not before Carothers thanked both Pittsburgh and opener Jack Harlow.

The band members didn’t banter too much during the show. Rather, they let the screen do the talking with the aforementioned sentences plus other non sequiturs, such as “Kanye Is Broke.” Psychedelic patterns and dancing 3D-animated humanoids rounded out the visual effects nicely. It should be noted too that this was to be an outdoor show, but it was moved inside due to inclement weather. Neither the audience nor the band seemed to mind.

If Harlow didn’t win over the audience with his raps, then he did with his declarations, such as “I’ve been a Steelers fan my whole life” and “I want a Clemente jersey.”

Portugal. The Man, meanwhile, appeased those who were there just to hear “Feel It Still.” They also slipped in some jams and deep cuts for the diehard fans. It’s a balance that sustained this show and hopefully the ones ahead.

Christopher Maggio is a Pittsburgh-based writer and editor.