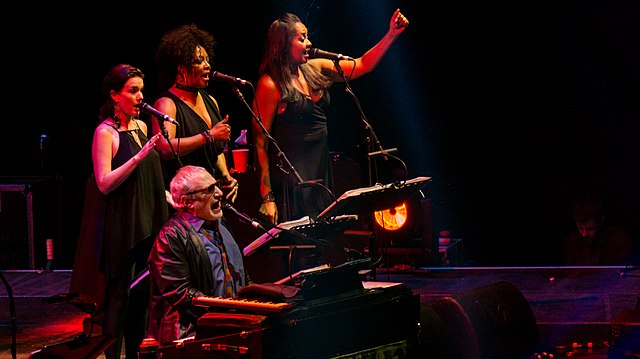 Donald Fagen of Steely Dan at the keyboards during a 2017 concert. (Photo: Raph_PH and Wikipedia).

A very enthusiastic  throng of Steely Dan fans packed Heinz Hall to see the band in a Monday night concert. This is their first Pittsburgh appearance since the death of founding member and guitarist Walter Becker in September of 2017.

Becker and keyboardist/vocalist Donald Fagen, first met at their “old school,” Bard College, in Annandale-on-Hudson, New York, where they were both students. Reportedly, Fagen was walking past a cafe when he heard someone practicing the guitar, enthralled with the sound, he stopped to introduce himself, and a musical partnership was formed.

The group took the stage and started playing an intro song, “Hallelujah Time” by “Brother” Jack McDuff. After the song, Fagen strode onstage to thunderous applause and sat at his keyboards and mic, which were set up near the front and center of the stage. Fagen and band opened up with “Bodhisattva,” then “Hey Nineteen,” one of their last big hits and from 1980’s Gaucho. When Fagen came to the lyric about “‘Retha Franklin” he emphasized her name which the audience noted and applauded.

Fagen, dressed in black pants, sunglasses, and a blue long-sleeved shirt draped unbuttoned over a colored T-Shirt, told the crowd, “It’s great to be back in Pittsburgh.” A little later he encouraged the audience to “Sit back and relax. Have a good time and think of this as a haven from the news.” Next the band performed “Black Friday.”

A lot of Steely Dan’s music is like a very delicious layer cake; It tastes wonderful and seamless as a whole, but if you listen closely you can hear that the overall sound is made up of multiple layers of rich ingredients. The sound is built upon Fagen’s very talented keyboard playing and lead vocals; the other layers include strong lead guitar, bass, drums, brass, more keys, and melodic background vocalists. And the group has always employed the best musicians, going back to their first work with ABC Records, when the band and producers went outside the ABC session players to build a team of the highest quality. Steely Dan’s sound lives in the space between rock, jazz, and R&B. The songwriting and lyrical descriptions are always top-notch as well.

I have seen Steely Dan twice before, and what I realized from seeing them in the more intimate confines of Heinz Hall is how outstanding their drumming is as well. Most of the band’s drum parts are an exotic hybrid mix of rock and jazz drumming. Carlock played many complex drum rolls and fills, sometimes at a frenetic pace, utilizing every part of his kit.

Next the band took off on a two song run from their ‘77 release Aja, which reached No. 5 on the charts within three weeks and was one of the first American albums to reach Platinum status. It won the Grammy Award for Engineer – Best Engineered Recording – Non-Classical. First up the group played the lush sounding title track, “Aja.” This song may be their most complex and musically satisfying song. All parts of the band blended together wonderfully to great effect as they went through the many tempo changes of the song. During the song Fagen got up and moved around the stage while playing a melodica.“Black Cow” followed with its outstanding key and horn arrangements.

“Time Out of Mind” continued the set with everyone sounding in fine form. Next up was “Kid Charlemagne,” from Royal Scam, an uptempo rocker with great guitar, keys and drums. The Steely Dan party continued with “Green Earrings,” which featured a big sax part both literally and figuratively, and the band’s biggest hit “Rikki Don’t Lose that Number.” “Rikki” was heavily driven by the lead guitar of Herington, who looked to be playing mostly a Melancon and a red and yellow Gibson during the various songs of the night.

Fagen introduced the next song as having been sung originally by David Palmer and that it would be sung now by the Danettes. Each of the Danettes took turns on the lead parts and turned the song nicely into a more soulful rendition. There were some interesting horn parts in the song including a muted trumpet feature. For “The Goodbye Look,” Fagen said it was from his 1981 solo record The Nightfly, which they would be playing in its entirety at some upcoming shows at New York’s Beacon Theatre and they needed to practice it. After the song, he smiled and told the crowd, ”We made a couple of mistakes.” The song sounded good though with some vibraphone sounds and heavy drum parts.

Fagen led Steely Dan into “Peg,” a very big hit from Aja, that ties “Hey Nineteen” and “Rikki Don’t Lose That Number” as the band’s longest charting hit song. Everyone had a chance to shine on this amazing tune. The song opened with strong horns riding on top of progressive keyboard parts. Fagen then came in with the great vocals, “I’ve seen your picture/Your name in lights above it/This is your big debut/It’s like a dream come true.” Fantastic guitar runs, funky bass lines, crisp drum beats, and a recurring sax part all added to the songs excitement. Then you have the Danettes harmonically blasting out the refrain of “Peg” (originally sung by Michael McDonald). The crowd was loving it and gave Fagen and band a loud and sustained round of applause. Fagen replied, “Thanks, you’re fantastic!”

The band played The Crusader’s song “Keep That Same Old Feeling” as Fagen walked off the stage for a mini break. During the song bandmates introduced one another to the audience. After the song he returned to play “Josie,” another classic hit that Aja spawned. Fagen led into the song with a nice keyboard part. “Josie” has a funky, almost reggae-like beat to it in some parts and that got some people up and dancing.

The first set closed out with the popular early song “My Old School” from their 1973 release, Countdown to Ecstasy. The song is based on a drug bust at their college (Bard) involving Fagen, Becker, and several other students when a female student inadvertently tipped off the local prosecutor who so happened to be a pre-Watergate, G. Gordon Liddy. Fagen sounded good on the keys and vocals as Harrington played some killer guitar riffs with the rest of the group supporting in strong fashion. Fagen encouraged the audience to clap along to the song and many people did.

Fagen and the band walked offstage to loud cheering and clapping which continued for about four or five minutes until the band returned with Fagen following. He told the audience (in regards to their sustained applause and standing ovation), “You’re crazy.” They then launched into “Reelin’ In the Years” from 1972’s Can’t Buy a Thrill album. The song opened with strong lead guitar runs that continued through the song and also featured fine keyboard work and melodic vocals by Fagen. Near the end of the song Carlock did a remarkable five-minute drum solo.

After the song Fagen bid adieu to the audience and walked off the stage as the band played “A Man Ain’t Supposed to Cry” by Joe Williams. It would have been nice to have more than a one song encore, but that’s how Fagen’s doing the sets on this tour. However, I am pleased to report that Steely Dan is still performing at a very high level and that it was great to see them in concert again.

The opening act  was a fun jazz combo by the name of the Pat Bianchi Trio. The concert had an early start time of 7 p.m. and Steely Dan performed from approximately 8 to 9:30 p.m.  It was nice to leave a concert on the early side for a change, after all it was a Monday night.